You are here: Home / Featured / Now comes the Poodemic 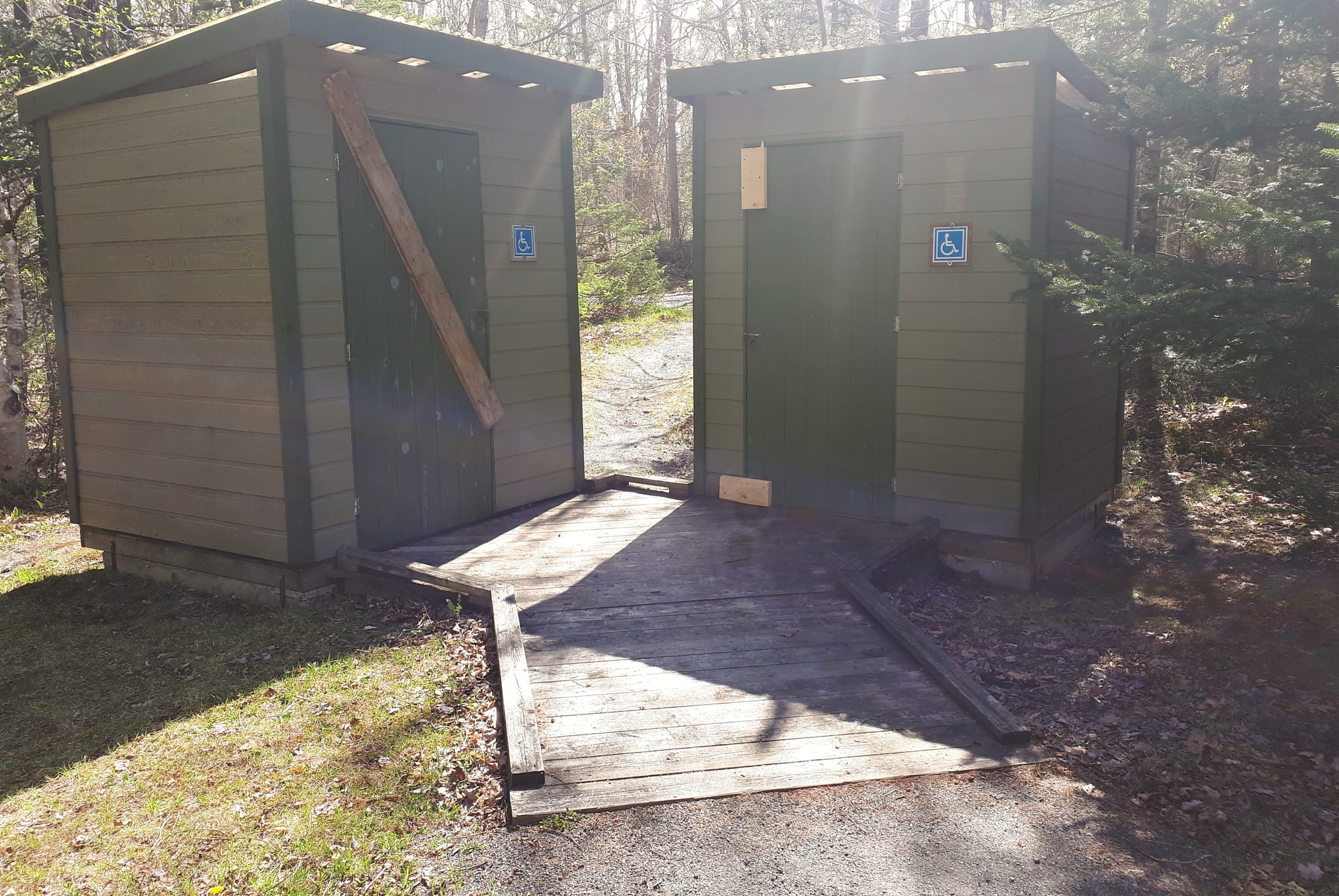 Paula Gardner was ready to hit the beach.

On May 17, two days after the provincial government announced beaches and provincial parks were open for day use — as long as you kept your distance, mind you — Gardner and her partner took an early-morning drive to Bayswater Beach.

“I am the kind of person who always pays attention to the bathrooms, because I have a very tiny bladder,” Gardner said. “As I was heading from the parking lot towards the beach I noticed right away that the bathrooms were closed. They had a big 2×4 across the door, and behind both the men’s and women’s outhouses were balls of toilet paper.”

Provincial parks and beaches may be open, but if you go, don’t expect to… go, if you know what I mean.

Provincial spokesperson Lisa M. Jarrett said in an emailed statement that “provincial parks, beaches and trails are open for public use at their own discretion; however, visitor services will remain very limited while we enhance public health measures.”

There is no timeline yet on when washrooms may open. Jarrett said, “We are currently looking at how to safely open services and facilities to the public. Our plan will include steps to keep staff and visitors safe, including extra cleaning of common facilities.”

If a park claims to be open but doesn’t have washroom facilities, is it really open? Lezlie Lowe doesn’t think so. 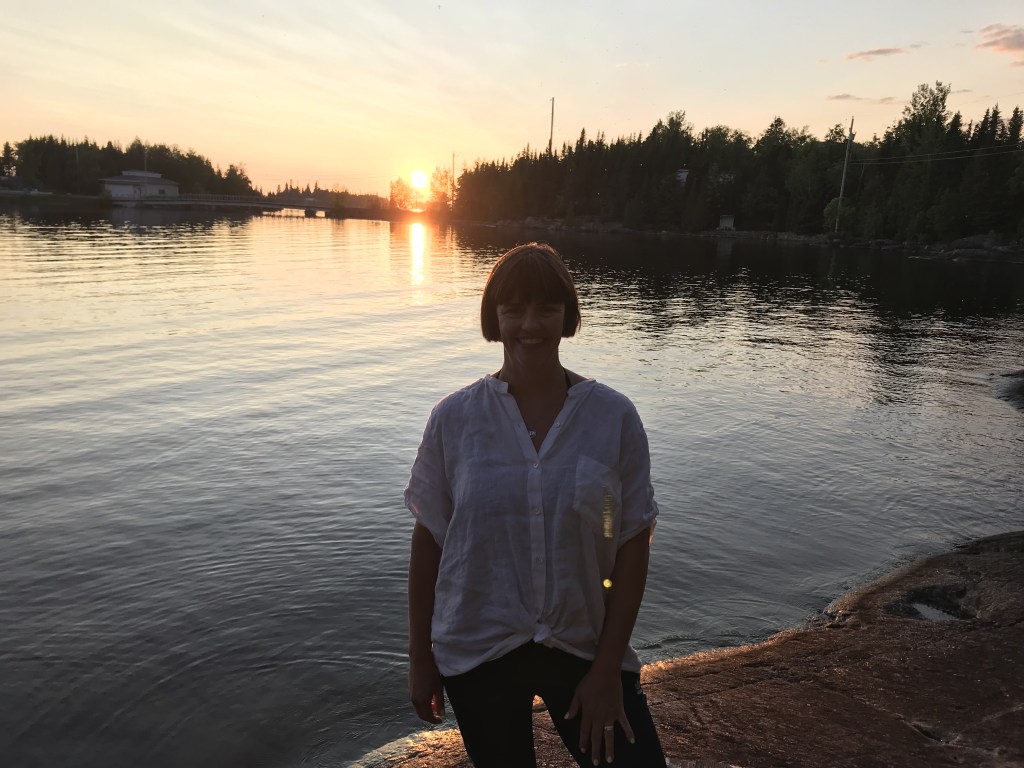 Lowe, the author of No Place To Go: How Public Toilets Fail Our Private Needs, said, “It’s a huge problem. If you’re saying the park is open, what you’re saying is people can come use the park. However, if you don’t provide facilities for people, what you’re essentially saying is the park is not open for everyone. The park is only open for people who can reliably predict that they can spend whatever amount of time they’re going to spend at the park without using the bathroom, which effectively means if you have a health condition like Crohn’s or colitis, then you can’t use the park… Lots of people have varying levels of need, and if we do not provide for that need, we’re essentially saying you’re not welcome.”

She added, “I don’t think that’s reasonable. I just don’t.“

Dartmouth resident Debra Burleson describes herself as “an active woman with a pretty ordinary 67-year-old bladder.” A former museum director and retired member of the Anglican clergy, Burleson said knowing that there are no public toilets available would be a “huge disincentive” to visiting a beach. With so many places closed, finding a place to go is already hard enough. Speaking from her car, while she was driving to Wolfville, Burleson said, “Part of my planning this drive is where am I going to go to the bathroom between here and Wolfville and getting back again. I have to think carefully about what my time window is, and where there is a washroom.”

She said she’d have to make the same kinds of calculations if she was going somewhere like the Rainbow Haven beach. “Particulary for older people and families with young children, it adds another layer of planning to something that should be so simple: Enjoying the outdoors.”

While the province is not providing amenities at provincial parks, other organizations are. Yesterday, Halifax announced it had installed two portable toilets (with hand-washing stations) in the plaza behind the Central Library, and washrooms are open at other facilities, including DeWolf Park.

Mike McFadden, chair of the Cole Harbour Parks and Trails Association, says facilities are open on the Salt Marsh Trail and Cole Harbour Heritage Trail. (Burleson bikes the trails and says the outhouses are “well-cared for.”)  While the trails are on provincially owned land, they are are operated and maintained by the volunteer-run non-profit association. There are currently two vault toilets available (“one-holers,” McFadden said) and another is under construction. 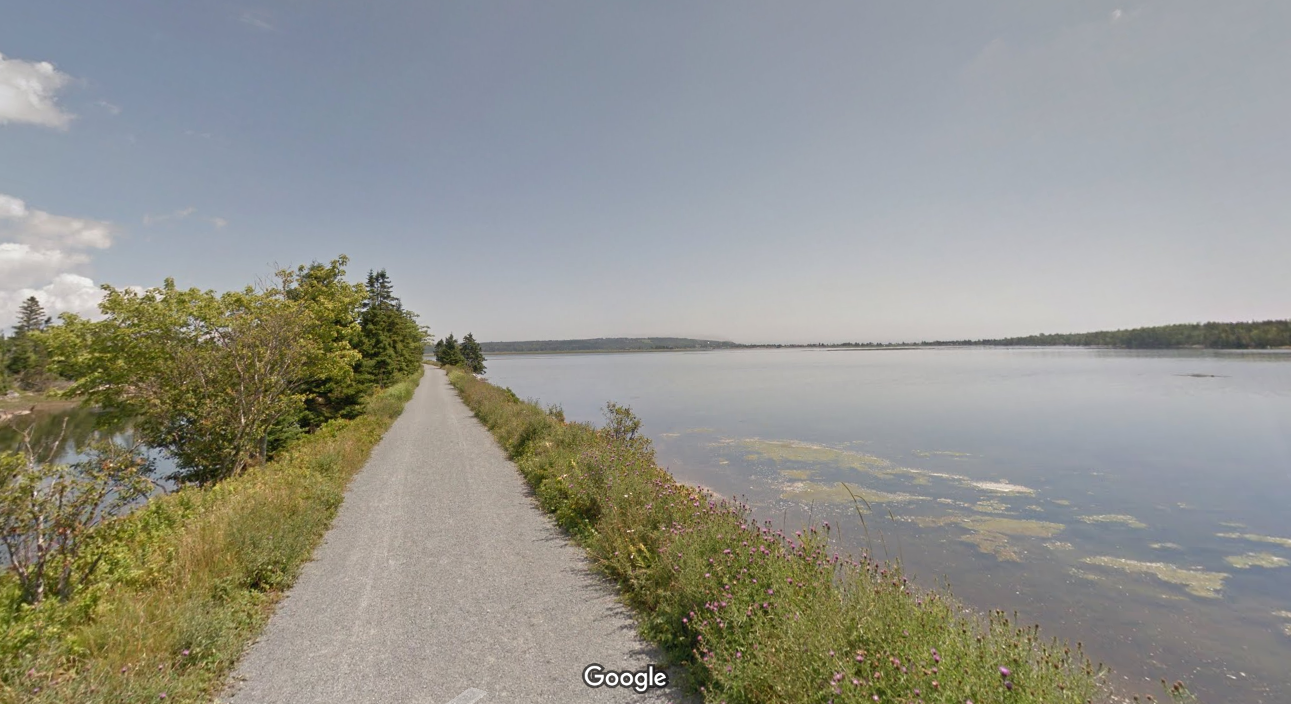 The toilets are outfitted with hand sanitizer, McFadden said, and cleaned twice a week. He said he has heard some visitors bring their own sanitizer and “splash it on the seat before they go.”

After Stephen McNeil announced parks were opening, McFadden said, “Within three quarters of an hour the parking lot at Bissett Road [one of the trailheads] was full. And that Sunday, which was a nice day, our counter counted 1,300. So trails are obviously very important… And if you’ve got to go, you’ve got to go.”

And if you’ve really got to go and there’s no toilet, you may have no choice but to go outdoors. 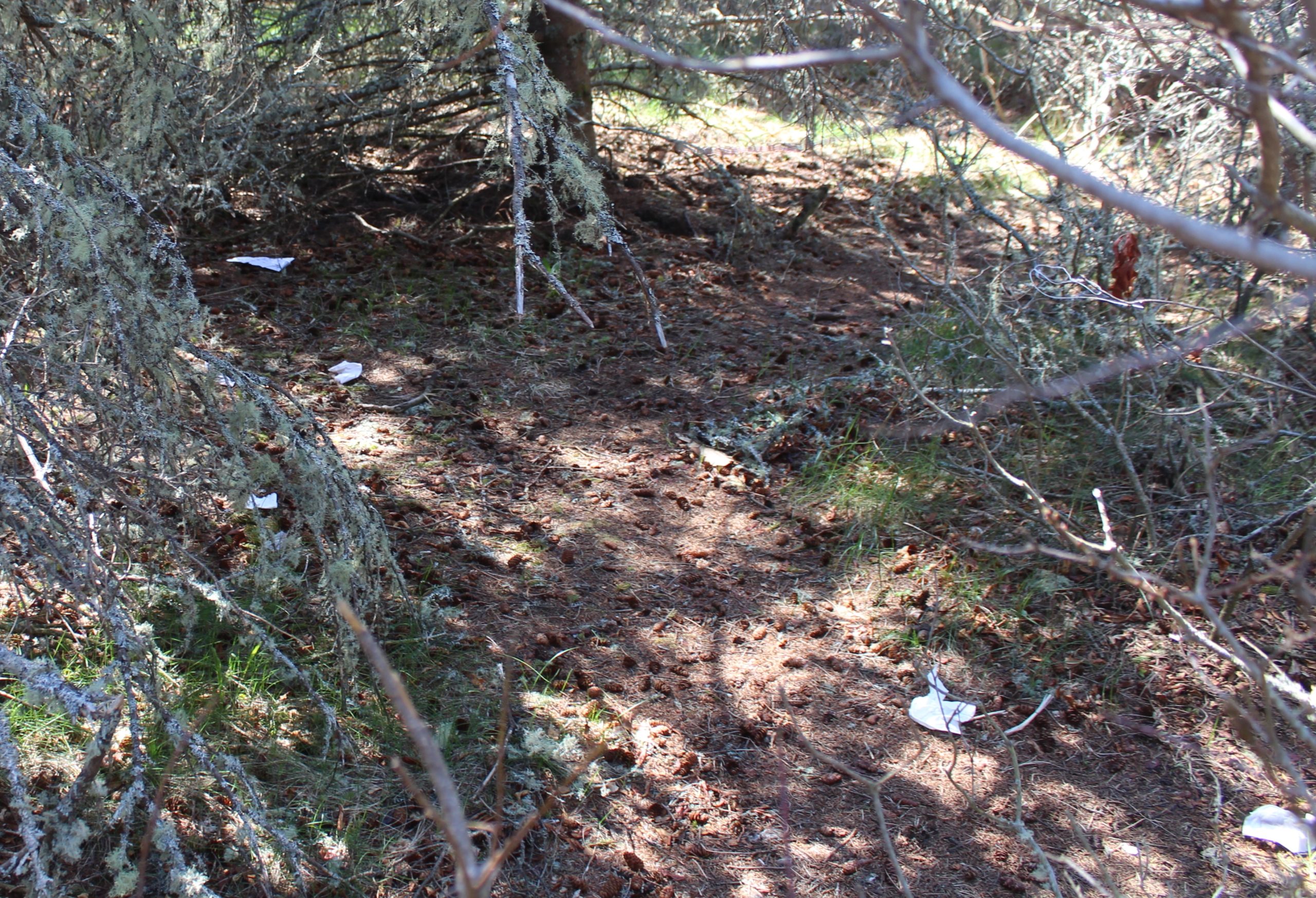 Halifax Examiner contributor Joan Baxter reports that last Thursday at Rainbow Haven she saw “a lot of people on the beach, and the people on the beach were making regular forays off the beach into the woods… We saw TP near the first parking lot, along the path towards the beach. Actually there was even some by the sign that amenities were closed. And where there is a boardwalk to the beach, there are nearby woods… Lots there too.”

And the town of Truro posted this on its Twitter feed yesterday, taking residents to task for leaving “unwanted gifts” while the Victoria Park washrooms are closed. 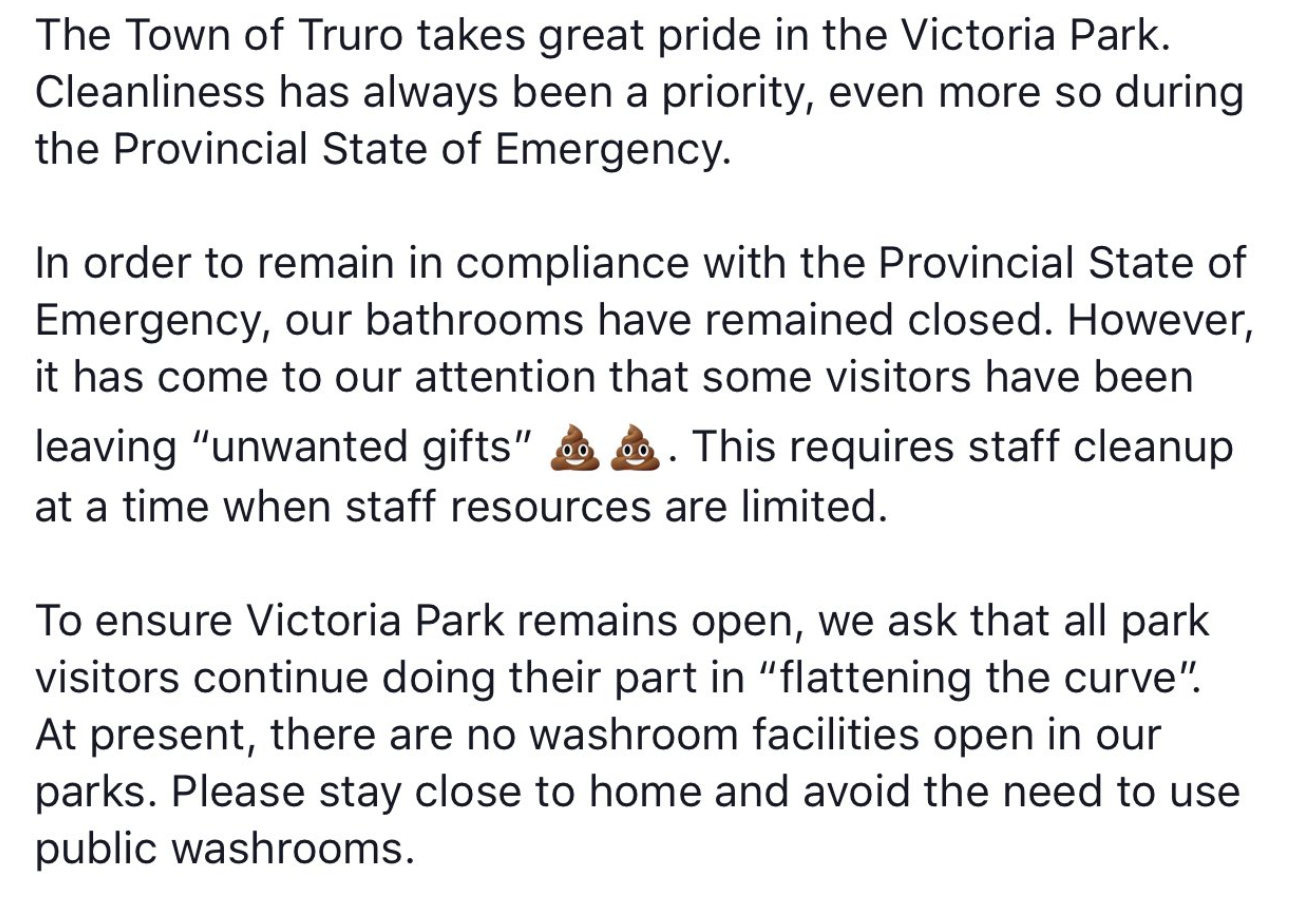 Poop emojis have made it to official town communications.

Gardner, who is a professor of public health at Brock University, was dismayed by the closed outhouses and al fresco elimination at Bayswater not only because of her bladder, but also from a public health perspective. 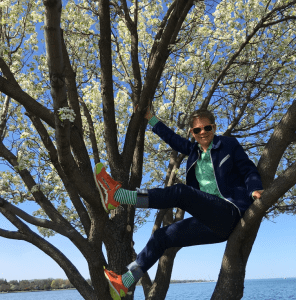 Back in 2014, Gardner co-authored a paper for the American Journal of Infection Control on the state of cleaning and disinfecting hospital wheelchairs so they don’t transmit disease. (Its subtitle was “That’s wheelie gross!”) She said, “We do know feces is a vector of transmission for all kinds other public health concerns. That’s why we have public toilets in the first place. To avoid that happening.” She wondered, “By keeping toilets closed to prevent this virus from spreading, are we doing more harm?”

“I just figure there are smart people who can figure this out,” she said. “Having some signage, some hand sanitizer inside and out. If it gets packed, they could do like grocery stores and have lines to remind us to stay apart. If the hand sanitizer is running low maybe there is a number you can text. I would totally do that. But I don’t think we can open beaches without opening public facilities.”

“Americans have always had a fear of contamination from public restrooms,” said [American Restroom Association president Steven] Soifer, who also is a professor of social work at the University of Mississippi. “What we’re seeing now is part just heightened anxiety, but it’s also part reality-based. Public restrooms in this country generally have open toilet seats — no lids — and high-pressure flushes create a plume of droplets that extends at least six feet.”

While there has been research on the role of “aerosol plumes” from flushed toilets and their contribution to infectious disease transmission, none of that matters when it comes to pit toilets. (You can also easily mitigate the problem by providing toilets with lids, and keeping the lids down when flushing.)

“An outhouse is effectively a single user toilet, which is quite safe during COVID, because it’s a respiratory illness,” Lowe said. “What we need to think about is shared air, confined space and high-touch surfaces. So in terms of an outhouse: Single user, perfect. There’s no concern about shared air… High touch could be an issue, but any outhouse should have some kind of hand sanitizer. There’s got to be something for hand hygiene. And that covers you for COVID. In any bathroom, you can touch the high touch surfaces. You just shouldn’t touch the door on the way out after you wash your hands properly, and you shouldn’t touch your face. And that’s basic infection control, which we should be practicing all the time.”

Closing bathrooms in parks is like eliminating all the ashtrays from the grounds of hospitals. People still smoke, but now they drop their butts on the ground. They still have to piss and shit, and now they’ll do that outside too.

“The concern is that if people are defecating in parks, kids can walk through it, get it on their feet. Then it gets into their cars and it gets into their houses. People can touch it inadvertently,” Lowe said. Think about a beach. Somebody goes on the beach, then someone else is building a sand castle, then they have a bag of chips or whatever, a can of pop, and then they touch their face. So that fecal-oral transmission is the big concern for defecation.”