You are here: Home / Featured / Nova Scotia’s mask requirement means a sigh of relief for one university town 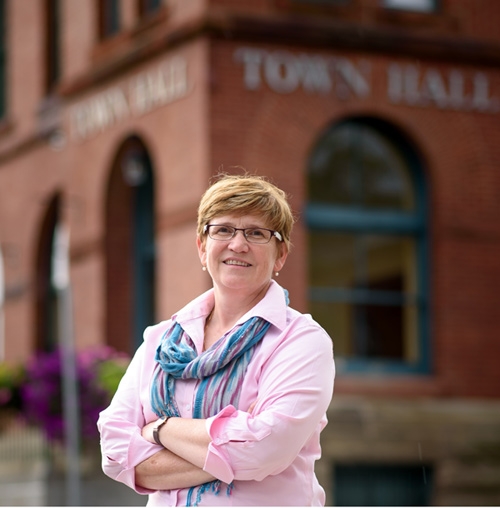 Laurie Boucher, the mayor of Antigonish

Laurie Boucher, the mayor of Antigonish, is breathing a little easier this week.

About 4,000 students — many from outside the Atlantic Bubble and possibly beyond the Canadian border — are expected to arrive at the centre of her town to attend St. Francis Xavier University just weeks from now. Last Thursday, Boucher told the Examiner she had received numerous calls and emails from citizens, and had instructed the town solicitor to investigate whether the Municipal Government Act would allow Antigonish to mandate the wearing of masks in stores, restaurants, and public buildings to reduce the spread of COVID-19.

“The underlying tone is that everyone has concerns about the students coming back — and not just students, but about the Bubble opening up,” said Boucher. “People are nervous and anxious, and that’s just a normal reaction. But as Dr. Strang and the Premier said, we do have to start learning to live with COVID-19 and therefore change our behaviour.”

Friday’s announcement by the Chief Medical Officer of Public Health removes that thorny decision from municipal councils. Dr. Robert Strang ordered all Nova Scotians, as of July 31, to “mask up” when in public or private buildings. That mandate should also help ease tensions between “town and gown” which had risen since the Public Health Agency of Canada began reporting spikes in COVID cases among people aged 20-34 as individual provinces and municipalities “opened up.”

Wolfville, Sydney, Church Point, and Halifax are also communities where universities are located, but the stakes may be higher in Antigonish. That’s because St. Francis Xavier University plans to deliver in-person instruction for 72% of its undergraduate programs. That’s a much higher percentage than other universities, which are providing more online courses and fewer face-to-face interactions.

Not surprisingly, 600 people from both the Town and County of Antigonish tuned into a Zoom information session hosted by the University on Wednesday, July 15. More than 100 questions were submitted to the university.

Wavering on the Waiver?

St.F.X. is conscious of the risks involved. The university recently made national headlines when student leaders called out the administration for sending students a waiver to sign. It would have released the university from any liability claims related to negligence or breach of its “duty of care,” including failing to “take reasonable steps to safeguard or protect” the student from COVID-19 risks. As previously reported by Michael Tutton of the Canadian Press, St.F.X. University president Andy Hakin had sent an email to the university community explaining the reason for the waiver.

“The university has been advised by our insurers that insurance companies will not provide coverage related to the pandemic by the end of the year,” Hakin wrote. “The waiver enables St.F.X. to proceed with plans to have students back on campus, including having students in residence and in-person academic delivery.”

Nova Scotia Advanced Education Minister Labi Kousoulis says the waiver that was originally presented to students will not be the same as the one they will sign. The University has indicated it is in the process of reviewing and changing the document.

The Return to School Plan

St.F.X.’s return to school plan came out in June and was developed in consultation with Public Health, the Nova Scotia Department of Labour and Advanced Education, and St. Martha’s Hospital. Classes will start September 14th.

St.F.X. will require students, faculty, and staff to wear masks during classes and pretty much at all times while on campus. All off-campus students will be required to submit a health and travel declaration form to Student Life prior to arriving to Antigonish and they will be required to check in upon arrival. The University has advised students that anyone who disrespects or breaks rules outlined in the Plan can be expelled.

“Now that the decision has been made by the Board of Governors at St.F.X. to open up and resume classes, it’s our role to make sure the Plan is followed,” said Boucher. “We will be on the task force with the university that will start to meet weekly. This also gives us an opportunity to meet with the University and the hospital (St.Martha’s) to bring the concerns of our citizens forward and make sure we have a voice at the table.” 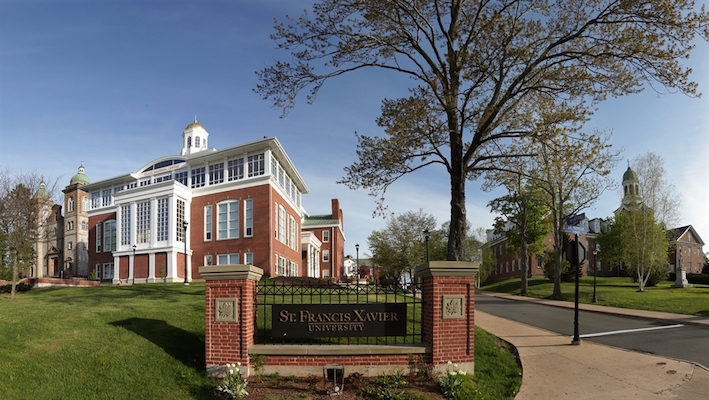 The university will take attendance at every in-person class. Residence rooms will no longer be shared, and fewer people will be permitted to share bathroom and kitchen areas. Some rooms must be reserved for monitoring students who exhibit COVID symptoms. If two or more staff or students have become symptomatic and have a known link to a location (e.g. they live in the same residence or attend the same class), St.F.X. is expected to notify Public Health.

Revenues generated by out-of-province students can’t be underestimated. According to the Association of Atlantic Universities, only tires and seafood generate more export revenue for Nova Scotia than the $886 million its 10 universities do. Each University must have systems in place to monitor international students if and when non-essential travel to Canada from the United States and other countries is permitted. These potential international students and non-Atlantic Canadian students must quarantine for 14 days upon arrival. (That could change if Nova Scotia expands the Atlantic Bubble to include the rest of Canada).

Despite some trepidation, the economic lifeblood of Antigonish depends on the money spent by university students, professors, and staff. Boucher says the town has offered to work with the university to help recruit volunteers who can deliver groceries and other supplies to students who will be essentially under house arrest while they self-isolate.

On a visit to downtown Antigonish two weeks ago, it was rare to see any shoppers wearing a mask. Many stores had plexiglass shields for cashiers, but few customers were covering their mouths and noses. The Sunflower Café, a health food store, and sporting good supplier Cleve’s are among the few outliers that  insist shoppers mask up. Back in June, Cleve’s store manager Brian MacDonald estimates he would get “pushback” from customers two or three times a day. “Now, I don’t hear it 2-3 times a week.” People are getting used to the idea, says MacDonald.

The change in provincial public health policy will take effect at the end of this week, July 31, when everyone who goes out will need a mask tucked in their purse or pocket to wear when they enter any type of building. Only preschool-aged children and people with certain medical conditions will be exempt.

Boucher had been planning to encourage mask-wearing through a public relations and social media campaign. Wearing masks won’t grant Antigonish immunity from this sneaky virus. But in the birthplace of the co-operative movement, the messaging from both the university and the town reflects an understanding they need to work together if they hope to keep the virus  from spreading once classes start.

“I don’t know if I want Antigonish to be labelled a case study,” said Boucher, “but I do want to be a leader in the province and across Canada. We do want to get this right. It’s imperative for the townspeople and the businesses and the landlords. Everybody has a stake in this.”