When Trisha Estabrooks heard her building was being sold, she immediately started looking for a new place.

The single mother of two pays $857 a month for a two-bedroom she’s lived in for five years — a virtually unattainable price in Halifax’s rental market. She expected to be renovicted, like so many other renters.

“There’s been a lot of disruption in housing and Halifax and I’m not immune to it, so when I heard the building was sold I was really, really nervous about it,” Estabrooks told reporters outside her apartment building on Crown Drive in Halifax on Wednesday. 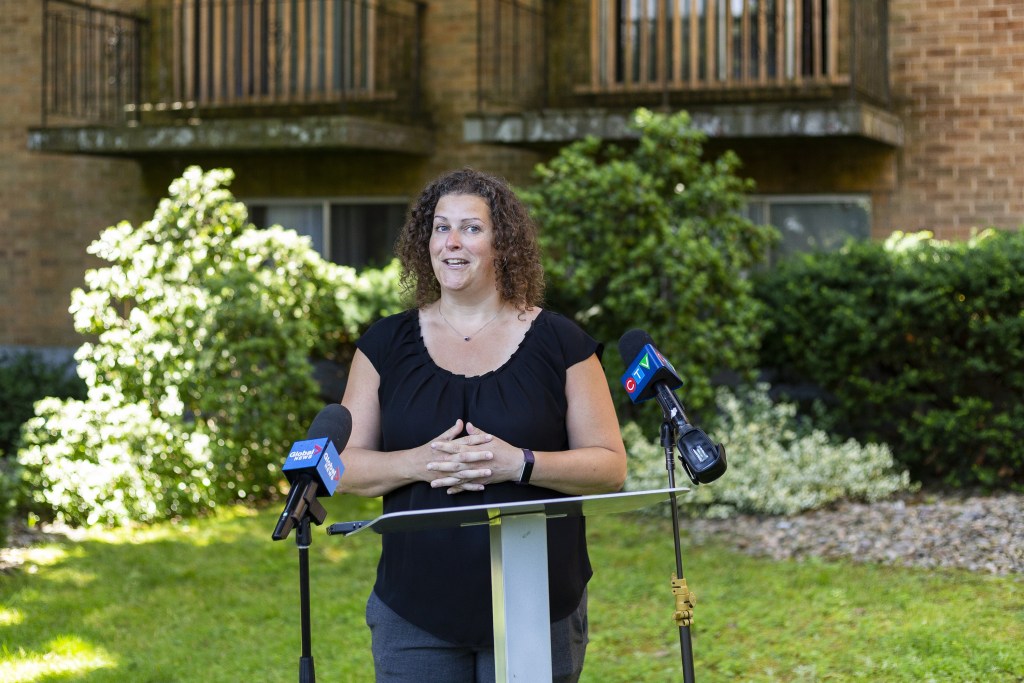 Trisha Estabrooks, a resident of the building behind her, speaks at an announcement in Halifax on Wednesday. Photo: Zane Woodford

“It’s hard … I reached out to a couple places and didn’t hear anything back. so I was basically sitting on my hands worrying.”

It was a relief when Estabrooks found out the buyer was the non-profit Housing Trust of Nova Scotia, and it plans to keep it affordable.

The building was one of five the Housing Trust acquired in a $30-million deal that includes 295 units. Two other buildings are in downtown Dartmouth, and two more are in Fairview. As the Halifax Examiner reported in May, the Housing Trust recently pivoted to buying existing homes rather than building. 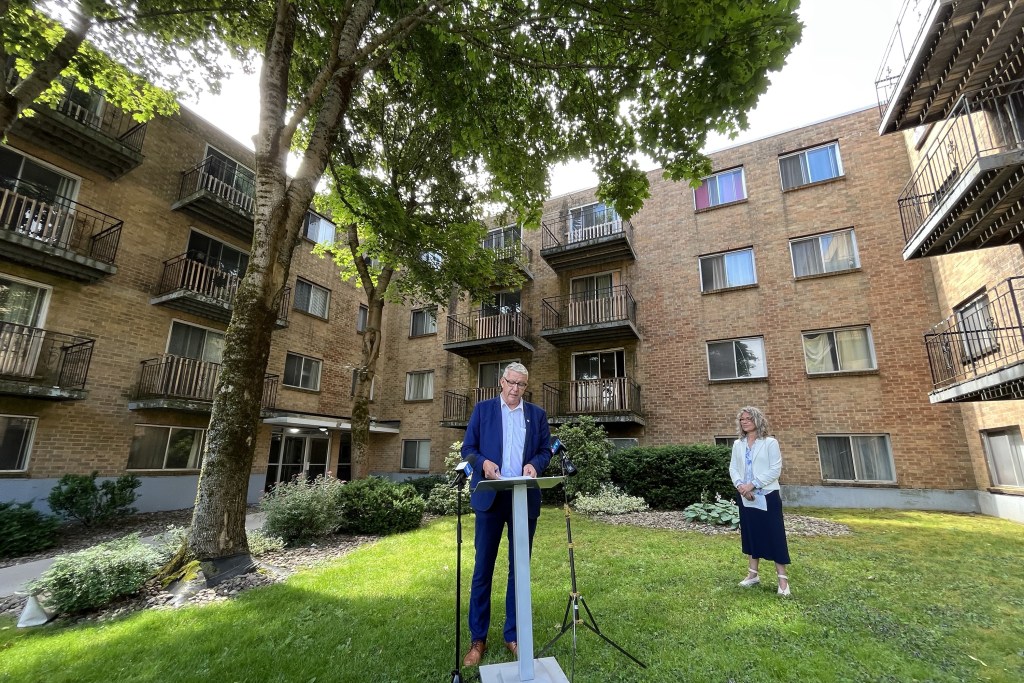 Municipal Affairs and Housing Minister John Lohr, joined by Angela Bishop of the Housing Trust of Nova Scotia, speaks at the announcement in Halifax on Wednesday. Photo: Zane Woodford

It’s an approach the provincial government sees value in, and it’s created a new mortgage program to support the purchase, and to help other nonprofits to do the same thing.

“Obviously we need new units too. There’s no one solution to the housing crisis, but this is a part of it,” Municipal Affairs and Housing Minister John Lohr said at the announcement on Wednesday.

“We’re very pleased to be helping the Housing Trust do this, and we want to work with other nonprofits around the province to do the same thing.” 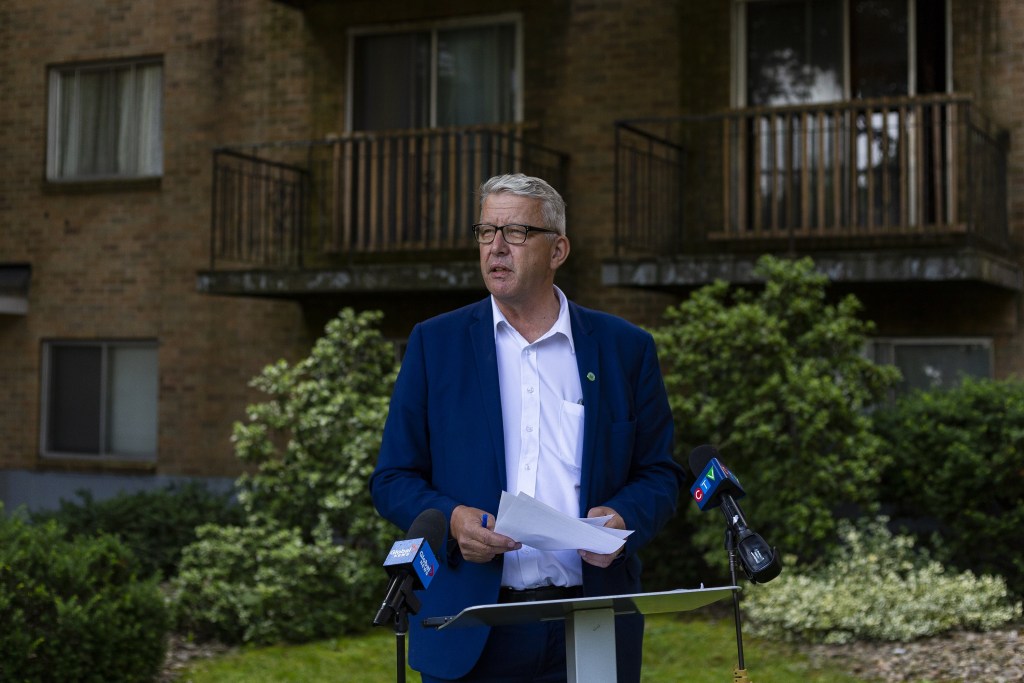 The new program, the Community Housing Acquisition Program (CHAP), provides nonprofits with up to $10 million in low-interest financing (at the provincial borrowing rate of prime plus 1%, Lohr said) toward the purchase of existing affordable housing, up to 95% of the sale price.

For supportive housing with funding from the Department of Community Services, the loan can cover 100% of the price, essentially a zero down payment mortgage.

The Housing Trust of Nova Scotia received a $5.6-million loan. Ross Cantwell, president of the trust, said it helped in getting the Bank of Montreal on board for a more substantial mortgage. 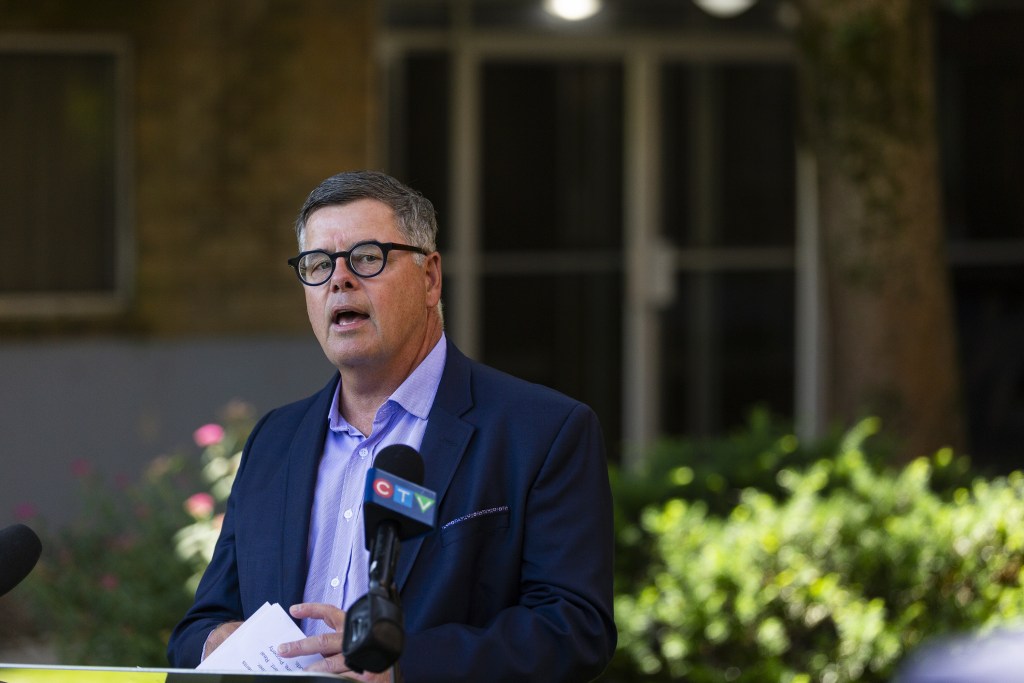 Cantwell said the loan program allows the nonprofit to compete for buildings coming on the market.

“We just need access to the resources. And so that’s the great thing about this CHAT program is it kind of levels the playing field for us,” Cantwell said.

Halifax pitched in too, with council approving a grant of $445,500 to offset the deed transfer tax on the properties — 1.5% due to HRM on any sale.

“We need new affordable housing, but with supply chain issues with labour challenges, with the interest rates, it’s becoming more and more unaffordable to build affordable,” Savage said. “So it makes it more important in my view that we maintain existing affordability.” 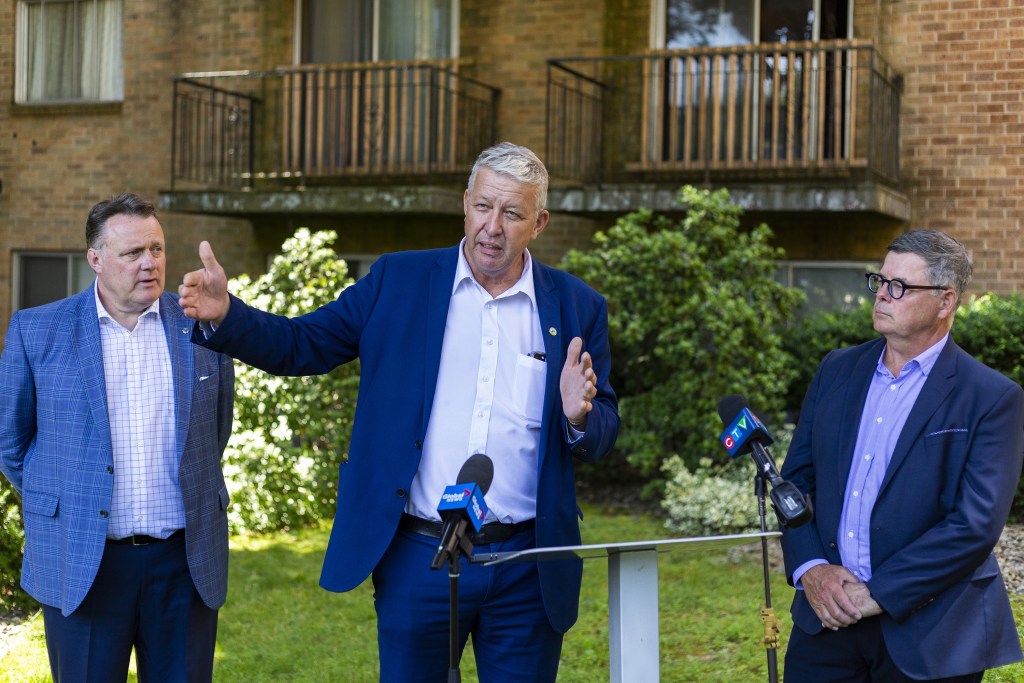 Some of the tenants have been in the building on Crown Drive for 30, 40 years.

“The Strug family, who sold us these buildings, I think they were quite pleased that they were able to sell to us because they owned these buildings over a long, long period of time. And you can’t help but build some relationships with some of the tenants. So I think for them, it was kind of a win-win,” Cantwell said.

It was their time to sell, and they were getting the same money that the private sector was offering to pay, yet we had a motive that was going to allow a lot of long-term residents, some of whom they knew, to stay. So I think there’s other families out there that that at some point in the lifecycle of owning a building, they’re ready to sell and we may be a great option for them.”

The plan is to maintain existing rents for now, and raise some rents later “through attrition,” Cantwell said.

When the Housing Trust was looking at a new build, the plan was to keep 50% of units affordable and charge market rent on the remaining 50%. With the lower cost of purchase, compared to a new build, Cantwell said that split is more like two thirds affordable to a third at market rent.

“The way we will rate ourselves in the future is how many have we been able to keep affordable? That is the goal, not maximizing profit,” Cantwell said.

The buildings are in need of some work. For instance, the balconies on the Crown Drive building are unsafe and blocked off. Work on all 295 units will take about three years and $15 million, Cantwell said.

“The first step right now is we’re working with architects and engineers and going through assessments, and we’re trying to figure out what the battle plan is,” he said.

Cantwell said he’d like to grow the trust’s portfolio to 1,000 units in the next five to seven years.