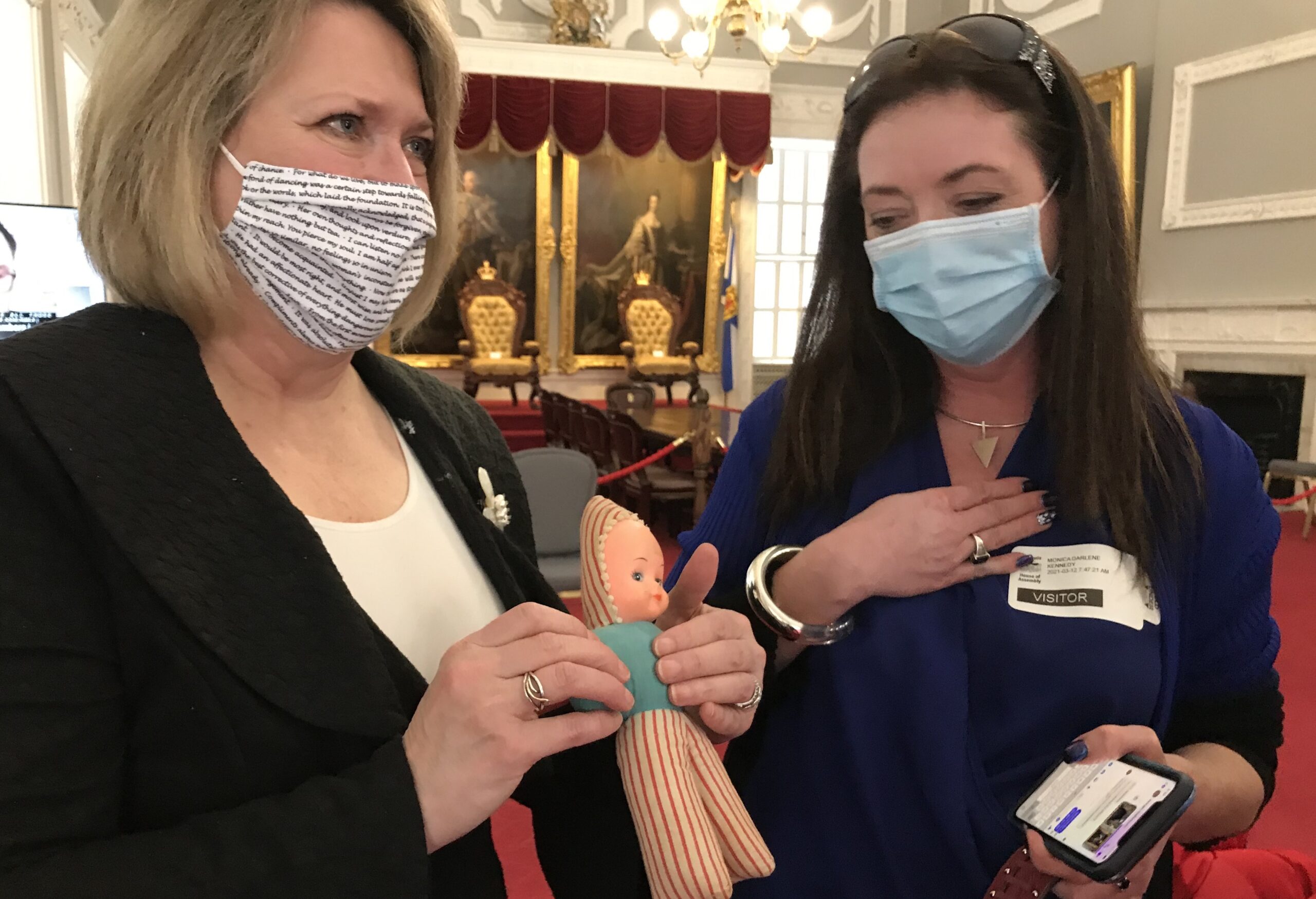 Community Services Minister Kelly Regan (left) with Monica Kennedy, adult adoptee. Regan is holding a doll named “Darlene” which was the only possession Kennedy had when she was adopted by a N.S.family at age 2. “Darlene” turned out to be Monica’s original middle name before it was changed by her adoptive family.” Photo: Jennifer Henderson

“We took a massive leap forward today,” a jubilant Scott Pyke told journalists today after Community Services Minister Kelly Regan tabled legislation to make it easier for adopted children and birth parents to find each other.

Nova Scotia is the last province in Canada to open up adoption records that had allowed birth parents an automatic veto forbidding sharing their names or other identifying information with adult adoptees or potential siblings who were searching.

“This is something adoptees have been pushing for for many, many years and to see these changes take place, it’s life-changing for many people,” said Pyke. “There is always a part of you that seems to be a little bit missing or foggy when you are adopted, so having this open up in such an amazing way will add a part back in everyone’s lives.”

In 2019 Pyke founded the Nova Scotia Adoptee Advocacy group on Facebook after he got impatient waiting for the government to disclose his adoption papers. He turned to Ancestry.ca and DNA testing which helped him find his birth father. Pyke believes the new legislation — an Act to Open Adoption Records in Nova Scotia — will assist thousands of people seeking medical or cultural or personal information about their origins.

In fact, Nova Scotia has nearly 32,000 adoption records dating back 70 years. When Nova Scotia finally implements these changes in April 2022, it is on the basis of what thousands of people told an online survey and public consultation process back in 2019. Some 82% of respondents indicated they felt the current law does not provide enough access to identifying information.

The new legislation provides the opportunity for significantly more disclosure of adoption records than has been available in the past. Prior to 1960, many adoption records did not contain the name of the birth father. The new legislation broadens the definition of “father” to include “potential birth father” where there may be credible evidence of paternity or the name is on the record. It also expands the definition of who can be considered a “relative” and it will allow adopted persons to access their records if they were “children in care” of Community Services.

“Simply put, we are reversing the onus just as we did with the Organ Donation Act,” said Community Services Minister Kelly Regan. “Consent is presumed but parties to an adoption can opt out. I’m absolutely aware that this is a sensitive and deeply personal matter. I believe the Act being introduced today strikes the right balance between those who want open adoption records and those who want to maintain their privacy.”

Here’s how the system will work. After the changes to the law are advertised, birth parents and adult adoptees (over age 19) will have six months to decide whether they will sign a contact notice or a disclosure veto. Everyone involved in a past adoption must confirm.

A contact notice allows someone to share their name and medical/identifying information to the person who is searching, on the condition that there be no contact between the two people. This is a change from what was contained in the previous,25-year-old legislation.

A disclosure veto states that a birth parent or adult adoptee does not consent to sharing their name or any identifying information with the other party. This can be changed at any time and a disclosure veto will expire upon a person’s death.

These measures to protect privacy apply to both past adoptions and adoptions in the future. This makes Nova Scotia different from other Canadian provinces. None have disclosure vetoes for adoptions taking place going forward, after legislation was passed to unseal adoption records.

Regan acknowledged “times have changed” but defended the decision to make future adoptions subject to disclosure vetoes. Regan said nearly two-thirds of the people who participated in the consultation answered “yes” to a question asking if all adoptions — past and future — should receive the same treatment. The Community Services Department interprets that as support for continuing privacy protection. (Others may take issue with this interpretation during the Law Amendments process).

Regan suggested there could be significant and personal reasons where people involved in a future adoption would want a veto to prevent the disclosure of identifying information. 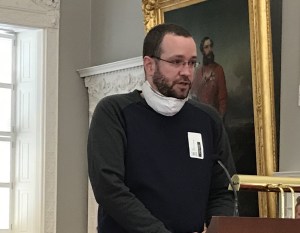 “A child may have been born as the result of a sexual assault,” said Regan. “A child may have come into the care of the minister and been adopted out after being mistreated by their parent. There may be valid reasons why a person does not wanted to be contacted and I think we need to respect that because it could be very traumatic.”

About 150 adoptions a year take place in Nova Scotia. Pyke said he supports the privacy protections as part of the give and take to see the bill become law. Waiting another year for the province to get software in place to handle a potential deluge of inquiries and supports for family reunions (both happy and sad) is also acceptable to his group. For its part, the Department of Community Services claims implementation of the act cannot take place before April 2022 because it must advertise the changes and give adopted persons and birth parents the required six months to confirm their feelings and options around disclosing their personal history.