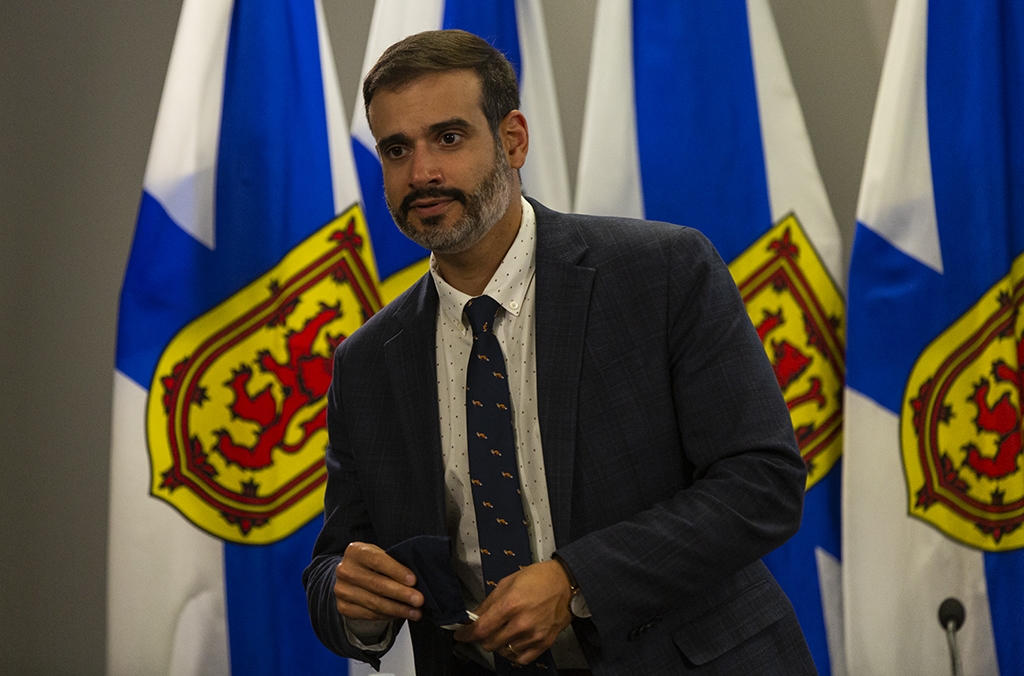 Nova Scotia’s education minister is downplaying the importance of thousands of failed tests for lead in water in hundreds of schools across the province, without putting forward any kind of action plan or clear timeline to fix the problem.

Education and Early Childhood Education Minister Zach Churchill spoke to reporters following a cabinet meeting on Thursday, a day after his department released data that show nearly 84% of Nova Scotia schools had elevated levels of lead flowing from at least one tap.

“I think it’s really important not to be an alarmist over this issue,” Churchill said.

Churchill claimed Nova Scotia was “one of the leaders in the country” on lead in schools, and the water was in compliance with Health Canada guidelines till they changed last year.

“Previously, before the exceedance levels were lowered by Health Canada, we were under their health and safety guidelines, and so Nova Scotians should take comfort in that,” Churchill said.

But the truth is Churchill doesn’t know whether the water was in compliance because it wasn’t being tested.

An investigation last year — led by Concordia University’s Institute for Investigative Journalism, in partnership with the University of King’s College journalism school, the Toronto Star, the now-defunct StarMetro Halifax and Global News — found that the majority of Nova Scotia’s schools had never tested their water for lead.

Following those findings, the department committed to testing all schools’ water and posting the results in time for this school year, and started providing bottled water to schools.

Before that, the department wasn’t testing schools on municipal water systems, relying instead on municipalities’ testing to identify issues. The problem with that approach is the issues are usually found in the schools, not the water. It’s the pipes, taps and fountains in the schools where lead is found.

School board officials across Ontario told the Toronto Star last year that they’ve even discovered lead leaching from brand new fixtures and fountains marketed as being “lead free.”

The results in Nova Scotia show that’s happening here too. There are brand new schools with lead exceedances, like LeMarchant-St. Thomas Elementary, built just last year, where results were as high as 0.022 mg/L — more than four times the Health Canada guideline.

The government did require testing for schools on wells before last year, but the tests results show that doesn’t mean the issues were being fixed.

On Thursday, the minister repeatedly claimed that schools were in compliance until the guidelines changed, and he said public health officials aren’t concerned.

“If you do want to question the health and safety on this, you can question public health, but we do not believe there’s reason for the public to be alarmed on this,” he said.

For Nova Scotia Teachers Union president Paul Wozney, the issue is no “small matter,” he told the Examiner on Thursday:

This is a major, major issue that’s going to require a comprehensive action plan to remediate. And I think one of the things that’s missing at this point, is that now that we know how widespread the issues are, the government is going to have to establish an action plan that’s going to have to come with funding. A major piece of this is infrastructure remediation. Whether it’s water mains or replacing pipes in schools or replacing fixtures in schools, the current operational budgets of schools are already thread-bare and we can’t expect schools to fix these problems on the current shoestring budget. The government is going to have to designate, and keep funded, a pot of money for several years so that all of these schools can remediate these issues and keep their water safe.

Churchill said he didn’t know what it would cost, and when asked how’d make sure the department had the proper resources to solve the issue, Premier Stephen McNeil just said he’d “work with the department to make sure we deal with the issue of lead in drinking water in our schools.”

Neither McNeil nor Churchill could put a timeline on remediation.

“We’re going to work as quickly as possible to make sure we’re having drinking water at the tap in schools,” McNeil said.

“Remediation will depend on the nature of the problem,” Churchill said. “That can vary from the tap itself, to pipes, to the source water. We’ll continue to provide water to students till the remediation happens.”

One solution to the problem that both McNeil and Churchill touted was touchless water fountains.

“We’re getting close to procuring touchless water fountains as well, so that will be coming down the pipe shortly,” Churchill said.

McNeil and Churchill both repeatedly stated that there is water being provided in all schools until the lead issues have been remediated.

But Wozney is concerned about the past too.

“I have kids,” he said. “My oldest is in grade 12. Looking at the results, all the schools that my high school senior has attended have had water quality issues. They’ve been drinking unsafe water every year that they’ve attended school and that’s never been communicated to me as a parent.”

And for teachers, the lead issues could mean they were subject to years or even decades of exposure.

“There is an equity and a gendered component of this story,” Wozney said.

“The teaching profession is 75% female, and we have women teaching in buildings during their reproductive years where they are carrying children and drinking lead-infested water that potentially has impacted for their personal health, but also the lifelong health of the children they’re carrying while working in those buildings.”

NDP leader Gary Burrill rejected the government’s cries for calm over what he called a “fearful neurotoxin.”

“For such a significant percentage of our schools to have been found to be over the limits of what our country’s health authorities tell us is acceptable, this doesn’t call for any kind of blasé, ‘Don’t worry this is all in hand, we’re going to get to it,’ kind of attitude,” he said.

“This is a subject that calls for a real sense of focus and urgency.”

Burrill called on the government to lay out a plan, with a timeline based on high, medium and low-priority schools.

“The important thing now is to do it quickly,” he said.