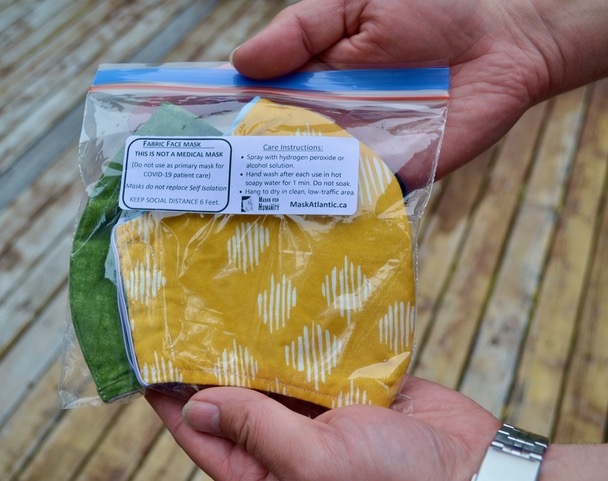 Masks mandatory as of today

Health Minister Randy Delorey was asked how his department intends to enforce a new policy requiring most adults and children over age 2 to wear a non-medical mask when they are inside public places such as stores, malls, theatres, and libraries. Delorey said “there will be no strong-arm approach” to enforcement because it is up to “each and every one of us to protect ourselves and each other” from the virus. The health minister said Nova Scotians had done a good job of following public health directives during the lockdown and “he had more faith in the people of Nova Scotia than some of the questions being asked by journalists.”

The province is taking steps to provide a limited number of free, re-useable cloth masks to people experiencing difficulties finding them. It announced libraries and 24 provincial museums will distribute two per person while supplies last. Small businesses can ask the department of business for one free package of 50 non-medical masks to distribute to their customers.

“Masks are an important part of the whole package of public health measures we need to minimize the impact of a second wave of COVID-19,” said Dr. Robert Strang, Chief Medical Officer of Health in a news release. “Most Nova Scotians can buy or make their own reusable masks and there are many local suppliers with economical options. Having masks available at our museums and libraries helps ensure everyone has access.”

McNeil says no date has yet been determined for when visitors from other provinces will be able to visit Nova Scotia without quarantining for two weeks. He also said “we can’t continue to lock ourselves down and we need to get the economy moving.” Business Minister Geoff MacLellan said “any way you slice it, this is a bad year for tourism.” MacLellan says hotels and people offering accommodations are hardest-hit. Restaurant owners have also indicated they may have to request more help from government if people don’t start going out to eat.

The business minister says while he believes lifting quarantine restrictions on visitors from outside Atlantic Canada would help tourism, some operators have expressed fears doing so might discourage local people from eating out or taking staycations. MacLellan says it’s too early to give up and the province is working on some type of incentive to get people out and about — although he wouldn’t specify what that might look like. It’s unlikely to be a receipt-based voucher similar to what New Brunswick is trying.

Nova Scotia Justice Minister Mark Furey was questioned by reporters yesterday about why he supported a federal-provincial review into the mass shootings when it was announced last week. At the time, the justice minister said it would be a quicker process for families to get answers and Minister of Public Safety Bill Blair had promised the cooperation of all federal agencies such as the RCMP and Canada Border Services. After sustained pressure from the families of the 22 victims, legal scholars, feminist groups, Nova Scotia senators and some Nova Scotia Liberal MPs who pushed for an open rather than a secret process, both the federal and provincial governments agreed on Tuesday of this week to hold a public inquiry.

“We spoke openly in the first instance (a meeting with Public Safety Minister Bill Blair) about all of the options, including an inquiry. We talked about an inquiry, a commission, and a review,’’ said Furey. “And in the absence of our ability to get the federal government to participate in a federal-provincial joint inquiry, we pursued and were successful in those discussions with the federal government to land on the review.”

Reporter Brian Flinn asked Furey, “At any point did the Province of Nova Scotia tell the federal government we prefer an inquiry, we want an inquiry, that is our first option?”

“Those were the original discussions I had with the federal minister,” Furey replied. The minister couldn’t put a timeline on when the Inquiry will get underway but says preliminary work will begin in August.

Education Minister Zach Churchill says it will be up to Public Health to decide what criteria will be used to close schools or keep them open if a teacher or student tests positive for COVID-19.

Churchill suggested there could be a whole spectrum of responses ranging from requiring students to wear masks while in-class to closing a school and providing online instruction for a period of time. Churchill says he is comfortable with sending his own two children to daycare because of the public health protocols that are in place and being followed. The minister says testing schools to see if there is lead in the water should be completed by the end of August. Those results will be made public.

Advanced Education and Labour Minister Labi Kousoulis says several universities who depend on high numbers of international students to finance their programs and operations are waiting on a crucial decision from Ottawa about whether they will be permitted to enrol this September. Public Health has told universities to prepare a plan to help international students self-isolate, if travel restrictions are lifted by Canada Border Services.

Kousoulis was also asked whether he would intervene now that St. Francis Xavier University has decided to stick with a decision requiring students to sign a waiver to protect the university from liability claims, including those related to COVID-19. Kousoulis reiterated his position that universities are “independent institutions” and it’s not government’s place to intervene. He did say he had asked for a legal opinion from within government. That opinion suggests a waiver would not be sufficient to absolve a university if a court determined the university was negligent.

A decision to cancel the Yarmouth-Bar Harbor ferry was announced June 26. This year’s budget contained $16.3 million to operate the service. The service is not operating. Transportation Minister Lloyd Hines has said costs will be lower than budgeted because there will not be fuel to buy or crew to pay. However, there are “fixed costs” associated with the ten-year contract including an undisclosed management fee paid to Bay Ferries. One month after the decision to cancel the season, Hines was still unable to estimate how much the province will save by not operating the ferry.

“We know there is going to be zero revenue so what we are concentrating on is cost-cutting measures that will not preclude us from operating the ferry once we get through this period,” said Hines. “We’re anxious to get back in business once we know what the future looks like.”

Hines says it could be fall or even December when the next budget update is due before taxpayers know how much was paid out this year to keep the boat in dock, for a second year in a row. The PC party has a court date in November to try and find out the cost of the management fee.

A competition to design a $100 million Art Gallery to be located on the Halifax waterfront near Bishop’s Landing is in its final stages, according to Communities, Culture, and Heritage Minister Leo Glavine. Glavine says a professional jury has been appointed to review a shortlist of three submissions, whittled down from about 45 proposals the Art Gallery received from around the world. The jury will determine the winning bidder. The Province is contributing about $70 million to the project cost-shared with Ottawa. Glavine says he is convinced the structure can be built despite concerns around the impact of climate change.

“One of the criteria and requirements given to those who would design the building would be accommodation for climate change and sea level rise,” said the minister. “I think what the Queen’s Marque has done and with the experience of Develop Nova Scotia, we do feel confident in the waterfront location. We will finally have the space to display our collections and attract more people from around the world.”