You are here: Home / Featured / An expert explains why there’s no hotel at the Nova Centre 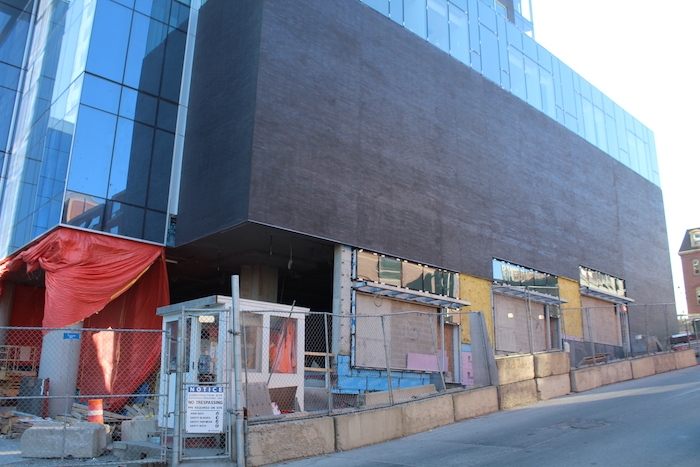 The hotel at the Nova Centre is still under construction and no operator has been named. Photo: Halifax Examiner

Why hasn’t an operator been named for the hotel being constructed above Halifax’s new convention centre?

That’s the question I asked last week of Jan deRoos, a professor of Hotel Finance and Real Estate at the School of Hotel Administration at Cornell University. A specialist in hotel management and franchising, deRoos has created a software program for hotel valuation. He’s published papers with titles like “An Analysis of Data Regarding Public Private Partnerships to Encourage Hotel Development in the United States,”Developing and Renovating Hospitality Properties,” and “Structuring Hotel Deals to Achieve Strategic Goals: An Owner’s Perspective.” If anyone knows about opening hotels, it’s deRoos.

Contacting deRoos was a shot in the dark, but he immediately returned my email and we agreed on a time for a phone interview. The night before the interview, he spent hours researching the Halifax market, and our subsequent interview lasted about an hour.

Hotels connected to convention centres are “tricky,” said deRoos. Five-star hotels are too up-market to be interested in a such a hotel, while three-star hotels would tend to bring down the value of the convention centre. The sweet spot is four-star hotels like those run under the banners Hilton, Marriott, Sheraton, or “maybe a Raddison.”

On the plus side, said deRoos, the downtown Halifax market is geographically contained by the natural barriers of the harbour and Citadel Hill. And by his estimation, the convention centre appears to be managed competently and will likely attract a steady flow of conventions and therefore delegates to stay in a hotel.

So why no hotel yet?

“I’m frankly surprised,” he answered. But deRoos’s review of the market gives an indication why operators would be skittish to operate the Nova Centre hotel space.

To begin, the existing average hotel room occupancy rates in Halifax are “quite low to what I think a first-class market would warrant.”

He points to figures showing average hotel room occupancy rates by Canadian province. (He allows that Halifax hotels may perform better than the provincial hotels as a whole, but since Halifax is so large a part of the province, the figures are a good indicator all the same.) Those figures show that Nova Scotian hotels had a 66.3 per cent occupancy in 2016. Only PEI, New Brunswick, and Saskatchewan hotels had lower occupancy rates.

Room rates aren’t great either, said deRoos. The average price of a hotel room across Canada in 2017 was $149.19. That figure gets considerably higher in hot markets like British Columbia ($167.24), but Nova Scotia falls far behind, at $132.71.

The figure potential hotel operators are looking at, said deRoos, is called the RevPAR — the Revenue per available room, which is calculated by multiplying the occupancy rate (66.3 in our case) by the average room rate ($132.71). For Nova Scotia, the RevPAR is $87.96. In contrast, British Columbia’s RevPAR is $115.35 and Ontario’s is $100.29.

Besides the low RevPar in Halifax, said deRoos, the fundamentals of a convention centre hotel will cause potential operators to move slowly. “You have a three- to four-day convention, with maybe a two-day lag as guests arrive and leave, but you still have dead periods of the week.”

In the case of Halifax, however, the deciding reason that large hotel chains may not want to locate to the Nova Centre is that they’ve already got the market covered. So opening a convention centre hotel would mean competing against their existing operations.

He walked me through many of the other hotel chains.

“It’d be very difficult to put another Marriott hotel downtown,” said deRoos, pointing to the existing Marriott operated Deltas, the Courtyard Inn, the Residence Inn, and the Four Points. “A Sheraton would be a natural fit for a convention centre, but that’s part of the Marriott family.

Likewise, Hilton already operates the Hampton Inn, the Homewood Suites, and the DoubleTree..

“A Holiday Inn isn’t of the quality you’d want for a convention centre, he said.

The one potential chain that isn’t already here is the Hyatt. “They have no product in the market, so maybe they’d be interested,” said deRoos.

“A year,” answered deRoos. “You’d want that long to work with the convention centre operator for joint promotions and advertising.”

It would be possible, said deRoos, to get a hotel up and operating in less than a year, but he estimated that the Nova Centre hotel would require at least 150 employees. “You don’t want to poach most of those from competitors, and management positions will take time to recruit the right people. I’d say it’d take at least six months.”

“That would give a potential operator great pause,” said deRoos. “The hotel is ultimately tied to the convention centre, so you want to make sure the operation is viable.”

Even then, he said, once a hotel is opened it will take about two years before all marketing can bring in enough guests to make it successful.