You are here: Home / Commentary / Northwood Inquiry? No need. McNeil and Delorey have this. Uh… 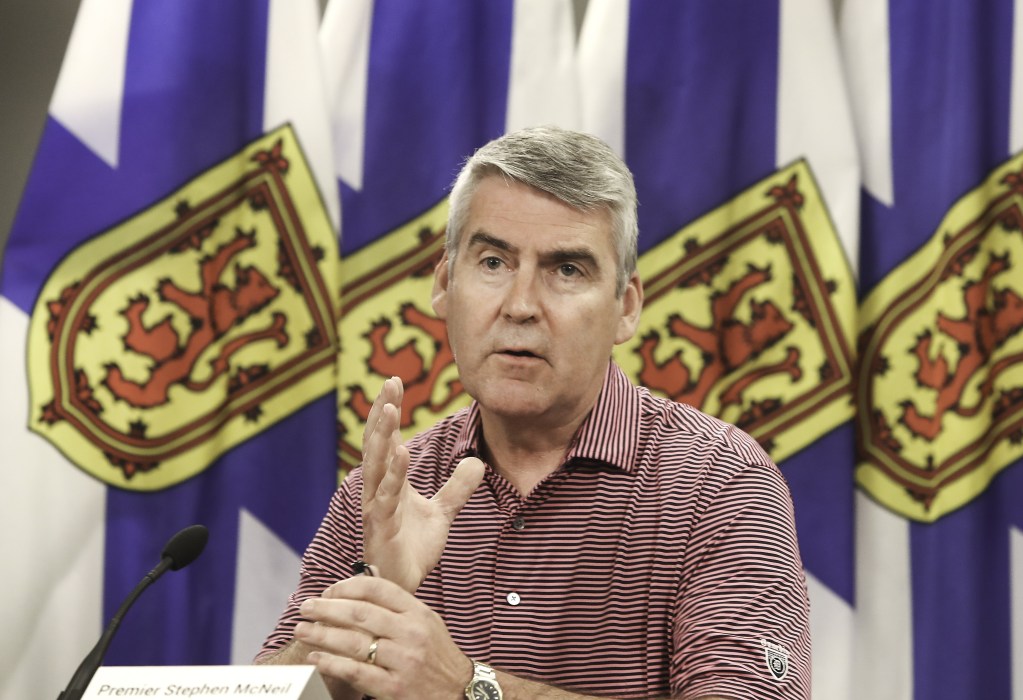 Nothing to see here folks. Nothing to talk about. Nothing to know you need to know because… well, you know. And even if there was, we shouldn’t. We can’t. Know. You know…

“Our committees unanimously voted to adjourn and suspend committee meetings,” explained the Explainer-in-Chief last week, neglecting to explain which of the opposition members on which committees had voted never to meet again, but adding, helpfully: “to be open and transparent, our caucus has a majority on these committees.” Thanks for that.

And for this. The government of the people has stopped doing the people’s business because “we thought it was important that, quite honestly, that public health and our health department focused on the health and well-being of Nova Scotians.”

On this point, it is worth re-visiting Thursday’s exchange between Premier Stephen McNeil and Examinereditor Tim Bousquet:

McNeil: Well, Tim, I’ve been here now 17 years. Every committee votes on their meeting schedule. They have that for 17 years. And before that, the committees determine that. And the governing party who happens to be us at the moment in time, voted. This is not the first time that committees have not sat in the summer. It is the first time, though, Tim, that we’ve had a pandemic in my 17 years. It is the first time that public health is required to focus on the health and well-being of Nova Scotians in such an environment. Even you would have to agree with that. So I think Nova Scotians would expect us to focus on that first. I realize that there will be lots of time for you and the opposition to question Dr. Strang, and we’ll do that. But I’m not willing, quite frankly, to put at risk the health and well-being of Nova Scotians to satisfy a committee meeting. That is just not going to happen. And I’ve been very clear about it. You can be mad about it. You can disagree with me. And that’s okay. But I am going to stay focused on the health and well-being of Nova Scotians, and I’m going to ask public health to do the same thing.

Bousquet: You know, it’s all about being mad or disagreeing. I think the argument that’s out there is that in times of crisis, wherever that crisis is, the most democratic input is required. And here we have a health committee whose job it is to focus on the public health of the province. And it’s not meeting. It’s bewildering to me that you can say out of one side of your mouth that we need to focus on public health. And then on the other say this health committee whose job is to focus on public health won’t be meeting.

McNeil:I don’t know how much more clear I can be. You would have me have public health sit in a committee room for two hours. You would have me have public health prepare for these committee meetings, take time away from the health and well-being of Nova Scotians. It’s just, it’s nonsensical. I appreciate we have a different point of view. That’s what makes this province a wonderful place. We all have different points of view. Fact of the matter is, I’m staying focused on the health and well-being of Nova Scotia, as I expect my members to do the same thing. And I expect public health to the same thing. If there’s MLAs out there that don’t have enough to do, I would suggest to themselves they are not doing a very good job in their own constituencies. Go back and do some work and represent and answer the questions of those you represent. Our caucus is laid out with the issue of public health, the ability for them to ask questions every day. We’d be happy to answer and communicate that back to Nova Scotians. All 51 of us have had the ability every day as caucuses to sit in a committee room and ask public health to go into that committee room when we’re in the middle of a pandemic. I think it is not wise and it’s unhealthy. We’ll debate it, I’m sure, for the months to come, and I’m sure I’ll be criticized for it as well. But I’m glad that I’m getting an opportunity express directly to Nova Scotians through my own words and not through not through someone else’s words exactly the reason why we are doing this, because I want public health to be focused on Nova Scotians and not committee room.

Uh, let’s rewind a bit: “If there’s MLAs out there that don’t have enough to do, I would suggest to themselves they are not doing a very good job in their own constituencies. Go back and do some work and represent and answer the questions of those you represent.” But here’s the thing, Mr.Premier. Holding you, your ministers and seniors officials accountable for what they do and haven’t done is a key job of an MLA. And they can’t do that if you won’t let them.

What Stephen McNeil really seems to be saying here is that none of his yes-premier cabinet ministers, mindless MLAs and honourable public servants — including those happily unconnected to public health and our health department, or to the “current crisis” — can walk and talk policy at the same time.

That may be at least somewhat true. As Exhibits A and B, I give you Randy Delorey, the ghost of health ministers present, and Lloyd Hines, the clown prince of ferries.

In his defensive defence, the premier also notes the Nova Scotia legislature traditionally only meets twice a year, in the spring and fall, so what’s the biggie? “Other Canadian provinces have different requirements,” he noted last week in a virtual scrum with virtual reporters. “They are legislated to sit at this moment in time; we’re not. They don’t have budgets passed; we have a budget passed.”

That budget the legislature passed? After the economic tsunami that is COVID swept over us, does anyone really believe that budget is still operative?

Yes, it is true our legislature traditionally meets only twice a year. But traditionally, its members meet for much longer than this year’s whirlwind, two-week, hello-goodbye-thank-you-for-your-service.  When I last covered the legislature fulltime in 1972­ — in what was, to be truthful, a somewhat simpler moment in our collective history — the spring session of the legislature lasted for 54 sitting days and MLAs passed more than 150 pieces of legislation.

By contrast, as I wrote in this space on March 16, days before the beginning of the current, ongoing pandemic pandemonium excuse-that-trumps-all-excuses:

The province’s 63rd General Assembly, Second Session, opened on a snowy Monday, Feb. 10, 2020, not with a ceremonial honour guard but with the Speaker’s dully routine, “Order, please.”

There was no throne speech. In fact, there hasn’t been a document laying out this government’s big-picture legislative agenda since a now far-past-its-best-before-date throne speech Lieutenant Governor Arthur LeBlanc delivered on Sept. 6, 2018 — 18 months ago.

By the time what little was done was done inside the House of Assembly this winter (this “spring” session didn’t even last until spring) and Stephen McNeil’s government had dismissed the MLAs on Mar. 10, the legislature had met for just 13 days! And the government had managed to pass only its budget and 16 other government bills.

That’s not to suggest there was nothing of moment worth discussing. Start with…

Well, you get the drift.

To which we might now add not only the province’s responses, good and bad, to COVID-19 but other items such as the Portapique mass murder and the always there but suddenly current issue of institutional, systemic racism.

But if I may bring your attention to item two in my pre-COVID bullet list: “our flat-lined long-term care system that is adding even more stress to the rest of our overburdened healthcare system…”

That was then. This is now: three COVID months and 53 deaths of residents in Northwood long-term care later.

Despite that, Stephen McNeill is not only dismissing calls from family members and others for a public inquiry into the tragedy, but he is also refusing to recall the legislature or reconvene legislative committees, including the health committee, which his government itself established last year ostensibly to provide oversight of such matters.

We do know, thanks to a recent reporting reminder from the Examiner’s Jennifer Henderson, that his government rejected requests — for three years in a row — from Northwood’s board for funding to add new floors to the home to eliminate some of the double-bunking that we now know helped ignite the coronavirus to “spread like wildfire” through the facility.

We also know that since it came to power seven years ago, this government has not yet added a single long-term care bed to the province’s healthcare system.

And now, thanks to the Chronicle Herald’s Andrew Rankin, we can add yet another puzzling piece to the why-what-went-wrong puzzle:

Instead, our I’m-an-internet-meme premier and his missing-in-COVID-action minister of health will conduct an in-house government review of what happened at Northwood and other long-term care facilities to determine “lessons learned and protocols to be taken.” The premier, Rankin noted in the Herald, “said any recommendations coming from those reviews would be implemented but didn’t offer a timeline for the reviews or whether their findings would be made public.”

Well, that’s all I needed to know. You?