Yesterday afternoon, Northern Pulp issued a news release stating it will ask the Supreme Court of Nova Scotia to undertake a judicial review of the Nova Scotia Environment Minister Gordon Wilson’s December 17, 2019 decision requiring the company to submit a full environmental assessment report before deciding to approve its proposed effluent treatment facility to replace the current one at Boat Harbour.

“Northern Pulp, nine individuals representing the broader forestry sector, and Unifor, the union representing hourly employees at Northern Pulp’s kraft pulp facility, have applied to the Supreme Court to review if the decision was made on proper grounds and considered all of the evidence presented,” states the release from the company.

“We’re hoping that through this judicial review, Northern Pulp will be provided with clarity about the process and elements required in order to be successful in the Environmental Assessment process that we’ll be embarking on later this year,” said Brian Baarda, Chief Executive Officer of Paper Excellence Canada.

The applicants are asking the court to order the Nova Scotia Environment Department to produce all records, correspondence and documents related to the December 17 decision. Most importantly, they want the court to quash or kill the Minister’s decision that led to closing down the mill.

It’s an interesting strategy considering recent calls for “judicial reviews” of controversial decisions taken by several Nova Scotia environment ministers have been rejected by the courts. Examples include a request by the Fundy Fisherman’s Association to review allowing a massive tidal turbine in Minas Passage and a request by a citizens group to review a decision to permit burning tires for fuel at the Lafarge Canada cement plant near Brookfield.

An appeal by the Sipekne’katik First Nation to review a decision by then Environment Minister Margaret Miller allowing the Alton Natural Gas Storage Project to proceed is still in play after many years of litigation. In all three cases, different judges have expressed reluctance to override the decision-making authority of elected representatives.

What happens this time is anybody’s guess, but Brian Hebert, the lawyer who has represented Pictou Landing First Nation since 2006, and throughout their efforts to have the Boat Harbour facility adjacent to their community closed, was quick to weigh in on Twitter.

“This has no impact on the closure date (of Boat Harbour),” tweeted Hebert. 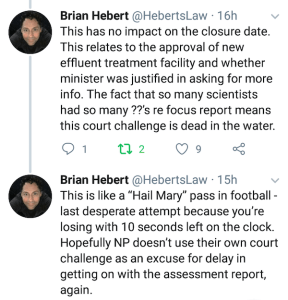 In the application to the Supreme Court, here are the following grounds (or reasons) put forward for the review of the Environment Minister’s decision:

The Notice filed in Court lists those asking for the review as:

They will appear in court on March 5, 2020, to make a motion for the court to give directions for the judicial review.

For anyone who followed the environmental assessment process for Northern Pulp’s new effluent treatment facility, these “grounds” for a judicial review may seem a stretch.

As reported here, Northern Pulp’s initial submission was riddled with problems. Then Environment Minister Margaret Miller identified 19 key deficiencies, and asked for a focus report to fill those gaps, the terms of reference of which were made clear to Northern Pulp. Rather than spend the year allotted to prepare the focus report, Northern Pulp  submitted it in a matter of months. That, too, failed to include information that the terms of reference stipulated had to be in included in the focus report. Five federal government departments provided feedback on the report, some of it scathingly critical, as the Halifax Examiner reported here.

Northern Pulp’s decision to drag the government into a legal wrangle contrasts sharply with the latest moves by the Pictou Landing First Nation. The news that the pulp company will challenge the government’s decision in court came just hours after a post  earlier in the day on the Pictou Landing First Nation Facebook page from the PLFN Chief and Council to update the community about what was happening with the shutdown of the Northern Pulp mill. The tone of that message was conciliatory and positive.

The message from Chief Andrea Paul and Council said that as long-time, next-door neighbours of the toxic Boat Harbour lagoons, people in the community were already seeing an improvement in the air and water.

After 54 years, pulp production at the mill has finally stopped. It’s been a long struggle, but we made it. The change at Boat Harbour is already noticeable. Odours have been virtually eliminated from the water in the settling ponds and the ASB [aerated stabilization basin] since production stopped on January 10, 2020.

The only water entering Boat Harbour through the pipeline is the water from the power boiler, cooling water, condensate water and runoff water.

While this water has come contaminants, it is much cleaner. This cleaner water has flushed out a lot of the pulp effluent from the settling pond and the ASB. The water is no longer brown and frothy. This is the first step toward a full cleanup.

A lot of you have heard the announcement from the Premier that water will continue to flow into Boat Harbour after January 31 up to April 30, 2020. This news was disappointing, since we were all hoping that all wastewater would stop flowing on January 31, 2020. However, we understand the need for an orderly shutdown of the mill.

This means keeping the heat on during the winter while Northern Pulp drains the water from pipes and equipment, which if not drained, could freeze and cause damage to the environment and leaks. This process, of winterizing the mill, will be a one-time process, this will not need to continue on every winter.

The PLFN Chief and Council message to Band members said it will take weeks or months for the province and the company to come up with a plan to “re-direct” runoff from the mill site when it rains or the snow melts. That water currently flows into the same pipe that carries the effluent from the kraft pulp mill to the Boat Harbour holding ponds. The pipe is owned by the province, and the Premier promises it will be cleaned and disconnected by April 30. 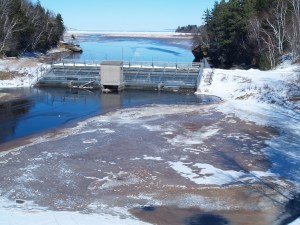 This is where the treated Northern Pulp wastewater currently flows from Boat Harbour into the Northumberland Strait, just a few hundred metres from Pictou Landing First Nation.

“The Premier has assured us that no new effluent from the pulp process will flow into Boat Harbour,” concludes yesterday’s PLFN Facebook post:

We take him at his word. The Premier showed a great deal of integrity and courage when he rejected Northern Pulp’s request to continue to use the Boat Harbour treatment facility until a new treatment facility could be approved and built.

The PLFN statement indicated the PLFN has received permission from the province to monitor the instructions Nova Scotia Environment will issue to Northern Pulp to conduct “an orderly shutdown” of the mill. But before that can happen, Northern Pulp must first submit to the government its procedural plan for the closure. According to PLFN, the province has told the company its plan to put the mill into “hibernation” must be filed with the province no later than Monday, January 26. Then that plan will be shared with Pictou Landing First Nation.

The cleanup of the toxic Boat Harbour facility owned by the province is still two years away and could take seven to eight years to complete. The province’s proposed plan is being reviewed by the federal Impact Assessment Agency (IAA), which replaced the former Canadian Environmental Assessment Agency (CEAA) in 2019.