Northern Pulp Mill is suing seven named and “various other” unnamed fishermen who the company says have blockaded survey boats from conducting the surveys necessary to route a pipe from the mill into the Northumberland Strait.

For all of its history, the mill has pumped effluent into Boat Harbour, causing a environmental catastrophe in that body of water. “For 50 years the area’s residents witnessed the transformation of Boat Harbour from a once pristine tidal estuary, so frequented by the Mi’kmaq of Pictou Landing that they referred to it as ‘the other room,’ into a brown, frothy, toxic soup containing some of the world’s most dangerous chemicals: carcinogens such as dioxins and furans and heavy metals such as mercury, zinc, cadmium and chromium,” reported Linda Pannozzo for the Halifax Examiner.

In 2015, the McNeil government passed the Boat Harbour Act, which mandates that the mill stop pumping effluent into Boat Harbour by January 31, 2020. In order to meet that deadline, Northern Pulp has proposed to build a new treatment facility, and then to pipe the effluent out into the Northumberland Strait.

Fishermen and others in the Pictou area have objected to the new plan, fearing that the new plan merely shifts the environmental problem — right into the rich fishery of the Northumberland Strait.

In January, PEI Premier Wade MacLauchlan wrote a public letter to Catherine McKenna, the federal minister of Environment and Climate Change, and to Nova Scotia Premier Stephen McNeil, objecting to the plan. “I share the concerns of Nova Scotia and Prince Edward Island fishers that an outflow pipe placed into the Northumberland Strait could have unintended consequences for our commercial fishery and aquaculture industries,” he wrote. 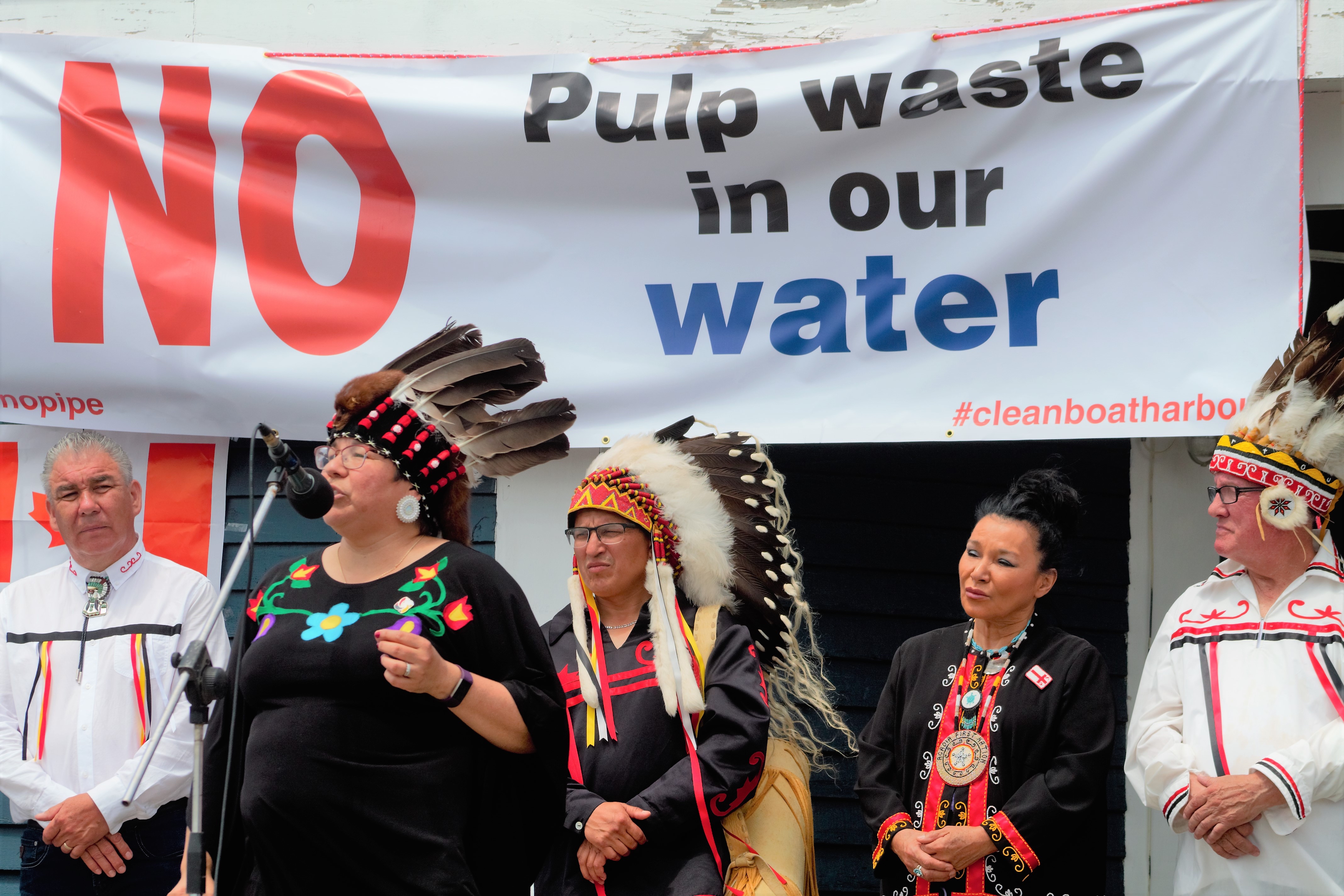 In July, a massive protest against the pipe was held in Pictou. “Many chanted ‘No pipe, no way’ as they marched from the local arena to the town’s waterfront,” reported the CBC. “Organizers estimated at least 1,000 people attended the protest.”

“The hash tag “#nopipe” has become a rallying cry for fishing families and other citizen groups concerned about pollution from the Northern Pulp Mill,” reported Joan Baxter for the Halifax Examiner.

Despite the opposition and protests, Northern Pulp Mill continued with its plans for the pipe.

“”Northern Pulp contracted with CSR GeoSurveys Limited (CSR) in early April 2018 to provide services to survey an undersea route” for the pipe, explains the lawsuit filed today in Nova Scotia Supreme Court. CSR is a Porters Lake firm; its president is Glen Gilbert.

Immediately, claims the lawsuit, fishermen began interfering with the surveying.

The lawsuit claims CSR then stopped surveying and headed back to port. “Two of the Defendants’ vessels pursued the SeaQuest for two kilometres… while the Defendants shouted profanities.”

CSR employees on the SeaQuest say they experienced much the same on April 19. But that survey discovered “ice scours at the bottom of the seafloor” along the proposed pipe route, so Northern Pulp stopped the surveying work until it could develop alternative routes.

A new route for the pipe was developed over the summer. “That proposal involved a pipeline from Abercrombie Point that would pump the treated effluent 14 km, following a route across the causeway, along the highway to the Caribou wharf, and then four kilometres out into the Northumberland Strait, close to the route the PEI ferry takes,” reported Joan Baxter.

On October 23, CSR sent the SeaQuest back out to survey the newly proposed route, and was met again by objecting fishermen.

“One of the Defendants’ vessels, ‘Red Trapper,’ operated by Allan Francis MacCarthy, intercepted the SeaQuest,” and told the CSR employees to go back to port, claims the lawsuit. “Mr. MacCarthy advised that ’20 boats were coming to kill’ the CSR employees.” As the SeaQuest headed back, MacCarthy threatened again: “Get going they are going to fucking kill you.”

Three or four boats then chased the SeaQuest back to Pictou, but as the SCR employees were on the pier, “one of the Defendants, Edward Donald Shaw, threatened the physical safety of the CSR employees. Mr. Shaw stated “We are great hunters in Pictou Harbour. If you come back to Pictou Harbour, you are going to be gone.”

As a result of the threats, says the lawsuit, CSR chartered a 42-foot boat called the Speculator, thinking the larger boat would provide more safety for the employees.

The Speculator set out to survey on November 16. As early as 5:30 that morning, protesting fishermen were shining lights into the Speculator, and the RCMP were called. By 7:15, “CSR employees observed a number of the Defendants’ vessels beginning to form a blockade at the mouth of the Pictou Harbour at its narrowest point.”

As many as 14 boats took part in the blockade and, according to the lawsuit, dropped lines and buoys to interfere with any attempted passage of the Speculator. CSR gave up on surveying that day.

The Speculator was being leased from a company not named in the lawsuit. On November 18, claims the lawsuit, protesters used their cars and trucks to block employees of the company from leaving the pier. The RCMP was called, and the vehicles were moved, but some of the protesters followed them back to their hotel and posted the name of the hotel on Facebook.

The next day, November 19, CSR again tried to conduct survey work with the Speculator. Again, some 14 boats blocked the harbour mouth. The Speculator unwisely attempted to break the blockade, only to find itself surround by boats. “The Defendants dragged buoys and ropes off their sterns in an attempt to disable the Speculator. A rope from one of the Defendants’ fishing boats went under the hull of the Speculator,” preventing the boat from moving.

Eventually, continues the narrative of the lawsuit, the Speculator broke free and fled back to port. “Approximately 25 of the Defendants’ vessels chased the Speculator back” to the dock.

The lawsuit is accompanied by affidavits from CSR employees Cole Gilbert and Colin Toole, and from Bruce Chapman, the manager of Northern Pulp Mill. The CSR employees repeat and elaborate on the allegations contained in the claims. Chapman attached an economic impact report on mill operations to his affidavit.

“The Defendants have refused to discontinue their conduct and have threatened that they intend to repeat this conduct,” reads the lawsuit. “The Defendants’ conduct towards CSR has resulted in serious consequences to Northern Pulp, including increased costs and suspension of surveying activities… Any shutdown of the Mill as a result of a delay in the construction of the [effluent pipe], even on a temporary basis, would severely jeopardize the economic viability of the Mill and thus its survival as a going concern.”

Northern Pulp is asking the court to impose damages against the defendants, and for a permanent court injunction against each of them from further disruptions of the surveying operation.

The allegations in the lawsuit have not been tested in court. As of this afternoon, no hearing date has been set for the matter.

Northern Pulp is represented by Harvey Morrison and Ryan Baxter at McInnes Cooper.