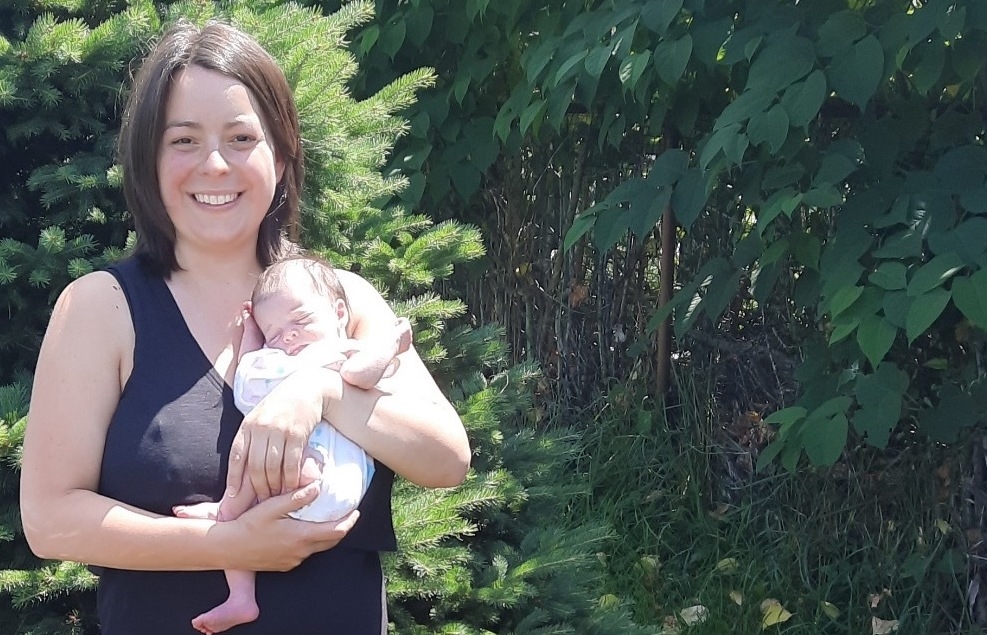 The Progressive Conservatives also tabled a bill that may be debated at a later date that would allow any MLA to participate virtually in legislative sessions so long as there is a quorum of 15 elected Members and leaders physically present in the House of Assembly. 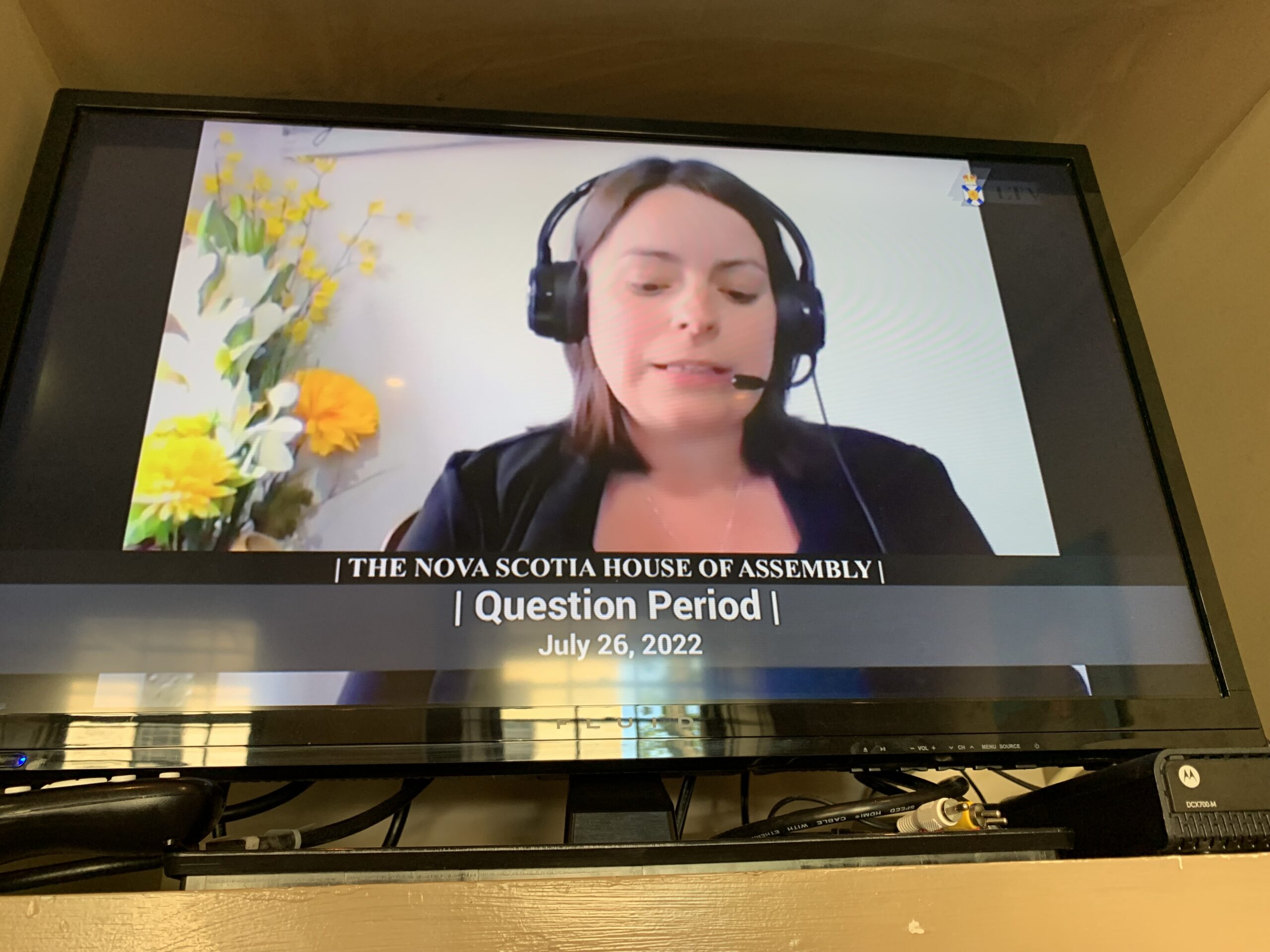 When today’s emergency session of the Nova Scotia legislature resumes, it will be absent at least one MLA who has been denied permission to participate.

The legislature is being recalled by Premier Tim Houston to vote against a binding recommendation that would give MLAs a 12% pay raise.

Because Coombes is unable to travel, the NDP Caucus asked the other political parties if they would support a request to let Coombes participate from home, using video conferencing. In fact, Coombes participated virtually in a Public Accounts Committee meeting three weeks ago because her doctor advised against travelling so close to the delivery.

Last week, the legislative clerk conducted a poll of all 55 MLAs to indicate “yes” or “no” whether they would support Coombes’ request to work from home during what is expected to be a short-lived session.

According to Clerk James Charlton, this type of a request made outside of the legislature requires the unanimous consent of all MLAs. The request was denied after not all MLAs supported it — a decision that disappointed Coombes.

“By not giving consent they are blocking me from doing my work in a way that would accommodate being a new parent,” said Coombes. “There is a feeling of having to ask my colleagues, the majority of whom are men, for this permission that leaves a bad taste. In a space that is still only one-third women, we have to do better to make sure people see themselves in the legislature.”

This appears to be the first time a sitting member of the Nova Scotia legislature has given birth. Making a minor accommodation for a new parent in most other workplaces would not be a big deal. What’s going on here?

“We know there are emergencies that should be addressed in the legislature and the premier calling the house back for this summer sitting is an opportunity to talk about the health care and the cost of living crises,” said Coombes, the NDP deputy House leader and critic for Public Works. “But if we want a more inclusive and diverse legislature that includes more women and young parents we have to make sure systems are in place to ensure they can participate.”

We will never know who voted to deny Coombes the opportunity to participate because it is a secret ballot  It would be useful to know how many MLAs blocked the request by voting “no” but because this was a poll taken outside the legislature, there are no rules governing the voting procedure as there are inside the Legislature.

Clerk James Charlton says: “When a poll is conducted (which is rarely, although more often since 2020), it is to take some action that would normally require a vote in the House, such as a motion to amend or suspend the rules on a temporary or permanent basis. There really is no authority to even conduct a poll. We’re just asking all Members to agree to something not provided for in the rules so we can get in the House and the Members can then deal with the matter during proceedings.”

Okay. But in the absence of rules you could argue there isn’t any reason why Charlton shouldn’t give us the score — presumably the six NDP MLAs voted to support their own colleague, but what about the other 49 members from the other political parties?

“I voted yes to allow Kendra Coombes to join virtually to the Legislative Session,” said Elizabeth Smith-McCrossin, the MLA for Cumberland North and the only Independent sitting in the assembly; Smith-McCrossin was booted out of the PC caucus for breaking ranks early in the pandemic over restrictions affecting travel at the Amherst-Sackville border. “The fact that someone voted no is very disappointing in this day and age. It send the wrong message to Nova Scotians. Many of us are trying to improve the diversity of elected persons and have gender parity in government.”

Those sentiments were echoed by Caitie Clark, senior communications advisor for the Liberal caucus.

Clark said the NDP reached out to the Liberals last week to inquire if they would support Coombes participating in the legislative session by videoconference and leader Zach Churchill assured the NDP they would do so.

At a meeting of the Liberal caucus last Wednesday, no MLA expressed any difference of opinion. Late Friday, Charlton, the clerk, indicated to Liberal legislative coordinator Ray Anjoul the vote had not been unanimous and any MLA who might have mistakenly voted “No” had until 5pm Friday to let Charlton know they wanted to revise their choice. Clark told the Examiner Anjoul contacted every Liberal MLA to advise of this option and was told each MLA had supported Coombes.

That leaves the PC Caucus. The Examiner will make that inquiry today (the clock ran out yesterday), even though it’s highly likely the results of the poll will stay a secret. But we received word this morning that the PCs are planning to introduce some kind of amendment today that would allow all MLAs to participate virtually during sessions of the legislature.

Charlton said polls are used rarely when it comes to government business — the last time was in the spring of 2021 when COVID concerns forced the political parties to take a similar vote outside the legislature to decide if they could go back in session using a hybrid model that allowed some MLAs to work from the legislative chamber and others to work from home using video conferencing.

So the technology isn’t the problem. Political partisanship and disrespect for women is.

In the absence of any written rules around votes or polls taken outside the legislature, Charlton explains the “default” or fallback position of the Clerk’s Office is to follow the same procedure as if the politicians had voted on the Coombes request inside the legislature. Politicians vote on most motions using a verbal “yay” or “nay.” How each individual politician voted is not broken out or even noted unless two MLAs request a recorded vote. Recorded votes tell the parties and the public precisely which politicians and which parties supported or opposed a particular policy or government action.

That’s it for the Civics lesson.

Ironically, the Houston government is calling politicians back to work to amend legislation that would force politicians to accept salary increases approved by an independent panel whose recommendations are binding. Essentially they need to change the rules to turn down extra pay at a time when the premier knows most Nova Scotians are struggling to pay their bills due to record inflation.

Perhaps they could also come up with a more transparent procedure to let the public in on votes held outside the legislature.

And while the PCs may have been hopeful this would be a one-day session, both the Liberals and New Democrats intend to introduce bills dealing with the high cost of living and the government’s handling of COVID that could keep politicians at their desks at the Big House on Hollis Street until Friday.

Update: We received this statement from Minister Kim Masland, Government House Leader, after the story was published:

The PC Caucus wants every member of the Legislature to have the option to participate in all proceedings virtually, including MLA Coombes. For some, virtual participation due to health issues may preclude them from being there in person.

The last few sessions included a virtual option, which functioned well. Just as society has, the Legislature should modernize and continue with the virtual option for those unable to attend in-person.

That’s why last week, we met with House Leaders from all parties and made it clear that at the beginning of business Tuesday, we would introduce a Resolution to allow virtual participation. If passed unanimously, it would let any member participate virtually within minutes. We advised this would require unanimous consent ⁠— the Liberals indicated their support for the motion, but the NDP were firm that they would not support it. We are hopeful that they will change their minds and not discriminate against any member of the Legislature who may be unable to attend for health reasons and follow common sense when the motion is tabled.

While indicating that they will not support the motion treating every member equally, the NDP asked for their own exemption for one specific member. This member-specific request was put to a poll by the clerk. The poll asked that MLA Coombes, and only MLA Coombes, be allowed to participate virtually. The poll was anonymous but our members were encouraged to vote ‘yes.’

While the poll did not receive unanimous consent, the NDP, and MLAs on all sides, can still vote to continue to allow every member, equally, to participate virtually as required. Unanimous consent can resolve this issue in minutes and offers the NDP an opportunity to confirm that they believe all MLAs should have the opportunity to participate in the Legislature, virtually or otherwise, on an equal basis.