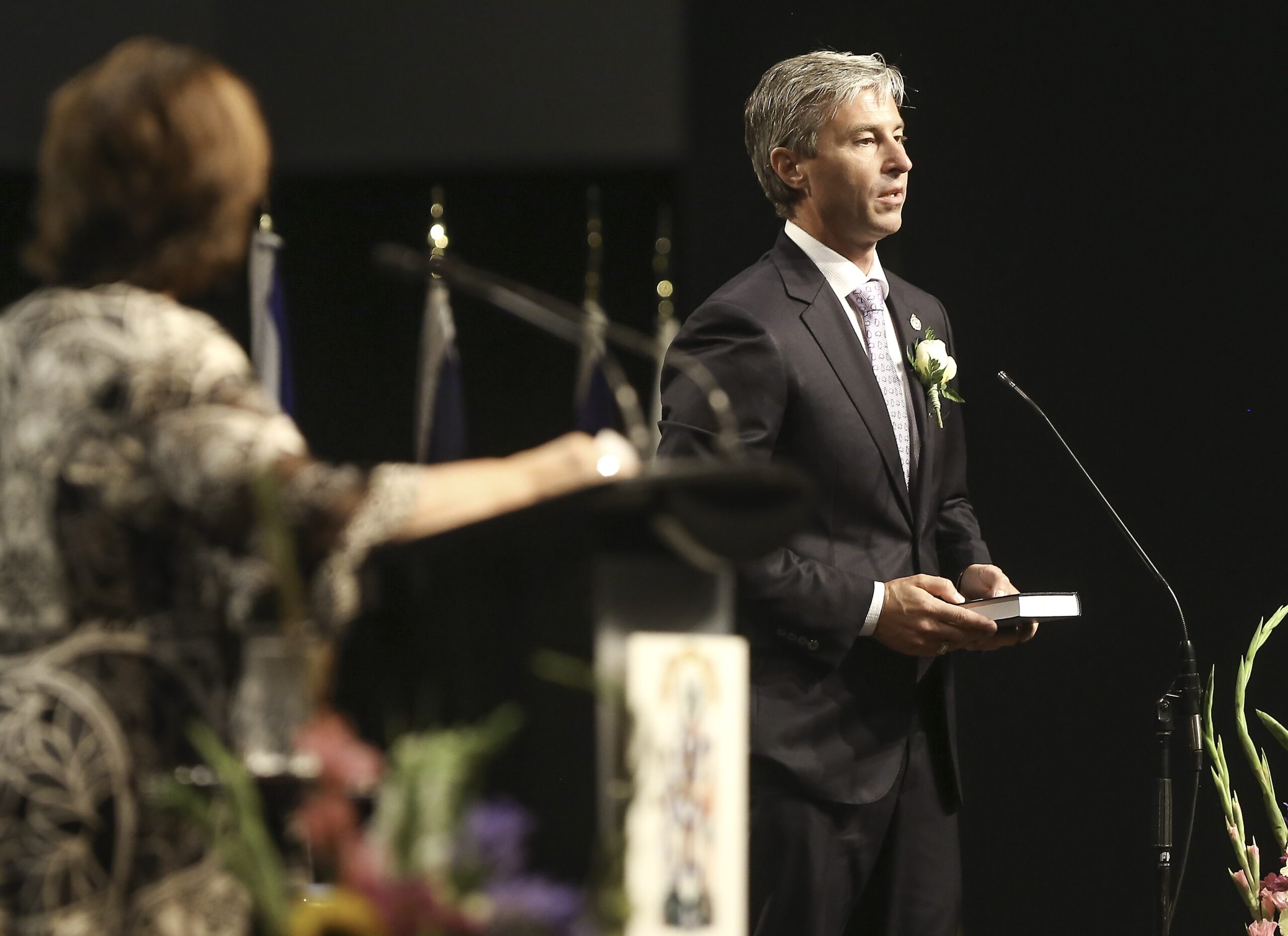 Premier Tim Houston was sworn in as Nova Scotia’s 27th premier this afternoon, and new cabinet ministers were announced.

New ministers and other assignments are:

The premier [Houston] will also serve as President of the Executive Council, the Minister of Trade and the Minister responsible for Intergovernmental Affairs and the Office of Regulatory Affairs and Service Effectiveness.

Michelle Thompson will become the Minister of Health and Wellness. She will also oversee a newly created Office of Health Care Professionals Recruitment.

Brian Comer assumes responsibility for the Office of Mental Health and Addictions. He’ll also be the Minister responsible for Youth and Communications Nova Scotia.

Barbara Adams takes on the new Department of Seniors and Long-term Care.

Karla MacFarlane is the new Minister of Community Services and Minister responsible for the Status of Women and the Office of L’nu Affairs.

Jill Balser will be the Minister of Labour Skills and Immigration and have responsibility for Apprenticeship. Brian Wong will lead a separate Department of Advanced Education.

Becky Druhan will be the Minister of Education and Early Childhood Development.

Pat Dunn will return to cabinet as the Minister of Communities, Culture, Tourism and Heritage, which assumes responsibility of Tourism Nova Scotia. He’ll also have responsibility for African Nova Scotian Affairs, the Office of Equity and Anti-Racism Initiatives and the Voluntary Sector.

Susan Corkum-Greek will be the new Minister of Economic Development.

Agriculture will be led by Greg Morrow. Steve Craig will be the new Minister of Fisheries and Aquaculture.

Brad Johns is the new Minister of Justice and Attorney General. He’s also responsible for Elections Nova Scotia, the Human Rights Commission and the Accessibility Act.

John Lohr is the Minister for the Department of Municipal Affairs and Housing. He’ll also have responsibility for the Emergency Management Office and Military Relations.

Tory Rushton becomes Minister of the Department of Natural Resources and Renewables, combining the former Departments of Lands and Forestry and Energy and Mines.

Environment and Climate Change will be led by Tim Halman who has also been appointed Chair of Treasury Board.

In a press conference held immediately after the swearing-in ceremony, Houston and Municipal Affair Minsters John Lohr (who has the housing file), avoided my questions about imminent rent increases. Our exchanges:

Bousquet: You say there’s no overnight fix [to the housing crisis] and yet thousands of people are getting letters saying their rents are going to go up 50% and higher as soon as the state of emergency is lifted. Yyu maintain rent control is not a solution that needs to be a long term solution. How do these people get any kind of relief in the immediate future?

Houston: Rent control is not a long term solution. It’s not. I mean, that’s my position. I believe in real solutions that really get to the heart of it — the solution to a housing crisis is more housing. And I do not believe that rent control will result in more housing. So therefore, it’s not OK. It’s not a legitimate solution in the long term, in my mind. Are there short term concerns? Yes, I have immediate concerns. Yes. We’ll we’ll work with that. We’re still in a state of emergency in this province. Nothing will change until until that’s over. We’ll work with Public Health on that. But we’re only interested in real solutions. We’re just not interested in sloganeering. So I my message to them is the same: I understand their concern. I grew up in a family and I’ve had those discussions with my own parents about the concerns that they had from time to time. Rental increases were coming. I get it. I understand it. And my commitment is to find real solutions to the problem, to the issues facing this province.

Bousquet: What do you say to the hundreds or thousands of people who have gotten notices saying that their rent is going to increase 50% and more when the state of emergency is lifted?

Lohr: I’m not I’m not aware of that number, but we we do care immensely. And we are tracking all of these things very, very closely in order to support those who are in need.

After she spoke of improving relations with local communities, I asked new Education Minister Becky Druhan if the new government will consider returning to elected school boards. She said the government is “definitely looking at” doing so.

At the end of the day, the province issued a press release announcing a shake-up of the bureaucracy. Most notable are the “departures” of Bernie Miller and Duff Montgomerie from government.

Miller has held many posts over the years, most recently as deputy minister of Office of Strategy Management. Montgomerie was the deputy minister of Labour and Advanced Education. Both have been heavily involved in the Northern Pulp file.