You are here: Home / Featured / McNeil government: if John Perkins doesn’t like being wrestled to the floor at a public meeting, he can file a complaint 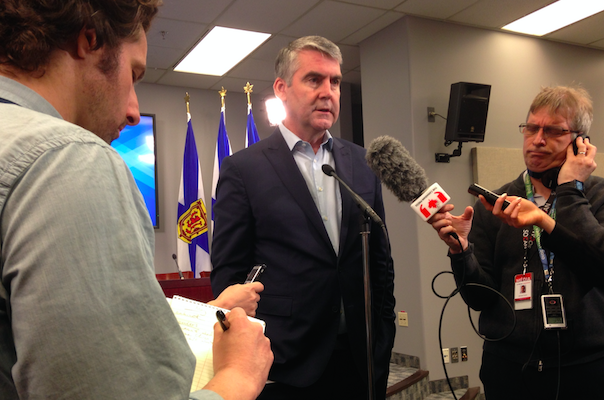 If you aren’t keen on police roughing you up and cuffing you at a pubic meeting, or corporations dialing up the Mounties to act as bouncers, then go file a complaint with one of two watchdogs that investigate actions by RCMP officers. That’s the identical response which Premier Stephen McNeil, Justice Minister Mark Furey, and Energy and Mines Minister Derek Mombourquette were offering John Perkins yesterday.

Reporters questioned the politicians after the weekly Cabinet meeting about a shameful incident involving the Atlantic Gold mining company, the RCMP, and Perkins, who bore the brunt of the police action on May 23 at the Sherbrooke fire hall. A video shot by one of the persons in attendance has been shared extensively on social media, on news channels, and seen around the world. Strangely enough, both the Nova Scotia Justice Minister and Minister of Energy and Mines claim they haven’t viewed the video.

As first reported by Joan Baxter for The Halifax Examiner, the public meeting hosted by Atlantic Gold to answer questions about a proposed open-pit gold mine at Cochrane Hills next to the St. Mary’s River in Guysborough County turned ugly last week.

NDP leader Gary Burrill described the video as “disturbing to watch.” As for the two Cabinet ministers with responsibilities for policing and mining maintaining they hadn’t seen the video, Burrill said, “It certainly doesn’t reflect well on their level of engagement. I think we need to have a fundamental principle in Nova Scotia that consultation is not conducted in handcuffs. People ought to have the right to expect when they go to a public meeting that when they express a view that is not the same as the project proponent, they will not be slapped in handcuffs and thrown to the ground.”

The YouTube video shows Perkins being knocked to the floor by an RCMP officer called in by someone from Atlantic Gold on the pretext of requiring assistance to deal with “a disturbance by several people.”  That’s according to the news release issued by the RCMP last Friday, which stated the officer was responding to a 911 call. No disturbance is visible in the video, although Perkins — who is opposed to the mining development and a member of the Sustainable Northern Nova Scotia Society — can be heard questioning why he is being told to leave his seat in the meeting room.

Several of the two dozen people present, including Raymond Plourde of the Ecology Action Centre, told The Examiner they were unaware of any disturbance until a man later identified as the security manager for Atlantic Gold entered the meeting with an RCMP officer in tow. The Mountie gave Perkins (who has a heart condition) the bum’s rush from the meeting room, wrestled him to the floor, and handcuffed him before arresting him. However, no charges were laid and Perkins was released a couple of hours later.

Justice Minister Mark Furey is responsible for policing and public safety in Nova Scotia. When asked by reporters on Thursday whether he would investigate to find out why the RCMP officer had forcibly removed a citizen from a public meeting without apparent cause, he said, “Certainly I have no problem reviewing the video. I didn’t know there was one that existed, but I can’t speak to the actions of the police at the scene. Police make those decisions based on the information they have. For me, to speculate on what they may have or didn’t have and then to intervene, would be inappropriate as Justice minister. There is a process through the Civil Review and Complaints Commission available to the victim who was arrested and detained.”

But when citizens attend a public meeting, shouldn’t they feel secure that they don’t risk having a security guard call “911” and summon the RCMP to throw them out on suspicion of so much as preparing to ask an adversarial or unwelcome question?

“That’s a valid point, but as Justice Minister, I can’t intervene and it would be inappropriate for me to intervene not knowing the circumstances,” reiterated Mark Furey.

PC leader Tim Houston had a different take on the incident. “The message that’s being sent is that authority can be used to silence a voice. I’m not comfortable with that and I don’t think this government should be. I’ve seen the video, it’s pretty disturbing. I think the bigger concern is we are going to have plenty of projects put before government, and citizens need to have their input as part of the process on subjects that will sometimes be emotional. In this case, there are a lot of people who feel they didn’t get to have their say because the police were called.”

Furey wouldn’t comment on whether the company should be fined under the Emergency 911 Act for calling “911” if there was no actual emergency, as several witnesses have stated. Premier Stephen McNeil said that point would be addressed if John Perkins files a complaint with the RCMP watchdog.

Another Process to the rescue.

“I know there are people who are unhappy,” said McNeil. “There is an avenue for those who feel it was inappropriate. I would encourage anyone who thinks excessive force was used to file a complaint with the Serious Incident Response Team.”

Yet another Process awaits your call.

John Perkins did not respond to a request from the Halifax Examiner for comment. He has sought legal advice. The environmental group of which he is a member, Sustainable Northern Nova Scotia Society, has sent the provincial Minister of Justice and federal Minister of Public Safety a letter asking for a public inquiry into the incident. The group is also asking the Ministers for a commitment that it is “safe for all citizens to engage in democratic, peaceful questioning and dissent around resource extraction issues without intimidation, the threat of police brutality or arbitrary surveillance.”

In all, it was a landmark day for learning about which particular process Nova Scotians can pursue if they think their fundamental rights of freedom of thought, belief, opinion, expression, peaceful assembly, and association have been infringed upon. People who weren’t satisfied with their government’s response to the Sherbrooke incident could begin mining certain sections of the Canadian Charter of Rights and Freedoms and assaying the “reasonable limits prescribed by law as can be demonstrably justified in a free and democratic society.”