You are here: Home / Environment / Losing the forests for the trees: New figures show increase in clearcutting 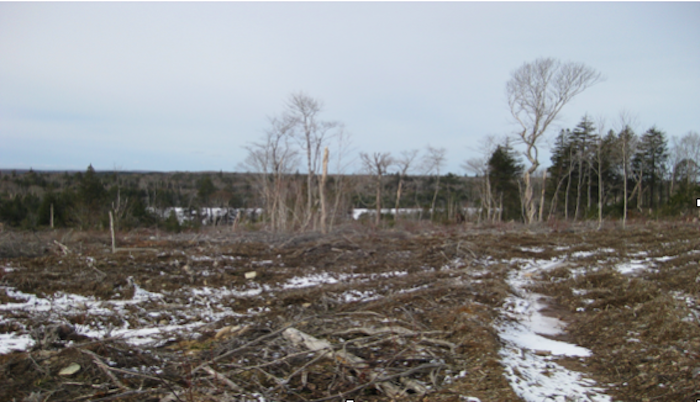 Despite what the Nova Scotia government has said in response to concerns raised over clearcutting, the most recent figures released from the National Forestry Database (NFD) indicate that in 2015, both the overall harvest and the proportion of trees removed by clearcutting continued to increase.

And ironically, the national body used data supplied by the province for its assessment.

The National Forestry Database shows that out of a total of 34,777 hectares harvested in 2015, an estimated 30,937 hectares of publicly and privately owned woodland, or 88.95 per cent, were clearcut. That’s the highest combined total in five years. The figure is considered an “estimate” because of uncertainty related to cutting on private woodlots.

Bruce Nunn is the communications director for the NS Department of Natural Resources. After checking with foresters and senior officials, Nunn says the Department agrees the total amount of land harvested and clearcut in 2015 increased very slightly over 2014. But the Department disputes the size of the increase reported by the National Forestry Database, showing no change in the percentage for the Province as a whole.

The difference in interpretations of the same data (again, compiled by the province) is even more startling when you look at 2015 statistics for clearcutting on Crown Lands, a major source of public controversy.

According to the national statistics, the area of crown land clearcut increased 18 per cent in 2015 over the previous year. More Crown land in Nova Scotia was clearcut than at any time in the last 25 years. But according to the Province, clearcutting on Crown lands is continuing to decrease. Compare the following sets of statistics.

Confused? “Can’t see the forest for the trees”?

The problem lies in how a clearcut is defined. The definition used by the National Forestry Database is called even-aged management. It includes first and second-stage clearcuts, “shelterwood,” and “seed tree” — a clearcut that leaves behind a few standing trees.

Shelterwood is a form of cutting that usually leaves behind 50 per cent or more of the biggest, oldest trees to provide shade and to regenerate a single species (e.g. red spruce). Once that species is established, the remaining mature trees are cut down.

The National Forestry Base considers this “a two-stage clearcut” (in effect, mature trees left standing will inevitably be cut). Bruce Nunn of the provincial Department of Natural Resources says the province does not view it this way. Instead, it considers shelterwood as “similar to a selection cut,” and excludes it when calculating clearcuts. In 2015, shelterwood accounted for 1,900 hectares that were not included in the province’s lower clearcut percentages — for both crown land and the province as a whole.

Usually, there’s about a 15-month gap between the time statistics are collected by the province and when they’re publicly reported by the National Forestry Database. During that “gap” last August, the province announced that its previous policy of reducing clearcutting by 50 per cent was no longer relevant.

That goal had been set after a decade of public consultation. Instead, the Department of Natural Resources now says it will use “tools that ensure all harvest treatments are aligned with the nature-based requirements of Nova Scotia’s Lands.” One can only imagine the myriad ways in which that phrase could be parsed.

The actual definition of what a clearcut is in Nova Scotia will remain a vague and moving target, often at odds with the large swaths of denuded landscape seen from an airplane window or in satellite images.

“What the numbers show is that despite the Nova Scotia government’s longstanding public commitment to reduce clearcutting to no more than 50 per cent, and despite repeated assurances from the McNeil government that they were on track to meet those commitments, the Department of Natural Resources never even tried to meet them,” argues Ray Plourde, the forestry and wilderness coordinator with the Ecology Action Centre.  “And they absolutely refuse to accept any meaningful reforms to damaging forestry practices, especially clearcutting.”

Forest Nova Scotia represents sawmills, paper companies, and some private woodlot owners. Its executive director, Jeff Bishop, says he is “cautious” about relying on the National Forestry Database numbers. “They use a conversion from the volume of wood to the area harvested based solely on the assumption of clearcutting,” said Bishop in an email. “They do this because Nova Scotia tracks only volume…and requires industry to report volume (and not the area or the harvest method). From previous work with our members on this data a few years ago, it’s not what I consider accurate to what’s happening on the ground.”

“This has to do with the change in ownership of the Bowater land,” explains DNR’s Nunn. “Bowater land use to be under the ‘Industrial’ category (meaning privately owned land managed by a forestry industry company), but since the province bought the land, it is now under the “Crown” category. The data shows that the increase in Crown harvest coincides with a decrease in Industrial harvest. The total amount of clearcutting across these two categories (Crown and Industrial) has remained fairly stable.”

Nunn says that since 2013, the province has required companies operating on Crown lands to conduct pre-treatment assessments and then to use the Forest Management Guides (which are based on the Forest Ecosystem Classification and on Tree Characteristics) to develop a harvest prescription.

“The upward spike in clearcutting on crown land is the effect of the overly-generous WestFor deal on the western crown lands,” suggests Ecology Action Centre’s Raymond Plourde, although NFD data do not provide information that would either back up or refute such a claim.

Thirteen sawmills and companies that make up the WestFor consortium are working with temporary allocations of 300,000 green tonnes on crown land, which was once leased to Bowater Mersey in southwestern Nova Scotia. The companies hope the government will confirm 10-year licences for them.

Meanwhile, Northern Pulp in Pictou County has already received a 10-year lease for 125,000 green tonnes. Natural Resources Minister Lloyd Hines has said he will wait for the 2016 harvesting numbers before signing long-term leases for the half million acres of crown land. Those numbers will likely appear in 2018, after the next provincial election.

When it comes to measuring how well the Nova Scotia government is managing our forests, though, the most recent clearcutting figures will likely add fuel to the fire.