You are here: Home / Featured / Lobsters quickly sell out in front of Nova Scotia legislature: ‘They have a treaty right to buy from the Mi’kmaq’ 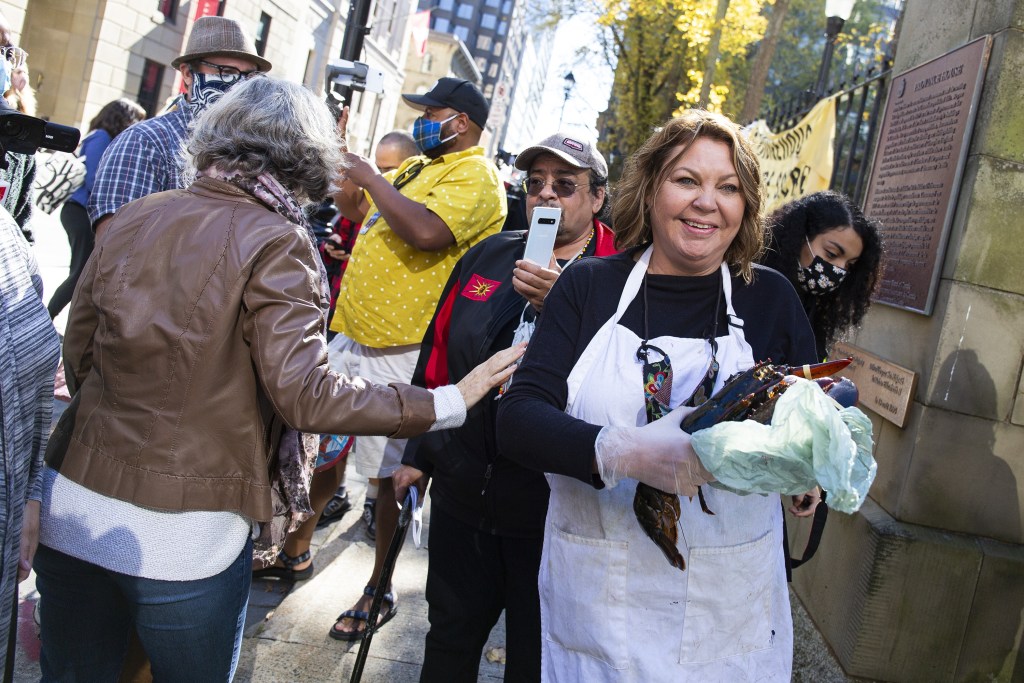 People slipped $20 bills into Cheryl Maloney’s apron as she walked through the crowd in front of Province House in Halifax on Friday with her last lobster. — Photo: Zane Woodford

Within about half an hour of setting up shop outside Province House, Cheryl Maloney was sold out of lobster.

By noon on Friday, the line-up stretched around the corner, from Hollis to George Street. There was no scale, and Maloney sold one or two lobsters to each person until she ran out. She sold a full crate’s worth — about 100, maybe 120 lobsters.

“These people are lining up to buy our lobster today because they know they are treaty people. We are all treaty people,” Maloney told reporters before she started selling.

“They have a treaty right to buy from the Mi’kmaq.”

Stacey Gomez was happy to be one of the first to buy lobster on Friday.

“I just wanted to support Mi’kmaw fishers,” Gomez said. “I think there’s not currently really opportunities for community members to buy treaty lobster and so this is a really great opportunity to be able to do something.”

Maloney, a member of the Sipekne’katik First Nation, was selling the lobsters there to send a message to the people who work inside. While her chief, Mike Sack, works on the federal issues around the First Nation’s fledgling moderate livelihood fishery — and, increasingly, to keep his people safe — Maloney is focused on the provincial issues. 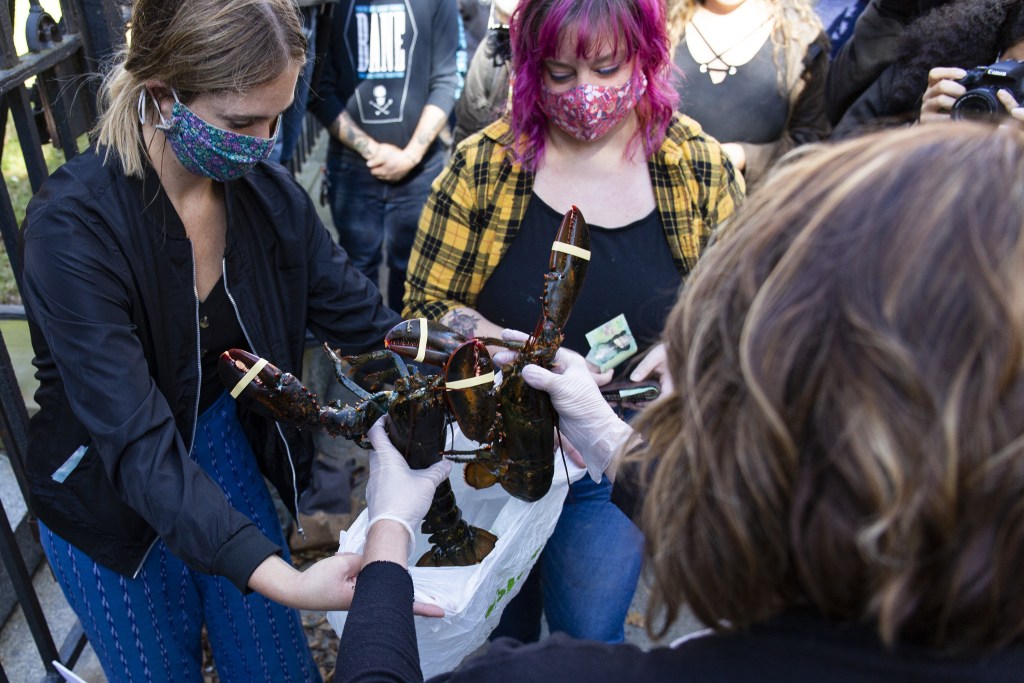 On Thursday, Premier Stephen McNeil told reporters it was up to the federal government to fix the increasingly volatile situation on Nova Scotia’s southwest shore.

“That is false. That is wrong,” Maloney said.

“Today we are going to concentrate on the provincial authorities and the need for the province to step up and do something. This is wrong.”

Maloney named three things she wants the premier to act on.

First, she was McNeil to review and amend the Fish Buyers’ Licensing and Enforcement Regulations made under the provincial Fisheries and Coastal Resources Act. Specifically, she’s looking at section 19(1)(b) of those regulations, which states:

That section is contrary to the Marshall decision and it’s unconstitutional as it violates the treaties, Maloney said, challenging the government to enforce it.

“If they don’t want to review it and amend it, I respectfully ask them to come and arrest me and stop me from selling so that we can go to court, and we can get it struck down,” she said.

There were a handful of Halifax Regional Police officers on hand, from a distance, and none took up that challenge. 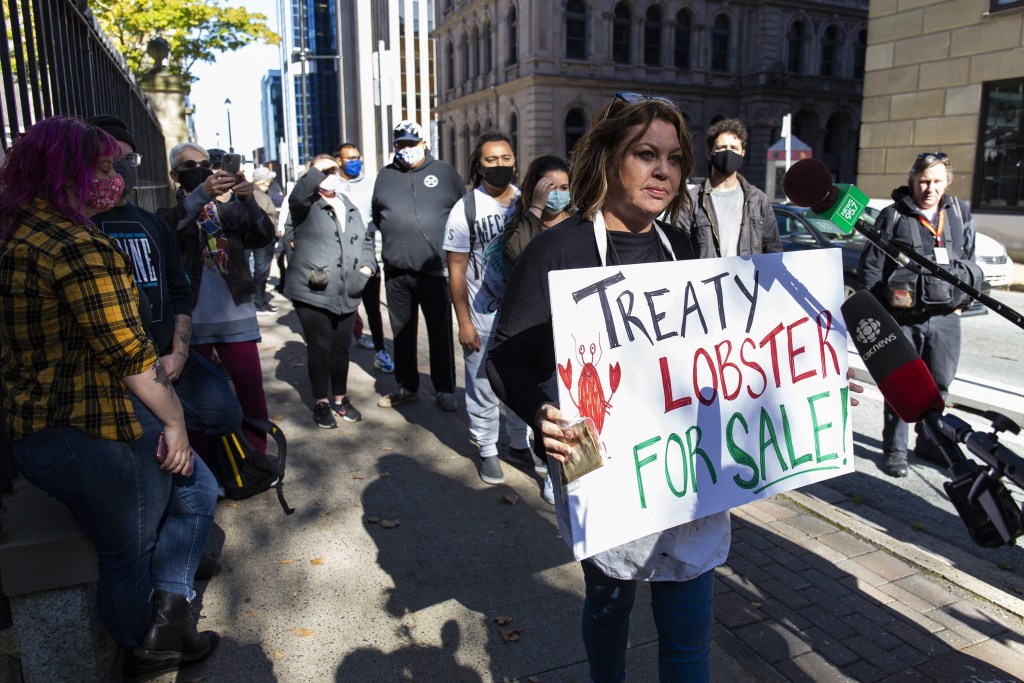 Cheryl Maloney, right, holds a sign advertising ’Treaty lobster for sale’ as she speaks to media in front of Province House in Halifax on Friday. — Photo: Zane Woodford

Second, Maloney noted that the provincial government, through the Police Act, is responsible for the RCMP in Nova Scotia. Earlier this week, Ku’ku’kwes News reported the the Mounties took two hours to respond to a lobster pound where hundreds of commercial fishermen trapped Mi’kmaw fishers inside and burned a van. No one’s been arrested for that incident, or any of the other numerous confrontations this week.

“They’re standing around and watching crimes against my people,” Maloney said.

While Chief Sack called on Prime Minister Justin Trudeau to “do your job,” and protect his people, Maloney called on the provincial government to step up the RCMP presence in the area. 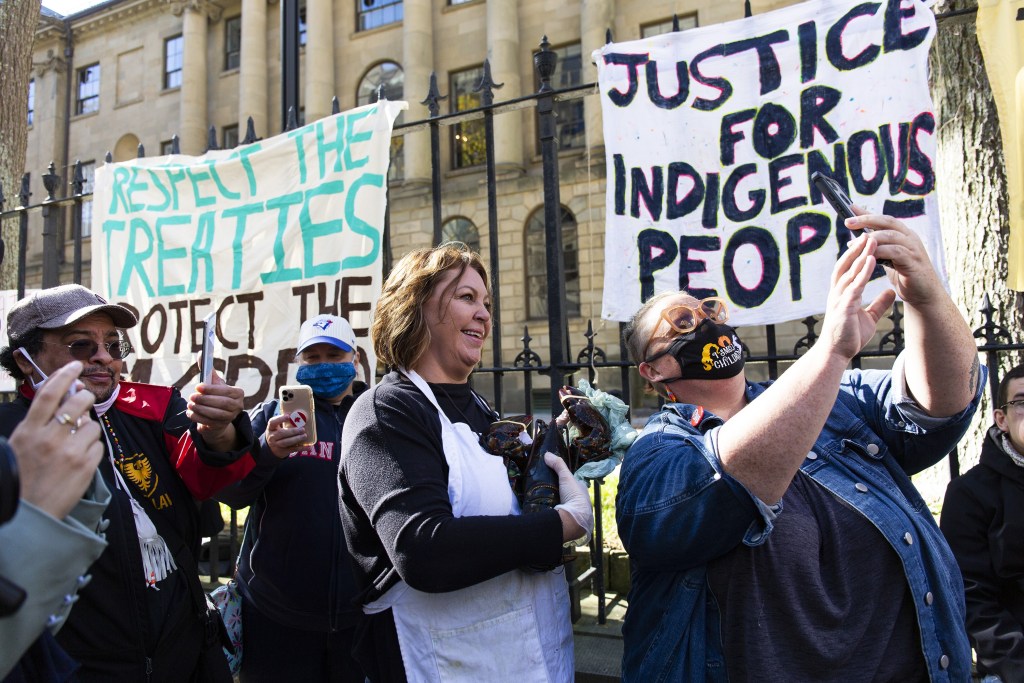 Cheryl Maloney brought the last — and biggest — lobster in the crate through the crowd for selfies in front of Province House in Halifax on Friday. — Photo: Zane Woodford

Third, Maloney wants the province to enforce its Human Rights Act. She said businesses are denying Mi’kmaq services on the basis of their race.

After selling out of lobsters and bringing the last one on a tour through the crowd, Maloney said she was happy to see so many people support the Mi’kmaq.

“Nova Scotians know they are treaty people, and that’s a sacred relationship, and for them to be here with us today, it just warms my heart because not everybody feels that way,” she said. 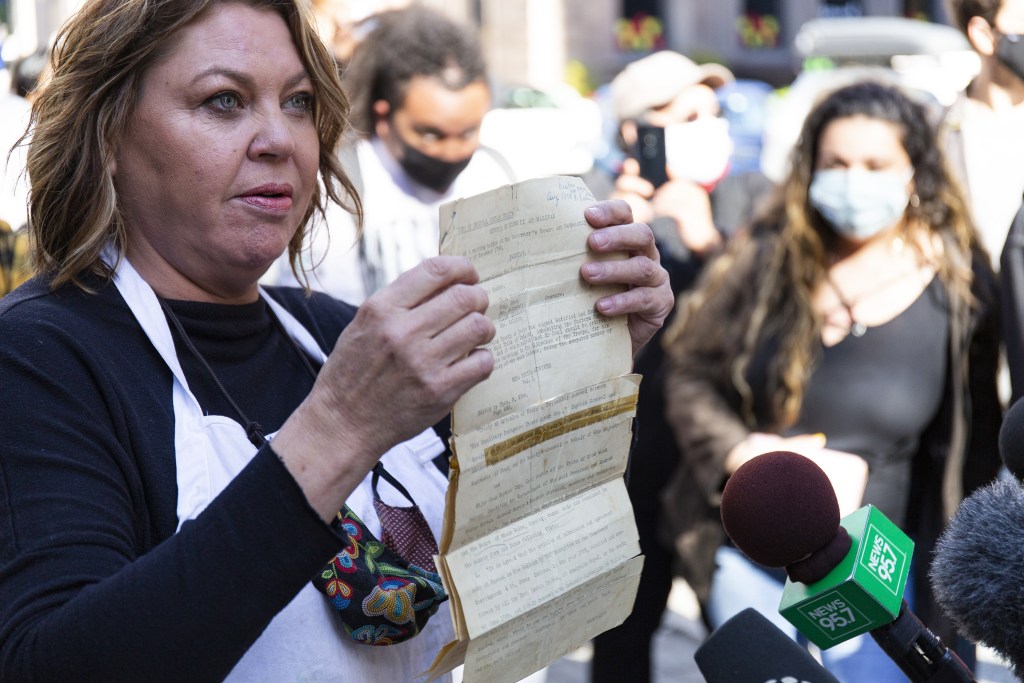 Cheryl Maloney holds up her aunt’s copy of the Treaty of 1752. Maloney’s aunt used to carry the treaty around in her apron, and Maloney did so on Friday. — Photo: Zane Woodford

Paula MacMillan went to Friday’s sale to support the Mi’kmaq, and said she doesn’t believe people understand that we’re all signatories of the treaties.

“I’m here on behalf of the settlers,” she said. “We haven’t done a very good job of upholding our end of the treaties all these years so I’m supporting my friends in the First Nations community and and trying to educate people a little bit about what the treaties are.”

MacMillan carried a sign with a quote from the Treaty of 1752: