You are here: Home / Featured / Liberals vote down motion for more data on Nova Scotians at risk of eviction 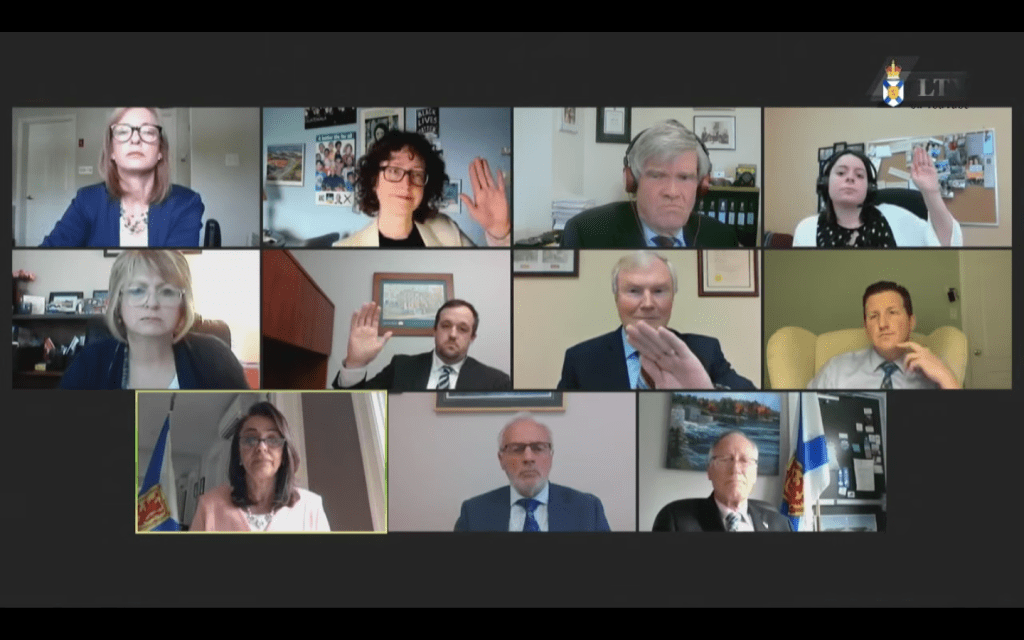 Liberal MLAs reluctantly agreed to hold an extra meeting to discuss Nova Scotia’s housing crisis, but wouldn’t support a motion for more data on potential homelessness during a standing committee meeting on Tuesday.

The legislature’s Standing Committee on Community Services met virtually with “Housing and COVID-19 and the homelessness crisis” on the agenda. The committee heard from Eiryn Devereaux, deputy minister of the Department of Infrastructure and Housing; Tracey Taweel, deputy minister of the Department of Community Services; and Art Fisher, executive director of the Family Service Association of Western Nova Scotia.

The meeting was timely: on Monday the government received a report from the Affordable Housing Commission, co-chaired by Devereaux, recommending against permanent rent control and in favour of immediately spending $25 million on housing. And just last week, a report from the Canadian Centre for Policy Alternatives-Nova Scotia, independent from government, called for the creation of 30,000 permanent affordable housing units with capital spending of more than $500 million.

Devereaux and Taweel used their opening remarks Tuesday to highlight what they’re respective departments are doing to provide housing, while Fisher used his time to sound the alarm on Nova Scotia’s housing crisis, exacerbated by the pandemic.

“I think ultimately what COVID-19 renders visible is a huge extraction of wealth from particularly rural Nova Scotia and particularly all of our communities that are struggling,” Fisher said.

“I don’t think the real estate phenomenon is actually a phenomenon I feel it’s a deliberate extraction of wealth from our communities.”

As of a few weeks ago, Fisher told the committee, there were 54 people between the ages of 12 and 24 either unhoused or at risk of eviction in those areas. As of Monday, that number was up to 61, Fisher said, and there are 107 adults in the same situation.

That’s just the people the Family Service Association of Western Nova Scotia and their partners are working with, Fisher said.

“I think all of the data is always understated,” he said.

Fisher said he was tired of going to meetings where people talk about success stories.

There’s a need for more supportive housing, not shelters, Fisher said. The organization has been trying to build a 50-unit development including up to 35 supported housing units, and it’s hit barriers at every stage.

“It’s been a very frustrating process to try to bring funders together to do when co-investment application for that site. For example, I’ve been told over and over again, ‘Well, we’re not we’re not actually doing new builds now. You can get this funding later when the new build funding comes out.'”

During the question period of the meeting, the deputy ministers didn’t have answers to many of the MLAs’ questions.

NDP MLA Lisa Roberts asked whether the either department had set a target percentage of affordable units for the province, recognizing only 4% of units in Halifax were renting at non-market rates as of 2016.

Devereaux said he thinks a longer term plan for housing should have that sort of target, and he said the department had one currently but he couldn’t name it.

NDP MLA Kendra Coombes asked how many income assistance recipients are currently being housed in hotel rooms. Taweel didn’t have a number.

PC MLA Brian Comer asked Devereaux how many affordable housing units have been built in Nova Scotia in the last decade.

“Over the last 10 years, I don’t have the stats right in front of me,” Devereaux said, but he claimed there have been tens of thousands of affordable housing units “supported for repairs and adaptations.”

Comer asked whether homelessness has increased in Nova Scotia since the beginning of the pandemic.

“It’s a complex question, I think, to answer,” Taweel said. “Certainly the pandemic caused a lot of challenges for a lot of individuals and I think as was highlighted, lower income individuals, vulnerable Nova Scotians certainly felt the impact of the pandemic much more significantly than than other Nova Scotians.”

In the Halifax area there were nearly 500 people on a by-name list last year, and that number is now down to 383. Numbers across the rest of the province are spotty, based on point-in-time counts in select areas.

“The point of my question was just to identify that there are significant data gaps,” Comer said.

Later in the meeting, Comer moved “to ask the department to compile data on how many people will be at risk of eviction once the pandemic is over, so we can better prepare for the steps that need to be taken in order to properly hold these individuals.”

Roberts was in favour of the motion.

“Certainly given that there’s no indication from government that there will be an extension of or introduction of more rigorous form of rent control after February 2022, it seems like a very worthwhile motion,” Roberts said.

Liberal MLA Ben Jessome was concerned the committee had no definition of “at risk of eviction.”

All Liberal MLAs on the committee — Jessome, Leo Glavine, Rafah DiCostanzo, Suzanne Lohnes-Croft, and Bill Horne — voted against the motion, and it was defeated.

The Liberals did vote in favour of another motion, from Craig, to add a meeting to the committee’s schedule to further discuss the housing report released this week. The committee would typically take July and August off, and meet next in September.

“The report calls for considerable actions to be taken with 100 days, so that would take us into September of this could be said and done if we wait till September,” Craig said.

“I’d like to be able to ask questions way before that. Implementation of some of these recommendations and particularly the four that they’re talking about the action items around it are significant, and I doubt if in fact the legislature for example is going to be called back to change some of the legislation required, and that’s been suggested in the report, so I do think that this committee has a legislative oversight responsibility to ask some of these questions beforehand.”

“I just wonder why the member would not have used this time today at this meeting to discuss,” Lohnes-Croft said.

Craig said that wasn’t the topic for Tuesday’s meeting, and the report was only released the day before.

Lohnes-Croft also wanted Craig to recognize that the added summer meeting would be an exception to the norm.