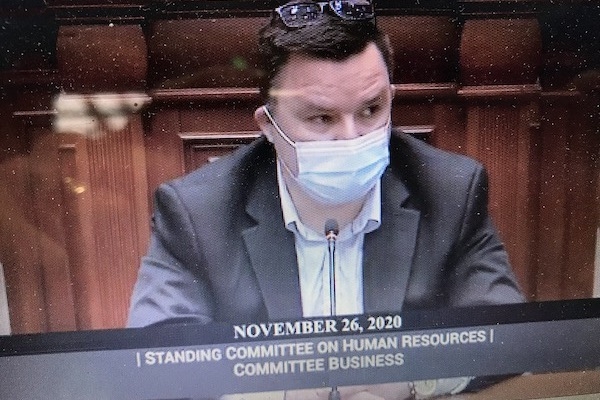 A funny thing happened on the way to the legislature today. A scheduled, in-person meeting of the legislature’s Human Resources Committee to discuss now to recruit and retain more Continuing Care Assistants for nursing homes and homecare went ahead without that discussion.

Committee chair Brendan Maguire, the Liberal MLA for Halifax Atlantic, said concerns about bringing in witnesses from outside the HRM, where COVID cases are spiking, prompted a poll of MLAs from all three political parties after 4:30pm yesterday for permission to shift the two-hour meeting to the telephone.

The two witnesses who were scheduled to make statements and take questions — Deputy Health Minister Dr. Kevin Orrell, based in Sydney, and Kelliann Dean, CEO for the Office of Immigration — did not cancel and were willing to appear in person or on the telephone, according to Maguire. Videoconferencing was not an option because it was too late in the day for Legislative TV to make the necessary arrangements.

NDP Cape Breton Centre MLA Kendra Coombes had already arrived in HRM by the time the email went out asking MLAs to agree to a telephone conference. Dartmouth South MLA Claudia Chender said the NDP Caucus rejected the teleconference option because they saw no reason why the meeting couldn’t be held in-person as long as the Public Health protocols continue to be followed.

“Late yesterday the Committee was polled for permission to move the meeting to the telephone,” said Chender. “Our Caucus did not agree to that change and the reason we didn’t agree is because we were not aware there was any problem from the witnesses with appearing nor was there any issue with staff appearing. The rules say people can come in and go to work; our children are in school. Many government employees, particularly in the Health Department, are at work.”

Chender was clearly suggesting political rather than public health considerations were behind the last minute change to shutdown the discussion. Here’s the reason Maguire gave the committee this morning but which Chender claims did not accompany the request late yesterday:

Chender wasn’t buying it. She also had issues with how effective teleconferences are with multiple people on the phone line trying to question more than one witness. She continued to push for video conferencing as a better alternative.

“I move an additional videoconference meeting of the Human Resources Committee be scheduled with today’s witnesses as soon as possible to discuss the topic of Continuing Care Assistant recruitment,” said Chender.

Chender’s motion received the support of the Progressive Conservative caucus.

“The topic of CCAs is critical because of the amount of people who go into homes and long-term care facilities, they are completely understaffed as is,” said Barbara Adams, PC MLA for Cole Harbour – Eastern Passage. “And if we have the ability to have teleconferencing, then I suggest we could have been having the Legislature meet, instead of being one of the only provinces that didn’t bother to have a fall session. It is important we not be cancelling meetings. Whether it is virtual or in person, it is just important that we meet.”

Chender’s motion to re-schedule today’s witnesses was defeated when Maguire, as chair, cast the tie-breaking vote. The next scheduled meeting of the committee will be Dec. 17 (by videoconference), when it will set the agenda for discussions during the upcoming months.

Any political discussion of staff shortage in long-term care is effectively dead.

Update, 2:45pm: After the televised portion of the meeting, it was decided that the clerk will try to get the witnesses from today for the meeting on 17th if they are available.

The politicians will gather in the Legislative Assembly for a one-hour, largely ceremonial session on Dec. 18 ,where no questions will be permitted.

There will be no end-of-term party.