You are here: Home / Environment / Liberal candidate Jacob Killawee tried to sell himself as a critic of the aquaculture industry, but potential voters weren’t buying 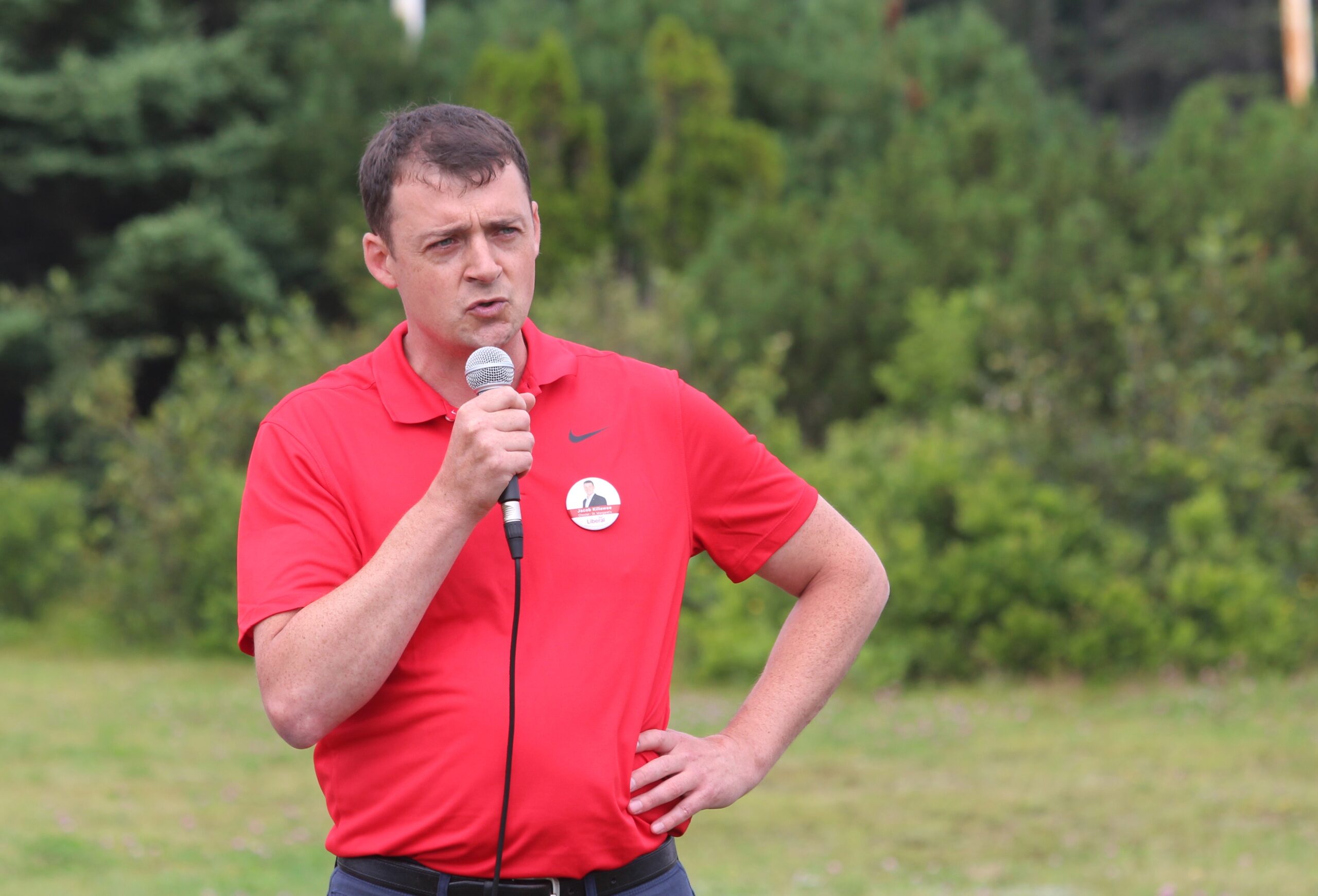 Jacob Killawee, the Liberal candidate for the riding of Chester–St. Margaret’s, tried yesterday to sell himself as a critic of the aquaculture industry, but a skeptical audience of potential voters wasn’t buying.

Killawee appeared outside the Blandford Community Centre with the other three candidates for the riding — Jessica Alexander (Green), Danielle Barkhouse (PC), and Amy Reitsma (NDP) — at an event hosted by the Twin Bays Coalition and the Healthy Bays Network, two organizations opposed to fish farms on the south shore. Inside the community centre, Cooke Aquaculture was hosting a regulatory “open house” required for the expansion of its Bayswater fish farm — which has already happened.

The crowd outside numbered about 70, but wasn’t in violation of the 50-person outdoor gathering limit under COVID rules because they were widely spaced across the community centre lawn and a gentle sea breeze broke the high humidity. The Cooke event indoors was limited to 15 people at a time, but I didn’t see anyone at all enter or leave the building for the hour I was at the outdoor event.

“I’m a 15-year veteran of the Canadian Armed Forces,” said Killawee by way of introduction. “I spent the last five years running a naval tactical operations unit out on the high waters. So I have a very deep relationship with the water. And I can assure you the passion which we all share with the ocean is one you’ll find wherever you go all over the world. I spent a considerable amount of time in my career in the Indian Ocean, seeing the effects of what industry can do to coastal communities in equatorial countries. So it’s very important to be mindful that what we what we’re embarking upon here [fish farms] has serious considerations to the environment, our communities, as well as business and our rural communities.”

“My own personal position on this particular issue is every effort should be made to try to find ways to make the inshore fishery work,” continued Killawee, echoing a sentiment shared by each of the other three candidates. “And that means bringing the fish farming ashore. We know that bringing fish farming ashore provides food security. It also provides infrastructure and it provides a safe means to interact with the environment.”

Then came Killawee’s sidestep: “It’s very important that when we pursue these types of initiatives, that we stick to a process, we follow that process. And when we follow that process, we make sure that we’re engaging with all of the appropriate stakeholders along the way. That means our communities. That means our local subject matter experts, First Nations communities. We can’t necessarily determine, you know, one way or another an approach to these issues and not acknowledge the complexity thereof. So everyone as stakeholders deserves a say in the process. … So we all are stakeholders and we need to make sure that we stick to that process throughout.”

In a question and answer period, Killawee admitted that the Liberal Party platform does not address fish farms at all.

The audience was mostly polite, but at one point Killawee was heckled by an audience member, and he asked for respect, as he made the effort to speak openly with a skeptical group.

The other candidates were greeted more warmly. 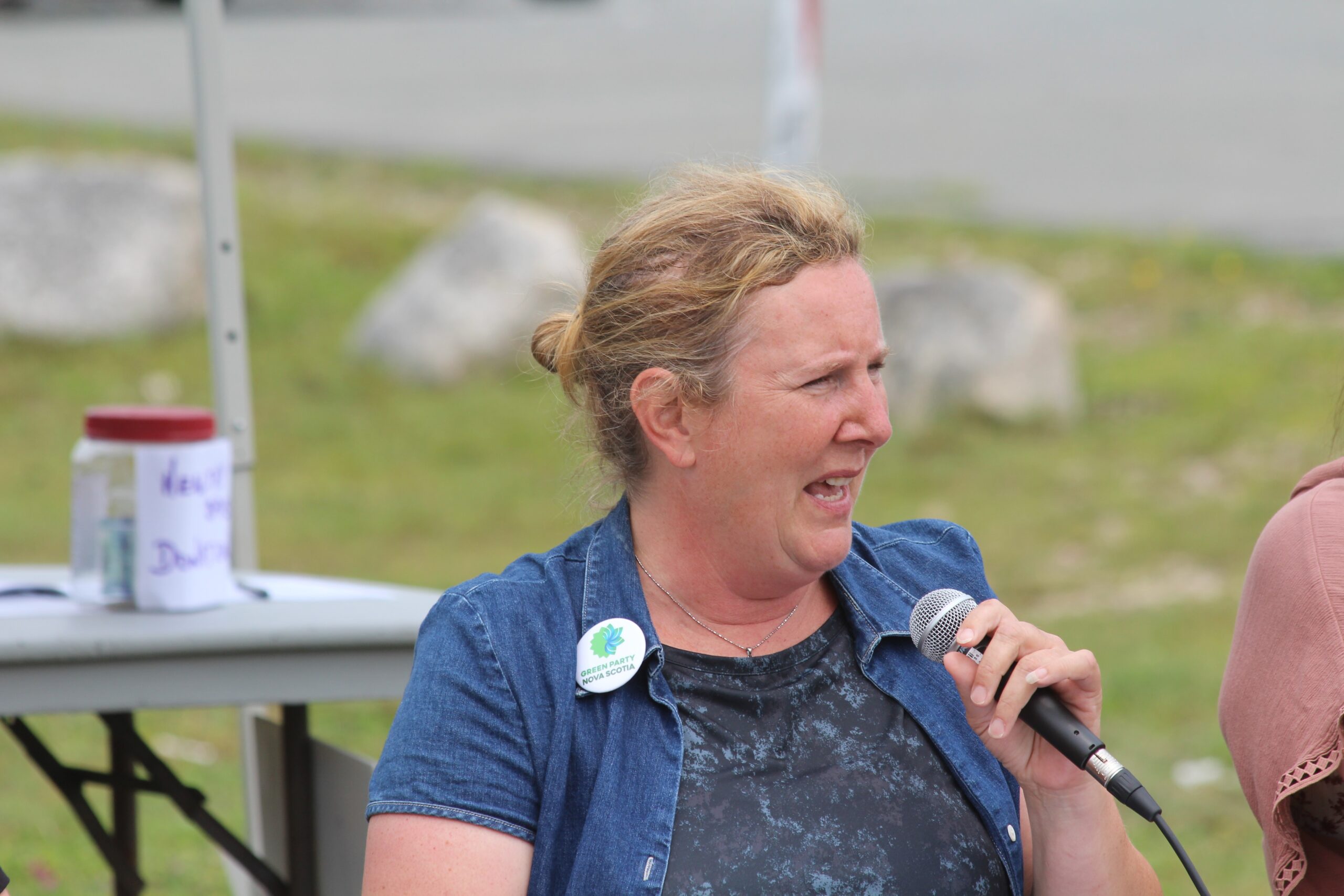 “To protect marine ecosystems and debilitated wild salmon populations, our only choice is to move fish farming out of the water,” she continued. “Fish farms are often perceived as necessary, given that there’s increasing pressure on food security, given the depletion of wild salmon stock, as well as the stock of other species that have been a foundation of our fisheries in Nova Scotia. We even lack regulations that when infectious diseases or parasites are present or a die off occurs, that the public is conveniently informed. The numbers — 264,750 metric tonnes of traditional seafood harvested in Nova Scotia in 2019. This traditional fishery has an economic value of $1.5 billion. Farmed salmon biomass in Nova Scotia, 7,361 [metric tonnes] in 2019, worth $70 million. So we’re risking a massive economic value, a massive and tenuous resource, and we’re putting it at risk for something that’s actually quite small, not only dangerous, but kind of not worth it — this is my point.“ 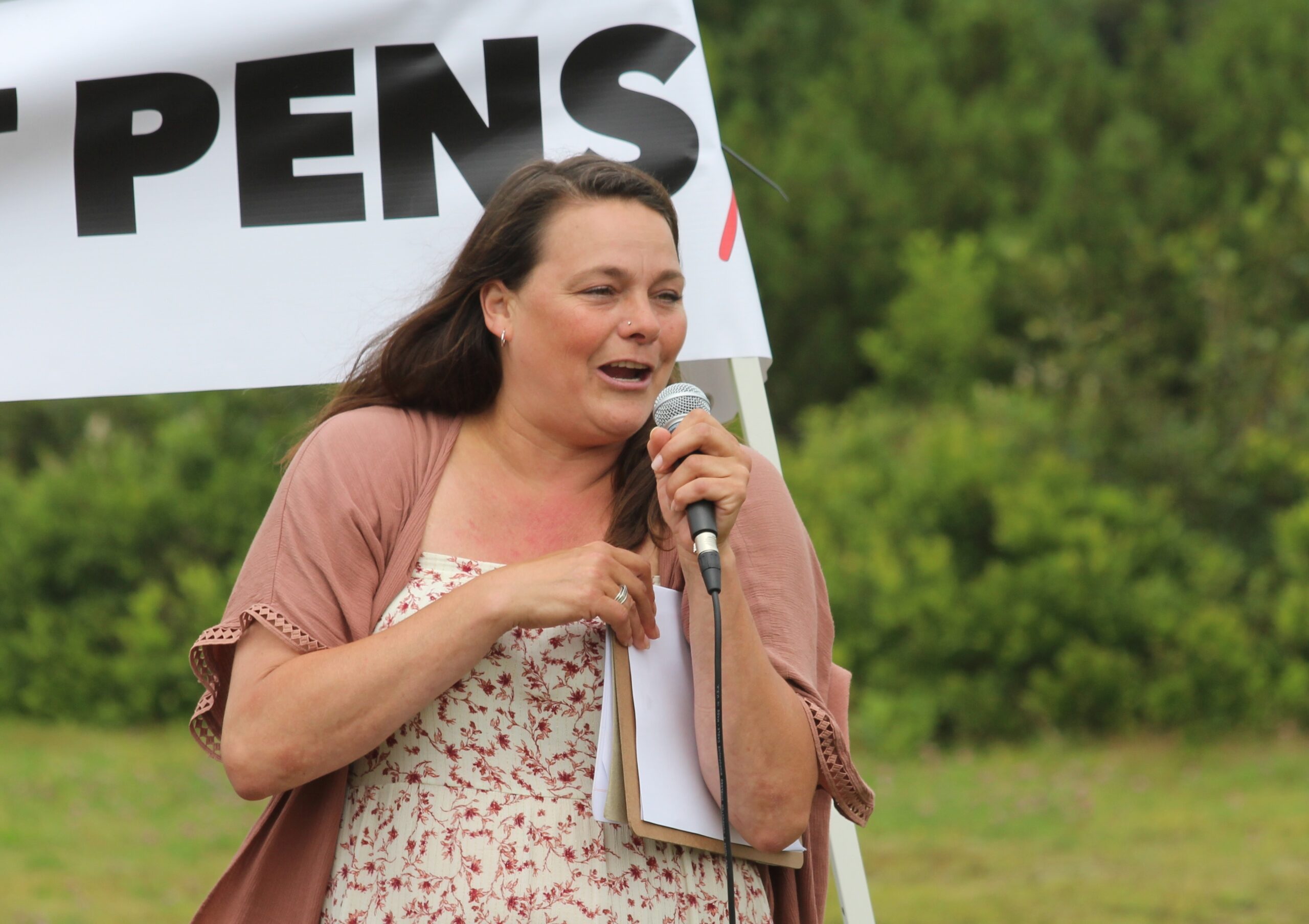 Danielle Barkhouse, the PC candidate, is the councillor for Chester, where she joined the successful effort in opposition to Cermaq Canada’s proposed expansion into Atlantic Canada.

“We need to go back to the Doelle-Laheyy report,” said Barkhouse, referring to a 2014 report to government written by Dal profs Meinhard Doelle and William Lahey (Lahey went on to write the provincial forestry review). “That was very clear: open-pen farming should not be allowed unless they can prove it is low impact, high value added. This industry is the opposite. It has high impact on our banks and harbours and low value added to our economy. Open-pen farming is not compatible with the existing uses of our bays and harbours… and it adds low value to the economy. Open-pen farming is not compatible; it just isn’t. Imagine a big mink farm next to an elementary school, thousands of minks full of disease and lice and feces. And imagine if they escape and and they start mating with the closest species to them… We would never allow that.” 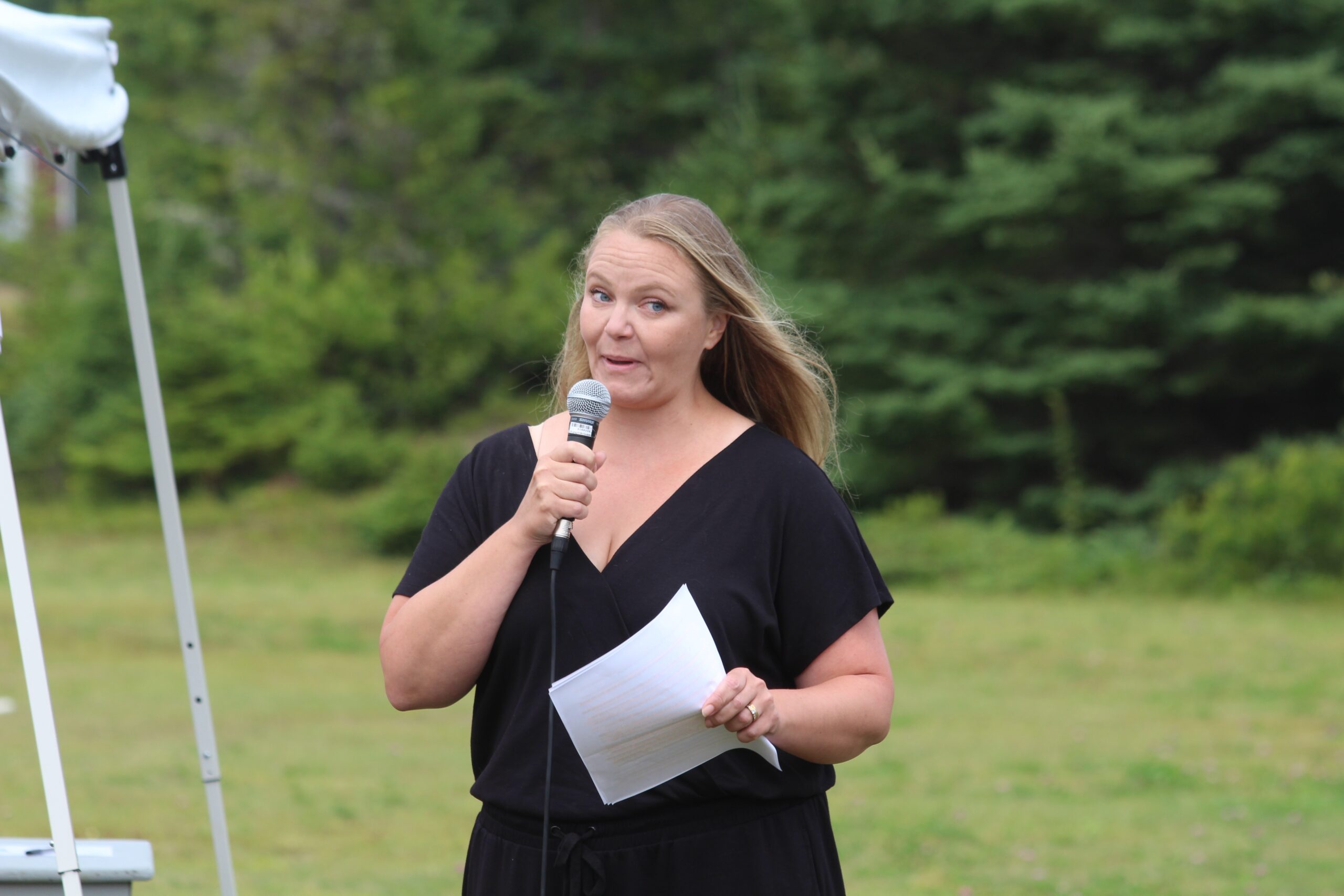 “The electoral district of Chester–St. Margaret’s has been on the front line of aquacultural debate for decades,” said NDP candidate Amy Reitsma. “And I know this because I grew up swimming in Redmond’s Cove in Seabright, and I remember when an open-net pen fish farm appeared there. I was very young. I wasn’t aware of the politics behind it, but I was aware that the water changed. The colour of the water changed from clear to brown. I went swimming there a couple of times with my sisters — don’t tell my mom, I wasn’t supposed to but I did — and the feeling of the water on my skin was different. It felt oily, it felt dirty. It smelled funny. When I got out of the water, we were itchy. We didn’t see as many fish in the water. There weren’t as many birds on the surface of the water. There weren’t as many boats in the cove. The whole cove felt different. It felt dead. There was green sludge that was washing up on the beaches. We eventually stopped bringing our dogs down there. We stopped going down there… That was almost 30 years ago, and we are still having this debate about open-net pan fish farms. We know, I know, we know they are unsafe for our ocean and for our people.“

“The industry has some serious problems,” continued Reitsma. “They have no social licence, no permission from us, the people of Nova Scotia, to put their pens in our waters… It’s our environment that suffers. It’s our quality of life that is affected by the 24/7 grinding of the generators. We see the sea lice proliferate. It’s our livelihoods, the lobster and the tourism industries, the backbone of our provincial economy, the sacred economy that are threatened. And it’s we who see to the disastrous effect the pens have on the endangered wild Atlantic salmon — everywhere there are open NetSpend farms, the wild salmon disappear.

“The company operating the Baywater pens, with zero public consultation, which is required by law, quadrupled the size of their operation years ago,” concluded Reitsma. “Only now, years after the fact, are they coming to you to say, ‘Oh, we need your OK to do what we’ve already done, so please lend us your support.’ Who does this help? It does not help us. It helps corporate greed.”