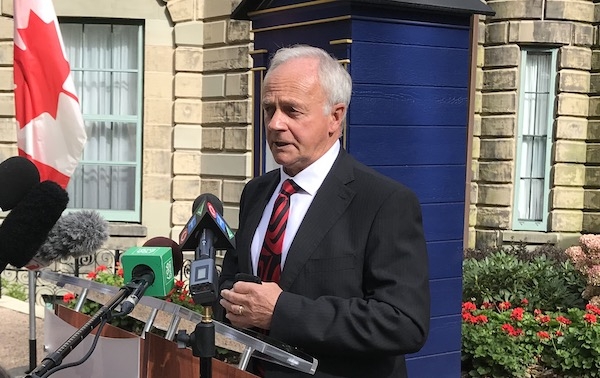 Premier Stephen McNeil has appointed one new minister and shuffled responsibilities among existing cabinet ministers to fill the gaps left by three ministers who have resigned their responsibilities to campaign to become the next Liberal leader and premier.

Former Health minister Leo Glavine, who held the job from 2013-2017, is back at Health in the top job, replacing Randy Delorey. Glavine faces some formidable challenges, after 53 people died at one nursing home during the first COVID-19 outbreak and the failure of the Liberal government to so far develop a long-term plan to care for fast-growing numbers of elderly people.

There are currently more than 1,500 people waiting for admission to a long-term care facility, a number which grew by approximately 300 since March, when most homes weren’t admitting new residents for fear of spreading the virus. Ninety beds are being held vacant at Northwood to avoid the double-bunking and communal bathrooms identified as one factor in the death toll between April and June. Ninety beds are the equivalent of losing one full-size nursing home. Meanwhile, people too weak or frail to continue to stay in their homes are ending up in hospital, occupying beds normally used by patients recovering from surgeries.

“How will you tackle the growing waitlist for long-term care affecting hospitals and nursing homes struggling with COVID?”, the Halifax Examiner asked the newly appointed Glavine.

“When I started as Minister of Health in 2013, there were about 2500 on the wait list. We got that down to about 1,000,” replied Glavine following the swearing-in ceremony Tuesday. “COVID has obviously impacted that. Nursing homes were not wanting to take patients from the community or even from hospitals for a period of time. Dr. Kevin Orrell, the deputy health minister, has a plan. Getting our seniors out of the hospital and into the nursing home beds that are available is certainly a top priority and one that will see some gain in a relatively short time.”

“How?” asked the Examiner.

“Simply that we now have a number of nursing homes that can be refilled,” replied Glavine. “Especially for people in hospital and that will help on the acute care side.”

“There is that number that is there,” admitted Glavine reluctantly. “I think home care is very good and many are being looked after very well at home while they wait to get into long-term care.”

“Will you push pause on withdrawing funding from nursing homes that have too many vacant beds?” asked another reporter.

“I still have to be briefed but as long as we keep stabilization of the COVID issue, homes will be taking new residents,” confirmed Glavine.

In mid-September, the deputy health minister issued a directive to nursing homes requiring them to begin filling beds or risk losing government funding if they operate with more than a 3% vacancy rate. Numbers provided by the province suggested the overall vacancy rate for the 7,000 nursing home beds in the system was running at 7.7%. Reducing the overall number of vacancies from 7.7 to 3% would mean opening up places for 329 people on the wait list — an incremental improvement that would essentially take the wait-list back to where it was last March: just under 1200.

Nursing home directors were wary of the directive because keeping some beds open had been a defence that allowed them to isolate a resident if the virus emerged. A review of Infection Prevention and Control (IPAC) procedures and staffing at 133 long-term care facilities found that just over half the homes (58%) had single rooms. That means 42% of homes with disabled or elderly residents will continue to share rooms and bathrooms until the Department of Health opens new facilities with single rooms that meet 2007 standards.

Funding and construction of approximately 300 new rooms is underway but will still fall woefully short of ensuring every resident has their own room: a standard both PC and NDP leaders say they would commit hundreds of millions toward if their party forms the next government.

It’s fair to say not even a new minister can put a happy face on the hundreds of people waiting for long-term care.

Meanwhile, what’s happening with two outbreaks of COVID-19 in New Brunswick that have infected 82 people over the past week and locked down two nursing homes — one in Campbellton and one in Moncton — should become clearer later today when Dr. Robert Strang and the premier hold a briefing. All Chief Medical Officers of Health for the Atlantic Bubble conferenced yesterday.

The next biggest promotion saw Immigration and Acadian Affairs Minister Lena Metlege Diab assume the Advanced Education and Labour portfolio. It’s a good fit for Diab, who says she is “excited and grateful” to use the opportunity to try and keep more international students following graduation. Diab inherits the Advanced Education job from Labi Kousoulis, who was the first to chase the premier’s job.

Cape Bretoner Derek Mombourquette, Minister of Energy and Mines, becomes the next minister responsible for Lands and Forestry. There have been so many different people in the post over the past seven years you need a program. Mombourquette replaces Iain Rankin, who is running for the Liberal leader’s job. Rankin had replaced Lloyd Hines who took over from Margaret Miller.

One new cabinet minister was sworn in yesterday. Lunenburg MLA Suzanne Lohnes-Croft becomes the Minister for Communities, Culture, and Heritage. That responsibility had been carried by Leo Glavine but he will shed that as he moves to tackle the big job at Health.