You are here: Home / Environment / Last Hope camp wraps up time at Beals Brook after province scales back planned cut 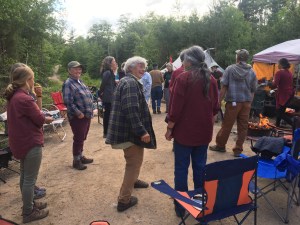 On Tuesday, a group of citizens who set up camp off a remote dirt road near Highway 10 in Annapolis County back in December declared partial victory, believing enough of the area was now under provincial protection. The group, which had spent 202 days at the site, enduring the elements, including blizzards and knee-deep snow, was working to prevent a small wooded area at Beals Brook from being cut.

They wrapped up their time in the woods with a summer solstice and National Indigenous Day celebration. Though they had sought to have the province’s logging approval revoked entirely, the campers were satisfied with added protections following the discovery earlier this year of three at-risk species of lichen: Black-Foam, Wrinkled Shingle, and Frosted Glass lichens.

Nina Newington has been involved with the camp since day one.

“Where government is failing to protect the natural world we all rely on, citizens are stepping up. That is the big message of our Last Hope camp,” she said in a news release Tuesday. “Government biologists sit behind their desks, signing off on harvests. Ministers hand off decisions to industry. But citizens, working with Indigenous traditional government, are saying no, we do not consent to the ongoing destruction of nature.”

The approved cutblock, located near Beals Brook, originally covered 24-hectares of land. But the province reevaluated the area in January after rare lichens were discovered on trees around the site. These species-at-risk require a 100-metre buffer from harvest operations. When applied, the total approved area was reduced to about 10 hectares, protecting about 60% of the site’s forest. 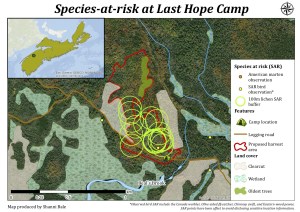 Map of the modified harvest plan for the cutblock near Beals Brook. Map contributed by Shanni Bale

The Last Hope camp, as the protestors dubbed it, started after local Randy Neily discovered a small piece of forest near his backwoods cabin had been provincially approved to be harvested by WestFor, the consortium of mills that leases a huge swath of Crown land in southwest Nova Scotia. Concerned that the surrounding land was already heavily harvested and any further cutting would deplete wildlife habitat — wildlife like endangered moose, pine marten, and wood turtle — Neily spread the word.

For the next seven months, the campers set up on the side of the road, blocking access to the site and playing host to visitors from around the province. They wrote to both the Department of Natural Resources and Renewables (DNRR) and WestFor, asking that harvest plans be dismissed or abandoned, but say they received little response from either party during that time.

The biggest victory for the protestors came in January when a visitor discovered three species of rare lichen on trees in the area. News of the discovery quickly got to the province and harvest plans were put on hold and eventually modified after a follow-up survey. Over the next two months, campers continued surveying the site themselves, discovering additional at-risk lichen. Ultimately, 17 occurrences were found, each requiring a 100-metre buffer.

“It’s confirmation that this forest is an important ecological forest,” Newington said at the time.

“What it really tells us is there’s not very much monitoring going on before they go in and cut because if we weren’t camped here, this would already have been cut.”

That sentiment was echoed by Frances Anderson, a lichen expert who co-authored a book on North America’s northeastern lichen.

“All the at-risk lichens identified in this forest depend on undisturbed, continuous habitat,” she said in Tuesday’s news release. “Given the government’s pledge to protect 20% of our lands and waters, we should be saving whatever is left of old forests like this one on Crown lands. There are few forests left on Crown that are over 80 years old — it would be such a simple step for government to save them. This forest and its at-risk lichens would have been lost without the dedication and vigilance of the campers.”

Now that protestors are moving out, the Department of Natural Resources and Renewables says the modified harvest approval is still in place should WestFor still desire to cut. A department spokesperson also said in an email that the planned harvest “meets the department’s new ecological forestry standards” and the province is working to improve habitat modeling and surveying for at-risk lichens.

The remaining area is approved for a shelterwood cut, which would allow about a third of trees to be harvested. Paths would also have to be cleared for logging roads. Shelterwood cuts, while more sustainable on the surface, can be equivalent to clearcuts if the trees left standing are harvested too quickly after the initial harvest.

The Examiner reached out to WestFor for comment on its plans but did not receive a response.

In a phone interview this week, Newington said protestors decided to leave the camp once they were satisfied no more at-risk lichen was present in the areas still approved for harvest. She said they also felt the remaining 10 hectares likely didn’t have the economic viability to be worth WestFor’s time.

The protestors aren’t done, though. Last Hope camp will now become the Last Hope Campaign. The former campers will put their energy into educating people around the province on how to protect forest stands in their communities. This new chapter will teach people to identify at-risk species and the different types of trees, navigate the woods, and find harvest plans and cutblocks online, among other things.

Essentially, this new phase will provide others with the tools to protect biodiversity and forest health in their own neck of the woods.

“We know what’s going to happen if we don’t get engaged,” she said. “It’s going to be cut now and protect later.”

One problem, Newington said, is that the province is evaluating proposed harvests on a site-by-site basis instead of looking at the bigger picture that individual cuts impact. She said the lands surrounding cut proposals should be considered for depleting soil health, past harvests, and the shelter they provide for animals migrating through the province.

Newington also said that while she sees progress from the province and industry in moving toward sustainable forestry, she’s skeptical, and protestors are prepared to return to the camp should things change.

“I don’t think (WestFor) or the government are doing a very good job of recognizing that we’re in an emergency.”