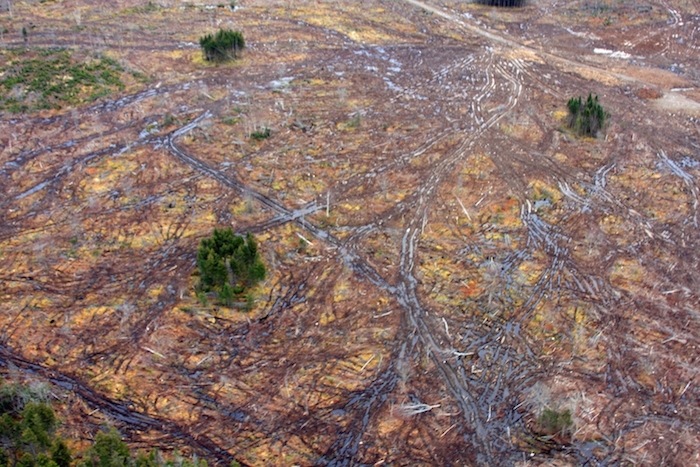 “Your Liberal government has frozen clearcutting on Crown lands.”

That untrue statement appeared in an ad for Liberal candidate Labi Kousoulis in the current edition of The Coast, the free weekly paper read by tens of thousands of voters in Metro Halifax. Kousoulis, the Liberal candidate for Halifax Citadel-Sable Island, has not returned calls urging him to explain the statement.

The Liberals have not frozen clearcutting. Crown lands continue to be clearcut at a rate of 80-90 per cent, according to the latest 2015 statistics supplied by the province to the National Forestry Database. Crown forests being harvested include those that were formerly owned by Bowater Mersey, now being logged by companies in the WestFor consortium and Northern Pulp. The companies are working under temporary leases from the McNeil government, which expire this September. 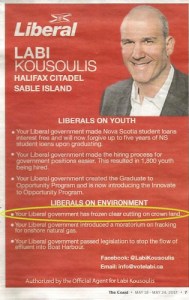 Stephen McNeil refused to answer a direct “true or false” question posed by the Halifax Examiner about the clearcutting statement advertised by the Liberal candidate. Instead, McNeil reiterated that the Liberal platform has promised to delay or “freeze” the granting of long-term, 20-year leases to the same companies cutting today. The long-term leases won’t be signed until another review of clearcutting practices has been carried out by an independent expert the Liberals will appoint.

“The statement in the ad — you would have to ask Mr Kousoulis about (it),” insisted the Liberal leader. “He could tell you what he meant by what he put in the ad. That’s not an ad that I would have authorized; that would be his ad.”

While The Examiner awaits an explanation from Labi Kousoulis or his campaign manager, one of his political rivals weighed in.

“Why is Mr Kousoulis, in the last week of the election campaign, putting out a statement which is misleading?” asked Rob Batherson, Progressive Conservative candidate for Halifax Citadel-Sable Island. “The ad is misleading because if you read the Liberal platform, it says they will hire an independent expert to review the appropriate level of clearcutting on Crown land. So it begs the question if my Liberal opponent is prepared to mislead on that, what else are they misleading about?”

McNeil was asked if he was concerned that readers of The Coast (especially youthful voters) could find the tree-hugging ad misleading.

“I am continuing to move forward and engage Nova Scotians,” he replied.  “I’ve heard from both those who are concerned about what’s happening on Crown land and from those who have private lands who don’t have access, so there are conflicting stories.”

Asked if he thought the clearcutting statement by Liberal candidate Kousoulis was inaccurate, NDP leader Gary Burrill said he was unsure. Then he went on to say that even if government policy had changed overnight to “freeze” clearcutting on Crown land, a great deal of damage has already been done.

“Whatever they choose to put in an ad anywhere,” said the NDP leader in a scrum today, “the primary thing that has happened about clearcutting under the McNeil Liberals is the reduction harvest limits of 50 per cent over five years were obliterated. So they may today or yesterday announce one, two, or three reviews, but it doesn’t change the fact that the primary thing they did was get rid of the clearcutting reduction targets and again make it possible for whole-tree harvesting to proceed…both of which were grade A mistakes.”

UPDATE, 9:15pm: Labi Kousoulis still has not responded to our request for comment, but we did get a response from Liberal spokesperson Brynn Langille, as follows:

Labi is not available for comment at this point, please see below for a statement on his behalf to clarify the ad in question:

The ad is meant to highlight the fact that a re-elected Liberal government will appoint an independent expert to review our forestry practices. The review will get underway immediately, and no future long-term timber harvesting licenses will be awarded on Crown land until that work is complete.