You are here: Home / City Hall / It’s time to rethink the rules of the road 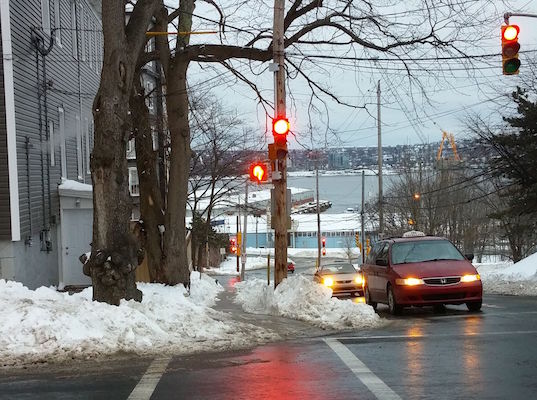 On Thursday evening, the Halifax Cycling Coalition (HCC) is starting a much-needed discussion by inviting citizens to give their two cents on a long list of possible amendments to Nova Scotia’s rules of the road. At the top of the list is renaming the 1989 act to something that reflects all road users. Think “Road Safety Act” instead of the somewhat misleading current title: Motor Vehicle Act.

The proposed amendments focus both on increasing safety for cyclists and vulnerable road users, and increasing efficiency for bikes and other traffic.

The most obvious changes needed, says HCC board member Paul Calderhead, are definitions. “That’s just a modernizing thing – bringing the legislation up to date with what people are using to actually get around right now.”

That includes defining e-bikes, and the various sub-categories of e-bikes. But it also includes defining things like bike boxes (a painted box at an intersection designated for bikes to queue in, and therefore remain highly visible) and separated bike lanes. 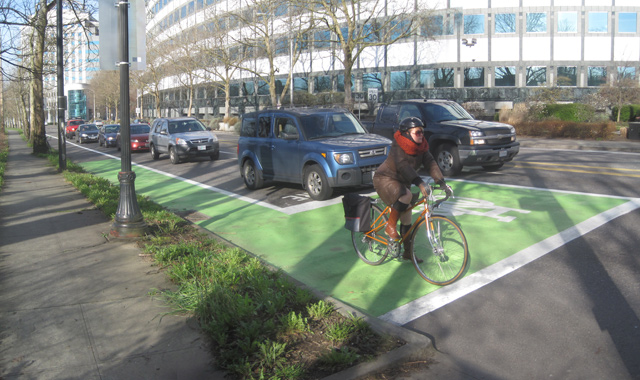 Proposed changes to the Motor Vehicle Act would include definitions of a bike box, though it would still be up to municipalities to actually build them. (Photo from nacto.org)

“Defining things and making clear who has access to infrastructure, who can go where – I think that’s part of what they were doing with the Segway thing, but I think it can go much further than that,” says Calderhead.

It was just over a month ago that the province passed a very specific set of changes that officially allowed Segways (defined as “personal transporters”) onto our sidewalks. So one would expect these HCC proposals to at least get some consideration from Minister Geoff MacLellan and the Department of Transportation and Infrastructure Renewal (NSTIR). The Segway amendment, says Calderhead, shows NSTIR is “willing to listen to groups that are not the majority but have an interest nonetheless in what the Act covers.”

Creating the right definitions is important stuff, and so is putting the power in the right place. Two of my favourite amendments on the HCC list involve allowing local authorities to establish rules specific to local areas.

For one, allow municipalities to set speed limits lower than 50 kph where necessary. Of course we know that speed limits do not always reduce actual speeds, but at least they set a collective standard for what we think is reasonable. And 50 kph on my street – lined with dense housing and filled with people of all ages – is not reasonable. Right now, Minister MacLellan has the power to lower the speed limit in my neighbourhood. The HCC is proposing, and I agree with them, that that responsibility should lie with local authorities. (Quebec already allows local boroughs to determine safe speeds for their neighbourhoods.)

Another involves allowing municipalities the ability to designate certain sidewalks or crosswalks as trails, and therefore make them legally accessible by people on bikes. This manoeuvre alone could help Halifax transportation planners make valuable connections in its fragmented bike network. As with speed limits, local authorities stand the best chance of knowing what’s needed and acceptable at a neighbourhood level.

But not everything will be as simple as agreeing on terms or shifting authority. Some amendments involve re-thinking rules of the road, and differentiating between at what’s safe behaviour for people in cars versus what’s safe for people on bikes.

Here’s a sampling of what’s on the list of proposals up for discussion Thursday night: 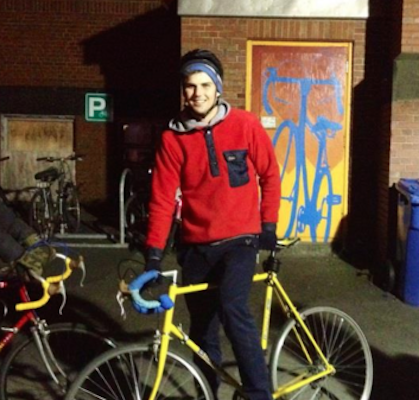 Paul Calderhead is on the HCC board and one of the volunteers who assembled the amendments up for discussion Thursday.

The HCC hopes to have close to 40 proposed amendments up for discussion on Thursday, and will ask anyone willing to drop by to weigh in with a “yay,” a “nay,” or a “huh?” if they need more information.

“I hope we’re going to get input from not just cyclists, but from motorists and pedestrians,” says Calderhead.

After Thursday, the HCC will review all comments and feedback, and then send the package off to the provincial government.

“I’d like to see the province pick it up and do some public consultation across Nova Scotia,” says Calderhead.

The HCC meeting is at the Central Library BMO Room on Thursday, January 21st, from 5:30pm to 8:45pm.