You are here: Home / Commentary / In Nova Scotia, pulp rules; it always has and until the forests have nothing left, it always will 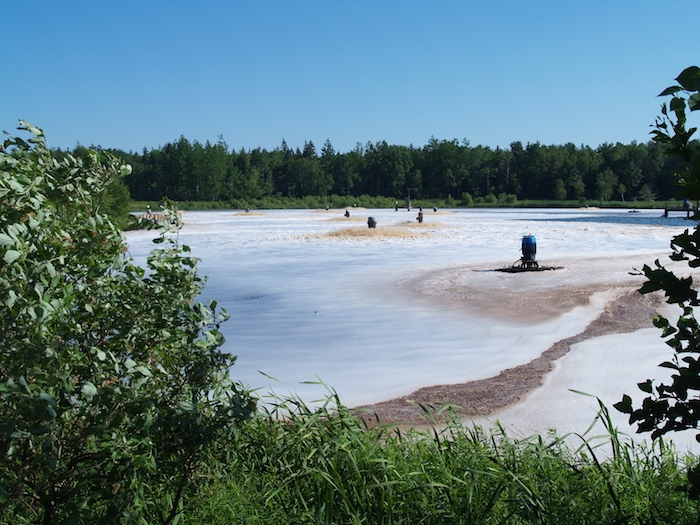 The stabilization basin of Boat Harbour. Photo by Joan Baxter

Tomorrow, Premier Stephen McNeil is going to hold a news conference to announce his intentions regarding the legislated deadline for closing down Boat Harbour as Northern Pulp’s waste lagoon.

In 2015, his government, with all party support, passed the Boat Harbour Act, which stipulates that the Abercrombie mill needs to have a new treatment facility up and running by January 31, 2020 when Boat Harbour is slated for clean-up.

Prior to the 1960s the once pristine tidal estuary was so frequented by the Mi’kmaq of Pictou Landing that they referred to it as “the other room.” That is, until pulp came to town. In the 1960s the government courted Scott Paper with numerous enticements, including artificially inflated forest inventories, and managed to receive the approval of the Pictou Landing First Nation at the time using outright lies, promising that the waters would remain unpolluted.

Overnight, Boat Harbour was transformed into the bleached Kraft pulp mill’s waste lagoon: where the brown, frothy, toxic waste containing some of the world’s most dangerous chemicals flowed, carrying carcinogens such as dioxins and furans and heavy metals such as mercury, zinc, cadmium, and chromium.

As a result of the 2015 law, the mill has had five years to come up with an environmentally sound and scientifically defensible plan for treating its fluid waste. Its idea to build an activated sludge treatment facility and pipe the treated effluent directly into the Northumberland Strait has become a flash point — pitting fishermen, who don’t want to see their lucrative lobster fishing grounds turned into a dead zone, against pulp mill and sawmill workers, who say the industry won’t be able to survive a blow the size of Northern Pulp closing.

Earlier this week, the Minister of Environment, Gordon Wilson, announced that after reviewing the company’s Focus Report (its second try at ensuring the health and environmental safety of the waste plan) there still wasn’t enough information to “properly assess whether there may be adverse effects or significant environmental effects on fish, air, water resources, and human health.” Wilson said a full (Class 2) Environmental Assessment is required — a process that could take upwards of two years.

The company, the union, forestry workers, and indeed the forest industry itself, have been calling for an extension to the Boat Harbour Act, and say that without it, the mill will have to shut down, laying waste to an entire industry.

With this week’s announcement, forestry workers are not only pitted against those in the fishery, they are now pitted against Pictou Landing First Nation, a marginalized people that have, for 50 years, experienced a betrayal of their trust and a destruction of their way of life that would be unimaginable, except that we have Boat Harbour as a daily reminder of this toxic and shameful legacy.

In the 1990s, I was living near Temagami, a small town in northern Ontario that had become famous for both its rare and majestic stands of old growth red and white pine trees and for the protests over cutting them down. In 1997, an old growth stand at Owain Lake was to be opened up for both logging and mining. Protests erupted and one local politician, who favoured the development because he said it would bring employment and investment to the area, organized what he called a “unity” rally to show that the “north” was united against its meddling environmentalists. At one of these rallies, which I covered for a local magazine I was writing for at the time, a placard read: “Once you hug a logger you won’t want to hug a tree.” In a way, it defined the northern response to the land-use debate in the Temagami area, and something about it resonated for me. The issue had been distilled in the mainstream media as a battle between the environmentalist and the logger. But was it really?

By 1998, I was living in Nova Scotia and I heard about a group of inshore hook and line fishermen who had chained themselves to a flagpole on the lawn of the provincial legislature in Halifax and had posted a sign on their tent that read, “We need fish.” It was the culmination of months of protests by hundreds of fishers across the province over new DFO rules they say were squeezing out the little guy. “The Flagpole Four,” as they were called, said the government wasn’t giving them enough quota to feed their families. One of those men was Scott Nickerson and later that year, in an act of desperation, he killed himself with a rifle.

The tragic story of “The Flagpole Four” is for me, proof that simple dichotomies — like the ones that have formed in Pictou between fishermen and forestry workers, between forestry workers and the Mi’kmaq — don’t even begin to address the complexity of the issues at hand.

The truth is, while these issues make easily digestible sound bites, in reality they don’t break down over neatly defined lines like these. The pressures facing people who depend on a steady supply of “resources” for their livelihood are real, and sometimes tragically so.

But just as real is the pressure we put on the “resources.” The broader analysis of the economic system in which the fishery or forestry takes place — one that demands limitless growth on a finite planet — and one that often pits big business and profits against small communities, is noticeably absent from the discussion. The real battle hardly ever makes it onto our radar screens.

If I were a betting man

Let’s consider the backdrop: In the 1960s and 1970s a structure was forged in this province where preference was given to big industrial pulp and paper players through favourable policies. Scott Paper benefited from it, Stora Enso benefited from it, Bowater Mersey benefited from it. As did all of the mill owners and configurations that followed. There have always been alternatives to playing the pulp game but these have always been undermined and sabotaged by one government after another, no matter what political stripe. I’ve written about this here, here, and here.

Given that successive governments have bowed to pulp interests, and given that it’s not an overstatement to say that for decades the province has been held hostage by the industry’s demands — damaging so many of our prospects to restore the forests, protect forest-dependent species at risk, and ensure a viable, long-term, plan — my spiny sense is on high alert.

For me, it’s not inconceivable that Minister Wilson’s decision, to require a full EA, was intended to play into Northern Pulp’s hands. The pulp market is a volatile one and the mill owners have always resisted modernizing its antiquated infrastructure. Why would this be any different? If there’s an extension to the closure of Boat Harbour, this will give the company two more years to get as much wood out the province as possible without having to modernize much of anything.

To put it another way, why would they add what they consider a state-of-the-art treatment facility to a decrepit and badly aging mill if they don’t actually have to, especially when the industry faces such an uncertain future?

The other point worth considering is what might happen if the mill does shut down operations because it has no way to deal with its waste. I can only imagine the swat team of lawyers the company would call on to recoup the mill’s anticipated but lost profit potential, because let’s not forget that being fully steeped in the realities of free trade and neoliberalism means that investor rights trump nearly everything else. A government’s ability to make democratically based decisions in the best interests of its citizens is now severely constrained by what’s called the Investor-State Dispute Settlement process.

Then there’s the premier’s statement from yesterday, in which he clearly sends a signal: “Our government now faces a very difficult decision — whether to give the company an extension to allow it to do the work necessary to prove it can operate in an environmentally sound manner, or let the Boat Harbour deadline stand, effectively shutting down the mill.”

Notice, there is no mention made of the 50 years of betrayal and broken promises experienced by the Pictou Landing First Nation. No mention of the environment. Only the mill and the mill’s future is mentioned.

In this province, pulp rules, it always has and until the forests have nothing left, it always will.

If I were a betting man I’d say Premier McNeil is going to allow an extension to the Boat Harbour deadline.

For the first time in all my years of reporting on forest issues, I really hope this time that I’m wrong.