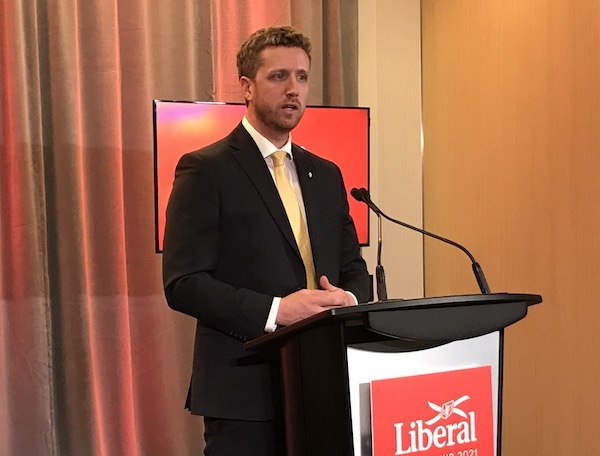 Iain Rankin is the new Liberal leader and will be sworn in as Nova Scotia’s 29th Premier.

The 37-year-old former minister of the Environment won on the second ballot with 52.4% of the total weighted vote. Halifax MLA and Labour Minister Labi Kousoulis was second with 47.59%t. Former Health minister Randy Delorey finished third.

“This is about the next generation and what people want to see next,” said the red-haired winner whose cousins include Cape Breton’s musical Rankin Family and whose father Reg was a long-serving HRM councillor.

“They want to see action on climate change and see us continuing on the path to right historic wrongs.”

Rankin is the second youngest premier; Conservative Rodney MacDonald was in his twenties when he was elected. Rankin has an ambitious agenda which includes moving the province off coal by 2030 (10 years earlier than forecast), investing more in long-term care, and tackling systemic racism.

Rainkin was the only one of the three leadership candidates to publicly disclose his campaign contributions, which totalled $130,000.

Rankin says his first priority is to work hand-in-hand with Dr. Robert Strang to curb Covid-19.

How it went down

A total of 8,100 people who paid $20 to become a delegate to the virtual leadership convention voted online or by telephone this past week. It was the first Liberal leadership election in 14 years.

The process: All 55 ridings or electoral districts were allocated 100 points. The leadership candidate who scored 2751 points (more than 50%) became the winner.

Because none of three candidates hit that total on the first ballot, the candidate who finished third dropped out.

Delegates who had marked Delorey as their first choice for leader, then had their “second choice” vote allocated to one of the remaining two leadership candidates.

The results were announced and broadcast online in real time from a room at the Halifax Convention Center.

Each leadership candidate, their family, and campaign team were sequestered in separate rooms in keeping with guidance from Public Health. There, they watched a 16-minute video tribute to outgoing Premier Stephen McNeil and awaited the election results.

McNeil, who was not in the building, expressed his thanks to the party faithful the and his family in a pretaped video statement.

“This is not the convention as Liberals we had hoped for,” McNeil acknowledged. “We wanted to celebrate and show a little Liberal love. But COVID intervened and a small, virtual convention is a small price to pay to keep us all safe.”

I’ve been to wakes that were more fun.

Journalists were corralled in a separate room where we watched the results of the voting on TV screens. (Everyone got COVID tests on the way in to the convention centre, again, in keeping with Public Health protocols and all received negative results).

Unlike other political conventions, delegates and journalists never saw the candidates or their handlers in person. We didn’t see the faces of the candidates as the results were announced. No “kiss and cry” area. No hugs, handshakes, back pats, balloons, or funny hats during Covid times.

This was perhaps the dullest political leadership convention in Nova Scotia history.

That said, the new leader will soon take the helm at a critical time. There is hope vaccines will eventually allow life to return to normal but that is still some months away. Rainkin will inherit an operating deficit in the range of half a billion dollars this April and a tourism industry on life support.

McNeil, who was first elected 17 years ago, will stay on as MLA for Annapolis and assist with the transition until the new leader is sworn in. He says he wholeheartedly believes a third consecutive Liberal majority government is possible, provided the party unites behind the newly chosen leader. That remains to be seen.