You are here: Home / Featured / Hundreds rally for Owls Head 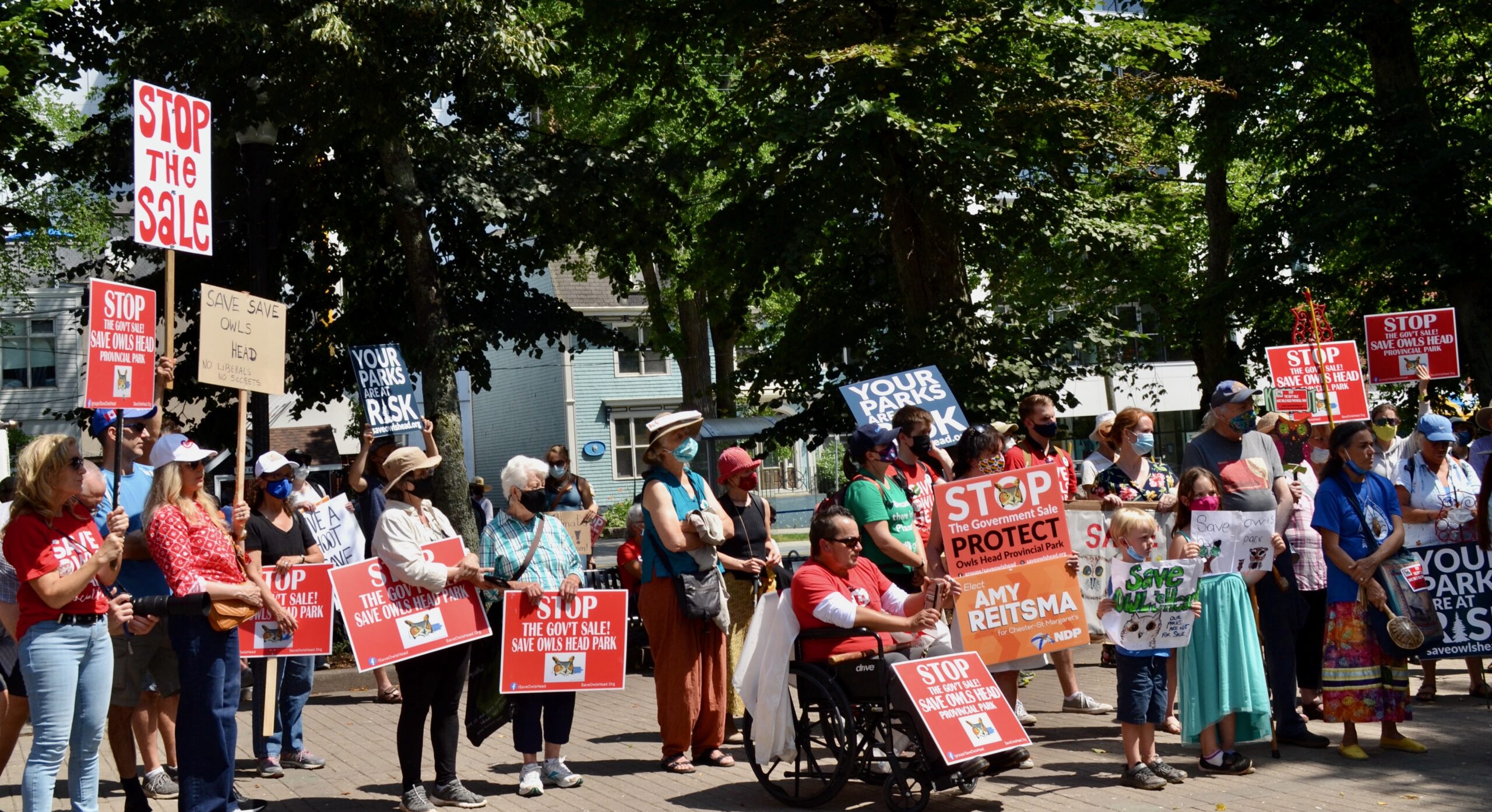 Several hundred people filled Victoria Park on Saturday afternoon to protest the Liberal government’s handling of Owls Head and to call on their fellow Nova Scotians to make their discontent known at the ballot box.

Sporting Save Owls Head shirts or hats and holding signs aloft, the ‘Save Owls Head’ rally was frequently acknowledged by passing drivers honking their horns in support.

“Sometimes an issue hits you that you say: I just, That’s it. I can’t, I can’t take this one, I can’t stomach this one,” a frustrated Christopher Trider said in an interview before the rally.

Trider was the rally’s emcee. He’s also one of the administrators of the ‘Save Owls Head Provincial Park/Little Harbour From Becoming Golf Courses,’ a Facebook page that currently boasts more than 9,400 members.

Located on the Eastern Shore, the 268 hectares known as Owls Head provincial park was on a proposed list of protected places.

That changed when it was delisted by the Treasury Board after an American developer expressed interest in buying the land to develop a golf course. Premier Iain Rankin was the province’s environment minister at the time, and before becoming an MLA had received a golf club management diploma.

The Owls Head delisting only came to light after CBC reporter Michael Gorman broke the story in December 2019 using information obtained through a Freedom of Information request.

The outcry about the delisting of Owls Head and the secrecy surrounding it has been far-reaching. It led to heated exchanges during a CBC leaders’ debate and as reported on Friday in the Halifax Examiner’s Morning File, the issue was also raised during the CTV leaders’ debate on Thursday night.

Rankin took some heat from PC leader Tim Houston and NDP leader Gary Burrill when CTV host Steve Murphy asked ‘What is the future of Owls Head under a Liberal government?’

“The process is important,” Rankin said in response, echoing his messaging during the CBC debate eight days earlier. “And it is important we listen to communities, in this case Little Harbour. It (Owls Head) was on a list for consideration to be protected and now it’s being reviewed to see if we should protect it or entertain a potential project.”

An online petition calling on the government of Nova Scotia to formally protect Owls Head provincial park and all remaining properties awaiting designation currently has more than 30,000 signatures, while a paper version to be submitted to the provincial legislature has several thousand. Organizers collected many more signatures in downtown Halifax during the rally.

“I had been a public servant for 21 years and I’d seen some pretty egregious things, but I have never seen anything as rotten as this deal, a deal based in deception, deceit, arrogance and lies,” Trider said, shaking his head.

“I want the public in Nova Scotia to see what has happened and what this represents for us all in terms of honesty, integrity, and transparency in government. Never mind all the environmental and ecological aspects of this because those should have been enough.” 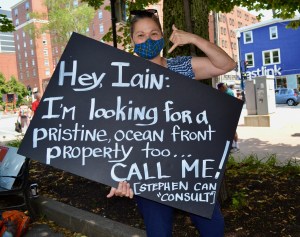 Last year, biologist Bob Bancroft and the Eastern Shore Forest Watch Association asked the court to review the government decision. They made their case in court in April (reported here) arguing that even though it wasn’t technically protected, the government had a duty to consult with the public before agreeing to sell the Owls Head property.

As reported by Zane Woodford in the Halifax Examiner last Friday — and adding further fuel to the fire — the Treasury Board decision to delist Owls Head was upheld by Supreme Court of Nova Scotia Justice Christa Brothers.

In her July 26 decision, Brothers wrote that if citizens have a problem with decisions made by politicians, they should head to the polls.

That message was heard loud and clear by those rallying to save Owls Head. They are encouraging Nova Scotians to show their discontent by voting against the governing Liberals. The crowd began to loudly chant in unison after a young child took the microphone and told them to ‘vote out red, save Owls Head.’

Bancroft was one of several guests who addressed the gathering. In a brief but passionate speech he said when he heard Owls Head was being offered to an American developer for $316 an acre and that the public hadn’t been informed of its delisting, he had to do something. 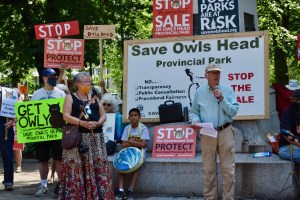 “The Nova Scotia government clings to an economic growth model that attaches more value to wild habitats when they become golf courses, and forests have more value as wood piles, and the wildlife just keeps getting in the way of so-called progress,” Bancroft said, pausing as the crowd began clapping and whistling.

“Cheers. I’m mad too. Jane Goodall put it succinctly. We’re trashing the planet. Actually, if you want to think about economics, former Bank of Canada Governor Mark Carney recently called it trading off the planet for profit.”

Bancroft urged Nova Scotians to demand action, stating that Justice Brothers’ comment that people make their wishes known at the ballot box couldn’t have come at a better time.

“We need leadership…We can vote for candidates to pledge to stop clear cutting forests and never secretly offer ecologically important public land for private sale for a pittance,” Bancroft said.

“But I really think we need action and not words. I’m tired of hearing words. We need a government that the public can trust.”

‘Damning facts for sure’

The lawyer who represented Bancroft and the Eastern Shore Forest Watch Association in their attempt to secure a judicial review of Nova Scotia’s decision to delist Owls Head also stepped up to the microphone.

Jamie Simpson said he wanted to quote a few passages from Brothers’ ruling that he called “quite telling” about the situation. Simpson read from the findings of fact:

For more than four decades, the province of Nova Scotia represented to the public that Owls Head Crown Lands were a provincial park and openly treated them like one…The public did not learn about the delisting of Owls Head or about the conditional sale until after the agreement was signed.

If Owls Head had been formally designated as a provincial park, as was represented to the public, any change to a status as protected land would have required an order in council and would therefore have been public knowledge. Ultimately, the government’s own misrepresentation of the status of the lands shielded its actions from scrutiny and allowed purportedly protected lands to be considered for sale, out of the public eye.

“Those are damning facts for sure, and I’m glad that Justice Brothers made these findings of fact, even if she ultimately did not agree with our legal position,” Simpson told the crowd. 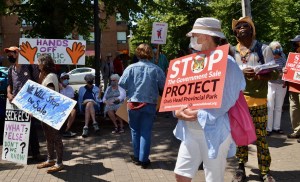 Participants with their signs during Saturday’s ‘Save Owls Head’ rally. Photo: Yvette d’Entremont

Sierra Club of Canada’s Atlantic chapter communications coordinator Tynette Deveaux also spoke during the rally. She described Owls Head as a “lightning rod” issue, adding that protecting it isn’t simply about people wanting a nice place to go for a stroll.

“Personally, I’ve never been to Owls Head. I’ve also never have never had COVID but that doesn’t mean I don’t believe that it’s a serious and in some cases deadly virus,” Deveaux said.

NDP leader Gary Burrill was also invited to address the rally. He said if elected, an NDP government would immediately pass the Owls Head Act into law. That legislation was proposed by the NDP and states no piece of land pending official protective designation may be delisted “in the absence of transparency, accountability, and public consultation.”

Burrill added they were also ready and committed to “craft a path” to the protection of 25% of Nova Scotia’s lands and waters by 2025 and 30% by 2030 – in line with international commitments. He also pledged an NDP government would stop the sale of Owls Head and extend protection to the rest of the 2013 areas listed in the parks and protected areas plan, including Owls Head.

“Justice Brothers said in that decision…something awfully important. She said this decision, what the Rankin Liberals did to Owls Head, is something that has a remedy,” Burrill said.

‘We’re going to win and Owls Head will be protected’

Pamela Baker was one of the final speakers. She and her husband live 10 minutes from Owls Head. She highlighted how she believed money could be better spent on the Eastern Shore, from sidewalks to a science centre with full time accommodations.

To great applause, she said instructors could help celebrate the environment, explain the effects of climate change, and partner with the nearby The Deanery Project to lead initiatives like student and adult kayak tours in the summer and snowshoeing hikes in the winter.

“I firmly believe that the golf course and the promise of jobs is a smokescreen to cover up the land grab of one wealthy foreigner who has already built a bunker, who has waged a campaign of buying up properties to create an oceanfront playground for himself, his rich friends and his family,” Baker said to approving hollers.

“And this present government engineered it, tried to hide it and used the people of the Eastern Shore against each other in an old fashioned game of bait and switch. My last thought. Vote. Vote like your life depends on it to replace this government.”

Mi’kmaw grandmothers were also an integral part of Saturday’s event. As the rally wrapped up, Elizabeth Marshall shared a story that left some in the crowd in tears.

Marshall, 60, said she began travelling throughout the province at the age of 16 and until recently had never once seen a bear walk out of the woods and into a ditch in Nova Scotia.

“But when I went to Owls Head I saw a female bear come out of the woods and she stopped and she looked at me and she captured my heart and I knew why I was there,” Marshall said.

In addition to the Halifax event, solidarity rallies were held Saturday morning in Annapolis Royal and Wolfville.