You are here: Home / Featured / How safe is cycling? 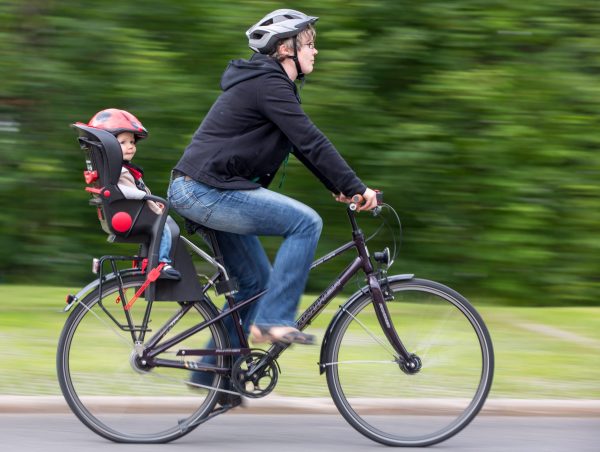 Neither me nor my kid, pictured happily cycling. Photo from Young Germany.

Everyone’s transportation choices are made based on a unique set of factors: where you live vs where you need to be on a regular basis; how much (or little) money you have to burn; what kind of cargo you normally have in tow; what kind of physical challenges you do or don’t have; etc.

Me, I live and work very centrally, so biking is easily the least time-consuming, cheapest, and most enjoyable way for me to get around for about two-thirds of the year.

But it’s not just me. I also have a kid to haul around on a daily basis. Ever since he turned one and was able to sit in a bike seat, I’ve been taking my kid with me on my bike wherever we need to go.

It’s been a great arrangement. I get some badly needed activity injected into my otherwise sedentary life, we both get some fresh(ish) air, and we get from A to B without much hassle.

But then, one beautiful afternoon last September, while biking home with my kid from his grandparents’ house in Halifax’s west end, we were struck by a turning vehicle in an intersection. I received foot and leg injuries that put me in bed for a week and on crutches for another three. My kid suffered abrasions on his arm, but thankfully was otherwise unharmed.

My injuries kept me off my bike for the rest of the season and so I started taking transit and driving to replace biking. Friends and acquaintances asked if I would ever return to two-wheeled transport. I told them I would absolutely be riding again, business-as-usual, come spring. (I generally store my bike from December to March, anyway.)

Unfortunately, it hasn’t quite worked out like that. Since the snow melted I’ve been slow to re-adopt cycling as my go-to transportation mode, and I suspect it’s mostly has to do with being gun-shy about riding with my kid in tow (literally, as he’s now moved from bike seat to bike trailer.)

So now, after biking happily in Halifax for nearly 15 years, three of those with the most precious of all cargo, I find myself re-assessing why I bike, and whether I can and will continue biking with my kid.

The first and most obvious stop on this reassessment, and also one of the main reasons people cite for not choosing to ride a bike in the city, is safety.

I had always felt relatively safe biking in Halifax, but since this accident with my child on board, I wanted to know exactly how much riskier biking actually is compared to other ways of getting around.

Trouble is, we don’t really have that information. The Halifax police track all sorts of details about collisions involving pedestrians, but not cyclists. The Nova Scotia government used to track stats on all motor vehicle collisions in the province, but stopped in 2006, and now simply count traffic-related deaths. 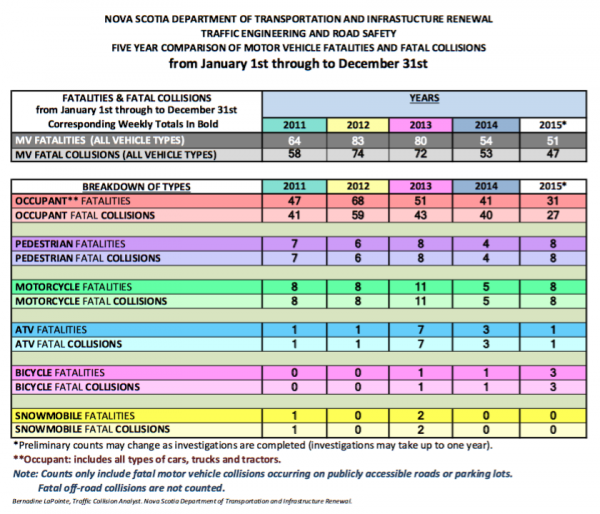 According to these stats, we know that in 2015, 31 people died in cars, 8 people on motorcycles, 8 people on foot, 3 people on bikes, and 1 person on an ATV. But those are just raw numbers, and give us little actual sense of the risk involved in these modes. To see risk, we need something to compare against, like how many trips people are taking in total, or how far they are going with each mode. We are working on getting that information now with the city-sponsored household travel survey, being administered by DalTRAC. (Fill it out if you haven’t already!)

Thankfully, others have the data needed to compare the risks. The Cycling in Cities research program at UBC compared British Columbia’s fatality rates among the modes with those found in a similar US study. They found that “the safest mode of daily travel, by far, is bus transit, and the riskiest, by far, is motorcycling. Driving, walking and cycling are intermediate between these.” 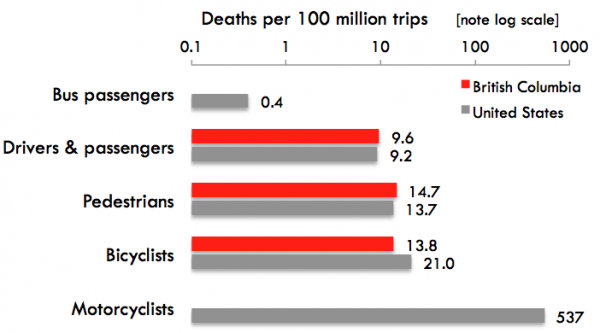 Comparing data on fatalities per million trips between modes in BC and the US.

It’s important to note that the UBC group decided to compare death rates with the number of trips taken, not how many kilometres were travelled by each mode. If you sub in kilometres travelled as the denominator, then the spread between walking, biking and driving expands significantly, with cars appearing safer than bikes, and bikes safer than walking. This is because we tend to drive longer distances and walk shorter distances. For my purposes, and those of most urban riders, the distance-based risk ratio is not really helpful, since the trips I’m considering using my bike for are all relatively short, usually under five kilometres.

So considering trips-based risk, the BC numbers make cycling look slightly less risky than walking, though driving is less risky than both active modes. Of course, that is BC, home to Vancouver, with its considerable investment in biking infrastructure and higher percentage of people on bikes. The US numbers, sourced from a 2006 study, might be a wiser comparison for Halifax, and show riding a bike as riskier than walking, and just over twice as risky as driving a car.

So yes, as you might have suspected, riding a bike is definitely riskier than driving, and in many places, riskier than walking. But is risk of injury the only factor to consider?

As it turns out, by biking or walking even short distances every day, I also reduce other health risks, like my chances of getting cardiovascular and other diseases. So there’s a trade-off: biking increases risk of injury in the short term, but decreases risk of disease in the long term.

On the general fitness front, studies also show that active transportation delivers big benefits versus driving. My last year of relatively sedentary transport is my own personal proof: I’ve gained weight and lost some of the stamina I need to keep up with a 4-year old. I’m just not as healthy or happy as I was when riding a bike was part of my daily routine.

So the reality is, if I continue to let last September’s accident spook me, I could be sacrificing my health in exchange for my safety, which is not a fair deal.

I have high hopes that I will be able to get my bike mojo back this fall, and then proceed to pass it along to my kid. Soon enough, he’ll be riding on the sidewalk beside me. And hopefully, by the time he’s hitting the streets with his own two wheels, we will have collectively made Halifax streets a little safer for everyone.