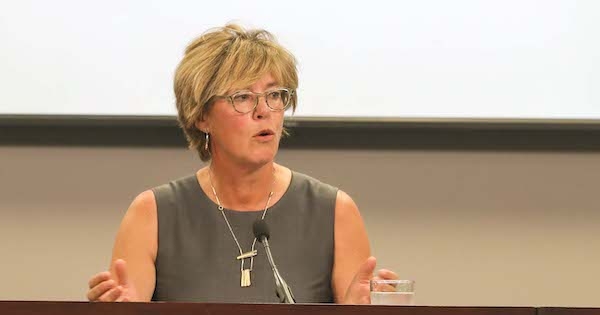 Premier Tim Houston today fired Dr. Brendan Carr, CEO of the Nova Scotia Health Authority (NSHA), and dissolved the board of directors of the Authority.

The move comes as Houston is seeking to “streamline” governance at NSHA. Instead of having what he deemed a cumbersome board, Houston is installing a four person “leadership team” on health issues, consisting of:

Karen Oldfield is the interim CEO of the Nova Scotia Health Authority. Oldfield was formerly CEO of the Port of Halifax, and had served in the Hamm government. Oldfield has no experience in health care.

Dr. Kevin Orrell is CEO of the newly created Office of Health Care Professionals Recruitment; he is the former deputy minister of Health and Wellness.

Janet Davidson is the administrator of the Nova Scotia Health Authority; she is the former chair of the NSHA board of directors and was interim CEO of the NSHA in 2019.

Houston said the team will be travelling around the province later this month to hear directly from health care workers. “We want to listen to them,” he said. “We want to work with them on solutions. So this leadership team understands their mandate and that that is a mandate to listen, to learn, and to take quick action on things that can be done to improve health care. They will be empowered to make decisions on things that will make an immediate difference. And I’m very excited for them to to see the results of their work.”

The shake-up at the NSHA comes at some cost.

But another cost comes with the removal of the NSHA board of directors, which included both a Black and an Indigenous member. Now, the entire governing structure at NSHA is white. Asked about this, and about the appointment of Pat Dunn, a white man, as Minister of African Nova Scotia Affairs, Houston said:

In terms of the appointment of a minister, there’s a certain reality. Nova Scotia has elected a caucus of PC members. We had a very diverse slate of candidates, excellent, excellent community leaders. They didn’t happen to get elected this time. So I formed my cabinet from the caucus that Nova Scotia sent to me. Not that I sent — that Nova Scotians sent to the legislature. And I respect the wishes of Nova Scotians.