Members of the legislature’s Law Amendments Committee have voted in favour of wholesale changes to Bill 4, the Biodiversity Act, after meeting for more than 11 hours and hearing from more than 45 citizens yesterday. Just prior to the hearing, which began at 9am and gave each participant 10 minutes to speak, the government released the text of the changes to the Act. 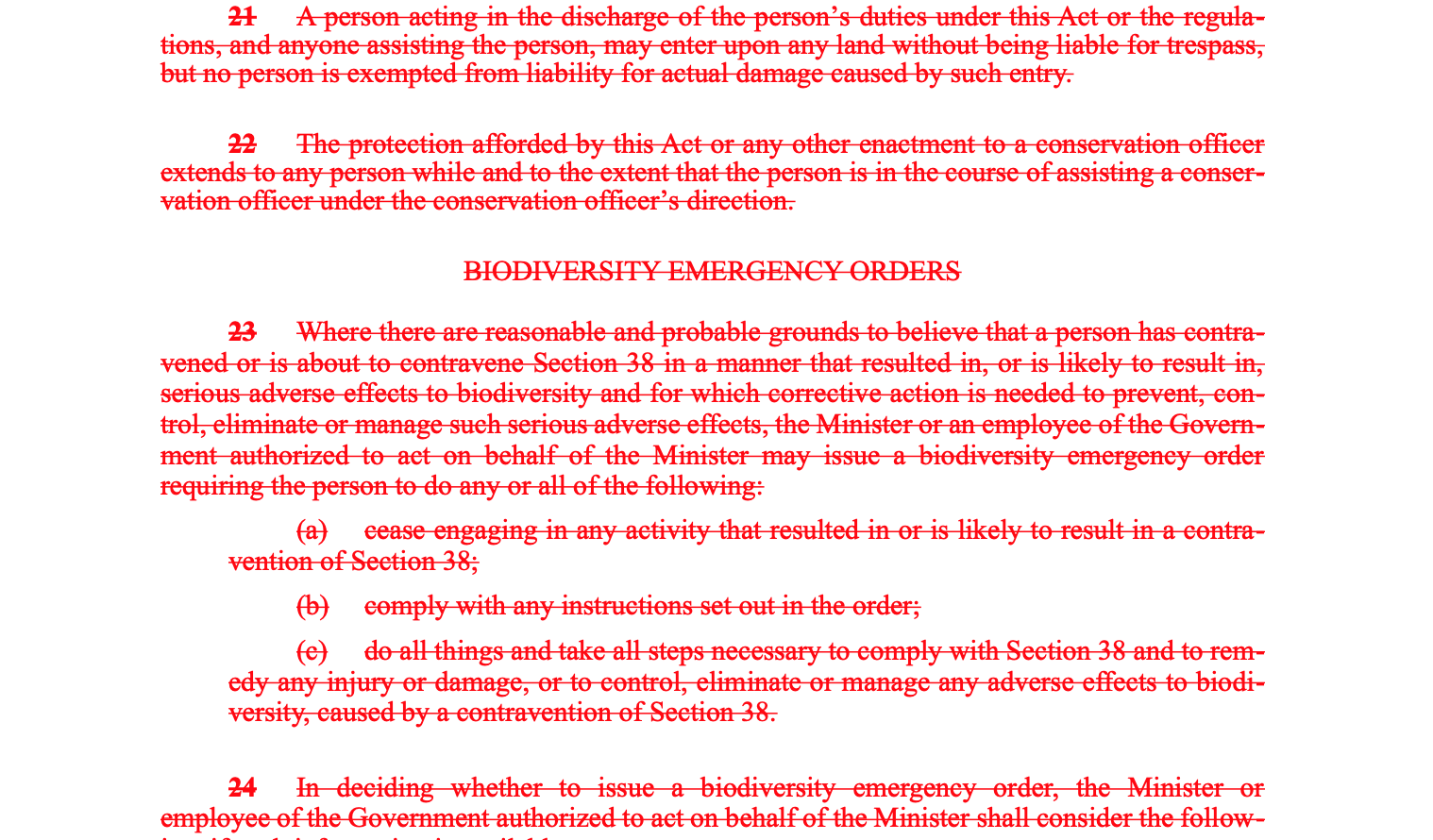 Entire sections of the Biodiversity Act were crossed out.

“It’s a sea of red ink,” said a disappointed Lief Helmer, chair of the Mersey Tobeatic Research Institute, a non-profit group with an educational focus that works with private landowners and environmental associations in North Queens and Annapolis counties. “The Act has gone from 50-60 sections down to 18. Many improvements have been removed in response to a divisive campaign. It’s really much diminished.”

The “divisive campaign” Helmer was referring to was the “Kill Bill 4” paid advertising campaign mounted by Forest Nova Scotia under the guise of an imaginary group called Concerned Private Landowners. Helmer believes a lot of the mistrust voiced about the legislation could have been avoided if only the Liberal government had included regulations to accompany the Act.

“Without the presentation of the regulations, it was vulnerable to the scare campaign that happened,” said Helmer.

Gutted from the Biodoversity Act were as many as 10 pages that would have allowed the government to create and enforce “biodiversity management zones” on private as well as Crown lands to protect the habitat of endangered species. Considering private landowners control 70% of the province’s landmass, Helmer compared the gutting of Bill 4 to “the equivalent of testing for COVID-19 in one-third of our counties.” 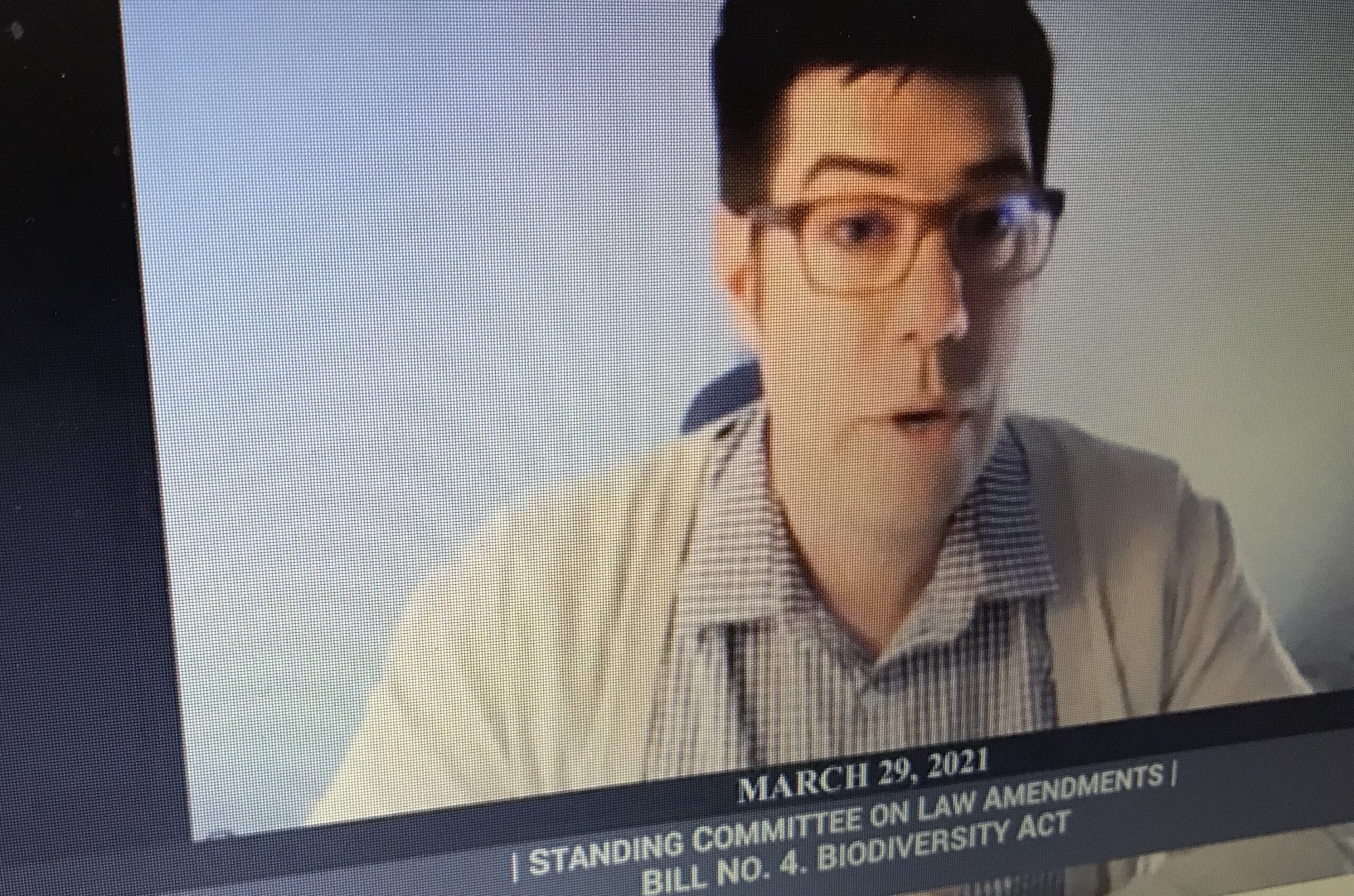 And if that analogy seems overly dramatic, consider what the Law Amendments Committee heard from Dr. Karen Beazley, a professor at the Dalhousie School for Resource and Environmental Studies.

“Without a healthy, biologically diverse system, there will be no economy, no health system, no mining, no forests… Biodiversity collapse and climate change are twin crises,” said Beazley. “Bill 4 is a crucial first step in addressing serious declines in biological diversity in Nova Scotia. It is needed to maintain and restore our ecological life-support system. We also consider it is important to retain the Biodiversity Emergency Orders which will grant the province the right to intervene on private land in emergency situations where the Act is being contravened. We also think it is important to retain the offences and fines…”

The motion passed by the Law Amendments Committee (dominated by Liberals) no longer allows the government to issue Emergency orders on private land unless the landowner consents.

Gone also are the conservation officers who under the previous version of the bill would have enforced the orders and the stiff fines of up to $500,000 for landowners and $1,000,000 for corporations that did not comply with the emergency orders.

(Those fines are in line with ones under the province’s Endangered Species Act, as noted in a presentation from Lisa Mitchell with the East Coast Environmental Law Association, and have never been enforced).

Elizabeth Glenn-Coupland, who recently moved to Nova Scotia and bought land at Spencer’s Island in Cumberland County, noted other provinces have successfully passed laws that control what private landowners are allowed to do near watercourses (Quebec) and near sand dunes (Prince Edward Island).

The committee heard from several landowners who said they feared Bill 4 would give government too much control over what might happen on their farm or woodlot.

“I consider myself a good steward of the land. I believe private lands are being well managed by farmers and foresters who place high value on their land and are usually wiling to share it with hikers and snowmobilers,” said Gerald Fulton. Fulton has been a farmer for 45 years and owns about 400 acres that includes a woodlot outside the town of Berwick. “My position is I support the government’s efforts to implement the Biodiversity Act on the land they own. But not on the private lands and stuff it down our throats.”

Like many others who called in, Fulton questioned the need for a Biodiversity Act on Crown land the government already controls. He said that made him “suspicious” of a hidden agenda and felt the government should have held public meetings and distributed information to private landowners who stood to be impacted by the proposed legislation.

“We cannot put in place actions or large fines without consulting people first,” said Murray Scott, the mayor of the municipality of Cumberland and a former Progressive Conservative MLA. “The intent of the legislation is still not clear to me.”

Scott suggested delaying passage of the bill for six months to give the government more time to consult. That seems unlikely since this is the second time the legislation has been proposed. The bill was first introduced by then-Lands & Forestry Minister Iain Rankin in 2019, but now-Premier Rankin was quick to withdraw the most contentious sections last week when MLAs began to hear from hundreds of private landowners after Forest Nova Scotia took out full page ads in the provincial newspaper. The Biodiversity Act, as amended yesterday, is now a shadow of its former self.

“Nova Scotia landowners stood up and spoke out,” declared Bishop yesterday. “This is what the democratic process looks like.”

“Really what we need is a government that is trustworthy and that means not at the behest of industrial forestry,” said Nina Newington, a rural landowner and leader with Extinction Rebellion in Annapolis County. “We need a Biodiversity Act with teeth. I understand we need to balance jobs, the economy, and the ecosystem but as Lahey put it, ecosystem health has to trump all of that or else we are dead meat.”