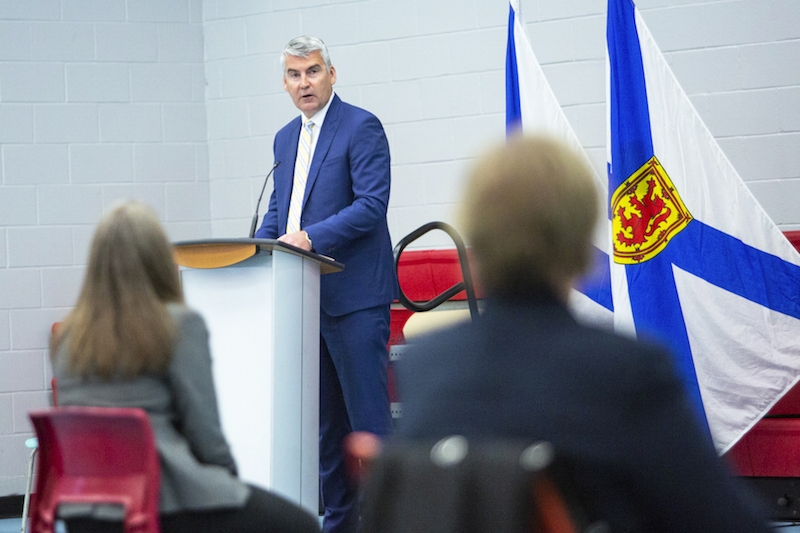 It was one of those moments when seemingly good intentions smacked up against abysmal execution and resulted in a lost opportunity.

Last week on his way out the power door, Premier Stephen McNeil not only offered a fulsome wea culpa apology to the province’s Black and Indigenous communities for our long and ongoing history of systemic racism in the justice system but he also established what he called “a design team… to set a course for fundamental change in public safety, including the role and approach to policing and law enforcement.”

The premier’s announcement in front a select — COVID and otherwise chosen — audience at a news conference last Tuesday illustrated the best and worst of our premier.

Although I’ve never been a fan of his approach to governing, I have no doubt McNeil’s apology was sincere and heartfelt — and right.

Our system of justice has failed members of our Black and Indigenous communities. This system is supposed to keep all Nova Scotians safe, but because of the colour of your skin, many of you live in fear. Today, I say: Enough, I see you, I hear you, I believe you and I am sorry. On behalf of my ministers, my caucus, our government, we are sorry racist institutions have failed you, your families and your ancestors. I can’t take away your pain or bring back the opportunities and lives lost. But I am showing up today to try to work with all of you to find a new approach to public safety.

For reasons I’m not sure I understand, Stephen McNeil has seemed genuinely animated by issues of racial injustice.

During the 2013 election campaign that brought him to power, for example, McNeil committed himself to appoint a public inquiry into decades of abuse at the Nova Scotia Home for Colored Children.

Within the year, in a packed pre-COVID Red Chamber at Province House, McNeil followed up by offering another full and complete public apology, both to the survivors of the abuse and also, significantly, to the Black community.

It is one of the great tragedies in our province’s history that your cries for help were greeted with silence for so long. Some of you faced horrific abuse that no child should ever experience. You deserved a better standard of care. For the trauma and neglect you endured, and their lingering effects on you and your loved ones, we are truly sorry….

To the African Nova Scotian community: we are sorry. The struggle of the Home is only one chapter in a history of systemic racism and inequality that has scarred our province for generations.

Pledging that the apology was not “the closing of the books,” McNeil’s government followed up by establishing an unconventional but much-praised “restorative” public inquiry process “rooted in the overarching commitment to a different way of doing things — to fundamental shifts in ways of thinking and working at systemic and structural levels.”

Stephen McNeil’s response to the Home for Colored Children issue became one of his signature accomplishments as premier.

Another, of course, was his decision last December to order Northern Pulp to stop polluting the waters near the Pictou Landing First Nation by spewing its effluent into Boat Harbour. Although decades of politicians past had promised to clean up this racially-rooted environmental disaster, no politician before him had been prepared to risk the jobs the company brought to the community to make those promises reality.

McNeil did. It was “one of the hardest decisions that we as a government have had to make,” he allowed at the time, but he did it. Because it was right.

“It really meant a lot that he kept his word,” Pictou Landing First Nation Chief Andrea Paul said later. “I’ll forever be grateful to him.”

And yet… there is always that other, authoritarian, father-knows-best Stephen McNeil lurking in the background working to undermine even his best intentions.

That seems to have happened with McNeil’s apology/appointment last week, which came in the wake of the current global public reckoning over racism.

Stephen McNeil decided an apology was needed. He made it. He decided, correctly, that an apology was not enough, so he — on his own once again — decided to appoint a design team made up of worthy people he chose from the Black and Indigenous communities, government, academia and policing to “determine what is required to support the fundamental changes needed across systems and structures to secure safety and justice for all Nova Scotians.”

There were — and are — all sorts of problems with that top-down approach.

Within hours, for example, one of those listed as being a member of the design team tweeted he wasn’t.

“I cannot support this initiative without discussing the terms of reference for the design committee, structure of that committee and how the broader community organizations focused on community well-being for our Black and Indigenous communities will be included,” explained HRM councillor Lindell Smith. It appeared Smith had simply attended a private meeting about the idea of the design committee and his name had been added to its list of members.

There were equally telling absences from the committee’s make-up.

Quentrel Provo, a well-known and respected Halifax anti-violence advocate, told the CBC that, as a Black man who has sat in on court cases, “you can see the systemic issues with the justice system that has affected so many lives.” But he wasn’t among those listed as a member of the design committee.

Activists in North Preston, Nova Scotia’s largest Black community, said they weren’t even consulted and insisted their views “must be considered in any future plans for the region and province.”

El Jones, another prominent member of the Black activist community with a particular interest in the judicial and prison systems — who also wasn’t listed as a member — asked reasonably enough why the process itself wasn’t being created and led by African Nova Scotians and Indigenous people.

“Should this happen? Do you want this? Is this a solution?” Jones asked. “These were questions that were not brought to the broader community. A lot of the community’s anger or confusion is just around this.”

As is his wont, Stephen McNeil dismissed those complaints, bulldozed past questions about the process and insisted his design team was already on the job. “The community has been engaged and it will continue to be engaged and it will be the broader community,” he told journalists last week. “It will be all those you’ve heard from and people that we haven’t heard from yet, whose voices will be part of this conversation.”

It is a shame the premier can never seem to get out of the way of his own good intentions.

It will be a shame if his important and necessary apology gets lost in the controversy he created.