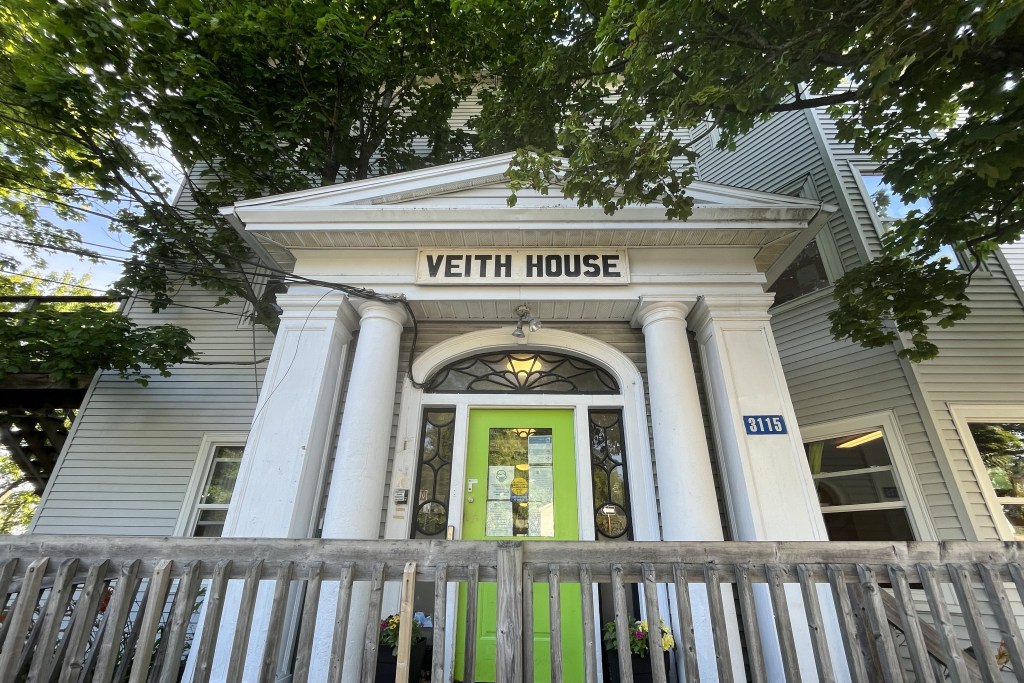 Five former residents of the Halifax Protestant Orphans’ Home are suing the provincial government and the organization that once ran the home, alleging “an atmosphere of tolerance of physical, sexual and emotional assault,” and “dehumanizing, degrading” treatment of children in care in the 1950s and 60s.

The home was established in the mid-1800s to house children whose parents were dead or otherwise unable to care for them, starting in a building on North Park Street.

It later moved to the North End, and after the Halifax Explosion, operated in the building now known as Veith House until the orphanage closed in 1970. 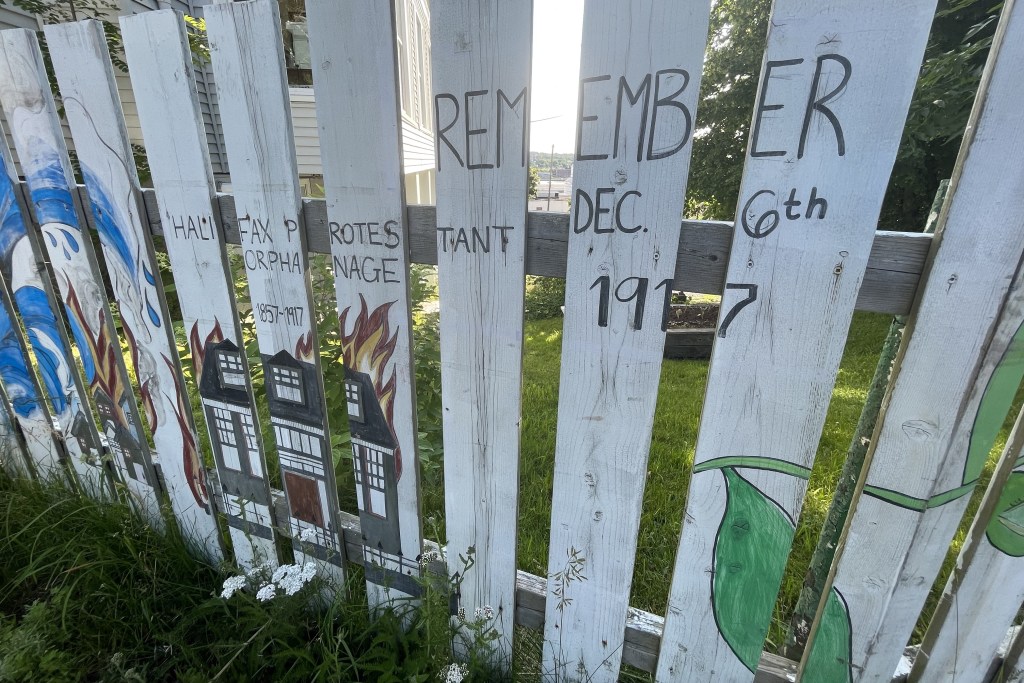 The fence outside Veith House commemorates the former Halifax Protestant Orphans’ Home building that was destroyed in the Halifax Explosion. — Photo: Zane Woodford

Author and former Chronicle Herald journalist Lois Legge documented the stories of several former residents of the home in her 2019 book, Wounded Hearts: Memories of the Halifax Protestant Orphans’ Home. Those residents told her stories about being tied to their beds, repeatedly beaten, and more.

None of the five former residents now suing was featured in Legge’s book, but their stories are remarkably similar. The Halifax Examiner spoke with three of them.

‘Adults are supposed to take care of little kids’

Donna Morse lived in the home in the late 1950s and early 1960s. She now lives in Manitoba, and recently retired from her job of 35 years.

After the bodies of hundreds of Indigenous children were found at the sites of former residential schools last year, Morse and her sister, who was also a resident of the home, had suppressed memories come streaming back.

“And the two of us had a little breakdown together on the phone,” Morse said. “It just brought back stuff that we had hoped we hadn’t remembered.”

Morse shared one good memory from her time in the home: men walking up the hill from the shipyard would sometimes hand the kids candy through the fence on their way home from work. 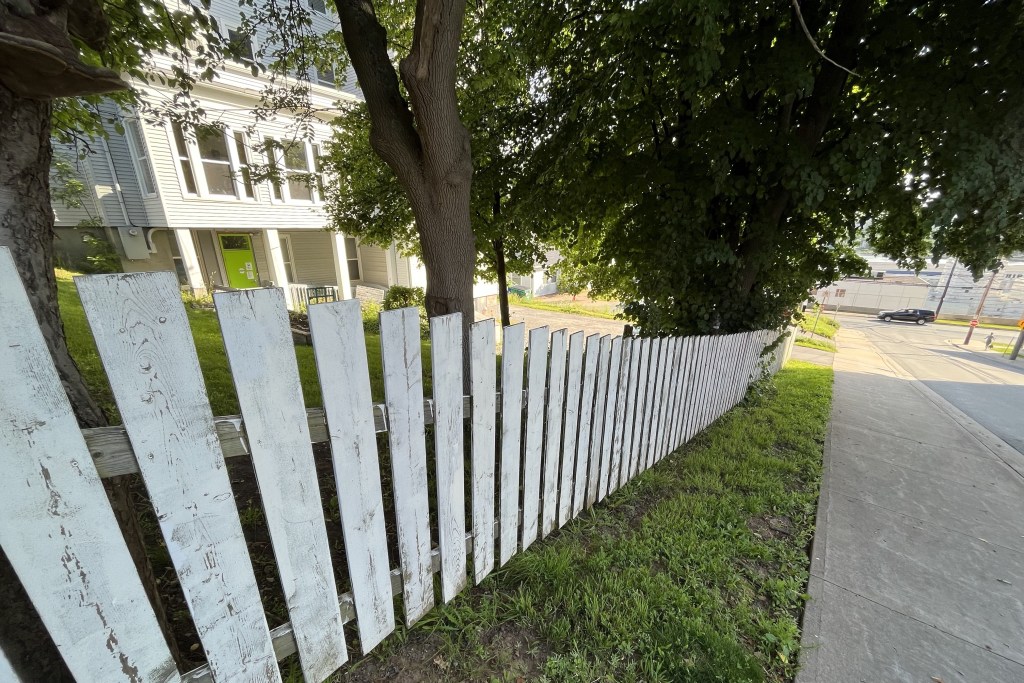 The fence next to Veith House, leading down to Barrington Street and the Halifax Shipyard. — Photo: Zane Woodford

“So that’s a good thing. I think that’s the only good thing,” she said.

“They used to tie us to the bed, wouldn’t let us go to the bathroom. We’d pee our bed of course, and then they’d beat us in the morning because we had wet the bed. They would lock me in a closet, cellars, anything that was dark. I don’t like the dark to this day. Shave our heads. I always hated that. They would shave our heads for punishment.”

Men and women meant to oversee the home would come in sometimes, “but they weren’t any better.”

“That was the one time that we had to wear dresses,” Morse said.

“And each one of us would have to stand by somebody and they would get touchy feely and if we did anything about it, like pushed the person away, we were punished for it later … The men were worse but the women weren’t much better.”

Morse is pursuing legal action hoping to make sure this never happens again.

“What I want is life to be different for children that are in our position, the position we were in. Adults are supposed to take care of little kids,” she said.

“I just want things to be different than they were for us. And I want people to know this is what they did to us, this is where they put us. We’ve had to live with this forever, and most of our life, nobody listened to anything we had to say … I want the powers that be to hear and see what kids actually went through.”

And she believes the government should apologize.

“I would like an apology. I’m pretty sure my two sisters would too and all the rest of them that had to deal with this stuff.”

Tim Day lived in the home around 1965 after his parents separated. He left Halifax for years, originally moving to Ontario with a foster family. But he returned in 2013 to spend time with his grandchildren.

Day said he feels what happened at the home has been buried, and he was affected by revelations about other institutions, like the Nova Scotia Home for Colored Children. It’s time to dig into what happened at the Halifax Protestant Orphans’ Home, he said, and he too believes he’s owed an apology.

“I’m hoping that they have a look at it. And they they see that that these children, we weren’t cared for properly,” Day said.

Day said he was physically abused at the home.

To add insult, he said those weapons were actually meant to be toys for the children.

“The batons were, as well as the paddles, those were donations. Those were toys that were donated for the children and taken out of storage and used to punish them instead. Like, the batons were for the girls for majorettes. They never got those. The paddles were [for] paddle ball. Never got those, got to feel that stuff,” he said.

“There was no compassion for our emotional state, nor was there anyone there to discuss it.”

Another woman, who didn’t want to be named, was a resident of the home from about 1957 to 1965. She’s since raised two kids on her own: “I was never going to let my kids go through what I went through. I made sure I was there for my kids.”

Her time in the home had a lasting effect.

“It’s been a struggle, that’s for darn sure, all my life,” she said. “It’s caused nightmares. I’ve never had a good relationship with anybody. I’ve learned not to trust anybody.”

“I think these people should be accountable for what they put us through … The mental abuse, the physical abuse, the sexual abuse.”

Lawyer Liam O’Reilly filed five separate but similar statements of claim on behalf of his clients last month, naming the Attorney General of Nova Scotia and the Halifax Children’s Foundation as defendants.

The foundation is a charity incorporated in 1971 after the home closed in 1970. It still owns Veith House, now a safe space for neighbourhood kids to drop in, with a memorial to the building’s past. The property is assessed at a taxable value of $2.9 million — much less than its true market value. The foundation “is liable for the omissions, acts, and liabilities” of the Halifax Protestant Orphans’ Home, O’Reilly submits. 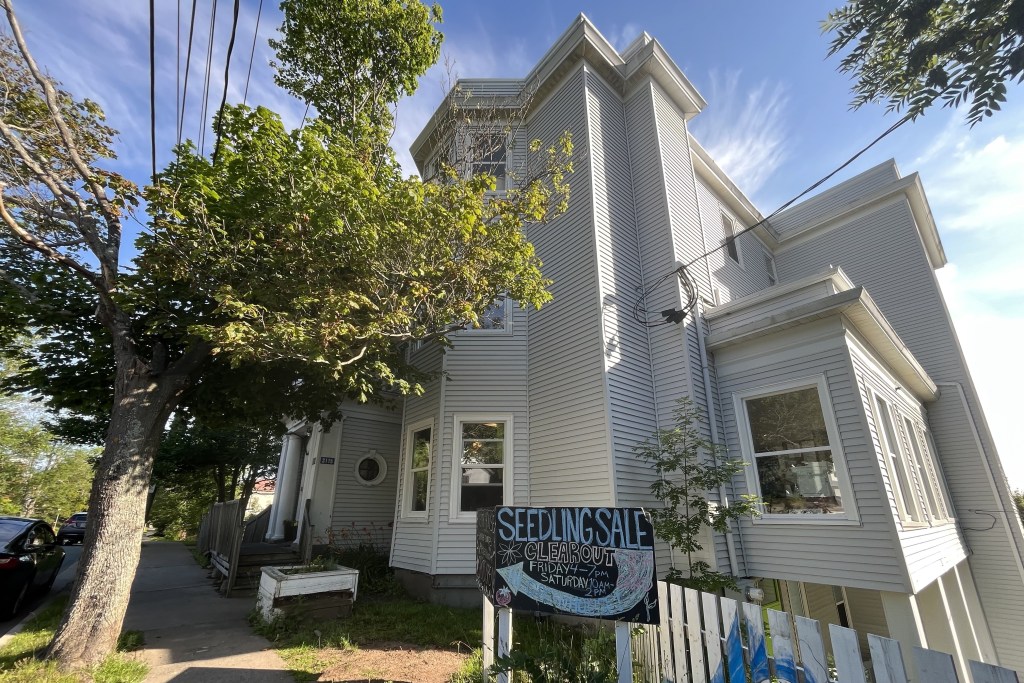 For Legge’s book, the author scoured the Nova Scotia Archives for records about the home, and found the provincial government at times provided a significant portion of the home’s funding (for instance, $12,187 of the 1958 budget of $28,262.) But it took a hands-off approach to regulation. In her final chapter, Legge wrote:

Several reviews of the Protestant Orphans’ Home in the 1960s confirm the Province’s role and the facility’s apparent autonomy, even in its final years of operation.

“Contact with other agencies seems to have been largely limited to accepting wards for care from Children’s Aid Society and the Department of Public Welfare,” says a 1966 report from an agency review panel, set up by the then-Halifax- Dartmouth Welfare Council.

“The governing body has been structurally and financially independent of other welfare institutions in the community until very recent years,” it adds, noting the orphanage’s administrative structure—the all-male board of directors and the Ladies’ Committee—appears to be “unique in the Halifax area at this time.”

The review found that the orphanage didn’t provide any professional services for children or parents; that children slept in “large impersonal dormitories;” and that the playroom was “enormous but appeared bare except for a television placed high on a wall.” It suggested that the institution was unable “to provide sufficient attention to meet the emotional needs of each child.”

Former resident Linda Gray-LeBlanc, who lived in the orphanage during the 1950s, says most of those matrons certainly weren’t qualified to meet the emotional needs of children. “They just hired [people] right off the street,” she says.

But the Province continued to place few limits on the orphanage’s operations despite these deficiencies and despite its financial support—at least, no documents indicate otherwise.

And that had been the case from the beginning.

In the statements of claim, O’Reilly wrote:

The care provided to the residents and the conditions of the Home were poor. The staff hired by the Home were unskilled and/or unsuitable for dealing with children and the supervision levels at the Home were not suitable or appropriate for a residential facility for children.

The orphan residents of the Home, including the Plaintiff, were subjected to physical and emotional abuse, and intentional infliction of mental suffering from the Home and Province while in their care or supervision.

The orphan residents of the Home, including the Plaintiff, received an inadequate and improper education from the Home and Province while in care or supervision.

The orphan residents of the Home, including the Plaintiff, received an inadequate and improper healthcare from Home and Province while in care or supervision.

Specifically, O’Reilly wrote that the home threatened the plaintiffs “with severe punishments, including physical violence;” “chose to create and foster an atmosphere of fear and intimidation;” subjected the residents “to an atmosphere of tolerance of physical, sexual and emotional assaults and treated the Plaintiff in a dehumanizing, degrading manner;” and more.

The home’s action “constitutes systemic negligence, by not having in place management and operations procedures that would reasonably have prevented the abuse in a timely fashion,” O’Reilly wrote.

None of the allegations contained in the statements of claim has been proven in court, and neither the foundation or the provincial government has filed a defence. Given the intensive historical research involved, O’Reilly expects the case to take time.

O’Reilly encourages other former residents of the home to come forward, and he can be reached at Wagners law firm.