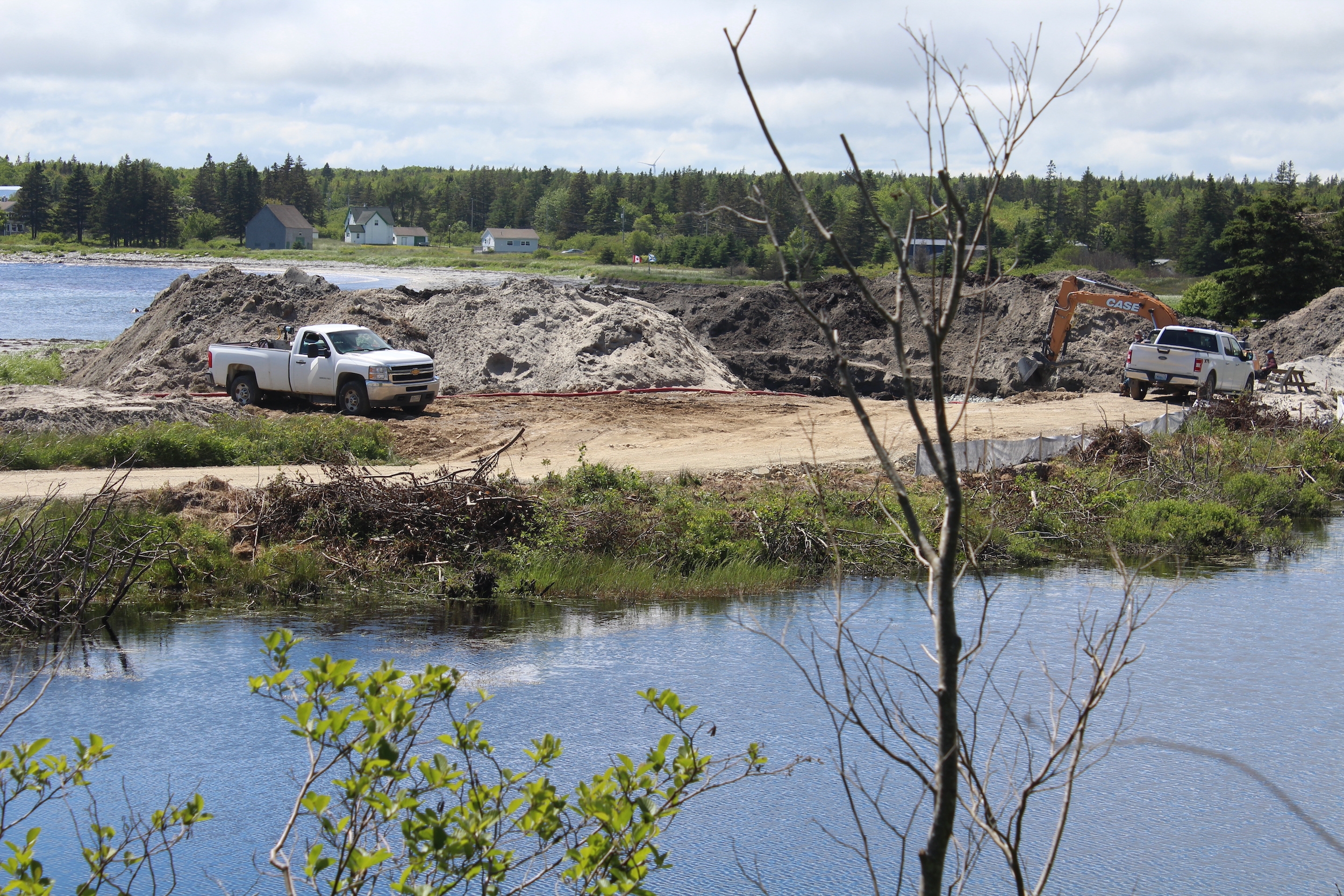 “The devastation is extreme,” said Cathie Mourre in a press release. “The sea grass is gone. The sand is being moved about and trucked away. The ponds are being infilled. The wildlife is being displaced. And the beach is forever changed.”

Long-time area resident Brian Mourre accompanied me on a tour around the property Wednesday. 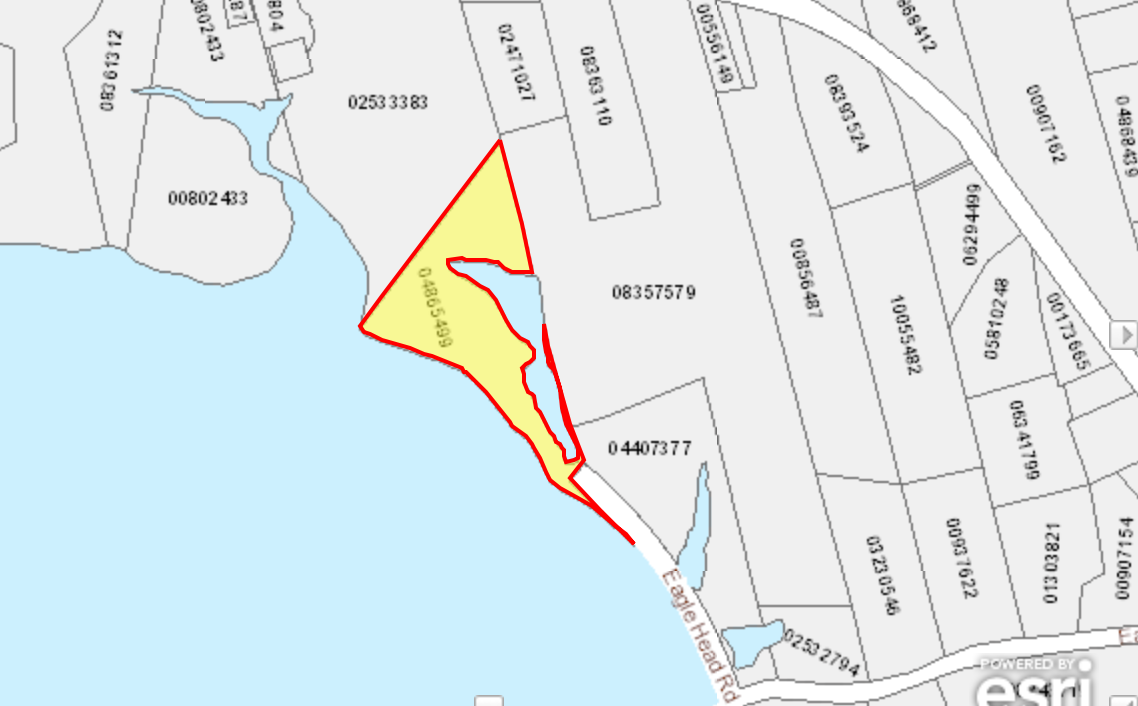 Kelly and P.E.I. resident Diana Girouard purchased the property last year for $175,000. It is assessed at $22,000. The property is a 4.7-acre triangular parcel; about a third of the parcel is a large pond that Mourre says is visited by beaver who have built a nearby den and by migrating seabirds. The house is being constructed on the portion of the property wedged between the pond and Eagle Head Beach, which is publicly owned. Kelly has installed “no trespassing” signs along the beach. Mourre said the beach is a popular swimming site for residents. 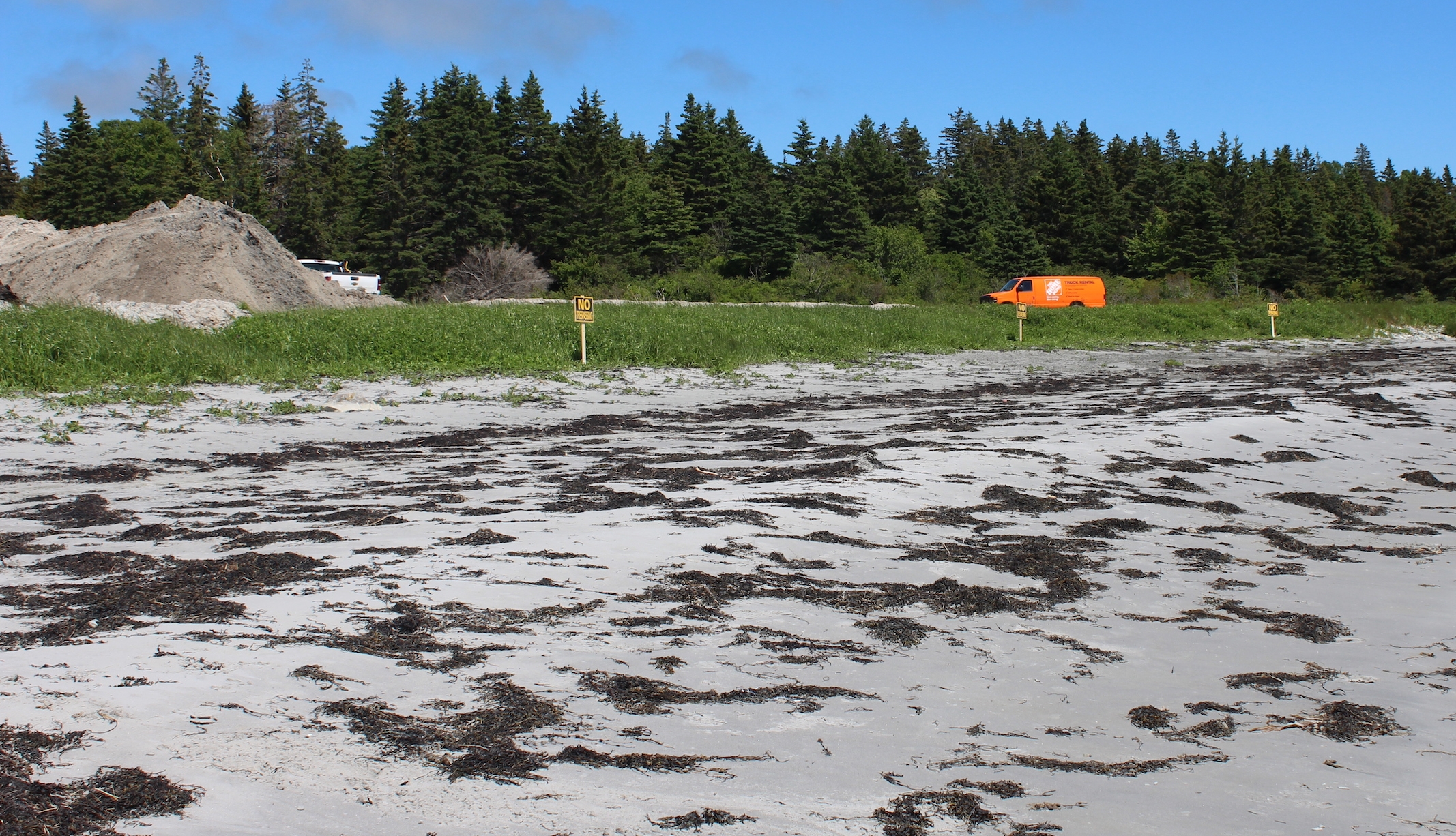 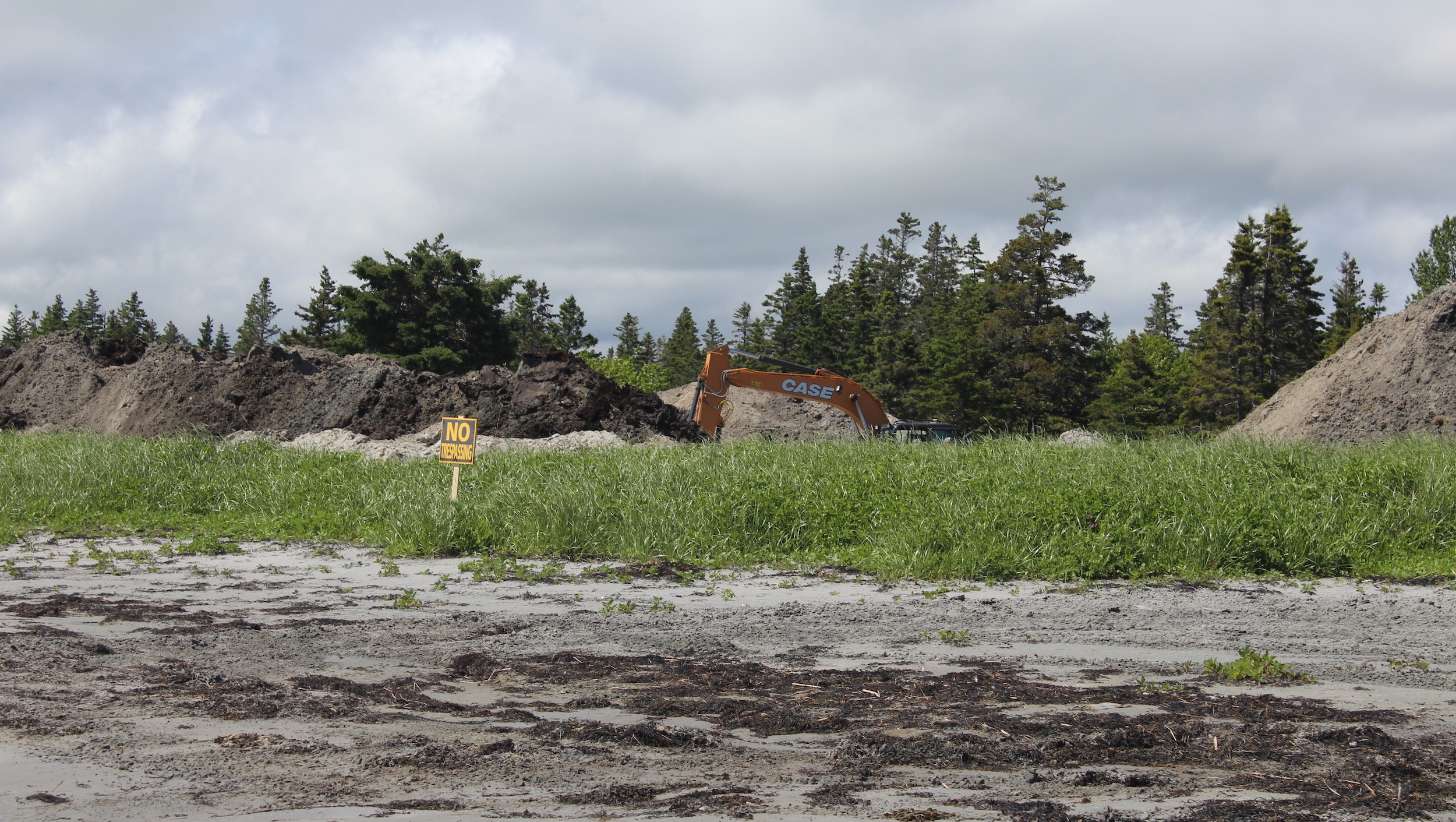 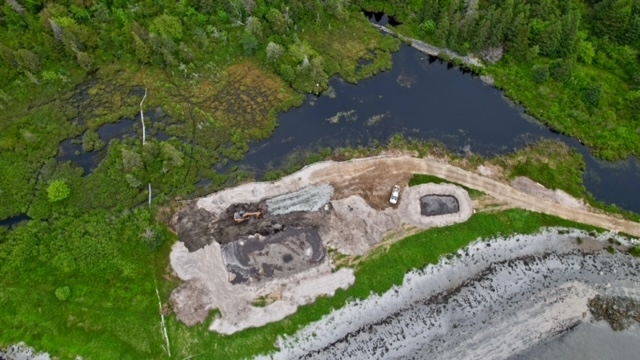 As I could observe from a nearby hilltop, and as seen from drone photos nearby residents provided to me, the construction so far consists of one large excavation pit, which is presumably being prepared for the foundation of the house. A hose runs from that pit to a smaller pit nearby, which is presumably a temporary holding pond for water pumped out of the large pit. While I was nearby for about an hour Wednesday, two large dump trucks delivered stone to the large pit.

Moure said he has inquired about permits, and was told that a building permit for a large foundational wall is pending.

When the property was listed for sale last year, the realtor wrote that “septic approval available,” but it’s difficult to see how a septic system could be constructed in an environmentally satisfactory manner on the wetland-constrained property. 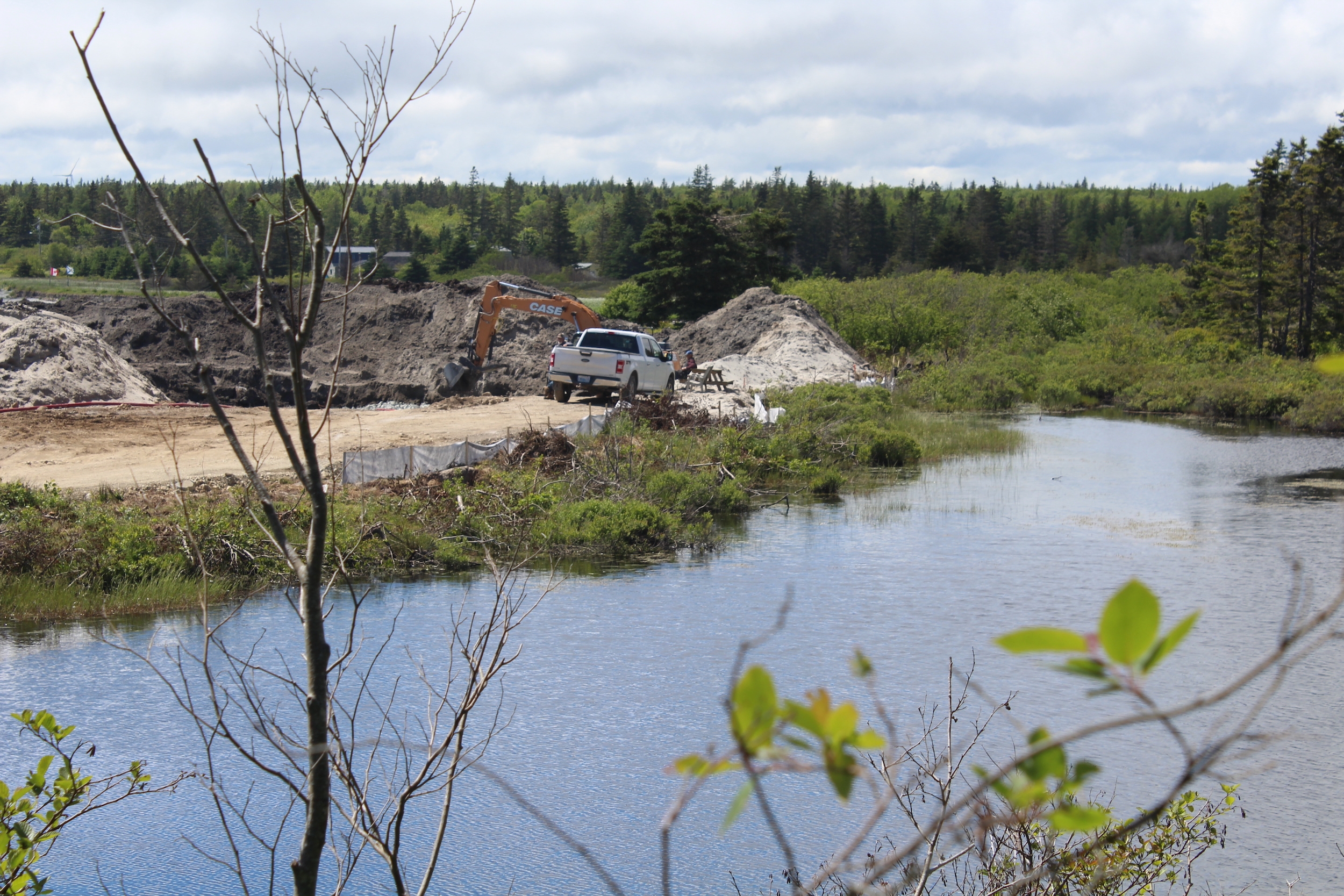 A silt fence was erected along the pond. Photo: Tim Bousquet / Halifax Examiner

Mourre told me that when the excavation at the site began, dirt and mud were flowing directly into the pond. Only after he complained was a silt fence erected alongside the pond.

But it’s evident that brush and dirt have been pushed into the pond at points. And the grasses that once bordered the pond have been crushed beneath construction vehicles. 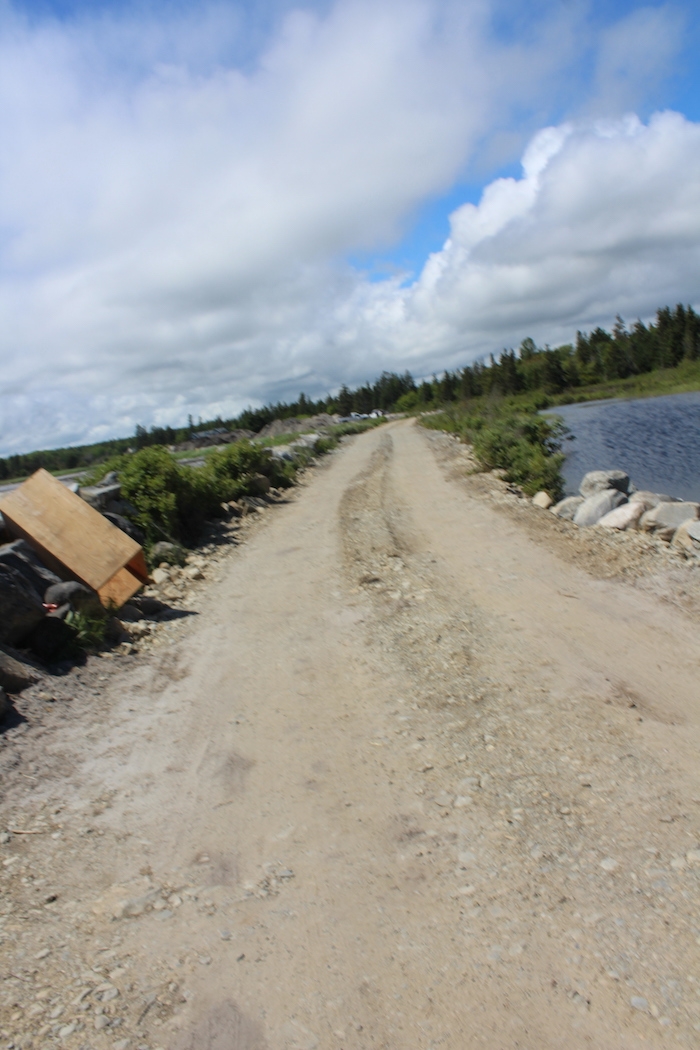 The extension of Eagle Head Beach Road onto Kelly’s property. Note the wooden box, which appears to be a form built for a concrete base to be installed as a future gate. Photo: Tim Bousquet / Halifax Examiner

The property is accessed via Eagle Head Beach Road, a public gravel road that runs about 50 metres from Eagle Head Wharf Road to Kelly’s property. The status of the road beyond that point is contested by area residents, but Mourre told me that before Kelly bought the property, what is now an extension of Eagle Head Beach Road was simply a narrow foot path. 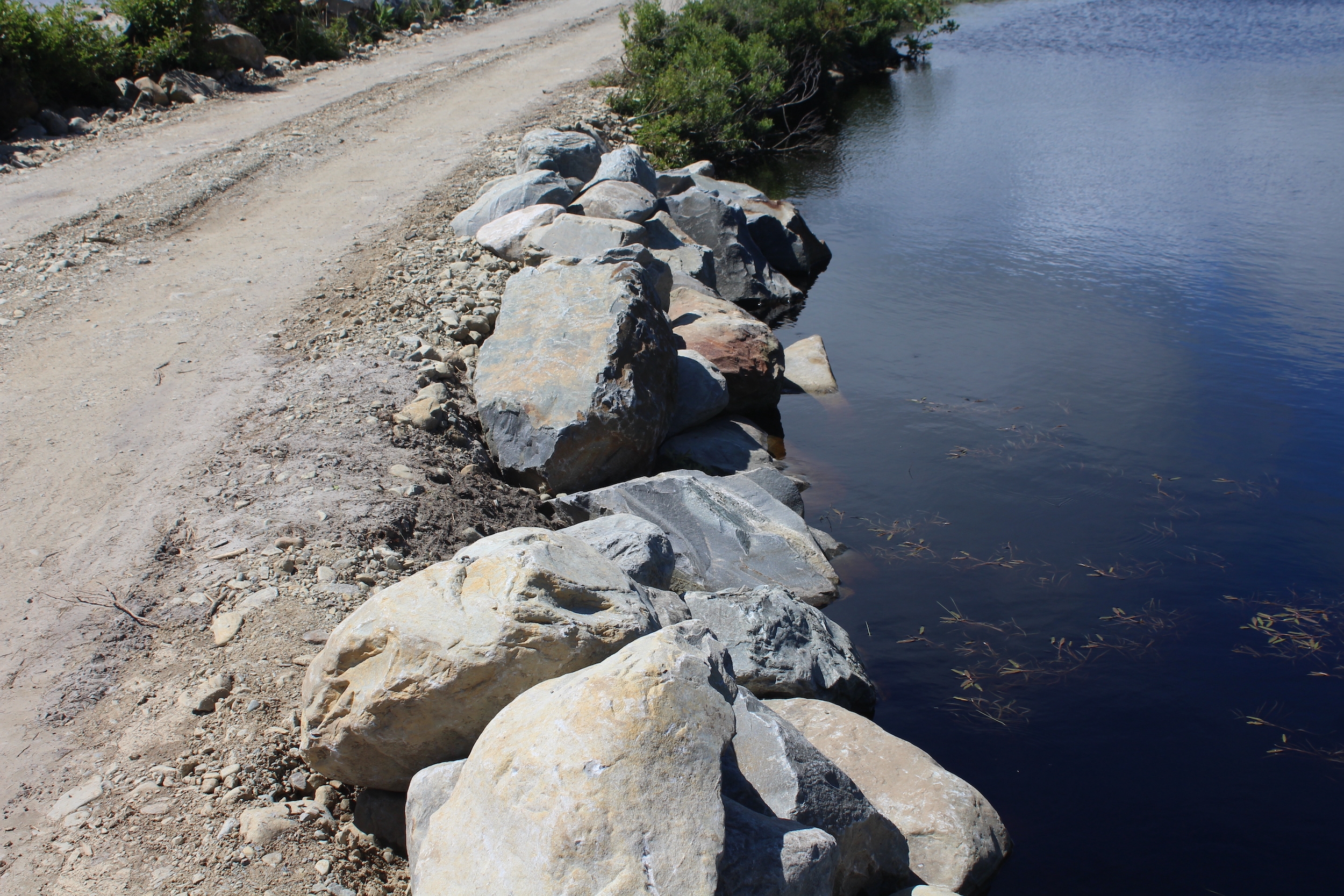 In order to construct a road that could handle construction vehicles, part of the pond was filled in. Photo: Tim Bousquet / Halifax Examiner 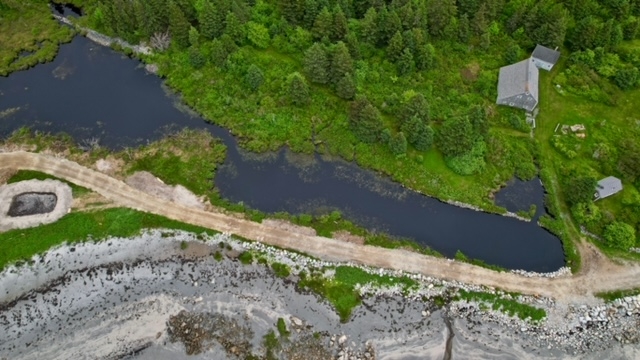 A drone photo of the extension of Eagle Head Beach Road onto Kelly’s property shows (at far right) that the pond was partially filled to construct the road. Photo contributed

In order to bring construction vehicles to the site, the path was widened. This entailed dumping fill into the pond, which I could readily see on my visit.

Area resident Peter Leslie told me that in the 19th century there was an ox cart road through what is now Kelly’s property, but the road was washed out in a storm around 1905. Eagle Head Beach Road was later reconstructed, and it is now protected from storm surges by riprap. 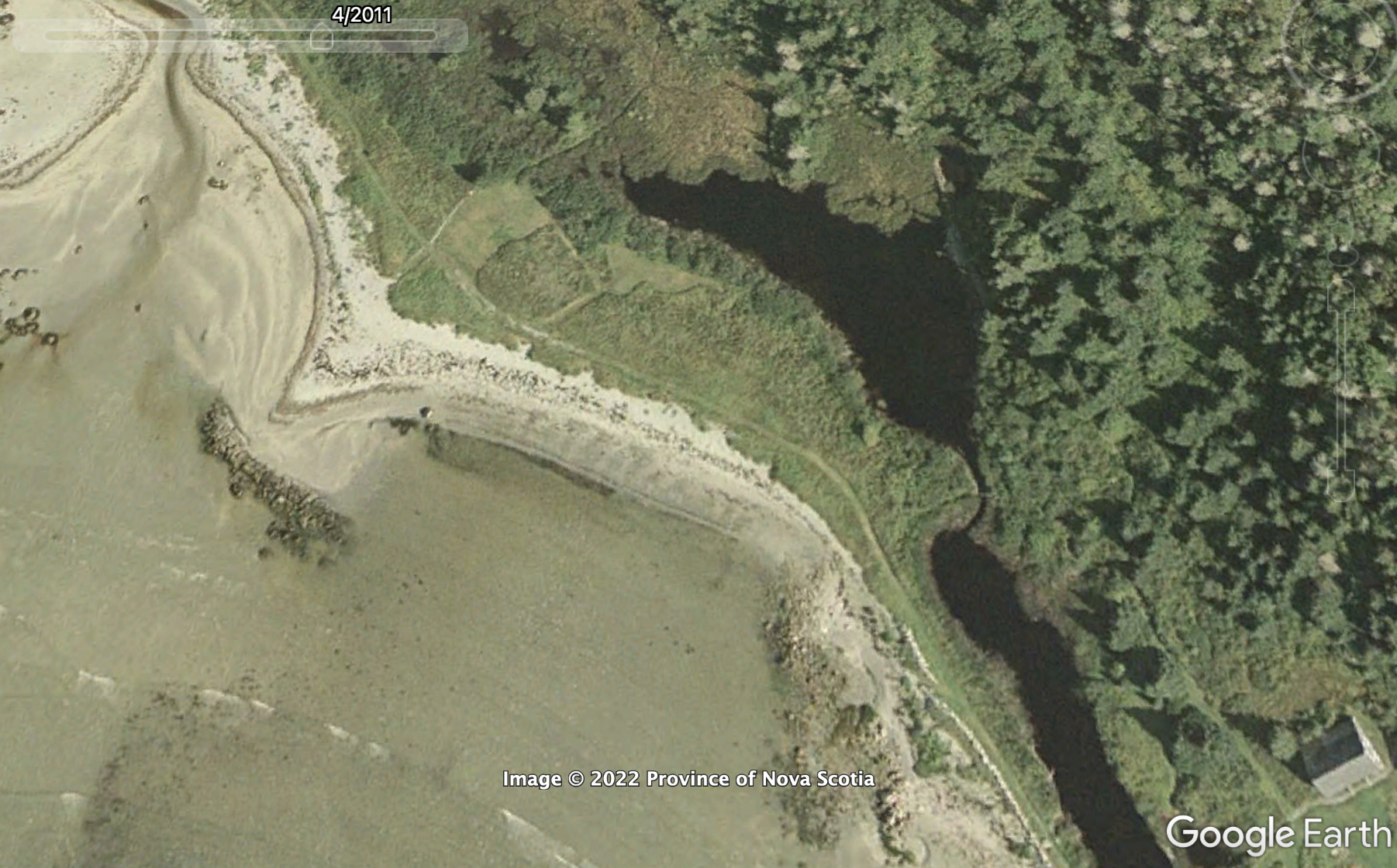 An aerial photo of the property from 2011. Photo: Province of Nova Scotia / Google Earth 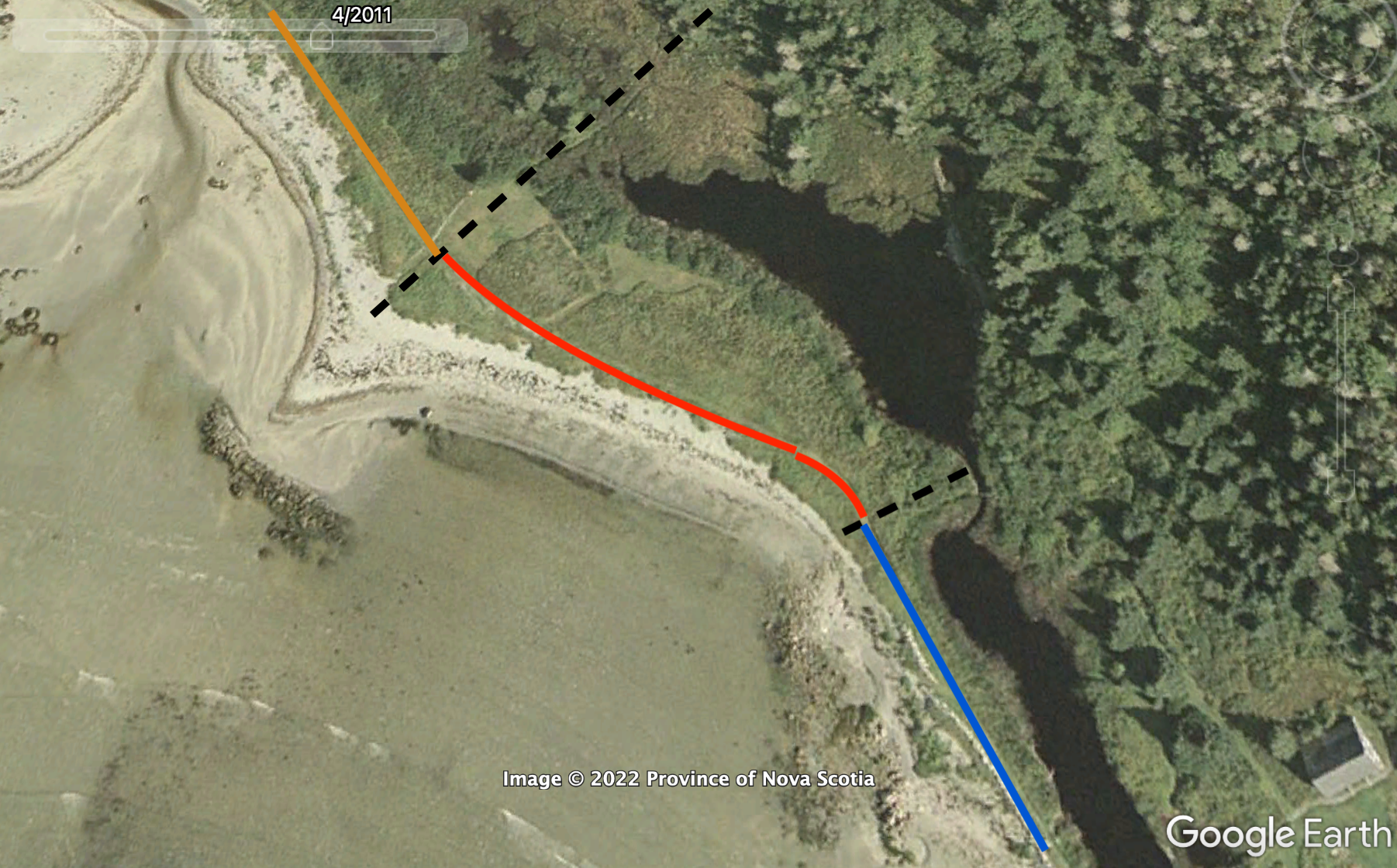 From the end of the public road, said both Leslie and Mourre, there was a footpath along what used to be the old ox cart road. An aerial photo from 2011 supports that claim.

The path continues on to the west, on the opposite side of Kelly’s property, extending to a footbridge that crosses a small brook, and then connecting to what Mourre called Schoolhouse Road. 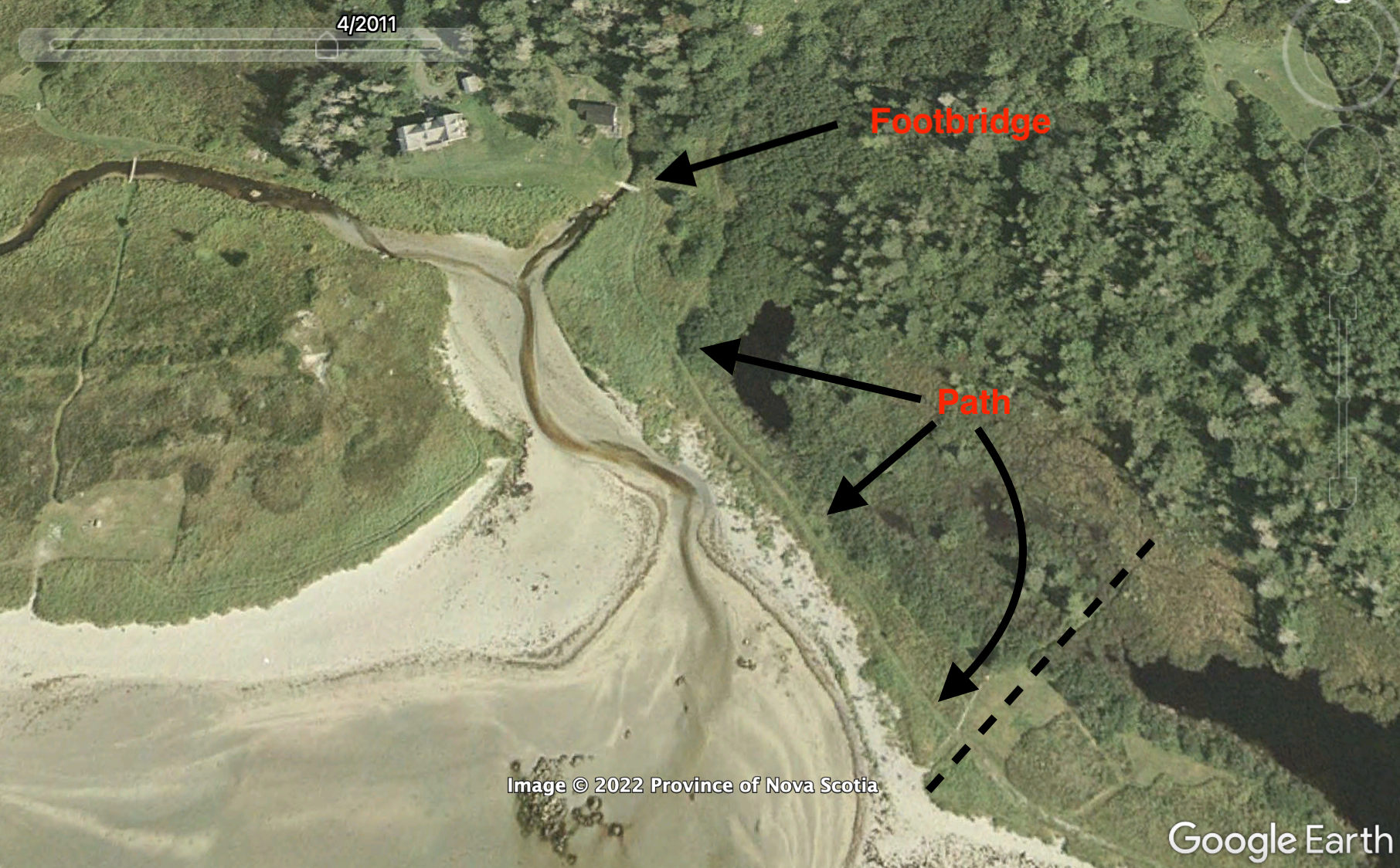 Mourre took me to what he called Schoolhouse Road, named after a one-room schoolhouse that served the community until 1959. (The structure burned down in 2000.) Mourre said that when the school was operating, the province constructed a footbridge over the brook so that children who lived to the south and east could get to school via the path that led from Eagle Beach Road, through what is now Kelly’s property.

Some years ago, the footbridge was reconstructed by community members, said Mourre. 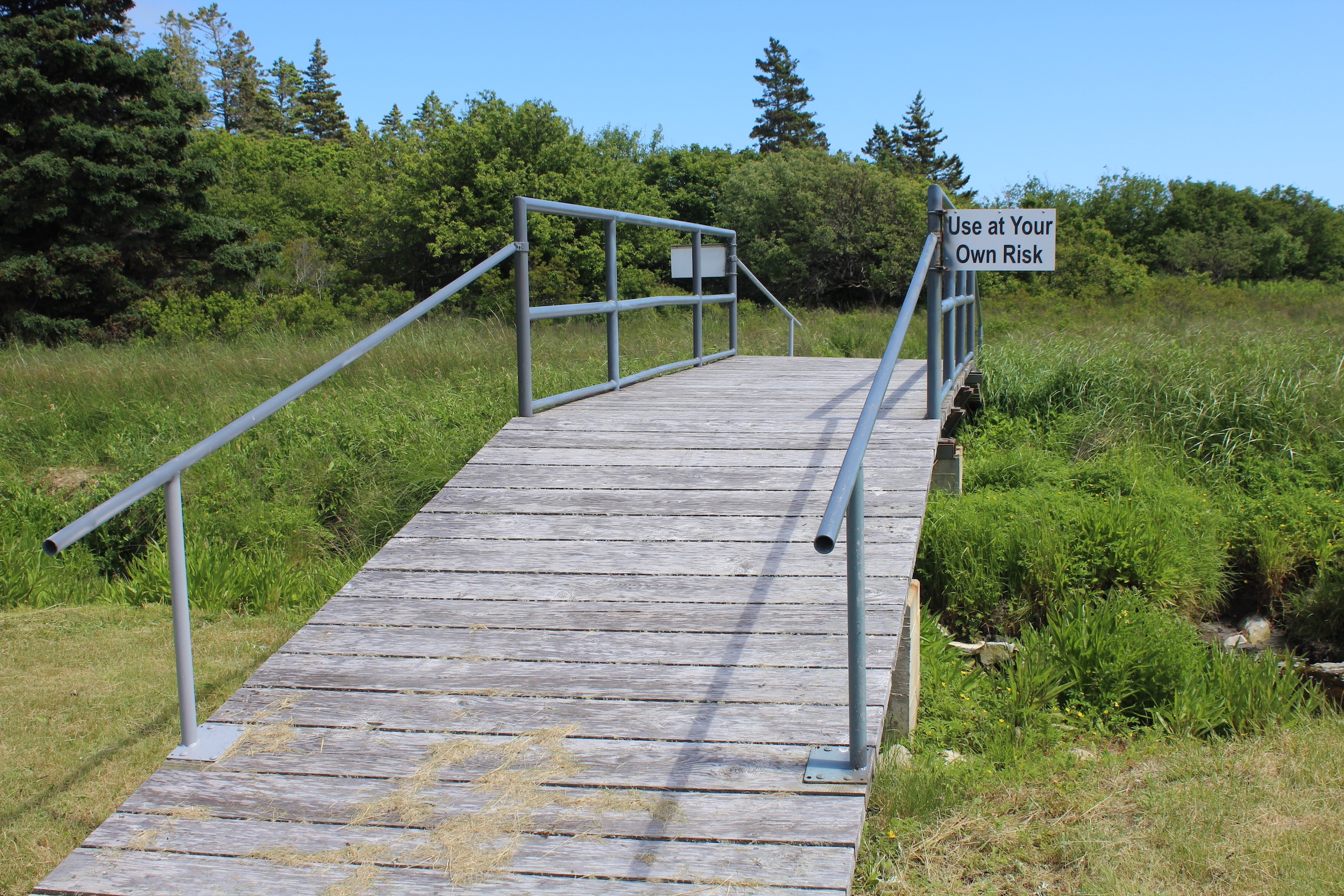 The deed to Kelly’s property does not show a right-of-way through the property. Mourre and Leslie both told me the community should have historic rights to the path, but they haven’t yet taken that claim to a court. Meanwhile, they said, Queens-Shelburne MLA Kim Masland has asked for a survey to see if there could be any provincial claim to the old road.

Kelly, however, has blocked the path at both edges of his property. 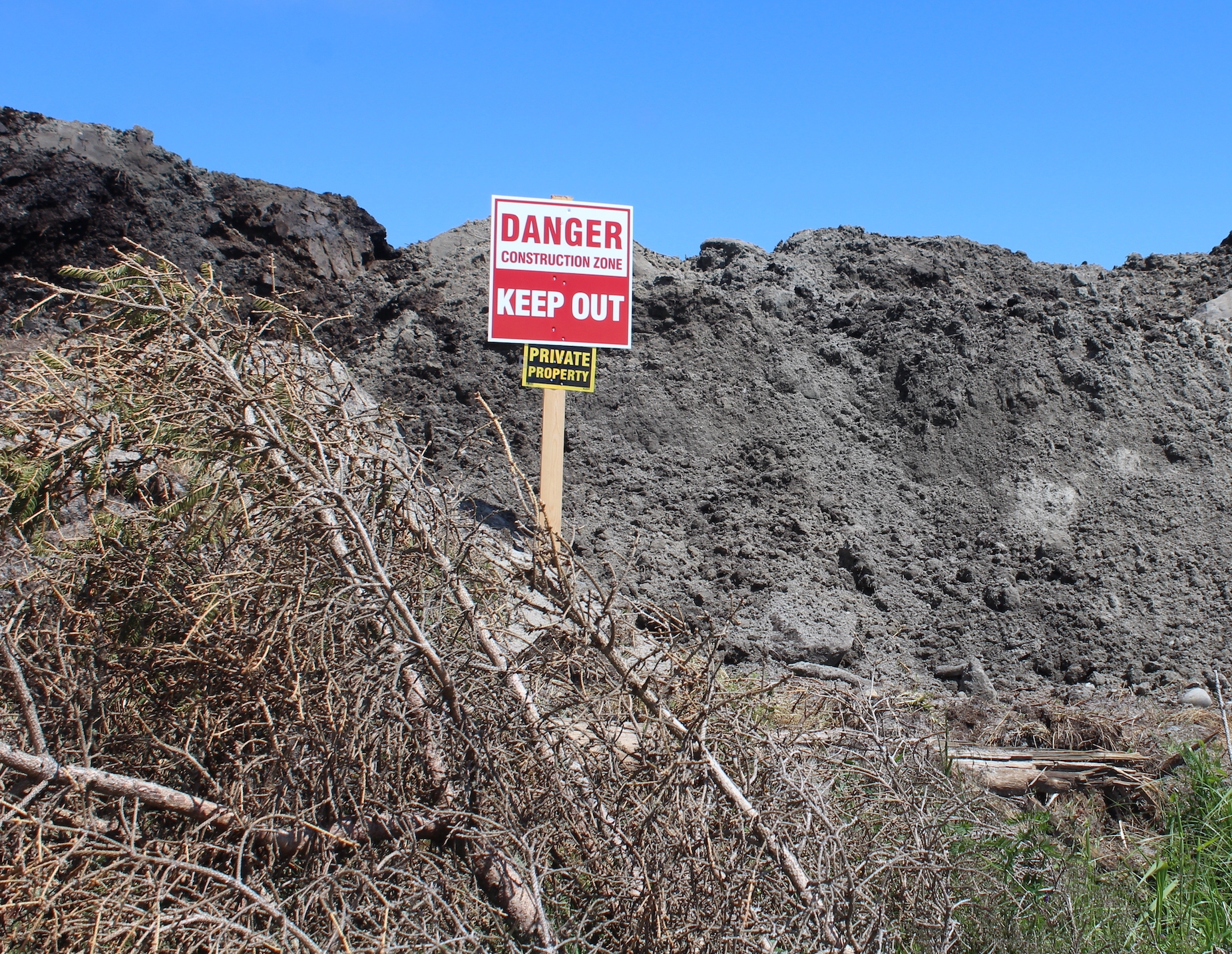 The path is barricaded at the western/northern edge of Kelly’s property. Photo: Tim Bousquet / Halifax Examiner

At the western/northern edge of the property, Kelly has had logs and brush thrown across the path, which is impassable in any event as a large pile of construction dirt is an effective wall to any would-be hiker. For good measure, a “keep out” sign is posted. 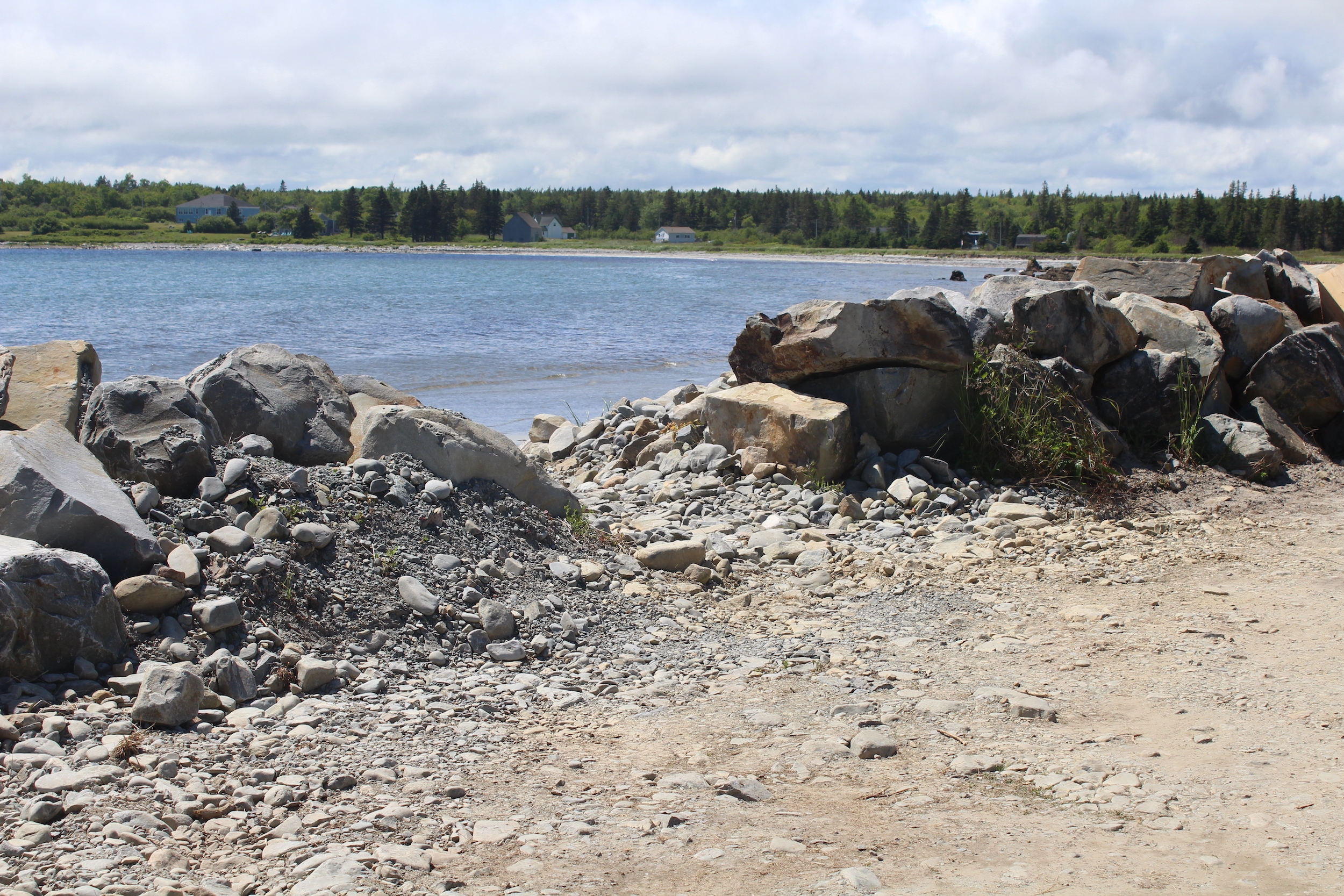 At the eastern/southern edge of the property, where the public Eagle Head Beach Road ends, Kelly has punched a hole through the riprap protecting the road from storm surges. This, said Mourre, was Kelly’s way of providing a pathway to the beach, but it appears to me that this additionally provides a pathway for storm surges to destroy the road. It also appears that Kelly is preparing to install a gate at this location.

It’s possible to walk along the beach from Eagle Head Beach Road and rejoin the footpath to the west of Kelly’s property — that’s the route Mourre and I took Wednesday — but only when the tide is out.

Meanwhile, the community has formed a private Facebook group called Protecting Eagle Head Beach, which now has about 400 members. And, they are contacting the Department of Environment and other regulatory agencies about their concerns.

The group is concerned that Kelly has “connections” among politicians and government officials, and so may be able to continue his construction despite the community concerns.

I’m attempting to contact Kelly for his view on these matters, and should he respond, I’ll update this post. 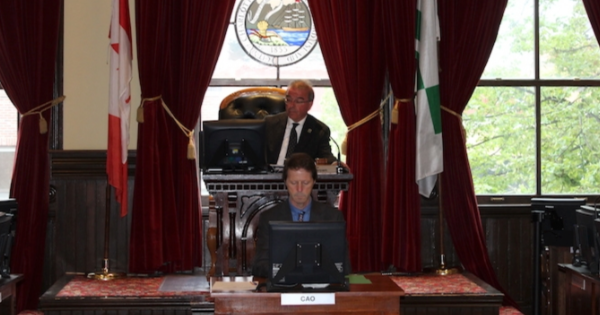 Impropriety and scandal have dogged Kelly throughout his public career.

In 2007, when Kelly was mayor of Halifax, he, CAO Wayne Anstey, and Trade Centre Limited president Scott Ferguson conspired together to evade accounting principles and municipal financial controls with a secret and improper loan scheme to fund concerts on the Halifax Common; the financial house of cards eventually collapsed in scandal.

In 2012, I authored an exposé on Kelly’s role as the executor of the estate of Mary Thibeault. Kelly had left the estate in limbo for over seven years, and had improperly paid himself $145,000 from the dead woman’s bank account, depriving other heirs, including charities, of hundreds of thousands of dollars that rightly belonged to them. Only after my article was published did Kelly come to a secret agreement with the heirs. He also decided to end his career as mayor.

Kelly moved on to become CAO of Westlock County, Alberta, from September 2014 to March 2016. A municipal review of his tenure found that he employed “irregular” governance, failed to follow county procurement policy, contravened the provincial Municipal Government Act, improperly hired friends as consultants, and botched a land deal, costing the small county a quarter of a million dollars.

From there, Kelly was hired as CAO of the city of Charlottetown, where he was accused of more financial irregularities and failures in management. He was fired last month.