On Friday, March 27, the provincial government gave Cermaq Canada an extension on the deadline to file an application for its options to lease in four bays in the province.

The firm is part of Cermaq Global, formerly a Norwegian state-controlled salmon producer purchased by Mitsubishi Corporation in 2014 for $1.4 billion, with operations in Norway, Chile, and British Columbia.

The company is proposing a $500 million expansion to develop between 15 and 20 open-pen Atlantic salmon farm sites, four hatcheries and two processing plants and needs a minimum annual production of 20,000 metric tonnes of fish. That’s an amount that, according to provincial and federal data, would increase the number of salmon farms in this province from eight to 28 and would more than double the current levels of production.

The Halifax Examiner has extensive coverage of this story here, here, and here.

Last year the province granted the company an “option to lease” in a number of areas including Chedabucto Bay, Bay of Rocks, and South Guysborough — all in Guysborough and Richmond Counties — St. Mary’s Bay near Digby Neck, and Mahone Bay and St. Margaret’s Bay on the South Shore. Four of the six options were set to expire Friday, and were not eligible for another extension, but the company was given an indefinite reprieve.

The options for the two South Shore leases expire on July 9. 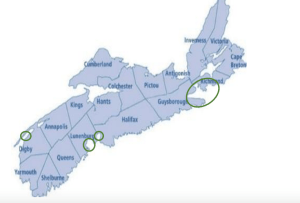 In a statement the Department of Fisheries and Aquaculture (DFA) said that “in response to the ongoing COVID-19 situation [it] has reviewed the directives from the Chief Medical Officer of Health for the impacts to aquaculture services and licensing and leasing processes,” and determined that “there is a temporary suspension of approved Option period expiry dates” allowing for the applicants to “continue community engagements but only after the social distancing restrictions are discontinued.”

On the same day, Cermaq spokesperson Amy Jonsson, in an “update” said, “We have received notice from the Province…that in recognition of these extraordinary circumstances and the impact it has on the ability to carry out feasibility and engagement work, they have temporarily suspended the Option to Lease expiry period until further notice.” Jonsson said the company now plans “to share” its decision the week of April 6, 2020, well before any social-distancing restrictions are likely to be lifted.

“As with everything currently, this may change, but we do commit to continuing to provide updates and moving forward in a transparent and accountable manner,” she said

It should be noted that the day before the company’s deadline, it was reported that the Canadian Aquaculture Industry Alliance (CAIA) — a lobby group for the industry — sent a letter to Canada’s fisheries minister, Bernadette Jordan, asking that what it calls “critical needs” be met, including that she relax regulatory requirements during the coronavirus pandemic. 1

In addition to relaxing regulatory requirements, the industry’s list of “critical needs” is nothing short of astonishing. It is calling on the federal government to:

• define aquaculture as an essential service and provide access to farm income supports;
• provide payroll support;
• provide “catastrophic loss protection” or funds in the event of “major losses” due to “animal welfare impacts” as a result of fewer workers;
• allow for targeted exemptions at border crossings; and  — get this
• provide the industry’s “front line workers” with “priority access” to COVID-19 testing and safety equipment such as N95 masks, gloves, and sanitizer,

Sorry, but I’m having a hard time comprehending the industry’s sense of entitlement by a) characterizing fish farm workers as being on the “front lines” in this pandemic, and b) that they, like publicly funded health care workers, should be given “priority access” to an already limited quantity of life-saving equipment.

Fisheries Minister Bernadette Jordan also happens to be the Member of Parliament for Nova Scotia’s South Shore-St. Margaret’s — which includes the affected areas for two of Cermaq’s options to lease.

Here in Nova Scotia, where aquaculture falls under the province’s jurisdiction, it was reported that the Aquaculture Association of Nova Scotia also lobbied the government for a postponement of Cermaq’s deadline, as well as that of two oyster farm applications also in the option phase.

The suspension of the expiry date came as a surprise to Casie Melanson. She and her husband Matt Melanson are owners of the St. Mary’s Bay lobster fishing outfit East of the Moon Fisheries in Lobster Fishing Area (LFA 34). She is also a member of Cermaq’s Community Information and Advisory Committee (CIAC) established by the company as part of the “scoping phase” of the province’s new regulatory process.

The crew of East of the Moon Fisheries: On left, third man Brandon Tidd and his fiancé Rayanne Amero. Holding sign, Casie Melanson, with her son Angus and husband, Matt Melanson, the Captain and Owner of East of the Moon Fisheries. On right, first mate Dana McCullough and his partner Ayla Parker. Melanson says: “We’re a boat with crew under 30 years old, all making a living on Digby Neck and starting our families.” Photo courtesy Casie Melanson.

According to CIACs “Terms of Reference,” the purpose of the committee is “to listen and engage directly with the interested stakeholders and businesses in the local community,” and to “serve as a method to begin and maintain two-way communication and develop a better sense of the communities where we are investigating potential expansion.”

But according to Melanson, apart from one meeting held on February 18, she’s received little if any information. The group was scheduled to meet again on March 24, but that was cancelled due to the virus, she says.

“I am the only person on the committee from the affected area… the majority of the people are from the town of Digby and are in no way affected by the feedlots and were clearly hand-picked to be in favour of the [proposal],” she tells me.

Melanson says roughly 45 lobster boats fish out of Sandy Cove, Little River, and Tiverton Harbour, which are all along Cermaq’s proposed lease locations.

“During the fall we fish out of Little River and then in winter and spring, out of Sandy Cove,” she says.

“Normally a boat would hug the shore going up and down the bay, but the proposed feedlots will make this impossible, adding time to days and fuel costs,” she says. 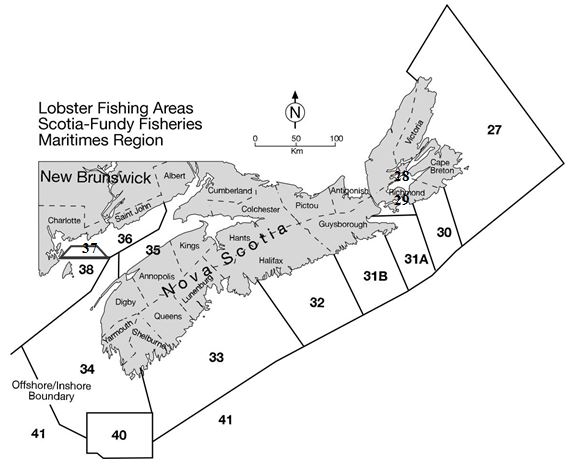 Melanson says that when Cermaq’s Sustainability Development Coordinator, Melinda Cole provided the committee with the proposed site lease locations on February 18, Cole asked for the group’s input because the company was looking to narrow it down from the proposed six sites to four sites. But when Melanson showed the map to her husband and her father they both said that all the proposed sites were situated on what’s called the “240 line.”

“It’s essentially a lobster highway, so it wouldn’t matter which sites they removed because they were all detrimental,” she explains. 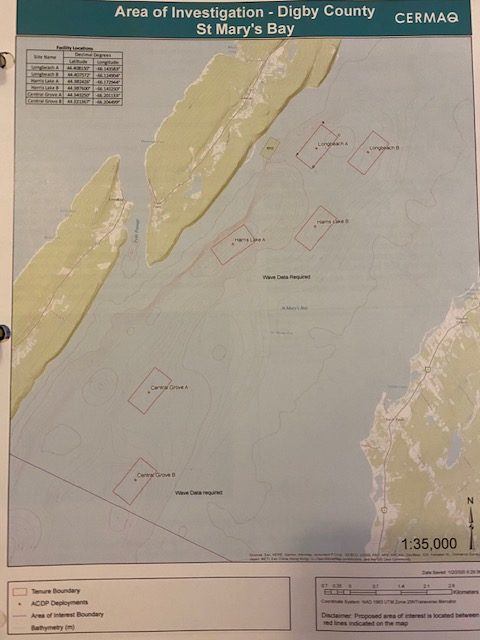 When I ask Melanson to explain what she means by the “the 240 line” she sends a photo of one of her husband’s charts: “Have a look at the line I circled in red and follow it up and down. The last three digits are 240, it’s just a chart line down St. Mary’s Bay. As for ‘lobster highway,’ that’s just slang for an area with a lot of lobster moving up and down depending usually on water temperature.”

According to Statistics Canada data, in 2018 the total catch value of lobsters in LFA 34 alone was $357 million, by far the most lucrative of all LFAs in the province, accounting for nearly 42 percent of the total value of $855 million.

Melanson says she never heard anything about whether the six sites were narrowed down to four. 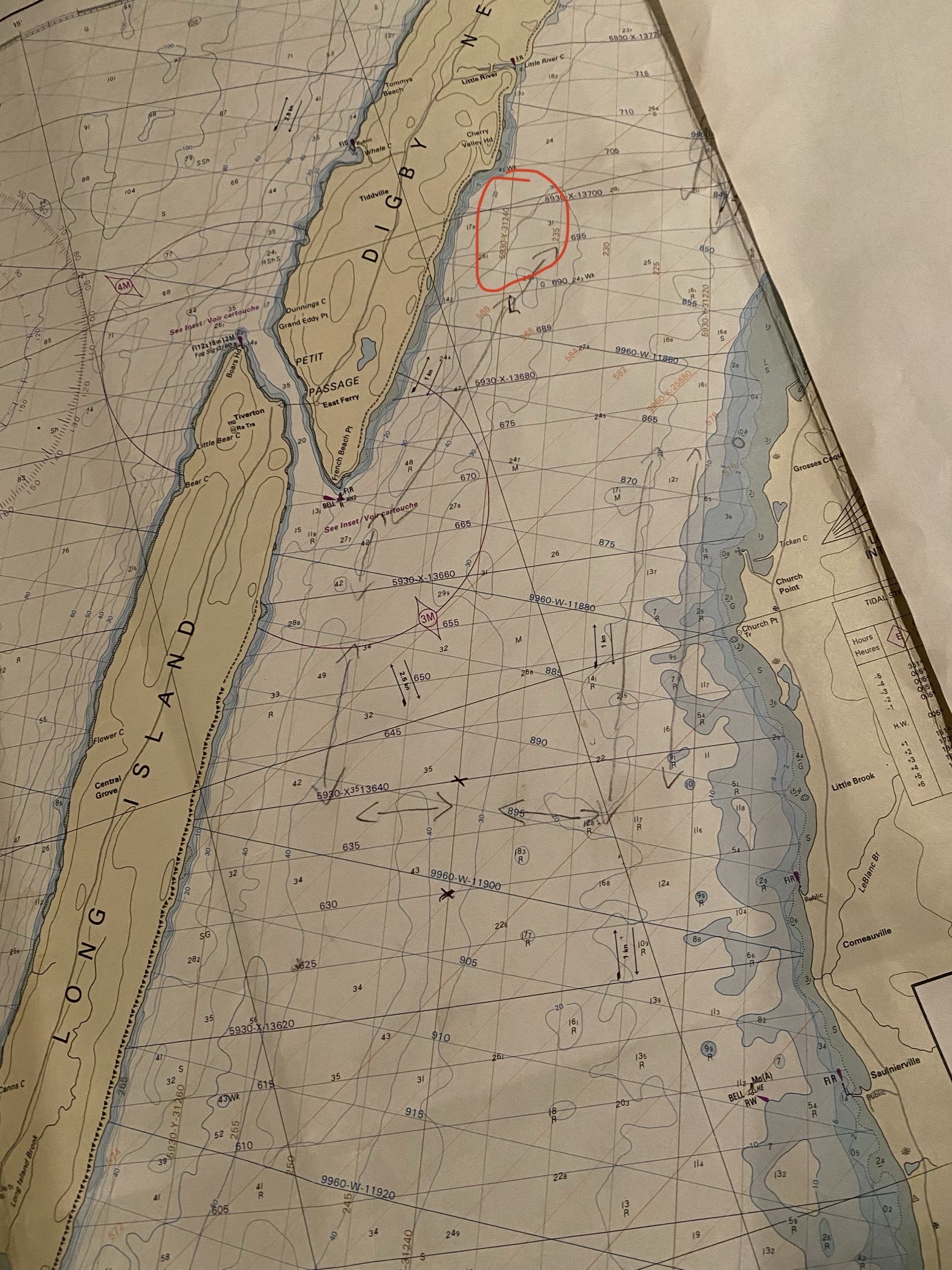 The ‘240 line’ or “lobster highway,” a travel corridor for lobster. Photo: Casie Melanson.

Even though Melanson was on Cermaq’s CIAC for St. Mary’s Bay, she heard about Friday’s deadline deferral like everyone else, through email and social media. If the company does in fact decide to file an application with the province by April 6, as it has suggested, it remains unclear if or how the company plans to meaningfully engage with the committee or the affected communities beforehand.

“I have also noticed via social media that people are finding it harder and harder to get emails through to Cermaq,” she says. “Emails are bouncing back or being blocked.” Melanson says she’s had this problem herself and for its part the company has claimed they are “technical growing pains.”

According to the Terms of Reference for the CIAC, a Cermaq employee is to keep a record of the meetings and distribute notes for review within one week of the meeting adjourning. As well, minutes of the meetings are to be posted publicly on the company’s HelloNovaScotia Web site.

However, I was unable to locate any minutes, and my emailed questions to Cermaq spokesperson Amy Jonsson about the minutes, as well as the names and affiliations of the committee members (in all option regions), have not been answered.