The federal and provincial governments have confirmed they’ll help Halifax pay for the planning of one of the new ferry routes proposed in last year’s Rapid Transit Strategy.

The Mill Cove ferry — one of three proposed in the Rapid Transit Strategy, HRM’s plan to create a grid of rapid bus and ferry routes — would take passengers from Bedford to downtown Halifax in 18 minutes. 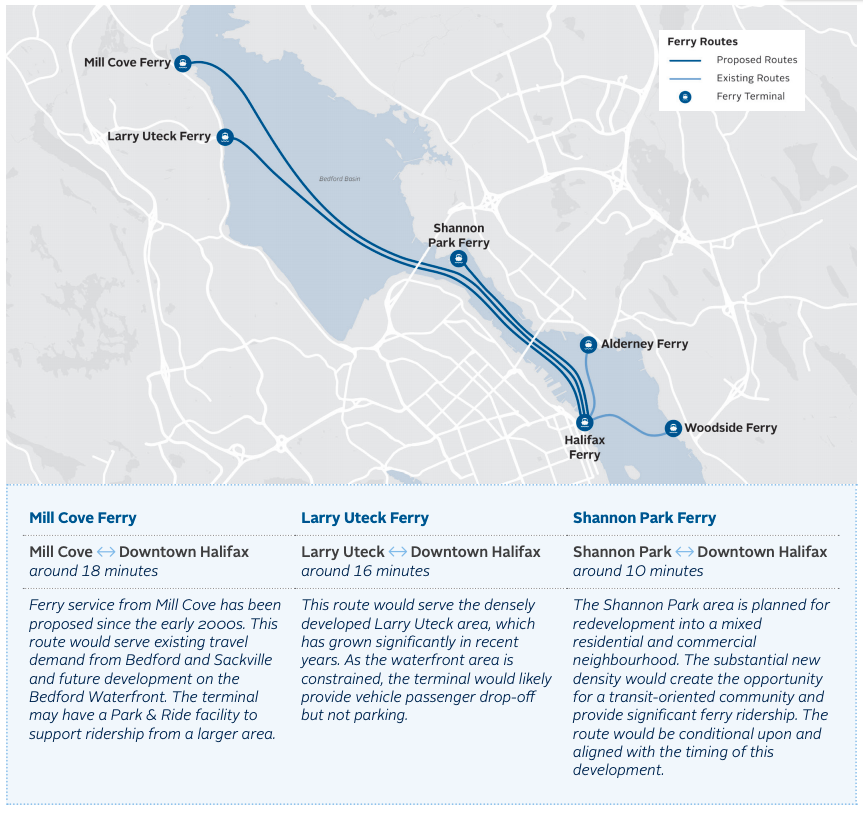 The three new ferry routes proposed in the Rapid Transit Strategy, along with the existing two.

“The Mill Cove Ferry Service is one of the key components of the recently adopted Rapid Transit Strategy,” reads the municipality’s 2021-2022 capital budget. “This new, 11km route would provide a fast, comfortable, and sustainable form of transportation and reduce pressure on the Bedford Highway.”

The total estimated capital cost of the project is $134.5 million. As of budget time, the municipality planned to spend $2.9 million this fiscal year on service calibration, vessel technology, and engineering studies, along with terminal designs. The budget banked on $2,117,000 in “external funding,” with HRM spending $783,000.

On Thursday, the provincial and federal governments held a news conference to “announce” the ferry, which has been officially planned for more than a year, and to detail their funding commitments.

An example of a fast ferry from the Rapid Transit Strategy. — Eric Kilby/HRM

The provincial funding commitment was mentioned in this year’s provincial government business plan, but without detail:

Significant electrification of public transit including new electric buses for transit authorities, new hybrid ferries, a new ferry route from Bedford Basin to downtown Halifax, and enhanced active transportation networks around the province will be explored.

The actual numbers have increased since HRM passed its budget: the province will pitch in $1.1 million for a $3.3-million study which it said in a news release “will include the concept design for the new terminal building, site access and site design.” The federal government will pay $1.3 million, and HRM will cover the remaining $917,000.

The news release said the study will explore technology options for using an electric ferry, and “The Bedford terminal will be a net-zero, energy efficient building.”

A concept design of that new terminal, along with a retrofit of the Halifax terminal to accept the new ferry, is due in early 2022, the release said.