You are here: Home / Environment / “Everything won’t stink so bad”

The children of Pictou Landing First Nation didn’t mince words when they addressed the standing-room-only audience that had gathered in their school gymnasium on January 31, 2019 to mark the start of the one-year countdown to the legislated closure of Boat Harbour.

Once the mill stops pumping its effluent — up to 90 million litres of the reeking stuff every day — into the lagoon that backs up against their Reserve, Alden Francis told the audience that “everything won’t stink really bad” any more. He said he can’t wait for the smell to be gone.

But it’s not just Boat Harbour that stinks.

A day before Pictou Landing First Nation (PLFN) Chief Andrea Paul and her community, together with allies from all over Nova Scotia, were to celebrate the countdown to the long overdue closure of Boat Harbour, Northern Pulp suddenly announced that it would be holding an RSVP-only press conference in the swanky office of its law firm, McInnes Cooper, in Halifax.

And it would be doing so one hour before the Pictou Landing First Nation event started on Thursday morning.

The announcement from Northern Pulp Nova Scotia Corporation and Paper Excellency Canada invited members of the media (select members, that is 1) to attend an “information update regarding the registering of the wastewater treatment facility environmental assessment as well as timelines leading up to this project milestone.”

Northern Pulp had had nearly four years to design this new waste treatment and disposal system and to register the plan for an environmental assessment. (Linda Pannozzo has written extensively for the Halifax Examiner on the mill’s effluent treatment and emissions in her Dirty Dealing series: here, here, here and here.)

The company had known since the Boat Harbour Act was passed in the spring of 2015 that it would have to stop using Boat Harbour for its effluent on January 31, 2020. 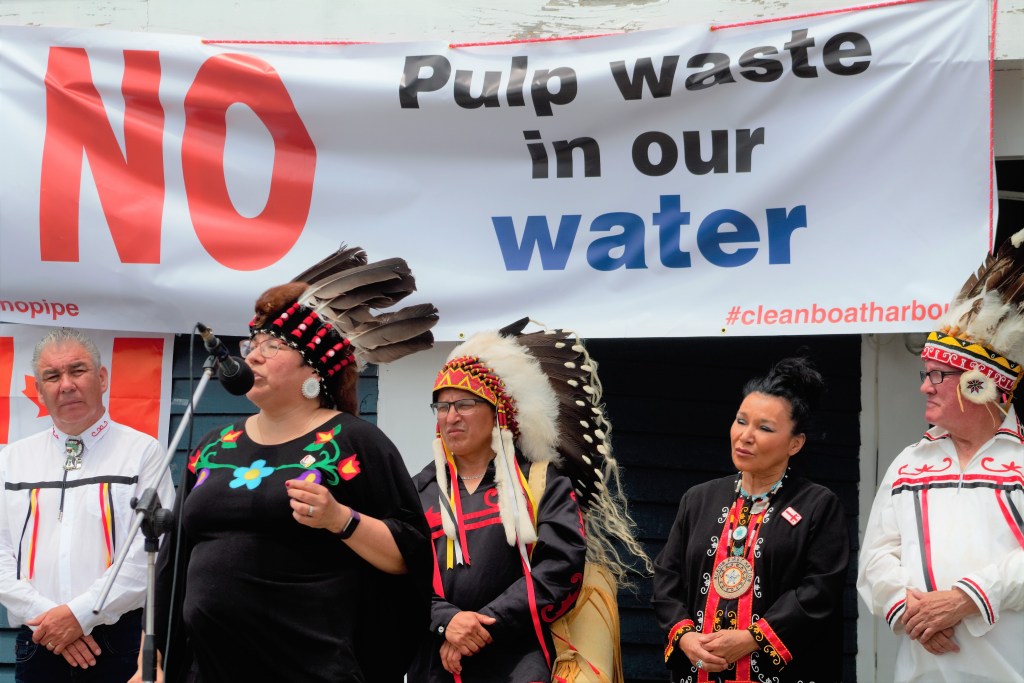 Northern Pulp also knew that the Pictou Landing First Nation had planned the one-year countdown celebration for January 31, 2019. Nevertheless, it chose that day for its press conference, prompting Chief Andrea Paul to write this on her Facebook page:

So Northern Pulp knew PLFN was organizing this big day of celebration and honour. They decide this would be the best time to announce their submission. Yet — will have conversations about “building relationships” with PLFN. Northern Pulp you are #fakenews. You continue to play these games. You continue to find ways to create division and ill-feelings. #31January2020 Honour the Boat Harbour ACT.

The morning of January 31, 2019, saw media in this province heading to two different destinations to cover two very different events related to Boat Harbour and its closure date.

“We’re going to warrior up”

One was a powerfully symbolic and emotional occasion, held within smelling distance of the mill and its toxic legacy in Boat Harbour on the Pictou Landing Reserve, and organized by the community that has had to live with the pulp mill waste in its backyard for the past 52 years. The event featured prayers, a smudge ceremony, drumming, dancing, those heartfelt children’s speeches, a timeline showing how many times previous provincial governments promised PLFN that Boat Harbour would be closed and then betrayed those promises, and a memory wall featuring the photos and names of elders who died without seeing an end date for Boat Harbour. 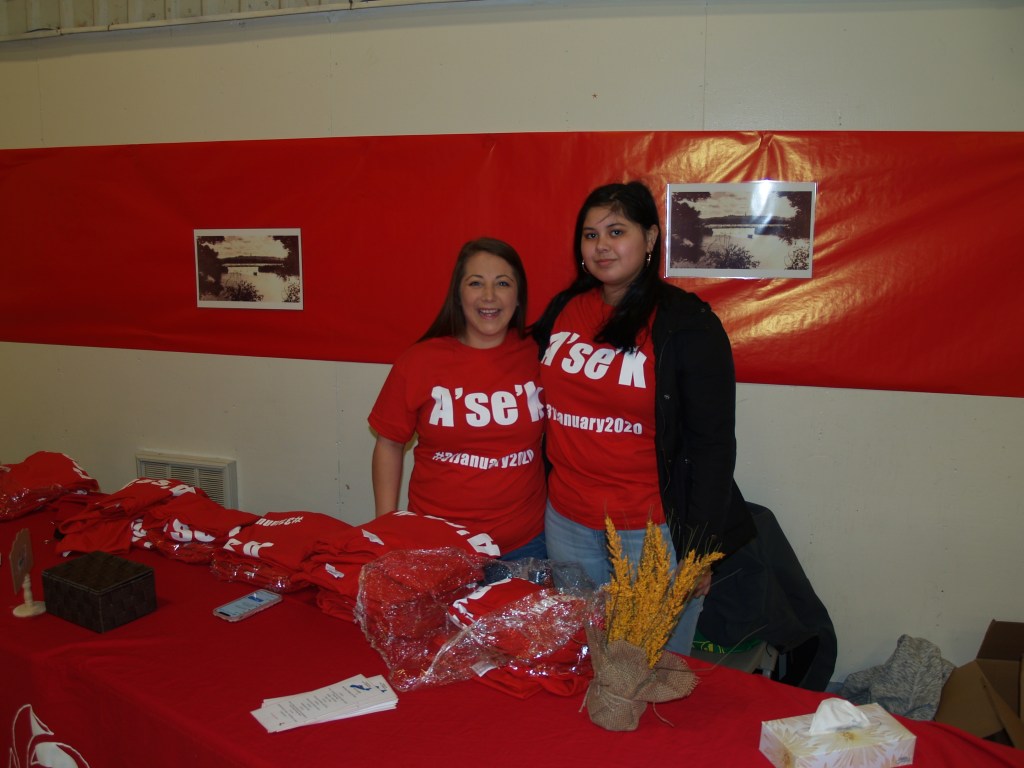 Sidney Peters, Chief of Glooscap First Nation and co-chair of the Assembly of Nova Scotia Mi’kmaq Chiefs, read out a letter of support from the Assembly to Chief Paul and PLFN for their advocacy and work to address the issues of Boat Harbour, something that “will impact the entire Mi’kmaq nation.”

Chief Andrea Paul struggled with tears when she took to the stage to speak about the suffering caused in her community by the effluent in Boat Harbour, a body of water that was so vital to their livelihoods and lives that they called it “A’se’k” or “the other room.” And she imagined the day, in a year’s time, when the pulp mill’s waste would stop flowing into the lagoon and its remediation could begin.

Michelle Francis-Denny, community liaison person for the Boat Harbour remediation project, reminded the audience that this was not the first time the people of PLFN had gathered in the school auditorium to speak about the Boat Harbour closure.

They did so five years ago, she said, after the community had spent a “long and stressful week” on the frontline of a blockade of the mill. That blockade followed a pipeline break that spilled 47 million litres of toxic effluent from the mill onto sacred Mi’kmaq burial grounds. The PLFN had refused to end the blockade without commitment from the province on a closure date for Boat Harbour.

When they had met in the auditorium back then, said Francis-Denny, it was to discuss the agreement in principle that had been presented to the PLFN. On Thursday morning, she reflected on how that meeting went:

Of course we were reluctant because of our sordid history with government, but in the end, we stood together and we accepted that they would put in place the firm timelines that they negotiated with our leadership. In 2015, the Boat Harbour Act became law: January 31, 2020, [and the] wheels are in motion. At that time, it was too long. We weren’t happy with the date, but in the spirit of understanding, planning a remediation project of this calibre, we wanted it done right, we accepted.

We shed a lot of tears, we had a lot of different feelings but in the end, we all stood together.

We held hands and … we stood together … we said a prayer that this would be an end to the pollution. Fast forward to today, we gather here once again this space where we once stood alone, with the weight of the world on our shoulders. We are here now with our new allies, our supporters who have become friends, who have taken the time to understand our story and for that, we thank you.

Francis-Denny said it is time, with Boat Harbour closing, to make “A’se’K” a household name, and she urged the audience to shout out the name several times and get to know it, as Boat Harbour will no longer exist once the effluent stops flowing.

Two political parties were represented at the event. NDP leader Gary Burrill and Green Party leader Thomas Trappenberg were both there for the celebration. Notably absent was Progressive Conservative Party leader, Tim Houston, who is also MLA for Pictou East, where Boat Harbour is located.

Among the allies present were many fishermen and others who have worked with citizen groups that have protested the mill’s pollution and environmental impacts over the years, such as Clean The Mill and Friends of Northumberland Strait, and continue to do so today.

At the same time the PLFN was happening in Boat Harbour, another event was occurring in the staid atmosphere of the offices of the McInnes Cooper law firm in Purdy’s Wharf Upper Tower in Halifax. There, Kathy Cloutier, director of corporate communications for Paper Excellence Canada, was telling journalists a very different story.

Northern Pulp was asking for an extension on its use of Boat Harbour, and announced that it had filed its Environmental Assessment for the new treatment system. Former Nova Scotia premier John Hamm, who is chair of the Northern Pulp Nova Scotia Corporation board, and who was in office when the province granted the mill a lease extension of 25 years for the use of Boat Harbour until 2030, was not present.

Although Northern Pulp announced that it has registered its effluent treatment and disposal project with the provincial government, as of this writing it doesn’t appear on the Nova Scotia Environment page that lists projects registered for environmental assessments.

Northern Pulp plans to install an activated sludge treatment facility on site, and according to a December 2018 study by the consulting firm Stantec, 84 million litres of uncooled treated effluent a day will be piped across the causeway linking Abercrombie Point with Pictou, overland several kilometres to a site near the Caribou ferry landing, and then out into the Northumberland Strait.

Fishermen in three provinces and many other citizens oppose this plan to dispose of pulp effluent in prime fishing grounds, as the Examiner has reported here and here. And no one has been more adamant that there will be “no pipe” in the Strait than Chief Andrea Paul and PLFN fishermen.

Still, on the same day that so many of the people were in Pictou Landing to celebrate the closing of Boat Harbour in exactly one year,  Kathy Cloutier was telling the media in Halifax, “We all have the same goal. We just need a little more time.”

Global News quotes Cloutier as saying, “Some will say they have heard this before, and look where we are now. We recognize this, and relish the opportunity to be the exception rather than the rule,” and, “If we have no barriers or hiccups, then we would be looking for (an extension) in the proximity of a year.”

While the people of Pictou Landing First Nation were celebrating what Chief Paul calls the “sacred” date enshrined in the law that stipulates Boat Harbour will close in a year’s time, representatives of the multinational corporation owned by a billionaire family in Indonesia were telling the media they want the province of Nova Scotia to change that law to allow them to continue filling it with pulp effluent.

To his credit, so far Premier McNeil is showing no sign of capitulating to Northern Pulp’s high-pressure PR and letter-writing campaign and its audacious ask to get an extension for the use of Boat Harbour. On Thursday morning, he told reporters that “a deadline is a deadline.”

New Glasgow News reporter Brendan Ahern writes that a large painting by artist Cheryl Denny depicting “A’se’K” as it once was and one day will be again, now stands in Pictou Landing. At the top of it are a set of numbers that change daily. Today the number is 364.

The countdown for the closure of Boat Harbour has begun.

Joan Baxter is author of  The Mill: Fifty Years of Pulp and Protest.