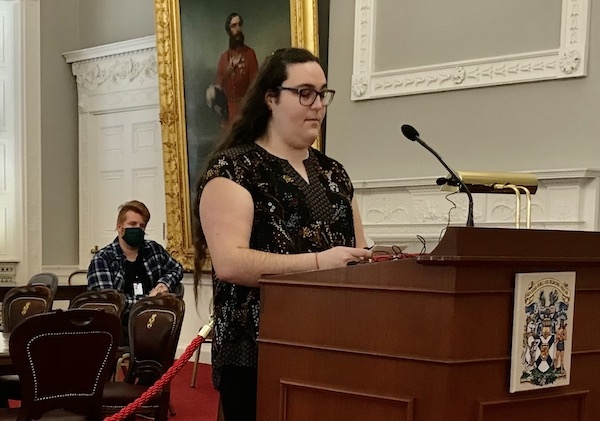 “This is a request to the government to provide equal pay for equal work,” said Claudia Chender, the NDP critic for Education and Early Childhood Development.

In 2018, the government introduced free pre-primary programs to help better prepare children for school, particularly those in families with no access to daycare.

The qualifications of the approximately 3,200 child-care workers who work in licensed private and non-profit daycares are the same as the roughly 880 who work in the school system. Both groups are regulated by the Department of Education. So why do Early Childhood Educators (ECEs) who work in schools receive higher wages and better benefits than those who work for in daycare centres owned by either a private employer or non-profit group?

Chender hosted an in-person news conference at Province House this morning (a rarity with journalists wearing masks and easily able to distance in the cavernous Red Room), where she introduced Daphne Hahn. Hahn is an ECE who has been working at St. Joseph’s Childcare Centre in Halifax for five years. She spent four years before that earning an ECE degree at Mount Saint Vincent University. Hahn has a Level 3 certification and earns $19 an hour.

Unlike her colleagues who work with kids in an elementary school setting, Daphne has no opportunity to pay into a pension plan while working at a daycare. Her medical benefits package costs her twice as much as what employees at schools pay. And, although the compensation varies among Regional Education Centres across the province, Daphne could be earning $5 an hour more in a pre-primary classroom in Halifax.

Daphne says she didn’t get into the field for the money and she doesn’t begrudge what her colleagues working in schools have. As an Early Childhood Educator working in a daycare, what she wants from the Education minister and premier is the same level of economic security: equal pay for work of equal value.

Margot Nickerson represents unionized workers at six child-care centres in HRM and seven non-profit daycares elsewhere in the province. The CUPE representative said a campaign is being launched to improve economic security for all childcare workers across the province, regardless of where they work and whether they are unionized.

EconomicSecurity.ca will require public support, Nickerson told the news conference, to hold the premier accountable to spend money that the federal government has earmarked for supporting child-care that the province has not yet tapped.

According to a report released by the Canadian Centre for Policy Alternatives, as of December 31, 2020 Nova Scotia had not submitted a plan to pick up on $10.8 million available under Ottawa’s “Supporting the Early Childhood Education Workforce Fund.” Nickerson says this money should be used to establish a province-wide salary scale for Early Childhood Educators regardless of where they work.

“The inadequate funding does not allow child-care centres to offer wages and benefits and pension plans to their Early Childhood Educators like what is being provided to ECEs in the public school system,” said Margot Nickerson, CUPE representative. “This inequality is one of the biggest challenges facing the child-care sector today in Nova Scotia.”

Nickerson said the establishment of the pre-primary program in schools has made it more difficult for private and non-profit daycares to compete for staff. This has increased the workload on the pre-school teachers who remain and risks diluting the quality of the programming daycares can provide when teachers with higher levels of certification migrate to the school system where they can earn a better living.

The government’s response to staff shortages has been to expand the role and increase the pay for daycare “assistants” — a response similar to what happened when the government provided nursing homes with money to hire lower-paid “assistants” to back-fill for Continuing Care Assistants.

Claudia Chender said although the NDP supported and endorsed the government’s decision to establish a universal pre-primary program, it warned the Liberals the move could ”de-stabilize” the province’s daycare system without a significant increase in funding. Chender said that’s what’s happening today — and unless the Department of Education invests more money in paying Early Childhood Educators and expanding access, fewer women are likely to go back to work during or after the pandemic if child-care remains inadequate..

“During the pandemic last spring, I think this government had no choice but to pay to keep daycare centres whole because if they didn’t, the centres would close and tonnes of people would be out of the workforce,” said Chender. “That was a good choice but it was the bare minimum. The govt rolled out a universal program for all four-year-olds in the province and we said then they would need a phase 2, universal low-cost childcare program that would eliminate these disparities we’re talking about now.”

In Quebec, where the provincial government has funded universal daycare for 20 years, participation rates for women in the labour force are the highest in North America. Chender believes providing people who work in childcare with decent paying jobs and benefits could also go a long way to stimulating economic recovery here.