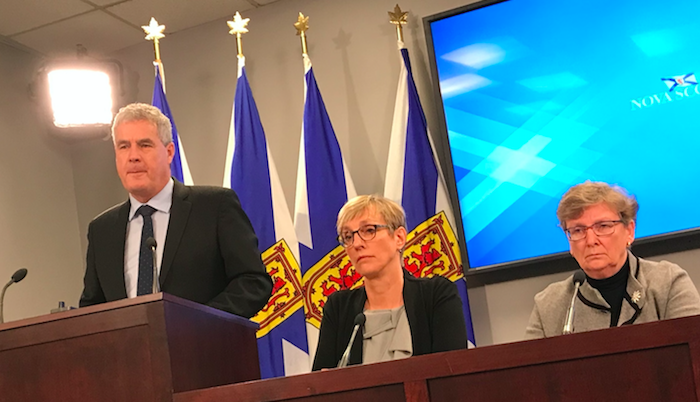 Nova Scotia’s Environment Minister is ordering Northern Pulp to produce more information and complete a full environmental assessment before he will approve the mill’s proposed wastewater treatment plant and a pipeline bringing the effluent from the plant to the Northumberland Strait.

The project will replace a 50-year-old polluting system that dumps into Boat Harbour that the McNeil government passed a law to close by January 31, 2020. It’s unclear how the decision by the Environment Minister requiring more information — a process which allows the company up to two years to file — will affect the government’s promise to the neighbouring Pictou Landing Nation to stop dumping the effluent into Boat Harbour, possibly at the risk of displacing thousands of people with jobs in forestry.

NDP leader Gary Burrill said it was “grotesquely inconsiderate” of Premier Stephen McNeil not to “appear within the hour” to explain to people in the province whether the government intends to see Boat Harbour and the mill close at the end of next month, as the legislation requires, or whether the Liberal government would grant Northern Pulp’s request to extend the deadline. The premier’s office has not yet confirmed to the Examiner when the premier will be available to speak on this issue.

So Tuesday, December 17 was Environment Minister Gordon Wilson’s chance to explain the reasons for his decision to neither accept nor reject the proposal as first registered by Northern Pulp on January 31, 2018. The province had requested a further focus report containing more information about what’s in the water that would flow into the treatment plant, how the treated effluent would affect fish and human health, and what contingency plans are in place in the event of a leak in the pipeline carrying the treated wastewater.

More than 6,000 pages of comments from 3,254 people — including First Nations and five federal government departments — were received by the minister after the focus report was made publicly available. Minister Wilson said the decision “weighed heavily on him” and although he received the recommendation from his staff on December 3, he needed time to read and think before revealing his decision to the company and citizens today.

“While I appreciate the work that has gone into the focus report, there is more to do,” said Wilson. “The company has identified potential air pollutants and made progress on the baseline survey of freshwater fish. It is of the utmost importance to adequately assess the way this project might impact fish and fish habitat. There must be a very detailed plan to address the impact a leak [in the pipeline carrying treated effluent] could have on the Town of Pictou’s water supply. I also have questions about air emissions. An environmental assessment report will be expected to address all these issues, and others, to be successful.”

Northern Pulp Nova Scotia issued this statement by email within a couple of hours of the Minister’s announcement:

We are disappointed in the Government of Nova Scotia’s decision in response to our focus report and the requirement for an Environmental Assessment.

Our team put forward an in-depth plan based on sound science that showed no meaningful environmental impact, represented a significant operational improvement, and ensured Nova Scotia’s forest sector and the thousands it employs could remain a vital part of our economy.

That other shoe has yet to drop.

Environment Minister Gordon Wilson refused to comment on how this decision to extend the environmental assessment process would interact with a fast-looming decision on whether to recall the Legislature and extend the deadline to keep Boat Harbour open past January 31. He also told journalists that as of December 5, Northern Pulp has filed an application requesting an extension to its five-year operating permit, also known as an Industrial Approval. The permit expires January 31, 2020.

This is a process separate from the Environmental Assessment of the wastewater treatment plant with one significant overlap: the Environment Minister makes the decision on whether the company can continue operating. When asked by a reporter if Northern Pulp’s application for the Industrial Approval included the continued use of the Boat Harbour wastewater facility, the minister would not answer.

Question: “Does that [industrial approval] application include the ongoing use of Boat Harbour?”

Nova Scotia Environment Staff: “We are reviewing that to determine to see if the application is complete.”

Minister Wilson: “To clarify, the application that has been received is not complete. Until that application is complete, it’s really hard to speculate on any decision that’s going to be made on any application, in all fairness.”

Minister Wilson: “When a completed application is received, a decision by the administrator has a maximum of 60 days.”

Stay tuned, folks. It ain’t over ‘til it’s over.

Wilson’s decision to require more information from the company before approving the replacement treatment plant earned high marks from Ray Plourde with the Ecology Action Centre.

“There is no way the minister could have credibly approved this project today, that would have been a political decision and he did not do that today,” said Plourde. “The company’s air emissions plan includes taking tonnes of chemically-laced sludge and burning it in their power boiler which has inadequate pollution controls. Frankly from a human health perspective that is probably the most concerning thing.

“I would have liked Wilson to reject this and give people certainty,” continued Plourde. “Now it could go on for potentially two more years — but I can’t fault the minister for upholding his responsibilities seriously and without prejudice”.

Both NDP leader Gary Burrill and PC leader Tim Houston declared they did not have enough evidence to support the mill’s call for an extension to the January 31, 2020 deadline to close the Boat Harbour facility. Houston said he “sympathizes with the pressure the premier is under” but the PC leader also reiterated his contention the government could have chosen a better process to get there. “We’ve said from the beginning a Class 1 assessment wouldn’t give Nova Scotians the confidence required and I think what you are seeing from the Department of Environment now is they agree with that, that there should have been a higher level of scrutiny from the beginning.”