You are here: Home / Featured / Elections are no place to… Take 3 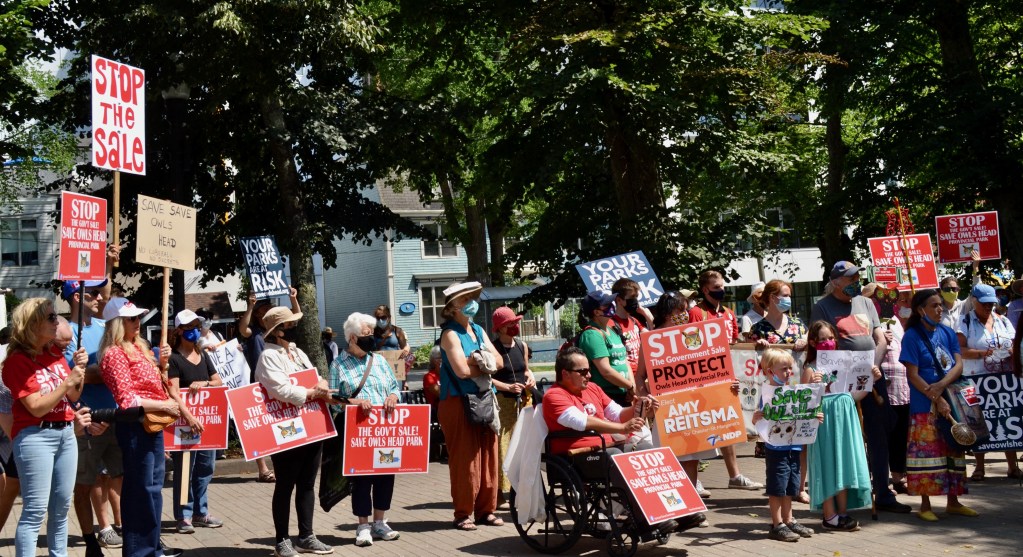 “Elected officials on occasion make decisions, and use procedures, that leave some constituents feeling betrayed and even incensed. Where those officials exceed their power, judicial review may provide a remedy. But where the decisions are within their lawful authority, as in this case, the court cannot intervene. In such circumstances, if a remedy is sought by the public, the proper recourse in our constitutional democracy is not through the courts, but at the ballot box.”

Honourable Justice Christa Brothers may have been legally right to conclude the courts have no business mucking about in the Liberal government’s March 2019 decision to secretly remove Owls Head provincial park from a list of publicly designated provincial properties awaiting legal protection under the government’s own Parks and Protected Areas plan.

She may also be judicially correct when she determined the government was operating within its “lawful authority” when it decided in December 2019 to quietly peddle the properties’ 700 hectares of a “globally rare ecosystem” on Nova Scotia’s Eastern Shore to private developers — also without benefit of public consultation or accountability. Those developers, of course, had stealthily lobbied the government over “several years” to greenlight their scheme to transform that previously public space into a private “recreational and residential community, which is expected to include one to three world-class golf courses, clubhouse, single-family homes, and short-term accommodations, enhanced seasonal and recreational activities” and blah blah blah.

But even if the judge’s legal reasoning is impeccable — and I for one would like to hear an appeal court weigh in on that — I can say, without fear of contradiction, that the good justice is out to a long liquid lunch with her ballot box “recourse”mumbo jumbo.

How many of those of us who will have cast ballots in Tuesday’s Nova Scotia general election will have done so based solely on the government’s Owls Head decision?

Some, certainly. But not many, not anywhere near enough for the ballot box to serve as “the proper recourse in our constitutional democracy” to confront this government’s egregious violations of public trust and accountability at Owls Head.

It’s not that voters don’t care about Owls Head. They do.

As of Saturday morning, a Facebook group opposing the sale boasted more than 9,800 members.

Back in February 2020, shortly after CBC reporter Michael Gorman broke news of the delisting and planned sale, 120 protesters marched on the legislature to “take the government to task because this is our property, this is our environment, this is our legacy for our children. And it’s not theirs to sell.”

On April 1, 2021, more than 100 sign-carrying, placard-waving folks showed up at the law courts building in Halifax to support the application for a judicial review filed by biologist Bob Bancroft and the Eastern Shore Forest Watch Association.

On August 7, in the aftermath of the judge’s decision, another hundred or so people carrying STOP THE GOVERNMENT SALE! SAVE OWLS HEAD PROVINCIAL PARK! packed Halifax’s Victoria Park on a sunny weekend afternoon to try to make the government sale an election issue.

There are so many other issues clamouring for our attention during this election campaign.

Not to forget COVID, which may not be done with us yet.

Or, how about the parties’ proposals for a post-COVID economic recovery, or for what an economy living with COVID should look like?

And my god, the climate crisis? We’ve been ignoring that for far too long.

So, how does the blunt instrument of our vote enable us to hold a government accountable for a specific decision like Owls Head?

Well, then, what can we do?

Before we come back to that, let’s take a moment to make clear that the judge, in her decision, never suggests the government came to its Owls Head decision-making table with clean hands:

Uncontested affidavit evidence filed by Ms. [Barbara] Markovits [an active member of The Eastern Shore Forest Watch Association since 2003] shows that Owls Head has been represented as a provincial park by the Nova Scotia government for decades…

An information sheet published in 2013 by the Province of Nova Scotia, titled “Owls Head Provincial Park”, notes that the property has “exceptional bedrock-ridged topography”, that piping plover (a designated “species at risk” pursuant to s. 12 of the Endangered Species Act) has nested on the Owls Head property, and that the land was “assigned to parks program as part of the province’s commitment to develop the Eastern Shore Seaside Park System”. This information sheet describes Owls Head Provincial Park’s status as “Reserve” and says it is managed as a “Supporting Park”. This information sheet is no longer available on the Department’s website.

In 2013, the Department of Natural Resources (DNR) and Nova Scotia Environment published the “Our Parks and Protected Areas” plan. The PAPA describes Owls Head Provincial Park as an “existing” provincial park, not a new one, and notes that it was to be managed as a “supporting park”.

An online, interactive map published by the Province of Nova Scotia titled “Parks and Protected Areas: A System for Nova Scotia” identifies Owls Head as “Owls Head Provincial Park”. According to Ms. Markovits, when she accessed the map on February 19, 2020, Owls Head was not depicted in the colour used to identify provincial parks. She said, however, that when she viewed the map on previous occasions, the colour used for Owls Head identified it as a provincial park.

An online map published by the Province of Nova Scotia and visited by Ms. Markovits on March 8, 2020, titled “Nova Scotia Registry of Claims” shows mineral claims in the province and identifies Owls Head as “Owls Head Provincial Park”.

So, it is clear our government misled us, lied even.

The fundamental defect in the applicants’ position, however, is that there is no recognized common law duty of procedural fairness owed by the Crown to the public at large… Neither the Province’s previous misrepresentations about Owls Head, nor its history of public consultation in relation to parks and protected areas, entitles the applicants to be consulted before decisions are made about the protection or sale of Owls Head Crown lands.

We should be consulted. We need laws that require governments to consult, perhaps one that demands they don’t lie.

Which brings us back to this election campaign and what our party leaders have been saying about this issue.

Earlier this month, when The Coast asked Premier Iain Rankin — who was minister of lands and forests at the time of the decision and defended the sale at the time — the current Liberal position on Owls Head…

… Rankin’s press secretary did not reply to The Coast.

When pressed on Owls Head by [NDP Leader] Burrill at a CBC debate on July 28, Rankin responded that he was “looking out for all Nova Scotians,” and had acted for the benefit of people from Little Harbour. He also said a public engagement plan and Mi’kmaq consultation are in the works.

In an announcement on August 3, Rankin revealed the Liberal environmental platform, which does not mention the park. The platform includes a goal to protect 17 percent of the province’s land from development (up from a current 14 percent), though with no there’s no indication Owls Head will be part of this newly protected land.

The other party leaders were more forthcoming:

Tim Houston’s Progressive Conservatives have also been outspoken about Owls Head, with Houston condemning Rankin for acting “behind closed doors” at the February 2020 rally. Though the PCs have no definitive promises to stop the sale altogether if elected, a press release published by the Save Owls Head group says “a PC government would put an immediate pause on the sale of Owls Head pending public consultations and environmental reviews.”

New Democratic Party leader Gary Burrill and many NDP candidates have shown their support for Owls Head, with Burrill publicly calling Rankin’s decision to delist the park into question since before the election was called. At a February 2020 protest, Burrill announced the NDP’s plan to pass legislation called the Owls Head Act, which would strengthen protection for parks and protected areas. [His private member’s bill was introduced on February 26, 2020, but never received second reading.]

In a section about investing in rural and regional economic development, the NDP’s 2021 provincial platform says the following: “The NDP would protect the remaining areas of the Parks and Protected Areas Plan, including Owls Head, and consult with the public and Mi’kmaw communities about new areas.”

While there will be other opportunities to challenge the government’s position in the courts if and when the sale proceeds, the blunt reality is that if we hand the Liberals a third majority — likely for reasons that have nothing to do with Owls Head — that sale will move forward and citizens will be forced to fight a rearguard action to even be heard.

The best hope for Owls Head is almost certainly a minority government in which the NDP holds the balance of power and has some leverage to insist not only on the passage of its Owls Head Act but also perhaps broader legislation that will clarify the duty of future governments to consult with its voters and not mislead them.

If that does happen, of course, it won’t be because the majority of voters chose the “proper recourse” of the ballot box to express their opinion on this single issue. It will have been a fortuitous accident.

Is that the best way for democracy to operate?