You are here: Home / Featured / Election 2021: Party leaders lay out their priorities

Nova Scotians will go to the polls on August 17 to elect a new government.

The only secret about the election was its official date. Over the previous six weeks, the Rankin Liberals spent more than $300 million on promises that included a fleet of electric buses, $10 per day childcare, multi-use recreational trails for many communities, and upgrades for nursing homes, firehalls, and hockey arenas.

The campaign’s length will be the minimum allowable by law — just 30 days — and the political party that has been in power for the last 7.5 years is betting citizens will be too busy enjoying barbecues and family visits after 18 months of COVID-imposed separation to pay much attention. 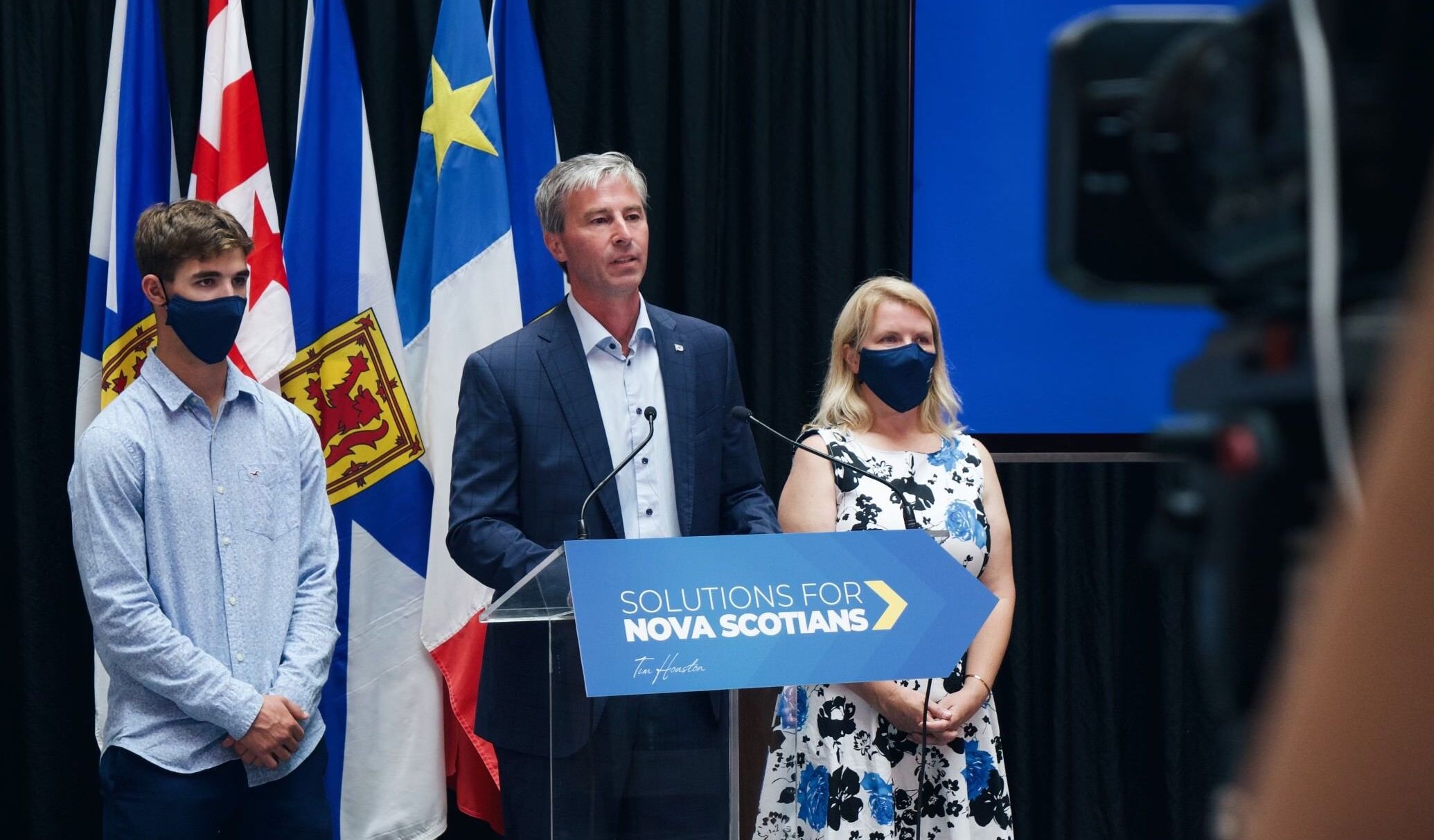 During a rally live-streamed on Facebook a few hours after the election was called Saturday, Progressive Conservative leader Tim Houston told supporters, “Fixing health care and creating jobs are the biggest challenges ahead of us. Iain Rankin spent the last three weeks trying to buy your vote. He’s not up to the job. It’s not bad luck but weak leadership that has created overcrowded Emergency departments. We can get a pizza faster than an ambulance in many parts of this province.”

As Tim Houston’s speech indicated on Saturday, get used to hearing the word “solutions” from the Tories. The PC slogan is “Solutions for Nova Scotians,” and the 51-year-old leader touts his background as a chartered accountant when he talks about spending hundreds of millions of dollars to hire 2,000 additional people for long-term care and creating 2,500 new beds for frail elderly people. 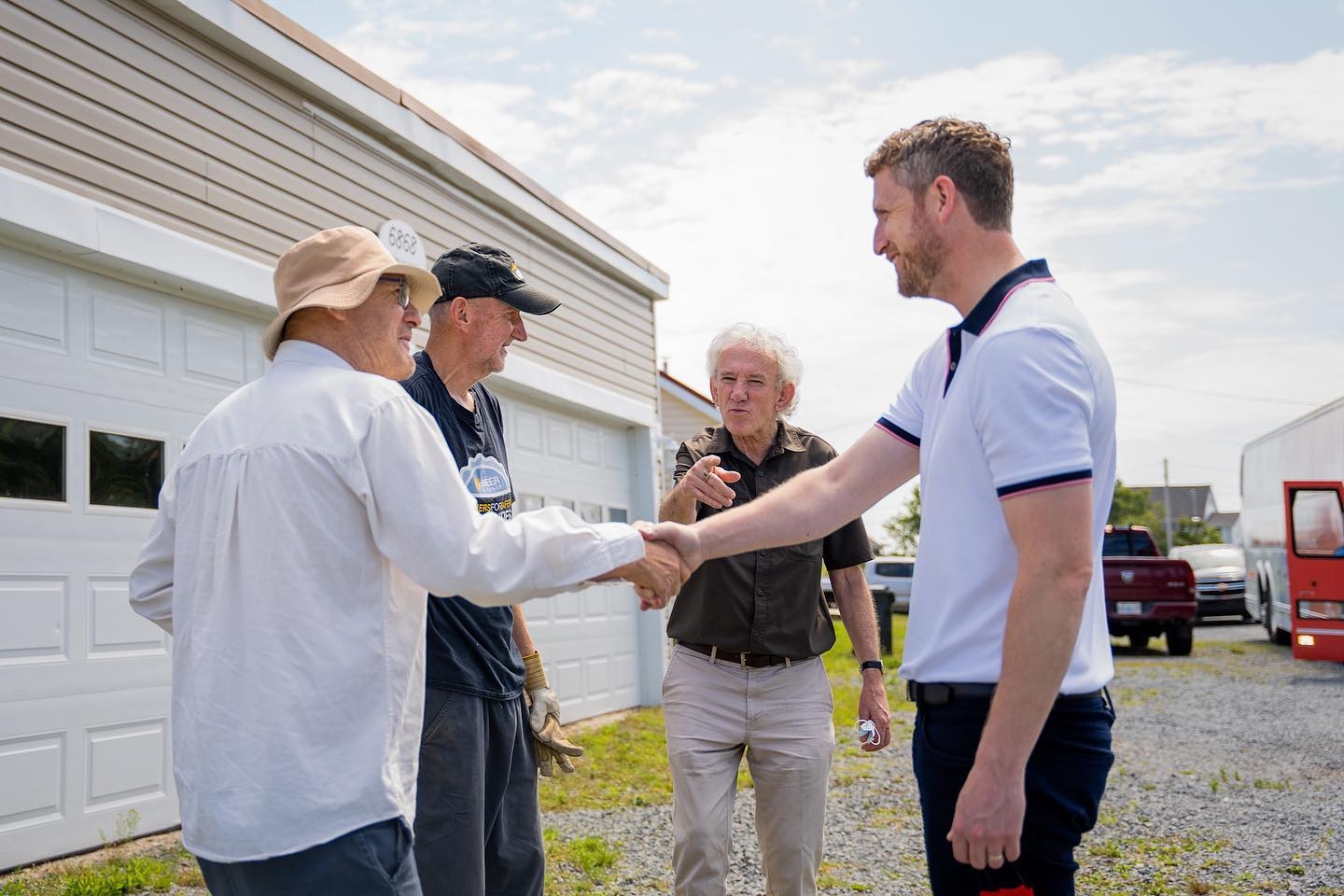 The Liberal team has a fresh-faced new leader elected five months ago. Iain Rankin came out of the gate promising to tackle climate change by moving Nova Scotia off coal in 2030 (10 years sooner than Premier McNeil and Nova Scotia Power had planned) and who has just authorized a Request For Proposals to fast-track the addition of more wind, solar, and renewable energy to the grid.

The Liberal slogan appears to be “This is Your Time, Nova Scotia” and the cheerleading message on the Party website goes like this:

“We brought in once-in-a-generation childcare. We’re increasing access to affordable housing, rejuvenating our long-term care sector, and building state-of-the-art health facilities. Our economy is preparing Nova Scotia – and Nova Scotians – for the jobs of tomorrow.  Nova Scotia is ready for a new era – this is our time.”

The 38-year old Rankin may be the closest thing to a Green Premier Nova Scotians have seen to date, but he could also be hobbled by his support for the proposed Goldboro natural gas plant (which now seems aborted) and by some past decisions he made during his stint as Environment minister, when he allowed the Owl’s Head provincial park to be de-listed as a protected place and open for business as a golf course development on the Eastern Shore (Did you know he has a diploma in golf club management?).

Rankin was also at the cabinet table when — after hydro from Muskrat Falls was delayed — the McNeil government gave NS Power the green light (an ambiguous phrase in this case) to burn more biomass for the next two years. And how about the glacial progress on recommendations from the Lahey Report tabled three years ago during Rankin’s tenure as the Minister of Lands and Forestry?

The Liberals could be vulnerable in eight ridings that used to be held by the former premier and cabinet ministers who are not re-offering this time.

Two are of note. In Halifax-Armdale, Lena Metlege Diab is gone. In Colchester North, where former Finance Minister Karen Casey had a lock on the riding (first as a Progressive Conservative and later as a card-carrying Liberal), the PCs are running Tom Taggart, a municipal councillor from the Bass River- Portapique area whose name became known for his frequent comments following the mass murders of last year.

There will be no online voting but voters can request a mail-in ballot from Elections Nova Scotia if they want to avoid crowds voting in person. At the current rate of vaccination, Election Day is likely to arrive before 75% of Nova Scotians have received their second shot. That’s based on the slower uptake, or “vaccine hesitancy” Public Health is seeing this month – despite the opening of walk-in vaccination clinics where no appointment is required. 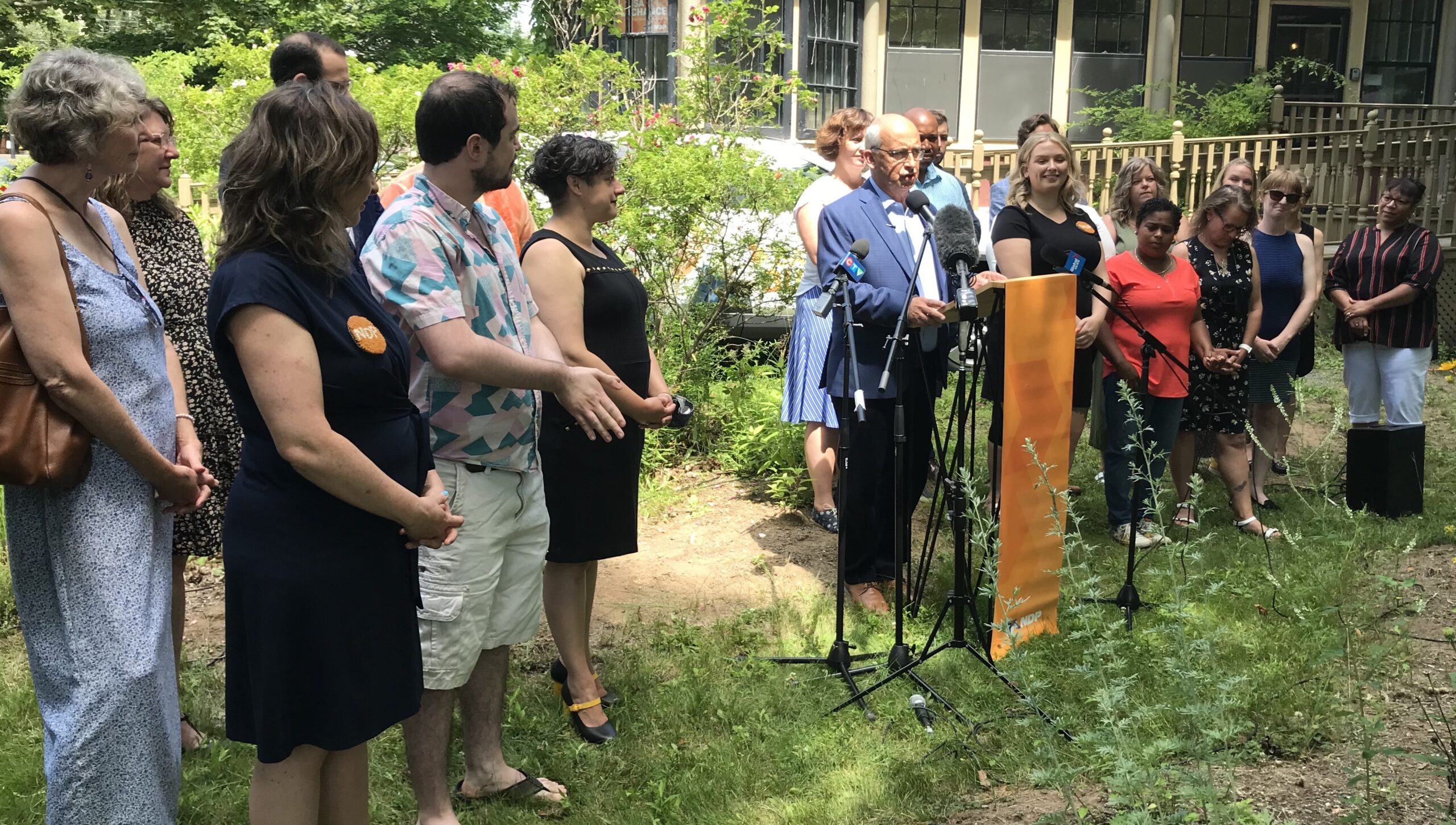 NDP leader Gary Burrill with some of the NDP candidates at the Womens Council House, July 18, 2021. Photo: Jennifer Henderson

On Sunday, Day 2 of the official election campaign, the NDP issued a road map or high-level plan of what the party intends to do should it form the next government. Specific commitments will be costed out and released within the next two weeks.

NDP leader Gary Burrill said a motion to make $15 the minimum wage for workers in Nova Scotia would be passed within the first month of being elected. Another motion — to continue rent control beyond the current State of Emergency — would be passed within two months, according to Burrill. And an NDP government promises to initiate a review or study of which aspects or segments of Nova Scotia Power’s business monopoly might be returned to public ownership.

“Our vision will change and improve the real lives of real people,” said the 65-year-old Burrill, a former United Church minister. “Real needs: we are talking about things like permanent rent control so people will be able to save toward a down payment. Real needs: like same day/next day walk-in mental health clinics so support won’t be available only to people with private health insurance. We are talking about the practical. Like a $15 minimum wage so the purchasing power of Nova Scotians can be strengthened.”

The NDP slogan is “Something Better for Nova Scotia.” The party can also claim the greatest diversity of candidates ever. More than half — 28 out of 52 — are women or gender-diverse. Burrill said the NDP team include five persons with disabilities, seven candidates who identify as LGBTQ, and five who are visible minorities or racialized.

Premier Iain Rankin and his wife Mary Chisholm are expecting their first child in November.

In the riding of Preston, two candidates have “Simmonds” as their family name. The NDP candidate is Colter Simmonds and the Liberal candidate is Angela Simmonds, a lawyer and community activist who convinced the McNeil government to establish a process to provide clear title to property owners in the Prestons in order to obtain a mortgage or sell their land.

The Progressive Conservatives have eight candidates who are health care professionals, including nurses, a physiotherapist, a paramedic, and a dentist.

The Liberal candidate for Dartmouth South, Robyn Ingraham, resigned her candidacy on the first day of the campaign citing her anxiety related to some modelling photos.

Gary Burrill has two adult children who play in the popular band Hillsburn.