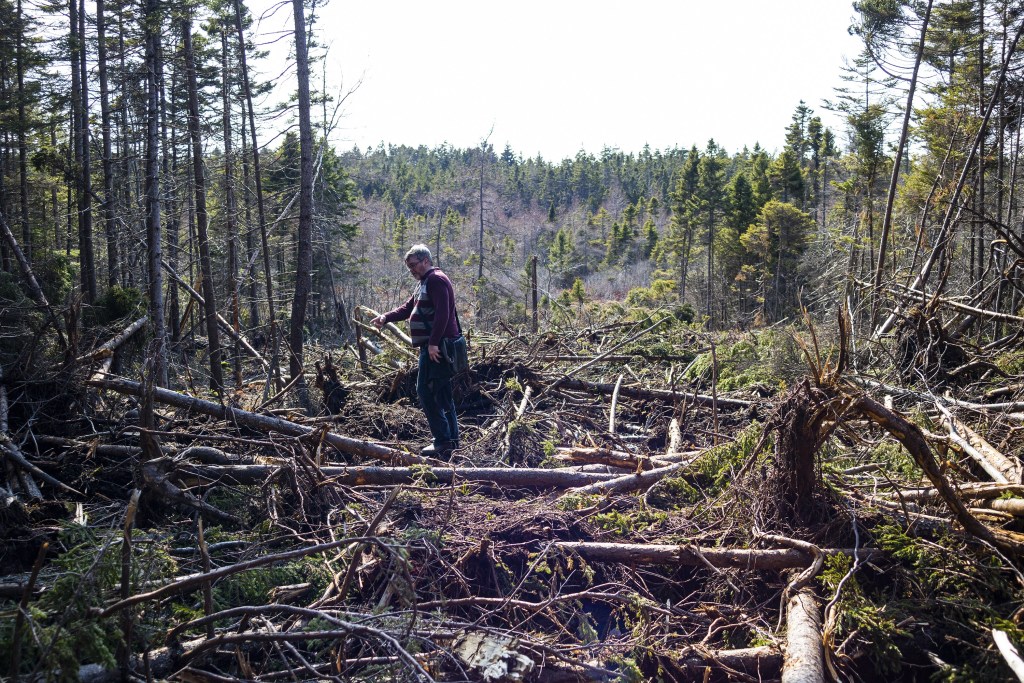 Bill Zebedee of the Save Our Southdale Wetland Society walks over cut down trees on Clayton Developments’ property near the Eisner Cove wetland in March 2022. — Photo: Zane Woodford

The provincial government has approved early tree clearing at one of its “special planning areas” in Dartmouth, but a group of local residents believes it’s found a threatened species of tree in the area.

On Friday, Halifax Regional Municipality notified residents, in the Chronicle Herald and online, that Municipal Affairs and Housing Minister John Lohr has approved a request from Clayton Developments and A.J. Legrow Holdings to “enable early tree removal and earthworks” at what the government calls the “Southdale – Mount Hope Special Planning Area.”

The two developers want to build a total of 1.200 units on the site in apartment buildings, townhouses, and single-family homes, along with a full road network. The province lists the project as “Shovel ready for Fall 2022,” and while it hasn’t been approved yet, the developers now have a green light to clear the land.

The Executive Panel on Housing in the Halifax Regional Municipality, the province’s housing task force, recommended in favour of the application on June 30. Lohr approved bylaw amendments that day, and then a development agreement on July 4.

While the province calls it the Southdale – Mount Hope Special Planning Area, locals call it the Eisner Cove Wetland. In a news release on Friday, they called for “for the immediate cessation of Clayton Developments’ activities” citing the presence of Black Ash trees:

Since January supporters have been scouring the forest belt around Eisner Cove Wetland in what is known as a BioBlitz in hopes to find threatened or endangered species to save the eco-sensitive area. With only 1,000 living trees known to exist in Nova Scotia, the Black Ash is officially a [threatened] Species at Risk.

“I was part of a BioBlitz at Eisner Cove Wetland in January,” said Jon Stone, former manager with the Canadian Wildlife Service.  “That was when I found what iNaturalist identified as a Black Ash.  As a former Wildlife Officer I knew what I had found.”

Since that time, the Save Our Southdale Wetland Society has consulted experts, arborists and an environmental educator before releasing  information about their potential find.

On May 9, 2022, an environmental consultant and educator indicated there “is a high probability of black ash being on site, but further research is required when leaves come out, because there also appear to be hybrid trees, so there will probably be a black ash found deeper in the woods.”

Bill Zebedee with Save Our Southdale Wetland Society/Protect Eisner Cove Wetland said the potential presence of the trees was missing from a “Land Suitability Analysis” (LSA) tabled with HRM in January. Zebedee said the Atlantic Canada Conservation Data Centre identified wood turtles on the property, also a species at risk, and they were missing from the LSA, too.

“It’s time for a proper Environmental Impact Assessment at the Eisner Cove Wetland,” Zebedee said in the news release, “before any further damage can be done to this ecologically significant site. What else in the wetland is being forgotten or ignored in favour of this development?”

Elizabeth MacDonald, spokesperson for the Department of Environment and Climate Change, said in an email that the department looked only at the wetland area of the site.

“For this specific development, the developer requested a wetland alteration approval from the Nova Scotia Department of Environment and Climate Change. This was approved and no evidence of Black Ash, Wood Turtles or any other endangered species was found in the wetland area which was the subject/scope of our approval,” MacDonald wrote.

“This development did not meet the criteria set out in the Nova Scotia Environment Act to trigger the requirement for an environmental assessment which is an alteration of more than two hectares of wetland.”

MacDonald said anyone with “evidence of harm being done to an endangered species” outside the wetland area should report it to the Nova Scotia Department of Natural Resources and Renewables. Zebedee said he’s done that.