You are here: Home / Commentary / Donald Trump, Stephen McNeil, and democracy in decline 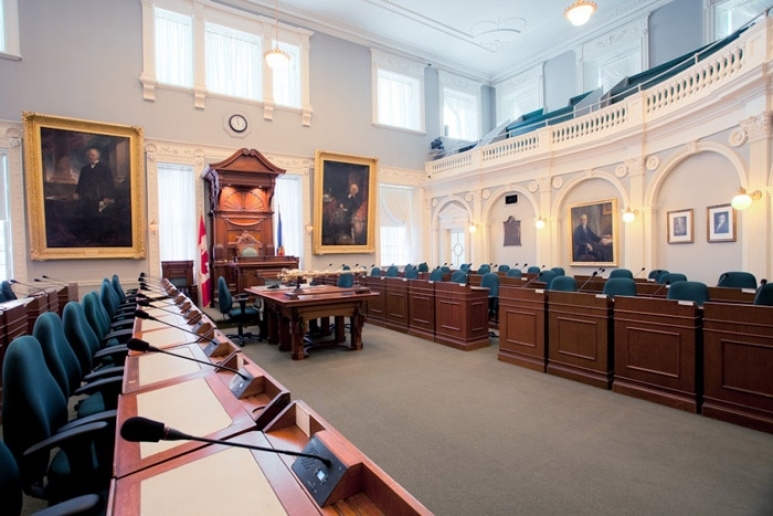 If you want to know just how quickly a flawed but functioning democracy can descend into anti-democratic demagoguery, may I direct your attention south of our border. Yes, there.

If you want to know — and even if you don’t — how close to (or far from) that less than ideal we already are in Nova Scotia, may I direct your attention to the proceedings of the Second Session of the 63rd Assembly of our own House of Assembly on Friday, December 18.

Oops, sorry. You must have blinked and missed it.

I know, I know. Donald Trump is — hopefully was — a one off, a grab-’em-by-the-genitals reality TV star/real estate failure/bankrupt casino mogul/pretend billionaire/right-wing faux populist, in-it-only-for-himself grifter whose influence will fade faster than his fake tan in a post-White House prison of his own making.

So, what could the rise of such a figure in another country possibly have to say to us in Nova Scotia?

Well, start with this. Donald Trump didn’t emerge from nowhere. He was able to game the political system to his own advantage because it was ripe for the plucking. In part, that’s because, long before Trump arrived on the scene, America’s democracy was already distorted far beyond civics-class recognition. In part, it’s also because too many people who knew better were happy to abandon whatever modest principles they might have possessed in order to ride his soiled coattails for their own electoral and ideological benefit. And, in too large part, Trump was also able to get away with it because too many Americans looked the other way while their democracy disappeared.

But Friday’s session wasn’t to discuss public business or hold ministers accountable; it was simply to fulfill a legal obligation under a 1994 law that says the legislature must hold spring and fall sessions, after which McNeill immediately shuttered its doors before members could do anything worth doing.

Lieutenant-Governor Arthur LeBlanc uttered a few government-scripted phrases of governmental self-praise. Premier Stephen McNeil offered fewer than 100 meaningless words. And then it was over. The session had lasted all of 17 minutes, which was about 17 minutes longer than the premier himself would have preferred.

In fact, what Stephen McNeil preferred — and what he had asked the opposition parties to agree to — was that no one except himself and the lieutenant governor be even physically present in the legislature for the Friday session.

Unsurprisingly, the NDP said no.

The premier immediately jumped off the demagogic deep end. “They want to go to the legislature,” he thundered, his voice rising as if that was a crime.

“There’s no debate; it’s being prorogued,” he added, as if the opposition had had any say in that decision.

“The lieutenant governor will come in, putting his health at risk and those of other members,” he continued as if that was his real concern.

In their letter turning down the premier’s request, the NDP apparently had the temerity to compare the work of elected officials to healthcare workers who continued to function during the pandemic.

“Think about that for a minute,” McNeil harrumphed. “They’re comparing the work they do to nurses. How many nurses can virtually give you the vaccine?” Huh? How about this question instead? How many nurses have the very real — and also vital — job of holding a government to account on behalf of its citizens?

Besides, healthcare workers are far from the only Nova Scotia public servants working through this pandemic. Teachers? They’ve been on the often physically un-distanced front lines of the province’s classrooms for months, dispatched there by McNeil’s government decree, putting their health at risk.

Woah! Wait a minute. Who suggested legislative committees couldn’t meet virtually? Oh, right, Stephen McNeil did, until he finally changed his mind and allowed a few committees to meet via Zoom, but then used his government’s bully-boy majority to make sure those committees couldn’t do anything he didn’t want them to.

Of Friday’s prorogation session, McNeil prattled on: “They could do the legislature [virtually].”

The legislature, in fact, could have/should have been meeting for much of the past nine months using protocols previously agreed upon by all parties for safe combination in-person/virtual sessions.

“Our feedback,” explained NDP leader Gary Burrill of his letter to McNeil, “was that the system we spent many weeks and months devising together with [the Liberals] and the Conservatives, in our judgment, would be a better way” to conduct public business than the premier’s preferred Friday party of one.

There was/is plenty for MLAs to discuss. During the last nine-and-a-half months of an unprecedented global pandemic, for example, Nova Scotians have endured economic devastation, the worst mass shooting in modern Canadian history, a deadly coronavirus outbreak at the province’s largest nursing home, and more. Much more. Consider just this. On Thursday, the day before the legislature met for 17 minutes for no good reason, we learned — thanks to questions from reporters rather than in an official Question Period with MLAs — that Nova Scotia taxpayers are still on the hook for another $16.3 million this fiscal year to continue to prop up the operators of a Yarmouth-Maine ferry that hasn’t sailed in two years and fulfill the government’s sweetheart contract with the operator that it refuses to make public.

Worth discussing? Not according to Stephen McNeil.

But does any of this really matter? Stephen McNeil is on his way out the door.

Our undemocratic first-past-the-post electoral system allowed McNeil to play the undisputed king of all he surveyed in the first place. In the last election, the difference between a Liberal minority — which might have forced McNeil to be accountable to MLAs as well as the rest of us — and his who-cares majority was just a few hundred votes concentrated in a few ridings. The skewed outcome meant that, with just under 40% support among voters, Stephen McNeil was able to act as if he owned the province.

That flawed system needs to be re-thought.

McNeil, of course, is far from the first premier to consider the legislature and legislative committees a nuisance and MLAs, to borrow a phrase from Pierre Trudeau, “nobodies.” Or to conflate his political interest with the public interest.

But Stephen McNeil has, without question, raised the level of disdain for democratic norms to high art, and lowered the bar for his successors to chip away even more at the body politic.

It’s worth asking the three contenders for Stephen McNeil’s job — Iain Rankin, Labi Kousoulis, and Randy Delorey — if they agree with their former boss’s anti-democratic approach to governance.

And what they would do differently.