A Halifax physician who has worked on the frontlines of previous epidemics around the world says the province is doing an exemplary job navigating COVID-19.

But he also issued a stern warning that public cooperation is key to keeping us all safe, and failure to do so could have devastating results.

“For me personally, and I’m talking from a disaster management perspective not as somebody who’s living here, I think Nova Scotia is probably a gold standard,” Dr. Sundeep Chohan said in an interview Thursday.

“I think here for once we are right at the forefront.” 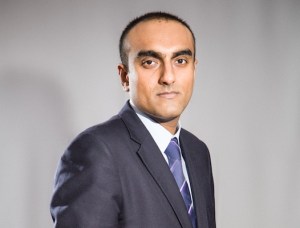 Chohan moved to Halifax from the UK about 18 months ago. He has specialist training in disaster medicine and almost 13 years of experience working on the frontlines in regions affected by conflict, catastrophe, and epidemics.

“I think the province has intervened at exactly the right time and I think they’ve done it in a way that hasn’t provoked fear but in a way that is strong enough to send a message across to the population to take these things seriously,” Chohan said.

“Even though numbers are low, and numbers in the hospital are low at the moment, there’s that potential for it to go exponential very quickly.”

Chohan points to the well known South Korean case of “Patient 31” in which one woman was found to be the cause of a cluster of more than 5,000 cases of COVID-19. Reuters shared a particularly useful piece that includes a graphic highlighting how rapidly exponential spread can occur.

“That whole cluster was related to this one person, and I think that’s the power of exponential growth and this is why social distancing works and this is why I think this province has done a brilliant job across the board,” he said.

“As a physician you can only work in the environment that you have, and if that environment is obstructive or is not conducive to good practice then you’re fighting a losing battle. As physicians we could implement all the changes we want in this clinic, but if the province hadn’t taken action it would be just a leaky bucket.”

Chohan is a family doctor at Family Practice Associates in Halifax, where he was recently appointed the COVID-19 clinic lead.

The practice has a roster of 55,000 patients, and Chohan said keeping them under the care of their family doctors and out of emergency departments is crucial.

“Almost 60,000 patients, that has the potential to tip the balance away from being able to cope in terms of secondary resources,” he said.

That’s why the clinic has implemented strict measures to help ensure the safety of physicians, staff, and patients.

“I’ve worked in epidemics and I’ve learned things in terms of modelling. I closely follow literature and I follow intelligence reports coming out in a lot more detail, so for this I was certainly planning way before,” he said.

“Before we had our first (COVID) case, we already had our general meeting at this practice and we had forward-planned…I’ve had us implement gold standard guidelines.”

Those guidelines are evident as soon as you walk into the building that houses the practice of 18 family physicians. Whether you take the elevator or the stairs to the second floor where the clinic is housed, there’s no avoiding the COVID-19 safety message affixed in the middle of the foyer on the first floor.

It advises patients that everyone visiting the clinic will be pre-screened, noting that those “who do not engage and provide honest answers will be considered a risk and ask (sic) to leave the clinic.” 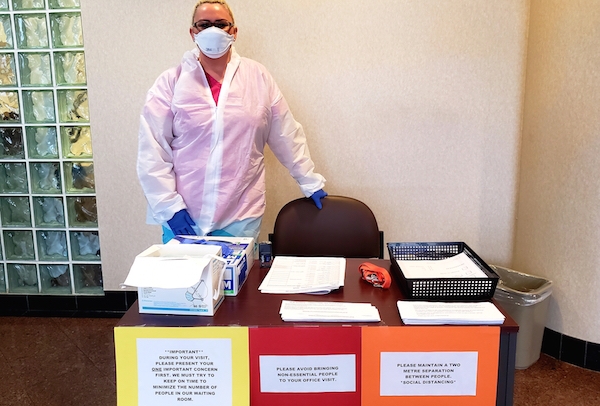 Climbing the stairs and arriving on the second floor, you’re immediately confronted by a table with several notices affixed to it. A box of gloves and masks are set to one side, presided over by two gloved, masked and gowned staff members who greet you from the required distance and ask the usual questions about travel and if you feel unwell.

I was asked by one of them to move my bangs off to the side so that a remote thermometer beaming towards my forehead from a distance could get an accurate reading.

“98.1. You’re fine,” she happily exclaimed, outstretched arms handing over a mask and gloves before disappearing inside the clinic to find Chohan.

A row of chairs is set up in front of the only door into the clinic, making it impossible to emerge from the elevators or the top of the staircase and head straight into the clinic.

As I was quickly whisked into an examining room, I noted the waiting area that would normally be filled with as many as 200 patients on a typical afternoon was eerily silent and empty.

“Today we’ve had 30 (in the office) total so far. That’s it. The numbers have dramatically changed and it’s not just telemedicine. It’s telephone calls, patient messaging, working with pharmacists, making sure scripts get refilled,” Chohan said, speaking from behind his mask.

“The thing is normal medicine carries on. That doesn’t suddenly stop because COVID’s here, which is why it’s important for primary care and secondary care to be working together.”

In the last two weeks, Chohan has had two patients receive new cancer diagnoses. There are prenatal and baby checks that need to be done, and a host of other medical issues that require the oversight of a family practitioner. He doesn’t want patients to ignore that breast lump or those chest pains.

“Imagine we had the scenario where we didn’t prepare and we weren’t well planned and we had almost 60,000 people without medical care. Where are they going to go? To ER,” he said.

“So these patients that it’s our responsibility to be looking after are now pouring into ER which means ER cannot cope with the COVID cases.”

Unsurprisingly, in the last two weeks there has been what Chohan called “a huge jump” in the number of patients struggling with mental health issues.

“The numbers of people coming in with mental health concerns, anxiety, relapses of PTSD, relapses of OCD, all are through the roof now. This is why I am saying it is important for us to maintain contact with people and to continue delivering primary care,” he said.

“That’s why this place needs to stay open. If you look at what’s happening in other places, there has been a spike in suicides unfortunately. As family physicians we need to be there for our patients.”

Chohan said dealing with this pandemic requires not only flattening the curve, but increasing medical capacity. This is another thing he believes the province has done well.

“Everybody has rallied around and we have raised that line quite a lot. Doctors are being redeployed to areas they aren’t familiar with, resources have gone through the roof, we’re working differently,” he said.

In fact, Chohan suggested this has ushered in a new kind of medicine, one that is in many ways more personal, efficient, and likely to continue throughout the province when we finally emerge from this pandemic.

“We’ve got telemedicine going on, the on-call systems are changing. Doctors are working more collaboratively, physicians are coming out of retirement,” he said. “We’ve raised the line a huge amount.”

Chohan said it’s important to emphasize there’s no way to know how this virus will impact any of us if we happen to contract it. Those who’ve died include babies, teenagers, young adults, seniors and people with no comorbidities.

“Prevention is the only cure,” he said.

“If somebody gets it, it is impossible to predict what their outcome is going to be. We can support people from a medical aspect but there is actually no cure for this.”

Chohan echoed the words of public health officials who repeat warnings about the need to flatten the curve. He repeatedly stressed that the actions and/or inactions of the community at large that will determine how Nova Scotia weathers this pandemic.

“The truth is actually nobody knows what is going to happen over the next three to six weeks,” he said. “What may well happen is we don’t get that big surge and that’s because we took all the measures to stop that from happening.”

“It’s you guys that are the frontline because essentially there’s only a certain amount of resources that we have, and if that number keeps on rising then we’re going to be overwhelmed,” he said.

This, he repeated, is why flattening the curve is our best hope.

“It won’t take much to put this province on its back if people do not continue to comply, and I think it’s disrespectful to the thousands of people that are out of work at the moment and the hundreds of businesses that have closed if people don’t comply,” he said.

“This is not life as normal. Everybody has to make a sacrifice. You’re doing this for your community now. Hold. That. Line. This is a community effort. This is more than medicine. This is about working together.”