You are here: Home / Environment / Despite warnings that burning biomass does not address climate change, Nova Scotia Power burned more biomass in 2018 than in 2017 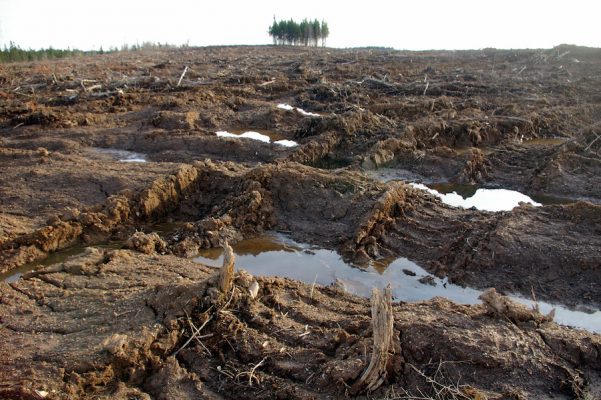 Citizens concerned about the amount of wood harvested (mostly clearcut) to be used as biomass aren’t going to be happy with the numbers contained in the 2018 Fuel Adjustment Mechanism (FAM) report filed last month with the regulator.

When used for generating electricity, the efficiency of biomass is only 21-23% efficient.

Last year, the biomass boiler owned by Nova Scotia Power (NSP), which generates electricity for the provincial grid — as well as steam for the co-generation plant that reduces power costs for Port Hawkesbury Paper — burned more wood and ran at higher capacity than in 2017.

This annual report to the Utilities and Review Board (UARB) from NSP compares the estimated base fuel costs for each year with what the actual costs turned out to be 12 months later. Variances from the estimates accumulate in something called the Fuel Adjustment Mechanism (FAM) deferral account.

Last month’s report reveals that in 2018, the biomass boiler located on Port Hawkesbury Paper property generated 188.8 GWh (gigawatt hours), compared to 152.6 GWh in 2017 — a 24 % increase. The boiler also ran at 50% capacity compared to 40% the previous year. Expressed in another way, the generating unit ran flat out for six months or at half-speed for 12 months.

The bill for buying biomass increased from $5.9 million to $8.4 million. Most of the fuel — 65% — came from sawmilling waste such as woodchips, bark, and sawdust. Low-grade wood accounted for 35% of what was burned in the boiler. It does not appear that any biomass was imported, as occurred several years ago.

The biomass boiler began operating in 2013 in order to provide discounted electricity which was demanded by the new buyer of the shuttered NewPage paper mill in Port Hawkesbury and to supply “renewable” or green energy to Nova Scotia Power to meet newly established quotas to help move away from coal. There was some, but limited, public discussion at the time about whether using low grade wood (primary biomass) to generate electricity was truly “green,” but the consensus was it was better than burning more coal.

Since then, a growing body of scientific studies suggest that while trees may be considered a renewable resource over the long term (40-70 years), the accelerating pace of global warming which was flagged in the latest report from the International Panel on Climate Change warns that’s too long a wait for reforestation.

Forests are critical to retaining carbon in the ground rather than releasing it into the atmosphere. The IPCC report warns that what happens over the next 20 to 30 years will determine whether the rate of global warming can be slowed to prevent more frequent, more violent storms, desertification, wildfires, and the human migrations linked to these effects of climate change.

Yesterday, The Toronto Star published a story about a new report from Environment Canada and Climate Change that states that over the last 50 years, temperatures here in Canada have risen even higher (1.7 degrees Celsius) than the world average.

Because there is less time than previously thought, groups such as the Sierra Club, the Healthy Forest Coalition, and Ecology Action Centre have been urging the Nova Scotia government to rethink its definition of biomass as a “renewable resource” and to stop using it to generate electricity because of the potential long-term consequences.

Given the heated debate, why does Nova Scotia Power continue to rely on woody biomass to produce electricity when it could substitute other fuels or import electricity from New Brunswick and Newfoundland?

In a nutshell, burning wood is cheaper than buying coal, petroleum coke, and natural gas. And current provincial legislation directs NS Power to do that in order to insulate citizens from the shock of paying more for power when other fuel prices rise. Here’s the justification provided by NSP senior communications advisor David Rodenhiser:

Biomass is designated as a renewable energy source under the Nova Scotia Renewable Electricity Regulations. Those regulations also state: “NSPI must maintain the Port Hawkesbury biomass power generation plant available as a base load cogeneration facility and NSPI must operate the plant on an economic dispatch basis or as required for system reliability.” The “economic dispatch” designation means NS Power operates the plant when doing so is the most economic choice for customers. The reference to “system reliability” recognizes that the biomass plant provides valuable back-up and balance to intermittent wind generation.

From 2017 to 2018, the net fuel bill rose 25% — from $422.1 million to $563 million. Rodenhiser lists a combination of factors for that jump, including “costs related to renewables, weather-related load increase, higher natural gas prices, and a weaker Canadian dollar.” Fuels used most widely at most power plants in Cape Breton and at Tufts Cove in Dartmouth saw significant rises: the bill for coal and petroleum coke rose 10%, while the bill for natural gas went up 30%.

Although the choice to burn more wood helped keep fuel costs $48 million below what NSP had forecast a year earlier, the biggest factor was less electricity than expected was transmitted via the subsea cable known as the Maritime Link connecting Cape Breton and Newfoundland-Labrador. Muskrat Falls has yet to come onstream. For ratepayers, the bottom line is this: no increase will appear on this year’s bill for the higher fuel costs rung up in 2018.

“Although there have been year-to-year increases in fuel costs, the rates that were set in 2016 for 2017, 2018 and 2019 forecast those increases, so there aren’t un-recovered fuels costs owed by customers to be trued-up,” explained Rodenhiser.

The key word there is “forecast.” Higher prices had been expected. Some consumers may recall receiving a “credit” on their bill back in 2017. That occurred because the power company had overestimated the amount it collected from ratepayers to cover projected fuel costs in 2016.

Until April of 2016, NSP was compelled by legislation to run the biomass boiler at Port Hawkesbury Paper every day, 24/7. In 2014, the amount of electricity produced for the grid peaked at 258 Gwh. The biomass bill was more than $24 million. A legislative stroke-of-the-pen in 2016 gave the utility new authority to run the boiler only when biomass made economic sense. It didn’t consider whether it made environmental sense.

“Changing the legislation from a must-run facility to economic dispatch provides more flexibility in the type of generation we can use,” said then-NSP spokesperson Bev Ware in April 2016. “For example, if biomass is not the cheapest option at a given time, we can choose to dispatch another source while still meeting the Renewable Energy Standards requirements. At times when other fuel prices are high, the biomass plant can reduce impacts related to volatile commodity markets.”

At the time the legislation changed in 2016, NSP also addressed concerns over how much forest was being clearcut to feed a 43 MW (megawatt) boiler to produce electricity. “The biomass plant accounted for 5.95% of primary harvesting in 2014,” said NSP spokesperson Ware in 2016. “This announcement will significantly reduce the amount of biomass being harvested for the plant.”

I don’t have updated figures for how much biomass of various types was harvested last year. But we do know that more electricity — from all fuels — was being produced five years ago than today. In 2014, the utility generated 9,845.3 GWh compared to 8,993.9 GWh in 2018. The decline suggests both a loss of manufacturing in the province as well as the success of energy conservation programs supported by Efficiency Nova Scotia.

In 2014, Ware said biomass was providing 2.8% of NSP’s electrical generation. In 2018, NSP used biomass to generate 2.1% of its total electricity, up slightly from 2.0% in 2017. It appears that fewer trees are being cut to feed the boiler at Port Hawkesbury today than five years ago and that the percentage of the fuel derived from bark and woodchips has increased while the percentage of fuelwood has come down.

One important variable missing from the debate over the future of biomass is the role of the 30 MW Brooklyn Energy plant in Queens County outside Liverpool. NSP’s parent company Emera Inc purchased the biomass plant after Bowater Mersey closed. Brooklyn Energy’s biomass plant has the capacity to produce half as much electricity as the Port Hawkesbury generating station. This is not a small amount, considering the fact that 50 tractor-trailer loads of wood used to pull into the Port Hawkesbury yard each day.

But even though Nova Scotia Power purchases electricity generated from this facility owned by its parent company, the amount of energy it generates from biomass seems to be protected under a cone of silence: the annual report which the regulator requires NSP to file concerning business conducted with its parent company and/or affiliates actually blacks out or redacts information about how much electricity Emera-owned Brooklyn Energy supplies Emera-owned NSP.

Nova Scotia Power tells the Halifax Examiner “the amount of energy purchased from an individual supplier is confidential business information.” A request to Emera asking for the total amount of energy in GWh the Brooklyn biomass plant generated in 2018 got the same fuzzy commercial confidentiality response. “The data you are requesting is commercially sensitive that is not disclosed publicly,” said Emera communications director Jeff Myrick, without explaining which business needed any protection from potential competitors.

A request to the Nova Scotia Department of Energy and Mines asking for the total amount of GWh of electricity produced in 2018 by Brooklyn Energy from biomass has so far not received a response.

Given that the planet’s temperature is forecast to rise 1.5 degrees over the next 15 years with costly consequences at home and abroad, the burning question is whether any tonnage of trees/wood waste is acceptable to be burned as fuel under the guise of keeping power rates in check for the electorate.