You are here: Home / Featured / Dear Mr. Premier: I know you’re busy but… 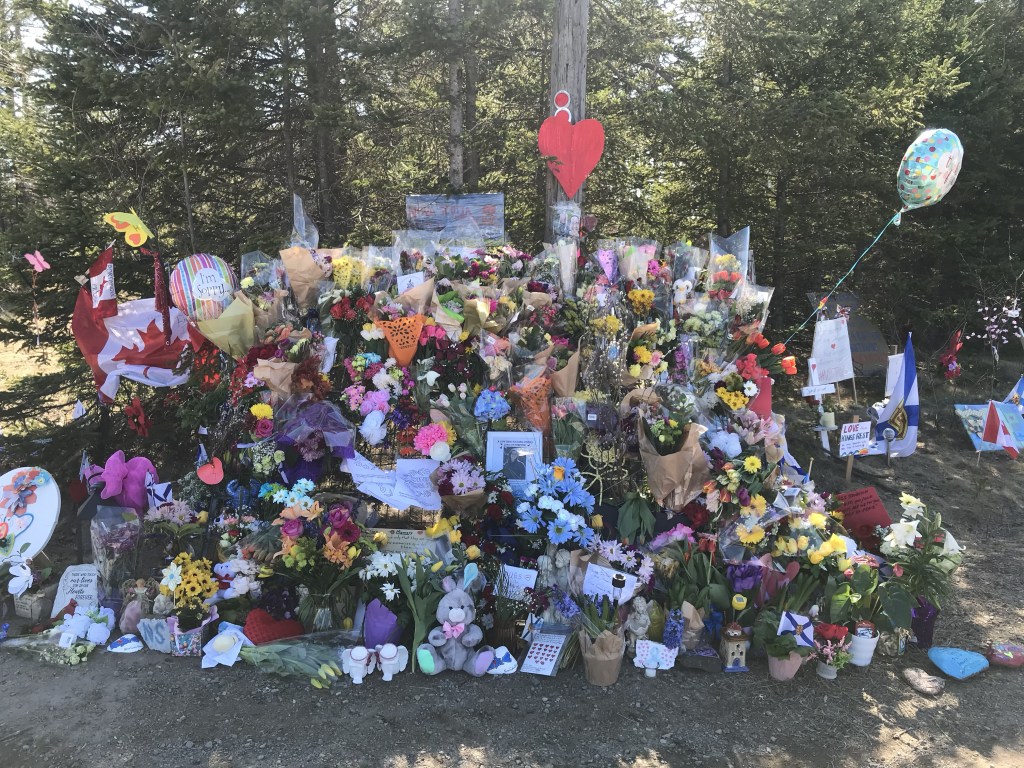 Roadside memorial in Portapique to the 22 victims of the mass shooting that began there. Photo: Joan Baxter

Such as government spending. I mean, what gives elected MLAs the right to hold online committee hearings to ask awkward questions about the latest auditor general’s report; or about the long-term crisis in our long-term care homes; or about the still secretive-to-them-and-us state of that massive, billion-dollar QEII redevelopment project; or about who’s-responsible-for-what changes to those new multi-million-dollar highway twinning contracts; or about why anyone in their right mind would want to keep shelling out more millions of our dollars to keep the Yarmouth-Bar Harbor ferry not running for another season?

The opposition parties claim it’s their duty to provide oversight of all the important work your government is doing.

But I don’t want to get off on that tangent…

I do want to say I agree completely with your spokesperson, Stephen Tobin. (I’m sure you were too busy to speak yourself, and he is a “Stephen” too, after all.) When all the Liberal members of the public accounts committee — I may have once, in a fit of pique, referred to them as the Fangless Five, but let’s not go there today —  voted, as one collective person, to shut down opposition requests for even an online meeting of the public accounts committee, a reporter from allnovascotia.com had the temerity to ask why. Your spokesperson, Tobin, emailed back with just the appropriate amount of dismissive disdain:

“The premier and his caucus are focused on the health and safety of Nova Scotians, as well as reopening our economy.”

So, as I said, I know you’re busy, which is why I thought perhaps I could help with another issue that’s cropped up and which you’ve probably been too busy to turn your full attention to.

It has to do with “the horrifying events in Portapique and elsewhere in central Nova Scotia on April 18 and 19, 2020,” and the growing demands — mine too, I confess — for you to call a public inquiry into what happened and why, and what can be done to prevent future tragedies.

Earlier this month, in fact, more than three-quarters of the faculty at the Dalhousie Law School — who, one guesses, know a thing or two about such things — sent you an open letter calling on you to establish an inquiry with “terms of reference that are broad enough to allow for…

Noted the law professors: “The process that your government sets in motion now must be robust enough to assure Nova Scotians that you are doing all that is in your power to ensure that this will never happen again… In a modern democracy committed to state accountability, an internal investigation will not suffice. Independence, impartiality and transparency are essential components of maintaining public confidence in the administration of justice. Only a public inquiry can satisfy these requirements.”

Rather than simply say thank you very much, we’ll consider it, goodbye, you decided to pit your appliance repair operator warranty-manual law schooling up against the combined wisdom of an entire law school.  In yet another emailed statement, this time to the CBC, you (or your spokesperson) declared such a public inquiry “can be called only into matters in which the province has constitutional jurisdiction.”

Perhaps you forgot to read your Constitution Act of 1867 or the cheat sheet in the Canadian Encyclopedia, which helpfully sets out specific areas of provincial jurisdiction, including:

… property and civil rights, the management and sale of provincially owned public lands, hospitals, municipal institutions, local works and undertakings, the incorporation of companies with provincial objectives, the solemnization of marriage and the administration of justice.

Oops. Must have missed that.

Anyway, rather than now plead nolo contendere and just get on with doing the right thing by simply announcing the inquiry, you attempted to dump the mess into the lap of your federal Liberal colleague, Prime Minister Justin Trudeau, saying you “will wait and see” what Ottawa decides to do.

But Trudeau, just as swiftly and un-deftly, dumped it back on you.

People have many questions about what happened in Nova Scotia, and we are encouraging the RCMP to do its work on the initial investigation, but as we move forward there will be of course larger questions to ask, and we will work with the government of Nova Scotia on getting those answers.

As I said, I know you’re busy with other matters, so I thought I’d help out by reminding you how another Nova Scotia government responded to an unanticipated mass tragedy. On Saturday morning, May 9, 1992, an explosion ricocheted through the underground tunnels of the Westray Mine in Pictou County, killing all 26 miners working the overnight shift.

Two days later, when the legislature resumed its session and even before MLAs had marked a minute of silence in tribute, then Tory premier Donald Cameron — a politician who had actively supported the mine’s development — stood up in the legislature and declared:

A judge from the Nova Scotia court will soon be appointed to chair an independent public inquiry into the disaster at the Westray mine. This judge will have all the powers of the inquiries commissioner under the Public Inquiries Act and the Coal Mines Regulation Act. The commissioner will seek and hire expertise as he or she deems necessary.

Today, I am announcing the appointment of the Honourable K. Peter Richard of the Nova Scotia Supreme Court Trial Division as Inquiry Commissioner… It is essential that Nova Scotians know all the answers to the questions surrounding and leading to this tragic event. Mr. Justice Richard’s inquiry will not be limited to the events of the early morning of May 9th. Nothing and no person with any light to shed on this tragedy will escape the scrutiny of this inquiry. The commissioner will be able to seek and hire expert, independent advice as he deems necessary. He will have all the powers to subpoena witnesses if necessary. The inquiry will proceed with the full cooperation of the Government of Nova Scotia, its departments, agencies and commissions. The commissioner’s report will be made public. Mr. Speaker, the answers to many questions leading to the terrible events of May 9th can only be obtained through an independent, thorough and all-encompassing investigation… We owe this to those died, to their families and to all Nova Scotians who were touched by this tragedy.

All you — or your spokesperson — really needs to do is to crib Cameron’s words to show how much your government cares about getting to the truth of Portapique and to make sure such a tragedy never happens again. You’d be a month late, but better late than never.

If you’re worried about how to craft the specific terms of reference to make sure everything of significance gets properly examined — I am thinking here of the role of domestic violence in particular — you could certainly start with the general term suggested by the law professors’ letter. And then add in more specific terms, as needed. If you’re still worried you might miss something, I have one more suggestion for a concluding term of reference. The inquiry should…

make recommendations to the Governor in Council respecting… such other related matters which the Commissioners consider relevant to the Inquiry.

Those words come from the Order-in-Council appointment of three judges to look into the wrongful conviction and imprisonment of Donald Marshall, Jr. Its 1989 report, which used that last term of reference to expose systemic racism and unequal treatment in the province’s justice system, sparked a whole series of important reforms.

Perhaps this inquiry could do the same.

Like I said, I know you’re busy. So, I wanted to help.