You are here: Home / Education / Dalhousie University is preparing to raise tuition, again 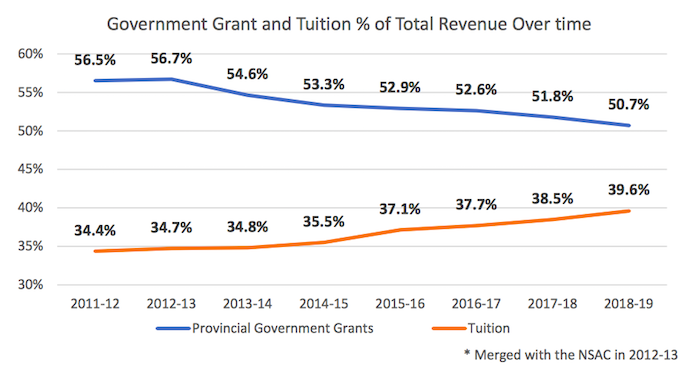 For the seventh year in a row, Dalhousie University plans to raise the tuition fees it charges students. The three per cent increase is the maximum the province allows universities to charge and still receive a one per cent increase in their annual operating grant from the government. An undergraduate science student (page 7) at Dalhousie already pays $8,939 a year — the highest tuition in the country. We’re Number One! 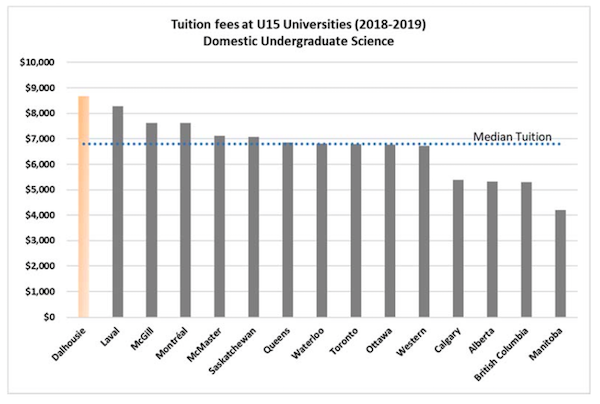 Undergraduate students who grew up in Nova Scotia pay $7,606, thanks to a provincial bursary aimed at keeping more locals from scuttling to Memorial University in Newfoundland or McGill University in Montreal, where tuition costs are substantially less. International students from out-of-country pay more than double other Dal students — $19,153.06 a year to enrol in a Bachelor of Arts — although most choose to enrol in programs such as computer Science, engineering, and science. Students in dentistry, law, and medical schools, where training costs are higher, could see even bigger tuition hikes.

Last year’s operating budget for Dalhousie University was $428.6 million. That’s more than half what it costs to run the entire Halifax Regional Municipality. And in terms of its impact on the provincial economy, Dal behaves more like a city than a university. Nearly 19,000 students attend 13 degree-granting programs spread over four large campuses. Nearly 1,000 professors are on staff and they can stay as long as they want since a 2009 court case that abolished mandatory retirement. In some faculties, 90 per cent of the department’s budget is spent on salaries and pensions.

Overall, financial compensation negotiated for the thousands of people who work at “Dal City” accounts for 74 per cent of the university’s total expenses. Administration costs appear to be running at just above six per cent, slightly below other Canadian universities of comparable size, although that Statistics Canada information is a couple of years old.

Dal’s ongoing  problem, as described succinctly in the preliminary budget documents for 2019-2020, is “projected operating costs increase at a faster rate than anticipated revenues.” Dal’s Chief Financial Officer Ian Nason estimates operating costs rise by three to four per cent a year; the bulk of that due to negotiated salary and pensions for staff and the rest tied to maintenance, equipment, IT, and utility costs. (One participant said there’s water in the basement of the Data Centre, which is the kind of thing that probably shouldn’t wait).

Although Dalhousie University attracts more than $156 million in research funding and can boast 91 Rhodes Scholars, none of that can be touched to pay the light bill. Last year, the university chose to balance the budget by ordering faculties and departments to cut their budgets by 1.5 per cent, while demanding students pay three per cent more for their education.

At yesterday’s forum hosted by Teri Balser, the Provost and chair of the Budget Advisory Committee, Balser noted that the MOU agreement between the universities and the provincial government expires at the end of March. That agreement has provided one per cent increases in the operating grant each year for the past five years. The agreement followed a three-year period during which university budgets were slashed by 10 per cent. Balser told the small audience “we are hopeful annual increases will go a bit higher” but with those top secret negotiations still underway, universities can’t count on more than the status quo. The preliminary budget report says “Continued advocacy for improved grant support is critical to fund University operations”.

Without that, Provost Balser told the group, “We are stuck with tuition as the only place we can bring in more money.”

Tuition increases raise revenue but also risk killing the goose that lays the golden eggs — higher enrolment. Since 2010, Dal has added 2,433 new international students. Twenty-two per cent of all students now come from outside Canada, with China and India sending the most students. Faculties such as Computer Science are “bursting at the seams” and about to hire half a dozen additional professors to meet the growing demand; enrolment in the School of Engineering and B.Sc programs are also increasing thanks to an influx of international students.

Since 2014, Dalhousie has seen a 40 per cent growth in international students. Even though the university charges these students twice as much as other Dal students, the fees to come to Dal are still  $8,000-$9,000 a year below the average that comparable Canadian universities charge, according to Statistics Canada data from two years ago.

The number of Canadian students attending Dal has remained stable. The influx of international students means the percentage of Canadians has dropped from 89 to 78 per cent over the past ten years. Canadian demographic trends show fewer young people are and will be graduating from high schools, which increases the competition among universities to replace bums in seats.

Ontario has been the province to send the most students to Dal and those attending the budget discussion believe the 10 per cent tuition cut announced by Premier Doug Ford will lead to fewer Ontario students coming east. Talk at the budget forum yesterday suggested “diversifying” recruitment efforts to reduce reliance on both Ontario and China as sources of more students.

Some at the session see boosting enrolment as a double-edged sword, questioning whether popular programs such as engineering and computer science should have their enrolment capped or limited. They note that these programs, which attract a high proportion of international students, are at a point where more must be spent to hire teaching assistants, professors, and language and counselling services to ensure students receive value for money. Other options might include expanding these popular programs and closing programs where enrolment is declining.

On the cost-cutting side, participants at the forum suggested the university use a few million dollars earmarked for short-term projects or “strategic initiatives” to offer buyouts to professors as an incentive to retire. Downsizing the number of tenured faculty at Dalhousie or replacing senior people with newer, less expensive professors is an obvious cost-cutting option but not one that came in for any serious or sustained discussion.