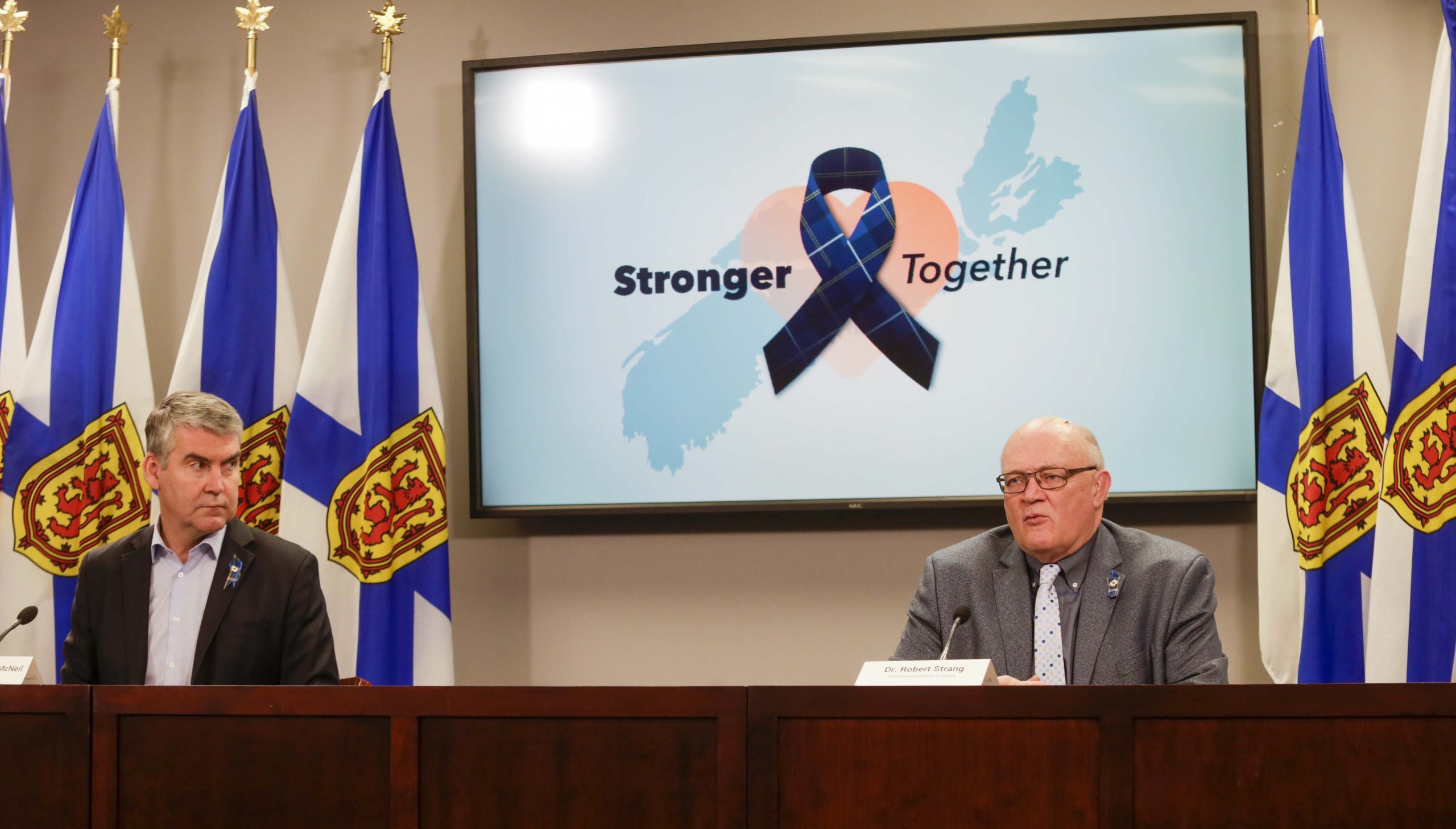 Three new COVID-19-related deaths were announced by the province on Tuesday, all having occurred at Northwood long-term care home in Halifax.

That brings the total number of deaths to 27. The province also announced 15 new confirmed cases of COVID-19, bringing Nova Scotia’s total to 915. Twelve people are in hospital, three of them in ICU.

The total number of recovered and resolved cases stands at 522 (or 57% of all cases), something the province’s chief medical officer of health Dr. Robert Strang described as good news. He also urged caution, noting that while we’re “making progress,”we’re not in the clear and it would be premature “to start to robustly lift our public health restrictions.”

In his opening remarks during Tuesday’s coronavirus briefing, Premier Stephen McNeil announced that all public schools and licensed child care providers across the province will now remain closed until at least Tuesday, May 19, after the May long weekend. These closures will be reassessed as the date approaches.

While addressing the current situation in the province with regards to the number of COVID-19 cases, Strang said there’s still a “significant amount of virus activity” in the province, and it would be “absolutely premature for us to open things up significantly at this time, or even in the next couple of weeks.”

He added that any decisions must be based on Nova Scotia’s epidemiological data, not on what might be happening and/or leading to an easing of restrictions in other provinces or countries. He reiterated a point he’s made several times in recent weeks, noting that any easing of restrictions “will be a very phased and slow process.”

On April 6, Strang suggested the province could see a peak of COVID-19 cases sometime around the end of April or beginning of May. On Tuesday, he was asked if we’d yet hit that peak.

“We may well have had the peak at about the time we said, within the last week or two,” Strang said. “We have to watch that very carefully though, a peak may not be just one very defined distinct piece, a peak can be quite jagged with some ups and downs and can go on for a period of time.”

The premier was asked if he believed the province should follow Ontario and Quebec’s lead in offering the “pandemic premium” — additional hourly pay —  to frontline health care workers in long term care homes, group homes, home care and homeless shelters. Both those provinces have approached the federal government for assistance to increase frontline workers’ pay.

“If you look at the national government’s program, it really disqualifies most of our health care teams because…the threshold was below what they are currently making,” McNeil said. “But I’ve said to the national government if they want to make a top up to health care workers in our province or to essential service people in the province, we would thank them for that.”

There were a handful of questions about the new $380 million loan program for municipalities announced Tuesday.

McNeil was asked why it’s in the form of a loan instead of a grant. He said the province would have a better borrowing rate than the municipalities would get from a lending institution, adding that some may not even qualify. He said the Federation of Nova Scotia Municipalities worked collaboratively with Chuck Porter, Minister of Municipal Affairs and Housing, to create a plan “that made sense.”

Late last week, residents of a Halifax homeless shelter were provided hotel rooms after one resident tested positive for the virus. On Friday, Strang mentioned there’s “quite possibly COVID virus circulating through that population.”

During Tuesday’s briefing, the Halifax Examiner asked if consideration was being given to also moving the other homeless shelter residents to hotels, and if he would elaborate on the testing regime currently in place at homeless shelters.

He started by thanking Mobile Outreach Street Health (MOSH) clinic, which has been doing the bulk of the testing. Addressing the testing regime, he had this to say:

We started as we always do with a case and then their known contacts and that included residents and staff in a couple of shelters. But because there’s lots of movement of people between shelters we have expanded that testing so now we’re in the process of testing residents and staff throughout the HRM area in terms of all the shelters, and so far fortunately as of today we haven’t had positives come back but there’s a number of individuals we continue to test and wait for their results.

Regarding the question about moving other homeless shelter residents to hotels, Strang said the first step was to get hotel space for those who needed it — the person who tested positive and their close contacts — so they could be isolated until they are no longer infectious and able to spread the disease. He continued:

We do know that at the end of the day that shelter environments are a significant risk for spreading any kind of infectious disease because of close quarters and the very significant challenges around maintaining things like social distancing and hand washing, and there are certainly discussions going on about how we can do a better job supporting the homeless population in general, minimizing their risk of being exposed to COVID-19.

The Halifax Examiner asked McNeil if the mass murders of April 18-19 had been referred to the Domestic Violence Death Review Committee, and if not, why not?

McNeil seemed unaware of the committee, which his government created last October, so did not directly address the question. McNeil instead said there’s been “ongoing work” with Kelly Regan, Community Services Minister and the Minister responsible for the Advisory Council on the Status of Women Act, as well as Justice Minister Mark Furey “dealing with this very serious issue in our province.”

“It is unacceptable. I’ve said this many times, that women and children are feeling afraid and frightened and afraid for their own lives in their own homes. For many of us, it’s a sanctuary where we find comfort and love and caring. But far too many Nova Scotians do not feel that way,” he said.

“And both of those departments are working hard not only inside of our province, but with our national partners to ensure that we can continue to shine light on this at the same time as we stand up and predominantly tell our sons violence is not acceptable in any way, and that we as a society have had enough and we’re not going to tolerate it anymore and put in place public policy and protocols to ensure that we deal with this hideous crime.”