You are here: Home / Featured / Daily COVID-19 update: supporting the propertied class in their time of need, with more indebtedness for small business owners 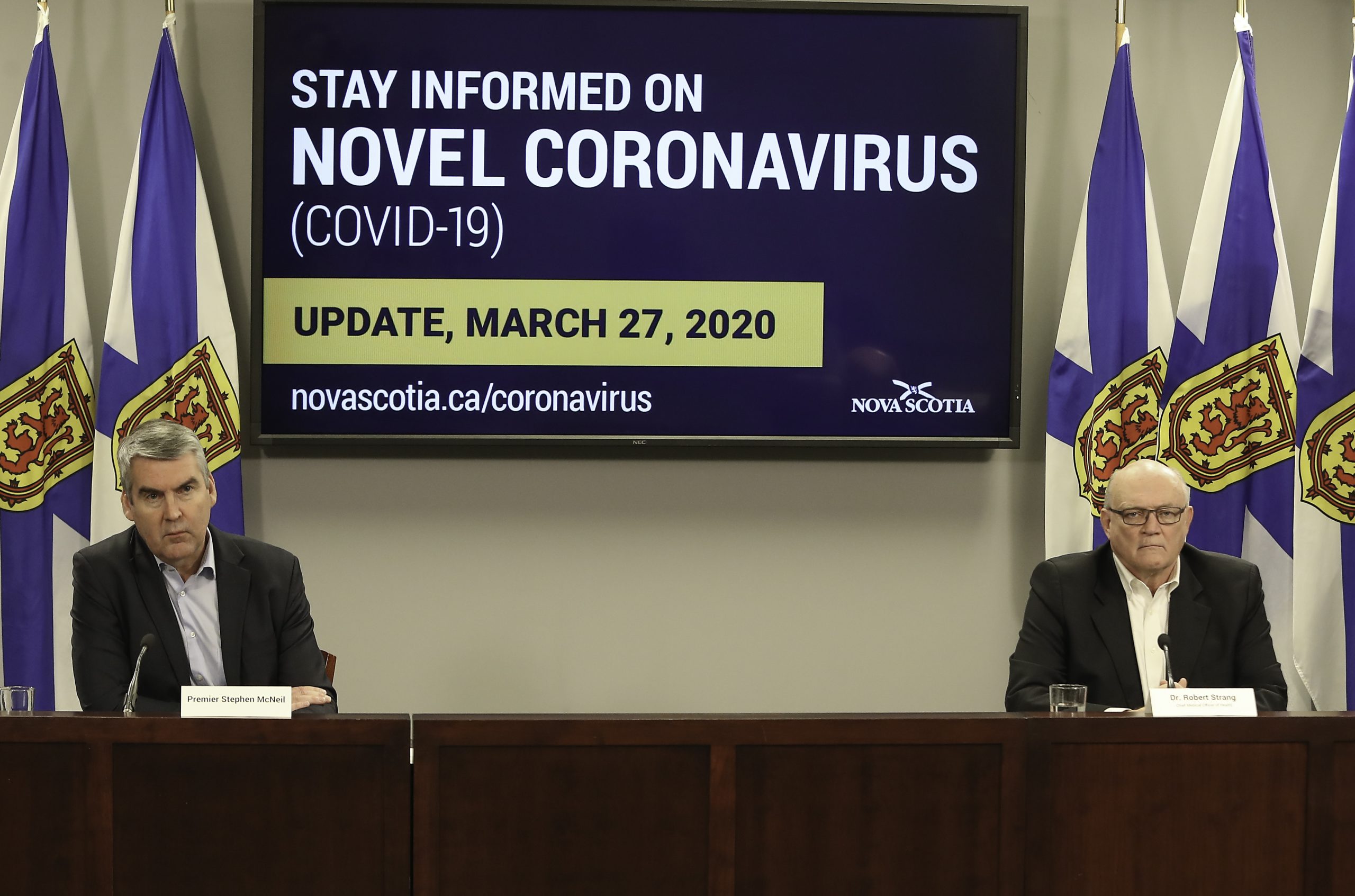 The province’s chief medical officer, Dr. Robert Strang, announced 17 new cases of COVID-19, bringing the total in Nova Scotia to 90. Of the 90, two people are in hospital, and three have recovered.

The investigations into all of those 17 new cases are not complete, but so far, said Strang, for the completed investigations, they are either travel-related or related to previous cases. As there are ongoing investigations, “it remains too early to say if there may be community spread.”

However, none of the new cases are associated with the St. Patrick’s Day party in Lake Echo. Strang said that all the attendees of the party have been identified and are being tested.

People who were present at those locations on the specified dates are asked to monitor for COVID-19 symptoms.

“People who may have been exposed on these dates are just past the 14-day period where they should self-monitor for signs and symptoms of COVID-19. If you were at those locations and you have developed any symptoms of COVID-19 since then, please call 811. This will help us to identify any connected cases and will aid our containment efforts,” said Dr. Daniela Kempkens, Regional Medical Officer of Health.

Strang implied that there are two different people who tested positive, and one visited the eye clinic while the other was at the hockey tournament. He said that close contacts with each one have been identified, told to isolate, and will be tested, but NSHA is taking the “extra precaution” of alerting the public in case other people are infected.

We are announcing a rent deferral program for small businesses operators who were forced to close under the public health order. Landlords will be asked to sign a rent deferral agreement, and government will guarantee up to $5,000 a month if that business goes under.

The hope here is that these businesses will be able to come back even stronger, but if not, we want to reduce the risk on the landlord.

If that is not possible, at the end of the lease our government will guarantee that three months.

In response to a question from Keith Doucette of the Canadian Press, McNeil elaborated:

What we were looking uniquely at Nova Scotia, we have tremendous commercial developers here, commercial lenders who have restaurants, bars, salons, small businesses in them. This program is directly targeted to them. Many of them have multi-use businesses. For example, one part of their building might be open, but another part closed.

What we wanted to have for those commercial developers, to say to their small business, is defer their rent — let them defer their rent, we will backstop you to take away any risk from you. We want you to work with them over the course of their rent, the remainder of their lease, to have them pay that back, and if they don’t, we will be there as the government.

Our number one goal is to have these employers in a position to come out of this strongly as soon as public health gives us the word to open up our economy again so we can take off, particularly on the service side.

We are reaching out to the various organizations now. The Minister of Business, Minister Maclellan, has been handling this file, along with his deputy. They’ve been in contact, and have been out through that.

I was the next reporter given the opportunity to ask a question, and here’s my exchange with the premier:

Bousquet: On the rent deferral, I’m understanding that you’re guaranteeing essentially a loan to small business people. Do you have terms for that? And doesn’t that in effect, isn’t that a transfer of wealth post-crisis from the small business person to the landlord?

What we’re saying to the commercial landlords for doing that, is if this business fails and can’t afford that, we will make sure that we cover the three months that we’ve asked you to defer.

We believe this provides some security for the commercial lender to be able to do that, especially those that have a diversified portfolio — more than one business in a particular footprint — and it also provides that small business owner now, cash at hand to be able to be able to move and get prepared for opening, and then to work out terms.

We believe that the vast majority of these businesses will stay in business, is our hope, and this program is one to tell them we have the confidence in them and also tell the commercial lenders to work with their tenants and we will be there.

Bousquet: I’m just going to press you on that, premier. What you’re saying is that the landlord is guaranteed $15,000, with government backing, and the small business, maybe if they survive, will be carrying that on as a loan into the future on uncertain terms, and maybe they won’t survive. Why is it that the landlord should get the guarantee, and not the small business?

McNeil: Well, the reality of it is that the landlord is owed rent on April 1. So what we’re saying is leave that rent in the hands of the small business owner. That’s exactly what this is. It’s actually for leaving capital and cash in the hands of a small business operator for three months and deferring an expense that they would have had to pay. It is taking something off their balance sheet.

They will of course have to pay that back. They will have to work out an arrangement on their lease, just like they would and all of us would who rent from someone, work with the terms of how you would pay back any deferred rent that you would owe.

From the start, I’ve feared that this crisis will be used by capitalists to effect a huge transfer of wealth from working people and the shopkeeping class to the already wealthy. Plenty of people who can’t now work, or can’t open their shop, must still pay utility bills, rents, etc. There’s no income coming in during this period, so the payments will stacked into the future, on who knows what terms, such that the rentier class is kept whole, losing nothing.

There’s literally no risk at all to the landlords. Capitalists come out of this wealthier, while the rest of us will be poorer.

Fifteen thousand dollars isn’t much to, say, Louis Reznick or George Armoyan, but ask a restaurant owner what being saddled with $15,000 in new debt means to them.

While people can’t work or operate their business, what’s needed is a pause in all rent and mortgage payments. Not a deferral, not a loan, just a wiping away of all rents and mortgages for three months. Nothing at all should be paid until the economy gets up and moving again. Believe me, the lending banks can take the hit, and even if they can’t, we all know the government will bail them out directly with cash transfers or indirectly with financial wizardry.

I realize McNeil probably doesn’t have the power to order a pause in rent payments, but the federal government does. And meanwhile here’s McNeil’s cabinet minister meeting with whom? Not workers out of jobs, not shopkeepers, but “the various organizations” representing “tremendous commercial developers here, commercial lenders.” And “this program is directly targeted to them.”

Other announcements made today:

• The Department of Community Services is buying 100 phones at a cost of $50,000, and Telus is providing $5,000 in data minutes per month. The phones will be distributed to people who don’t otherwise have phones;