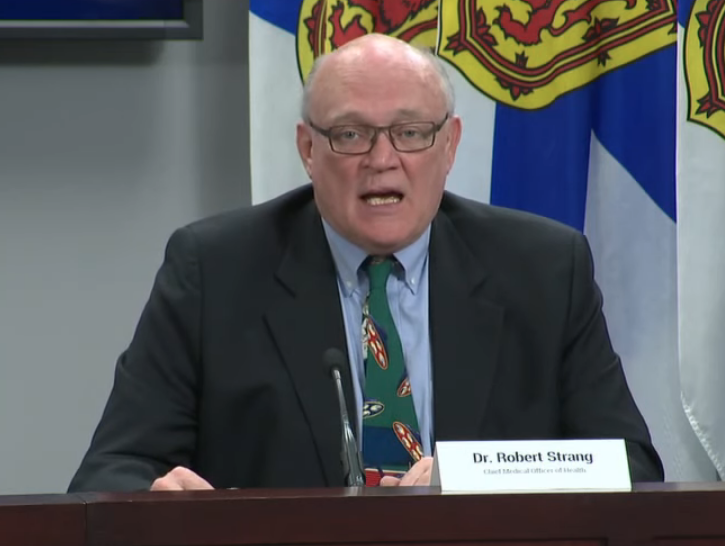 Thirty-one new people have tested positive for COVID-19 in Nova Scotia, bringing the total to 293. Nine people are currently hospitalized (one person previously in hospital has gone home); 64 people have fully recovered.

The Examiner has graphed the spread of the disease in Nova Scotia, and the response to it, here.

Today, Dr. Robert Strang, the province’s chief medical officer of health, announced that travel is no longer a requirement in the screening assessment. The 811 screening page has been amended to set just two requirements needed for further assessment for possible testing:

Strang also announced that suggested protocols in long-term care facilities have now been incorporated as orders in a new directive. 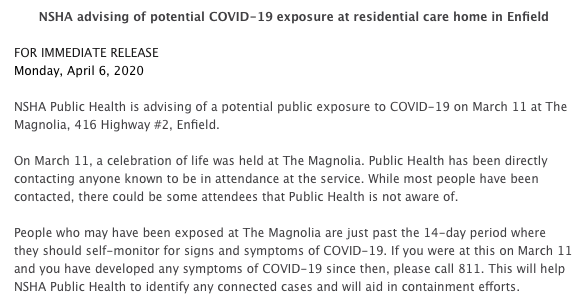 Strang was asked about when Nova Scotia can expect to see a peak in COVID-19 cases, and what will things look like after that peak is reached. His response:

So we’re looking at the curve in Ontario and comparing ourselves to Ontarios, BC, Alberta, Quebec. We’re two to three weeks behind them, and that remains the same. So we expect we’re probably going to be getting our peak towards the end of April. I keep saying how big that peak is, how dramatic it is, it’s all up to us, the things that we’ve been talking about every day at these briefings.

I do want to make the point, though, you don’t just turn the switch back on and life is normal in an event like this. We fully expect that with this wave it is a full at least eight to 10 week period, and even though you hit a peak, you’ll slowly decline from that with a lot of disease activity but you can watch that carefully and then slowly loosen up some of the restrictive measures we have in place. But that doesn’t happen quickly. In fact, there’s lots of evidence that if you loosen up too quickly then you’re going to have the peak coming right back at you again.

So this is a longer term issue. It’s all based on a combination of strict public health measures, good testing with rapid follow up with cases and their close contacts. That’s what works to minimize this, but it’s not easy work and there are no quick solutions here.