You are here: Home / Featured / Daily COVID-19 update: Is the disease spreading in nursing homes because they don’t pay workers enough?

A Cape Breton woman in her 80s died from COVID-19 today; she is the fourth person in Nova Scotia to die from the disease. She had underlying health issues.

Today, the premier extended the State of Emergency two weeks, to May 3. The Emergency Measures Act only allows for two-week declarations.

Also today, the Nova Scotia Health Authority (NSHA) issued another advisory about potential exposures to the disease in Dartmouth:

NSHA Public Health is advising of potential exposure to COVID-19 at the following locations in Halifax Regional Municipality:

• Giant Tiger, 114 Woodlawn Rd, Dartmouth on April 13 from 10:30am to 12pm. It is anticipated that anyone exposed to the virus on the named date at this location may develop symptoms up to, and including, April 27, 2020.

• Bob’s Taxi, based in Dartmouth, on April 4 – April 15 from 10am to 1pm. It is only one car of the cab fleet for which a confirmed exposure has been identified. Precautions were taken by the driver during this time. It is anticipated that anyone exposed to the virus on the named dates may develop symptoms up to, and including, April 29, 2020.

While the deaths are tragic, the disease’s impact on the health care system has been limited. As the crisis was beginning the hospitals were preparing to be overwhelmed by COVID-19 patients, and so started moving as many patients out of the facilities as possible, to make room. As Jennifer Henderson reported on April 2:

[T]here has been significant movement of people out of hospital over the past month. Late last week, NSHA CEO Dr. Brendan Carr said hospitals across the province were at 70% occupancy when usually at this time of year they would at 100% capacity. Those reductions came mostly from cancelling surgeries and elective procedures, Carr explained, although 42 patients have been transferred to nursing homes in the past three weeks.

The Health Authority CEO said 122 beds in Intensive Care Units (ICUs)  across the province are currently standing at 50% capacity in preparation for an anticipated surge of COVID-19 admissions two to three weeks following travel from March break.

Also in anticipation of that surge, NSHA prepared a plan to repurpose facilities and otherwise improvise to bring the potential number of ICU beds to the 190-200 range.

But that surge didn’t happen. There are today just five people with COVID-19 in ICU, and even the worst case scenario as envisioned by the modelling released Tuesday shows that at the peak of the disease, only 85 people with COVID-19 will be hospitalized at any given time, and only about 30 of those will be occupying ICU beds: 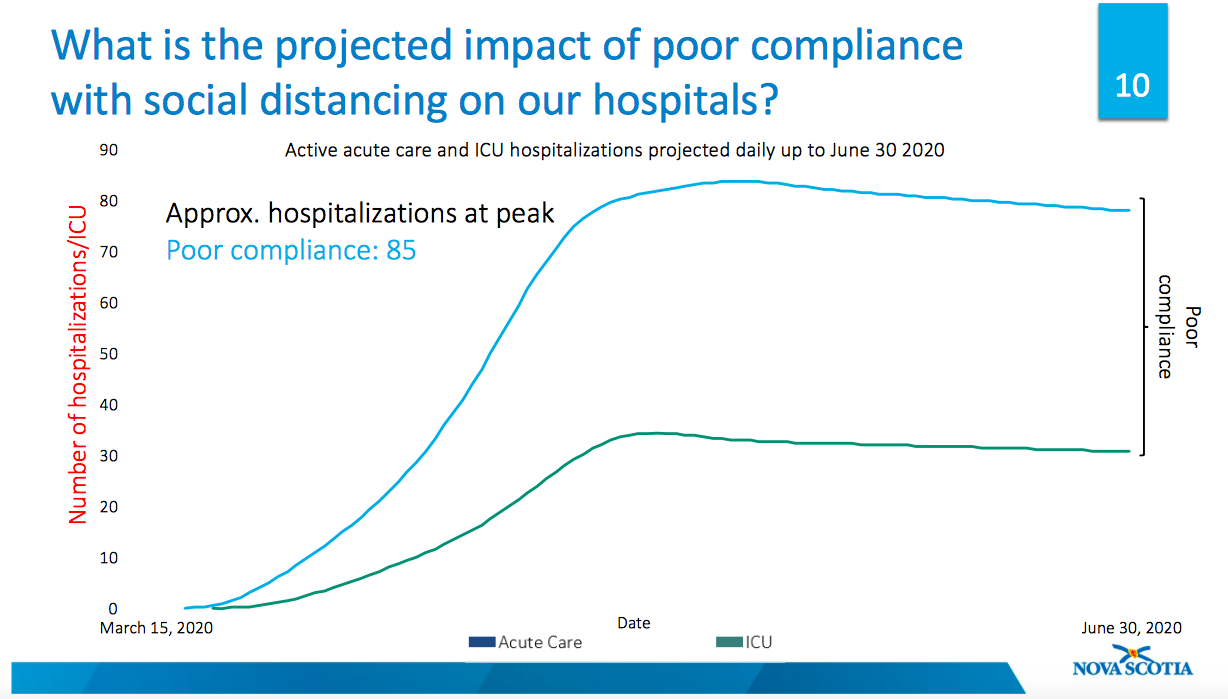 This is good news, but I wonder if we might be unreasonably endangering others. The elective surgeries and non-urgent procedures that were cancelled or postponed to make room for the expected surge of COVID-19 patients include people in pain, and some of them might die.

A hip replacement, for example, isn’t considered urgent, but the ongoing pain is first of all miserable, but might also aggravate other illnesses. And some percentage of people — small, for sure, but some — are discovered to have fatal illnesses when they go to their routine doctor’s appointment, or when having other procedures performed at the hospital. Putting those appointments and procedures off for a couple of months might lead to a significant increase in non-COVID-19-related mortality.

I’m trying to do more reporting on that issue, and hope to have some answers soon, but in the meanwhile, today I asked Dr. Robert Strang, the province’s chief medical officer of health, if given the relatively low number of COVID-19 patients in hospital, it might be time to begin rescheduling elective and other non-urgent hospital procedures. He answered:

That is certainly an issue the health authority can look at. I think we need to remember that we don’t want to start making changes prematurely. The modelling is numbers that gives guidance — they’re not numbers that you can hold anyone to, a firm number.

I think the point where we know, based on the modelling, as long as we stay to the scenario where we’re having strong adherence to our public health measures, that even though if there is a surge of cases, we should be able to manage those people who are hospitalized and in ICU within our existing capacity within the health system.

As I said yesterday, that would stretch us, because there’s still a lot of other health care needs that need to be managed. We have trauma that’s going to happen. We have people with cancer or necessary and other urgent surgeries that need care.

We have to watch — we have a few more weeks before we can confidently say that we have hit our peak and start to go down. So it is something that needs to be looked at as part of — we talked a lot about how we start to relax some of the public health measures, but along with that is the folks in the health care system who are in charge of delivering health care, how do we slowly start to return to normal. But we need to make sure we don’t do that prematurely and put us in a situation where we start to open up the health care system and all of a sudden we have a surge of COVID-19. 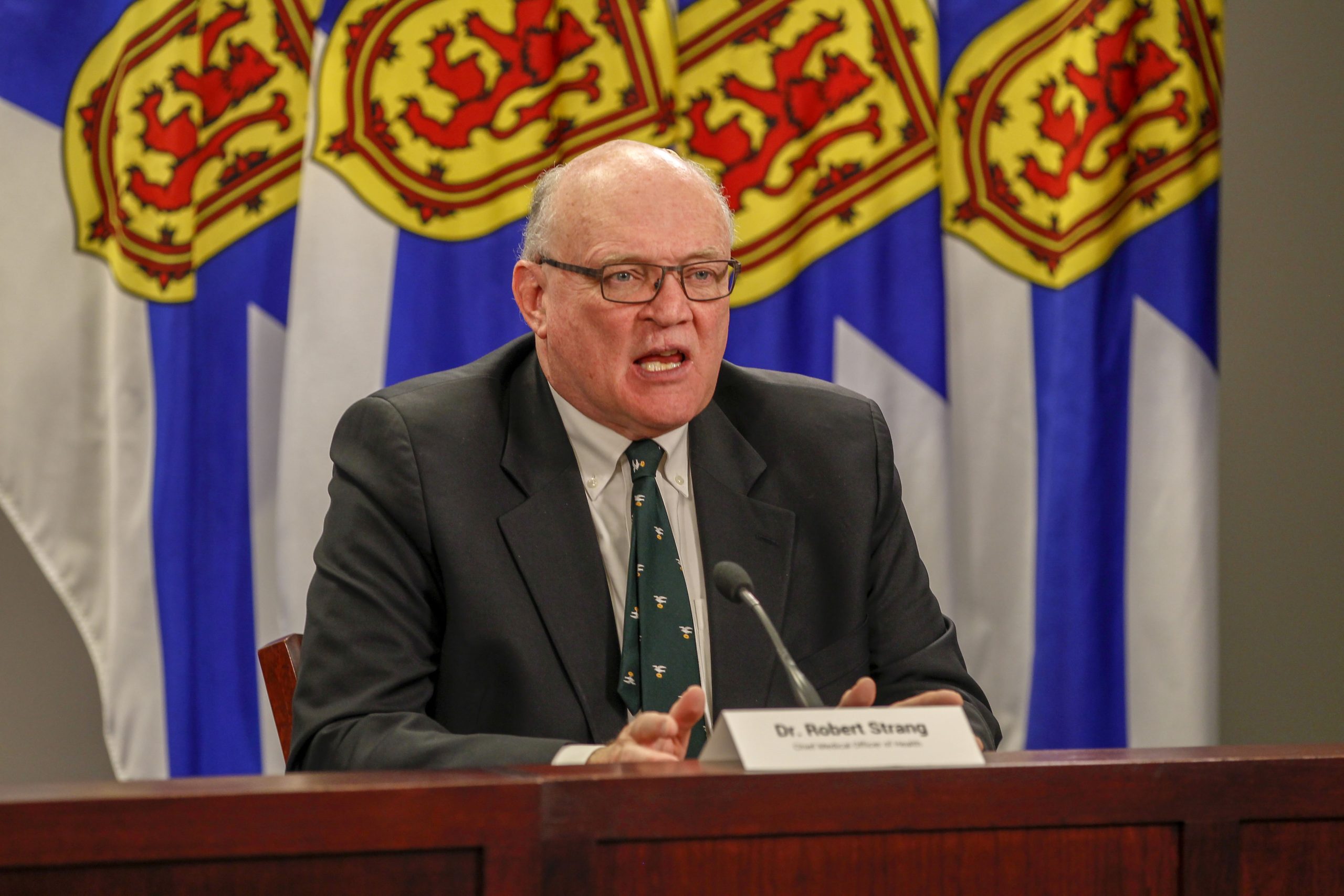 The Department of Health today released updated figures for COVID-19 infections in eight long-term care facilities — 98 people associated with the homes have tested positive. That figure includes 55 residents and 43 staff.

The long-term care numbers are not directly correlated with the daily totals issued by the Department (cited at the beginning of this article), as the reporting periods are different. So it’s confusing that 33 new cases were reported in nursing homes today, but only 27 new cases were reported province-wide, including in nursing homes. Strang said that health authorities are working at developing a more consistent reporting system.

Still, there’s no doubt that nursing homes are a significant concern — reporting issues aside, somewhere between 15 and 20% of all cases are in nursing homes, and that percentage is increasing daily.

My colleague Jennifer Henderson is doing more in-depth reporting on nursing homes, but while I had the opportunity, I wanted to ask Strang or Premier Stephen McNeil about the movement of continuing care assistants (CCA) between facilities. The concern is that a CAA will unwittingly bring COVID-19 from one facility to the next. Our exchange:

Bousquet: It seems the major concern right now and the weeks coming forward concerns the long-term care facilities. British Columbia and Ontario have prevented workers from going between facilities, but I’ve noted that Dr. Strang’s order from April 11 (see here, page 9) allows, and in fact says it’s necessary in order to fully staff some of these facilities.

It occurs to me, and talking to folks that work at some of these facilities, that the workers simply — they’re working in different places because they can’t afford, or they aren’t offered the opportunity to work in one place. So my question is: Is this crisis in some way aggravated right now because our long-term care facilities have been going on the cheap for so many years, in not fully employing people and giving them well-paying jobs, and as a result they’ve had to work in multiple facilities?

Strang: It’s a complex staffing issue. I can’t speak to some of the long-term pieces.

I do know that as we work in this current situation, clearly, the more we can keep staff working in one facility, the better. And that is one of our objectives. But we do know that if we are not in a position to be completely directive on that like some other provinces because it’s always in finding the balance. We need people to be in facilities to provide the necessary care.

But one of the key things we have done is that when there’s an outbreak in long-term care, it always creates staffing challenges, we’ve said staff that are identified as close contacts, that they can come back and work if they test negative, they wear masks, their temperature is taken every day, there’s strict protocols for them. That is simply a way to make sure that as much as possible, people who work in those facilities can continue to work in those facilities, minimizing the need to bring people from other facilities.

Because we recognize that people moving across facilities is always a chance to spread the virus. So we’re doing what we can do within some of the limitations of our HR issues in the long-term care sector, to keep people in one facility.

That might’ve been a good answer to someone else’s question, but not to mine.

Oh, by the way, Northwood is hiring. As of yesterday, at the Halifax complex, 42 residents and 26 staff have tested positive.