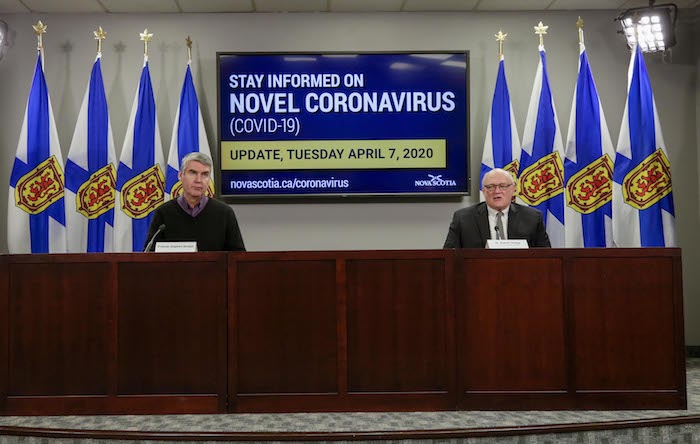 Nova Scotia has had its first death from COVID-19, a woman in her 70s who is described as having underlying medical conditions. She died in hospital in the Nova Scotia Health Authority’s Eastern Zone.

The Examiner has graphed the spread of the disease in Nova Scotia, and the response to it, here.

COVID-19, the Prestons, and government response

As well, 17 new people have tested positive for COVID-19 in Nova Scotia, bringing the total to 310. Eleven people are currently hospitalized; 66 people have fully recovered.

In the province’s previous COVID-19 daily press conferences, we have heard about the importance of preserving privacy, of not stigmatizing communities, and of the public not lashing out at businesses or other places where the virus has been identified.

All of that seemed to go out of the window on Tuesday, when both Dr. Robert Strang and Premier Stephen McNeil took aim at Black communities that have been identified as having infections.

When it was largely white people with money to travel who were returning to the province, we heard about confidentiality. When it was a St. Patrick’s Day party, we were carefully told that the information was only being made public to help identify cases and that we should not lay blame.

But now that Black communities also have virus spread, the tone has changed.

In the beginning of the briefing, Dr. Strang spoke about communities that are currently dealing with infection. While he mentioned Elmsdale and Enfield, the majority of his comments were reserved for the Preston area:

We have established temporary assessment centres in communities where there’s concerns about increased activity. We opened one up in Elmsdale and Enfield on Sunday. Today we are opening up a temporary assessment centre in North Preston. There are concerns about increased disease activity as well as the patterns of how the disease is being spread and underlying issues in these communities of North Preston, East Preston, and Cherry Brook that we need to understand more, and going in with a temporary assessment centre is part of working with the community to help understand those issues. We’re working very closely with community leadership and community leaders in these communities. They share the concerns and have their own concerns and we’re working very collaboratively to understand this issue.

Until only days ago, all the cases in the province were linked to travel. Yet in Strang’s comments, it has become Black people in  their own communities who are responsible for spreading disease. Black people are spoken about as the ones who contaminate everyone else. The implication here is that if Black people are not contained, we go out and get white people sick.

Notice that these communities are “very concerning” not because of how the virus impacts the Black people struggling with illness, but only because of its effect on the “broader community.” Just like the public in the “public safety” enforced by police, this “broader community” is imagined to be white.

We have been hearing for weeks about cases in health care facilities. But now, rather than it being dangerous work on the front-lines of disease that brings infection into Black communities, Black people are described as the originators of the problem. Our communities are irresponsible and now we got the people who matter sick.

This line of thinking draws very closely on ideas of racial hygiene, where the “lower races” contaminate white people. Black people must therefore be controlled, disciplined, and segregated to prevent us from spreading disease. Whether through whites-only bathrooms and drinking fountains, or fears of miscegenation (the mixing of races), in this ideology Black people, our bodies, and our sexualities must be carefully policed.

Along with the discourse of Black people as the vectors of disease, Black people are described as “willful,” bringing to mind Rudyard Kipling‘s characterization of the “white man’s burden” governing “sullen peoples…half devil and half child.”

At the end of the press conference, McNeil put on his fed-up-Daddy voice to again scold Black people. After bringing up the lines outside Costco, McNeil continued:

We are not in the business of calling companies out or communities but today we have to…its not just shopping now unfortunately. We are now focusing on communities that we deem to be hotspots. We don’t know yet but we have mobile units testing. They are in Enfield, and they are in East and North Preston.

And while we are using resources, doubling down on testing, and trying to keep people healthy, the reckless and selfish few in these communities are still having parties. I can’t even believe that after everything we’ve been talking about, some of you think its okay to have a gathering or a party. You are not only putting yourself at risk, you are putting everyone in your community at risk. And some of them work in our hospitals and long term care homes.

If they become infected and are not aware they’re carrying the virus, they go to work and infect someone else. Somebody more vulnerable than you. Before — but if you’re listening, know that every party you show up at and every get together you go to could kill. You might not get sick as Dr. Strang just explained, but someone in your family, our your neighbourhood, or the health care worker down the street who has to go to work every day to protect us has no protection against you.

Because you are the reckless and selfish you do not listen and won’t stop partying. Well think about this as you are planning your weekend: there’s a Nova Scotia family planning life without their loved one because of this virus. This virus kills and the only way we can kill it is if we keep our distance from one another. And for the love of God, stay home and stop partying, please, for the sake of our province.

McNeil has to know the stigma and racism that is directed at African Nova Scotian communities. He is making the choice to characterize people in these communities, repeatedly, as “partying” and as “reckless and selfish.” Coupled with Dr. Strang’s comments, it is clear who McNeil is really talking about. No other causes of spread are even considered.

What is reckless is the province not having any plan for African Nova Scotian communities to fight COVID-19 despite the reality that race and poverty worsen health outcomes. Evidence now emerging from the United States shows Black people are hit dramatically harder than other groups.

The province made no effort to keep race-based statistics, to develop public education campaigns directed at African Nova Scotian communities, to work with communities before there was spread to make sure people in rural areas were getting information, or to proactively send public health workers in before there was a crisis.

The province has not had any plan for generations to relieve the centuries of racism that leave African Nova Scotian communities without resources, without equal health care access, and in poorer health. They have not put grocery stores in our communities so we can get affordable produce. They have not created jobs. They have not invested in our youth.

And now that, predictably, a disease that is hitting every community is also hitting African Nova Scotian communities, they have chosen to lay blame on Black people, to treat our communities as a threat to other communities, and to shame Black people publicly.

When he was asked about policing and how enforcement measures would affect the Black community, McNeil claimed that the virus was colour-blind:

Well, the virus doesn’t discriminate. The virus is after all of us. Frankly, we have to assume that all of us are carrying the virus. Regardless of which community you come from, how long you’ve been here is irrelevant. The reality is each of us has to stay home, and law enforcement has a responsibility for those who choose not to to enforce the law. And we expect them to enforce the law regardless of who it is who is on the streets ignoring the public health order.

When we are being profiled and victimized by the police, McNeil tells us he doesn’t see race. But when we are struggling with infection, all of a sudden Blackness is explicitly singled out. We are not spoken about as people who need more help or protection, but as people who are endangering everyone else and need to be disciplined. Suddenly what community you’re from does matter. Suddenly, we aren’t all carrying the virus equally.