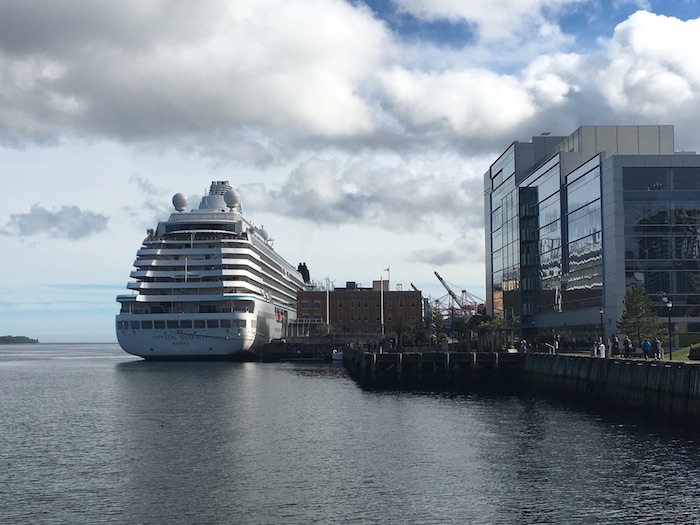 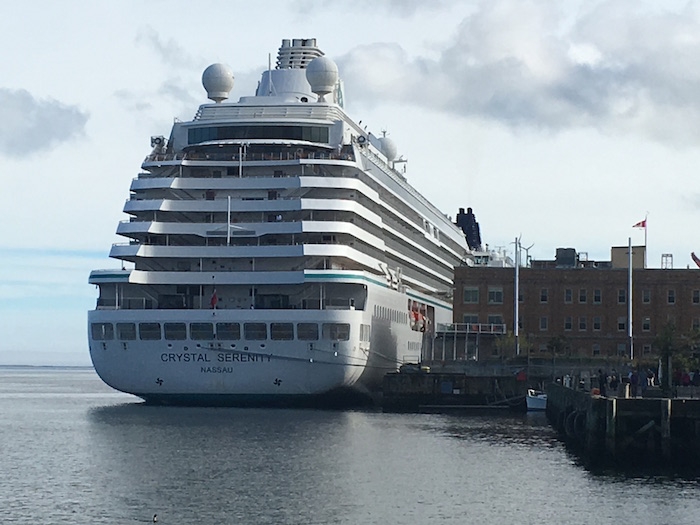 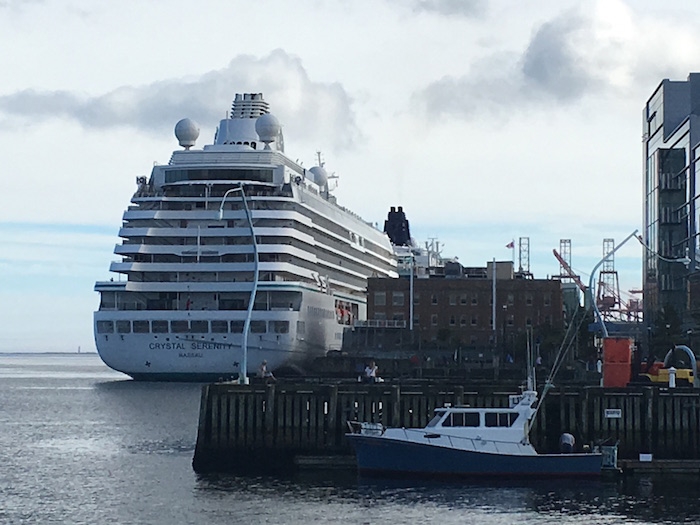 Yesterday, the cruise ship Crystal Serenity was in town. In 2014 I wrote:

It has been awarded an “F” grade by Friends of the Earth, which comments:

Crystal Cruises is a subsidiary of a Japanese shipping company founded in 1998 with its headquarters in California. Crystal operates two cruise ships worldwide—the Crystal Serenity and the Crystal Symphony—which are designed to carry between 1,500 and 1,700 passengers and crew. Crystal ships were banned from entering the Port of Monterey, California for 15 years after one of its former ships, the Crystal Harmony, discharged untreated graywater, treated sewage and oily bilge into the Monterey Bay National Marine Sanctuary in 2003. These discharges were made despite the company’s promise not to discharge any wastewater into the Bay.

Currently, neither of Crystal’s two cruise ships has installed an advanced sewage treatment system, resulting in a grade of F for the company’s 0 percent sewage treatment score. In determining the air pollution reduction grade for each cruise line, only ships that dock at a port that currently has shoreside power facilities (thereby avoiding burning dirty fuel in port) were considered. In total, none of Crystal’s ships that dock at a port with shoreside power are plug-in capable, giving the company an F in this category. While both Crystal ships traveled to Alaska from 2010 to 2012, it chose to discharge sewage from those ships outside of Alaskan waters, thereby avoiding Alaska’s strong water quality standards, giving it an ‘N/A’ for water quality compliance in Alaska.

And last month I noted: 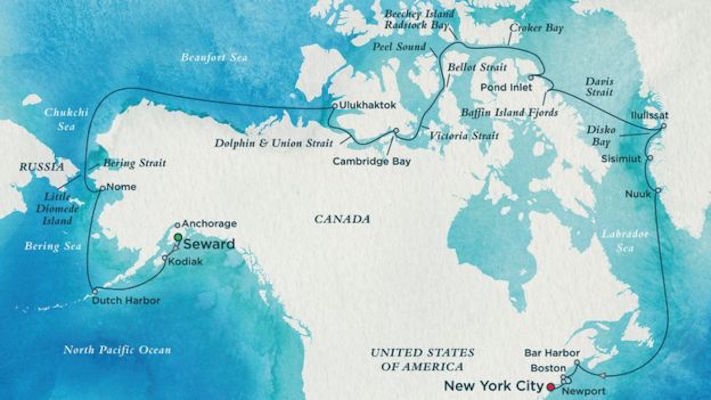 The cruise ship Crystal Serenity left Nome, Alaska yesterday, the first leg of an unprecedented cruise through the Northwest Passage. The ship left Seward, Alaska Tuesday, and stopped at Kodiak Island and Dutch Harbor before yesterday’s layover in Nome. After Nome, it has two stops on Victoria Island — Ulukhaktok in the Northwest Territories and Cambridge Bay in Nunavut — then on to Pond Inlet on Baffin Island. Having cleared the Passage, Serenity will visit three communities in Greenland — Ilulissat, Sisimiut, and Nuuk — the head south, bypassing Halifax for Bar Harbor, Boston, and Newport before finalizing the voyage in New York.

The cruise raises all sorts of environmental issues, which were highlighted when Crystal announced that it had secured the services of the British government’s research ship, RRS Ernest Shackleton, an icebreaker, to escort the Serenity through the Passage:

“There is a significant tension between the science and environmental mission of the Shackleton and its participation in an exercise in tourism that has an enormous per capita carbon footprint,” Prof Michael Byers from the University of British Columbia told BBC News.

Prof Byers, who holds a chair in global politics and international law, was invited on the trip to give a series of lectures to passengers. He refused, as he believes this summer’s trip will only encourage others.

“This voyage is a significant contribution, at least on a per capita basis, to climate change by people who are going to see an ecosystem before it is destroyed by climate change. I find that irony quite terrible,” he said.

Arctic cruises are nothing new — the Rotterdam, in port today, has just traversed the North Atlantic with stops in Qaqortoq and Nanortalik in southern Greenland — but the scale, cost, risk, and sheer outrageousness of the Serenity trip through the Northwest Passage should cause us to take note: the planet is changing in irreversible and cataclysmic ways, and the rich are playing.

Assuming it doesn’t hit an iceberg and sink, after the Arctic tour, the Serenity goes back to the mundane Eastern Canada milkrun, leaving the very next day, September 17, on an eight-day excursion to Quebec City. It stops in Halifax on September 20. Prices for that tour start at a comparatively affordable $2,910.